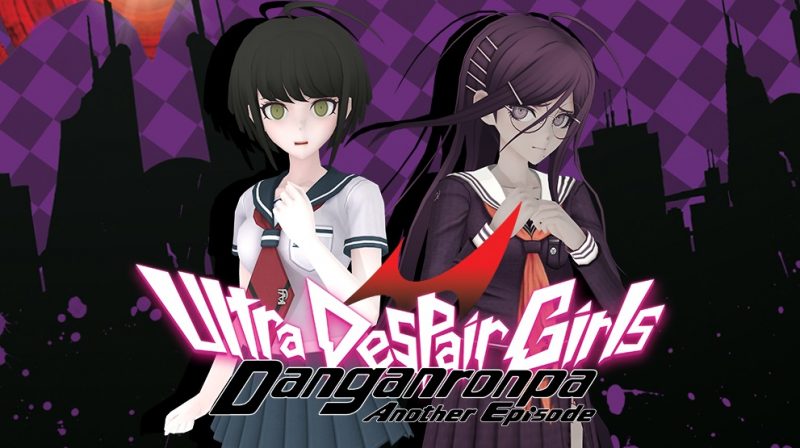 While I’ll confess to showing up fashionably late to the blood-soaked party, the Danganronpa series is one that’s quickly become a favorite of mine. And honestly, how couldn’t it? As a big fan of the Ace Attorney games and good old-fashioned horror, Danganronpa’s twisted blend of murder mysteries and over-the-top courtroom drama, where captive high school students litigate for their lives for the amusement of a sadistic, animatronic murder-bear, just resonated with me perfectly.

Danganronpa Another Episode: Ultra Despair Girls is pretty big departure from series norms. This PS4 port of the 2015 Vita game from NIS America and developer Spike Chunsoft ditches the courtroom antics found in Danganronpa: Trigger Happy Havoc and Danganronpa 2: Goodbye Despair, instead tossing players into the pearly-white loafers of Komaru Naegi and her unlikely ally, the demented Toko Fukawa in a game that straddles the line between third-person shooter and survival horror.

Fans of the series may be hesitant to see such a narrative-focused franchise make the jump to a trigger happy action title. But don’t count Ultra Despair Girls out so fast – It’s a surprisingly addicting romp that perfectly captures the dark and quirky nature of its source material while providing some exceptional character development. 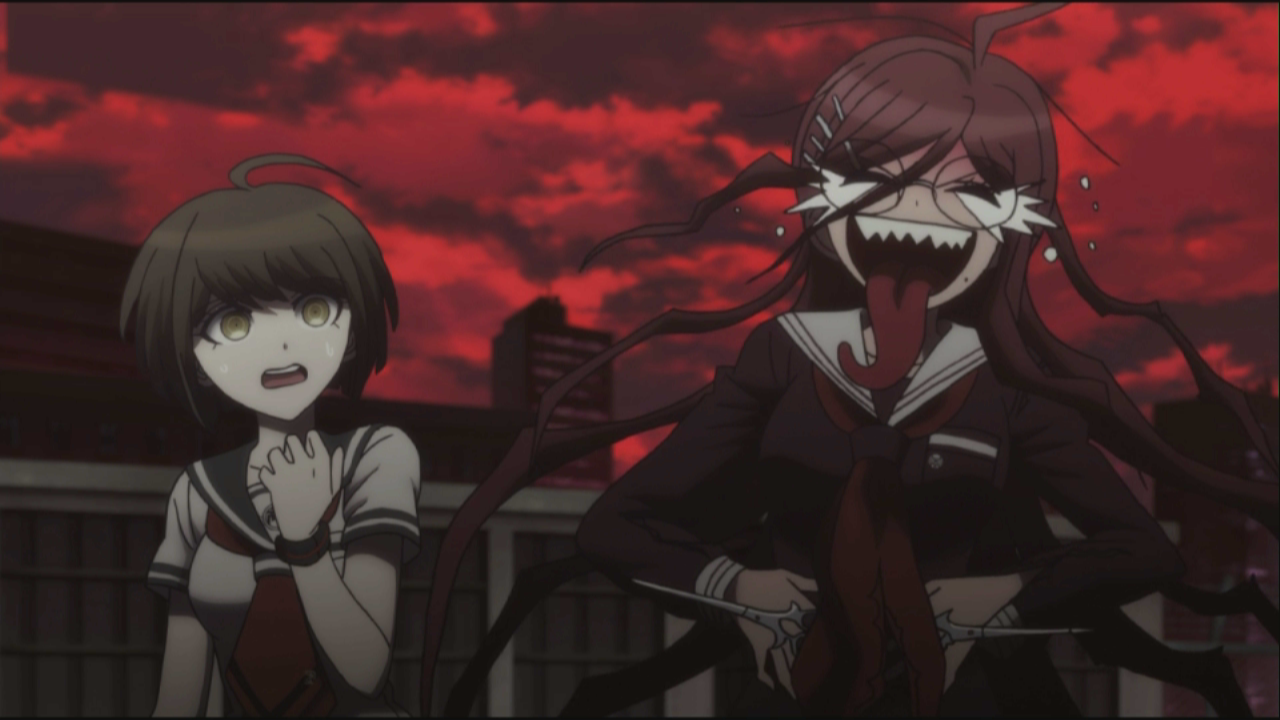 The story of Ultra Despair Girls takes place between the events of Trigger Happy Havoc and Goodbye Despair. Komaru, the sister of series protagonist Makoto Naegi, has spent a year in confinement, unaware of the fact that humanity has suffered the most tragic event in the history of the world during her imprisonment. One day while enjoying her breakfast, her most important meal of the day is interrupted as a Monokuma, one of the series’ iconic, monochromatic bear robots, bursts through the door of her apartment-turned-prison cell and tries to tear her limb from limb. Just before she’s cut to ribbons, Komaru is saved by Future Foundation chairman Byakuya Togami. Before parting ways, Togami gives Komaru a special gun that has the ability to destroy the Monokumas that are menacing the city with pieces of weaponized code.

“…Ultra Despair Girls is pretty much Danganronpa grafted onto the skeleton of The Running Man.”

Shortly thereafter, Komaru encounters the fan-favorite schizophrenic serial killer Toko Fukawa, and the two join forces in an attempt to escape Towa City, which has become a hunting ground for a band of demented elementary school kids hell-bent on murdering every adult in the world to create a parent-free utopia. Basically, Ultra Despair Girls is pretty much Danganronpa grafted onto the skeleton of The Running Man. Except instead of Arnie in a skin-tight, banana yellow leotard, we’re dealing with a lot more fleshy anime fan service. And while I love the Austrian Death Machine as much as the next guy, I think it’s a welcome trade-off.

Oh, and did I already mention the armies of killer robot bears? How about the one with the Jersey accent who sounds an awful lot like Carl from Aqua Teen Hunger Force? 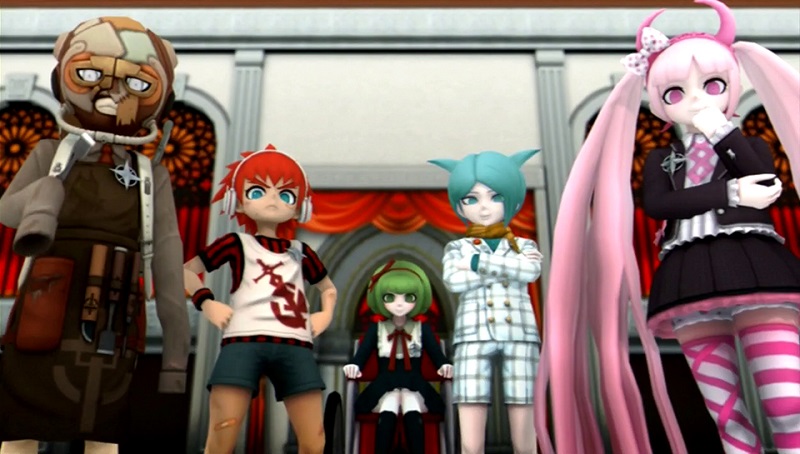 These juvenile delinquents are looking to make Komaru and Toko’s lives hell in Ultra Despair Girls.

As goofy as it can be at times, there’s a really compelling story crammed into the Danganronpa series. That said, I can’t recommend diving into the recently-released Danganronpa Reload 1-2 (read our review here) if you haven’t already before starting Ultra Despair Girls. Because going in with no knowledge of the story’s past events will greatly impact how much you enjoy the game. It’s also worth noting that the story delves into some pretty uncomfortable topics. Fair warning: if you can’t stomach extreme violence, the mention of pedophilia, and other grim subjects, you might want this one out. Spike Chunsoft’s ability to walk the line between lighthearted absurdity and incredibly dark themes is unrivaled. Then again, much like David Lynch’s Twin Peaks, the franchise’s knack for bouncing from quirky to queasy moments is big part of its charm.

“Spike Chunsoft’s ability to walk the line between lighthearted absurdity and incredibly dark themes is unrivaled.”

If you’re still reading this this review then you’re probably thinking to yourself, “Enough about the story, Frank, you rambling alcoholic! Tell us how that shooter portion you mentioned actually ties into Ultra Despair Girls.”

Happy to oblige, dear reader! The shooter mechanics are simple enough on the surface, but open the doors for plenty of fun experimentation. Komaru’s aforementioned hacking gun starts out a veritable pea shooter. However, by acquiring Truth Bullets you can upgrade your gun to perform different functions, which basically turns Komaru into Mega Man in a miniskirt. While your standard bullets are pretty pitiful, a well-placed shot to the glowing red eye can put a Monokuma down for the count. Additionally, shots that follow-up a blast to to the eye do significantly more damage than standard bullets. Considering the fact that ammo is a precious commodity, taking the time to make your bullets count is definitely encouraged.

One thing I really like about the combat is the way Truth Bullets can be used in unconventional ways to tip the odds in your favor. For example, zapping a klaxon-clad Siren Monokuma with the “dance” Truth Bullet will attract other enemies to him. Following this up with a “Move” shot on a nearby electric car can cause it to crash into gaggle of grizzlies, effectively reducing them to tufts of stuffing and scrap metal. Shield-toting bears can be a real menace, too. Thankfully, using the “Knockback” Truth Bullet can blast their shields out of their paws, and even send them flying off of ledges to their demise. 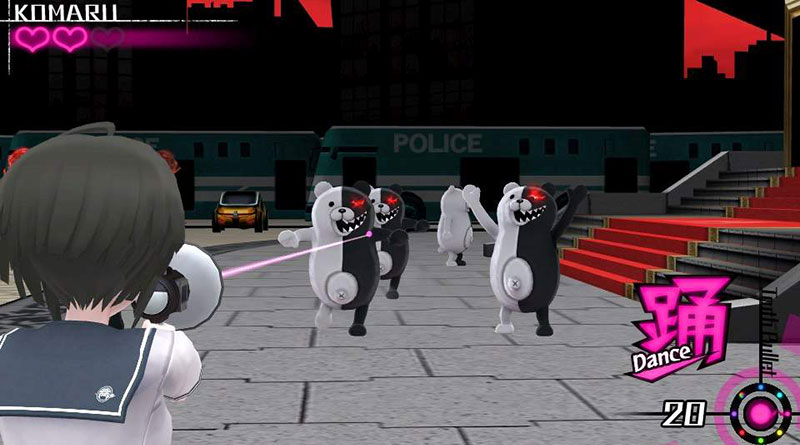 The Dance Truth Bullet is an invaluable tool. After all, it’s much better to have the enemy cut a rug than your throat.

While Komaru is a force to be reckoned with once her hacking gun is upgraded, she’s only one half of Ultra Despair Girls’ dynamic duo. By tapping the triangle button you can switch to Toko—so long as you have batteries to spare—to unleash some real damage on the enemy. Activating her is essentially pressing the win button, as the shear-wielding psychopath is invulnerable and comes equipped with a handful of devastating special attacks that can slaughter entire groups of enemies. Great for crowd control and bringing bosses to their knees, she’s the best tool to use in a pinch or when tasked with rescuing adults when time is of the essence. 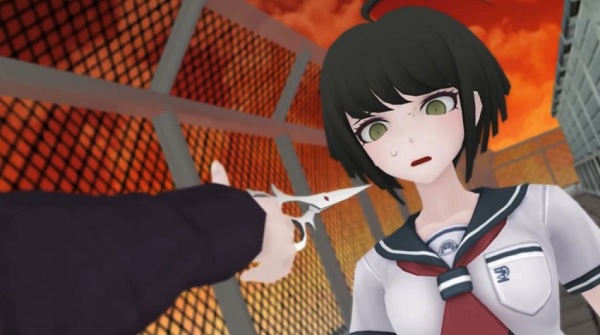 Considering its a port of a PlayStation Vita game, it makes sense that Ultra Despair Girls isn’t the most graphically impressive title on the PS4. Still, it has a distinct visual style that’s hard not to appreciate. Clean lines, vibrant colors, and varied character designs bring Towa City and its captive inhabitants to life. And little aesthetic flourishes, like the series’ signature splashes of neon pink blood and expressive character portraits, make the on-screen action pop. The game also shines when it comes to its character designs, which, to be fair, have always been one of Spike Chunsoft’s strengths when it comes to the series. Last but not least, there’s a ton of animated cutscenes created by the team behind the Danganronpa anime. And just as you’d expect, they look as fantastic as ever.

Of course, making the jump to the PS4 brings a host of other improvements, such as high-resolution textures and character models along with silky smooth 60fps gameplay – even when the gameplay is at its most heated.

Spin-off titles almost always come with the stigma of being inferior to the mainline entries in their respective franchise. That said, it’s understandable if the idea of such a narrative-focused franchise getting the third-person shooter treatment makes you feel a little skeptical. Thankfully, Danganronpa Another Episode: Ultra Despair Girls still manages to keep the spirit of its series intact despite its wildly different mechanics. In the end, the game succeeds in delivering a gripping and often uncomfortable story while providing some fun, arcade-style shooter action to spice things up.

If you’ve already played the game when it released on the Vita, it’s hard to call this spiffed-up console port a must-buy. Apart from the visual bells and whistles, there simply isn’t a whole lot of new stuff going on here. However, if you missed out on the adventure the first time around, Danganronpa Another Episode: Ultra Despair Girls is an excellent addition to the PlayStation 4 library that no fan of the series should be without.

Full disclosure: This review is based on a retail copy of Danganronpa Another Episode: Ultra Despair Girls given to HeyPoorPlayer by the publisher. 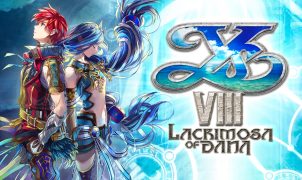