Randall’s opening scenes are reminiscent of the classic Flashback, with a protagonist waking up with no memory of his former life. He’s in a totalitarian world where a mad scientist has caused people to become addicted to augmentation (or something), so must now do his bidding. Also, like Flashback, Randall is a 2D platformer where you explore futuristic cityscapes. This is where the similarities end. It’s become almost cliche in recent years to celebrate games which are “gloriously dumb”, managing to be fun in an over-the-top way. Randall is just ingloriously dumb, being asinine while still managing to be both conservative and derivative.

The first stumbling point for Randall is the tedious combat system. After finishing the cursory tutorial for the dashing mechanic, Randall is thrust into his first combat with a few uniformed goons. Three strikes string together a basic combo. Chain five hits together and you regenerate some health. Dashing through enemies makes you briefly invulnerable to their strikes while building some distance for your next attack. Though more mechanics are introduced throughout Randall, you’ll never need to know anything more than these three very basic facts. Going for crouching strikes or throwing baddies out of position were options, but they were never necessary or even encouraged. By about the hundredth fight I was moving in a state of glazed-over metronomic repititon: “combo, dash, regen, combo, dash, regen”. Whether this repetitious fighting is down to cookie-cutter enemies with no variance in their attack patterns, or just thoughtless game design, will go down in the great list of “questions no-one cares about”. 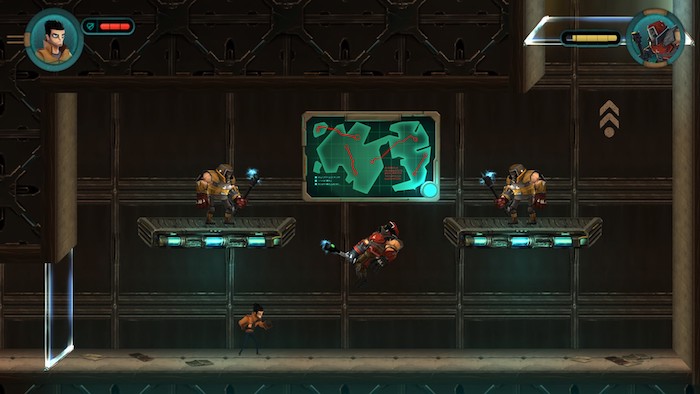 Even the boss battles can’t make the tiresome combat any more interesting. The boss battles have plenty of exploits and bugs. Early on, I faced a hideous, grey-skinned skeletal monstrosity. Purely by accident, I discovered I could actually walk inside him, making my invulnerable to his attacks. The only thing that presented a challenge therafter was the fact he’d sometimes get stuck in the middle of his animations and freeze in mid-air, leaving me unable to predict his attacks. The second part of this boss battle was just dodging some randomly thrown bombs while fighting yet more of the same dudes with body armour and batons (where do they come from, and where do they go after being teleported in to fight Randall for the thousandth time?) Everything about Randall’s design just screams laziness (or at least grunts it with a half-hearted wave of the hand).

The worst part of Randall is its story (or the nonsensical narration that could generously be called one). It’s very quickly clear that the creators of Randall do not speak English fluently, but oddly enough, whoever translated the game for them apparently doesn’t either. Even though narration is relatively light on the ground, virtually every text box manages to have some sort of unintentionally hilarious typo in it (definitely more amusing than Randall’s attempts at wisecracks anyway). Even when you put the poor grammar aside, everything that’s being said is asinine, with swear words sprinkled liberally that seem more an attempt to seem edgy than a way of punctuating a profoundly emotional moment (of which there are none). Randall encounters someone for the first time and then a couple text boxes later shouts “I’m gonna kill you, you piece of shit!” That pretty much says it all, really. 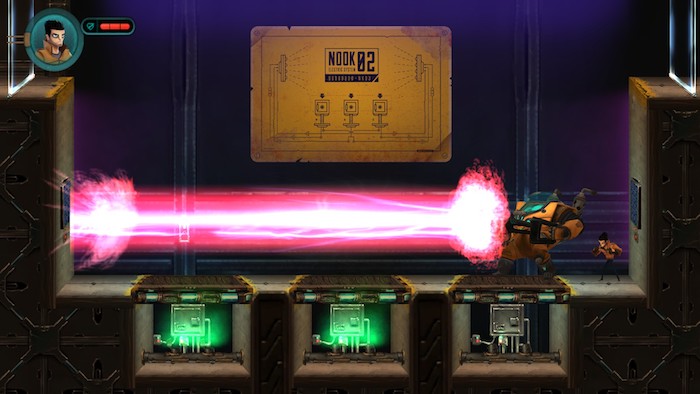 What drags Randall up from being spectacularly bad to just being frustratingly below par is its platforming sections. As well as being able to wall-jump, Randall can also do a type of spinning flip that can launch him forward through narrows gaps between sawblades and flamethrowers. Combining all your parkouring skills together to navigate through each deadly gauntlet of death requires great precision, and is very rewarding when you succeed. Randall would have been a lot better if the loathsome combat was excised entirely and the designers had instead focused their limited resources on the platforming.

If anything though, these more platforming competent sections underline the incoherency of the rest of the game. Why is an abandoned towerblock filled with flamethrowers that gout fire at exact intervals? Why is there a 30 foot long sawblade in the entrance to a prison? There’s no thought put into the world of Randall; how it works, how it all hangs together. This lack of thought is probably why the scenery is so drab and boring to look at. Not every game has to have some brilliantly unique aesthetic, but it’s a bit weak to create a setting out of a mindless collage of platforming tropes. 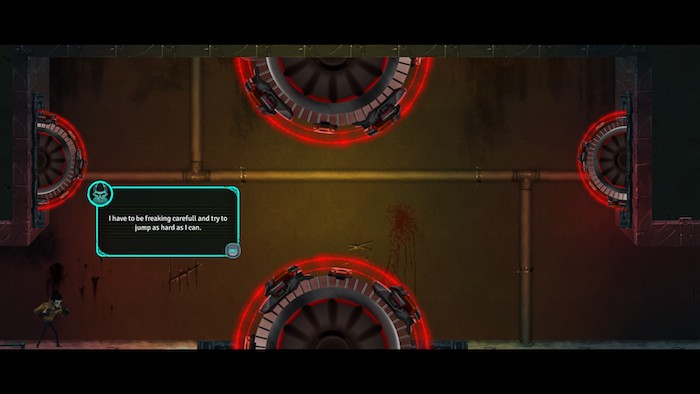 Whenever I started to squeeze some semblance of fun out of the platforming sections, Randall’s technical issues were quick to give me a bracing, open-handed slap in the face. One area required me to stun a floating head so I could jump on top of it and ride it to the next area. However, it repeatedly failed to spawn in the right area, leaving me confused as to what I should actually be doing. Another time I moved to the next screen only for it to turn black and leave me stranded in nothingness. Because of the way Randall’s save system works, where restarting will drop you back to the last save station, this lost me a good 10-20 minutes of progress.

To summarize this review in alliterative terms: Randall is redundant. 2D platformers have been undergoing a renaissance for some time now. With brilliantly inventive titles such as Headlander so recent in our memories, it’s a mystery why anyone would plump for a title that seems almost stubbornly derivative and generic. With disappointingly repetitive combat, a bland setting and an asanine, typo-ridden attempt at a story, there’s very little to distinguish Randall. It’s apt that Randall has an amnesiac protagonist, because it’s so instantly forgettable.

Full Disclosure: This review was based on a review copy provided to Hey Poor Player by the publisher