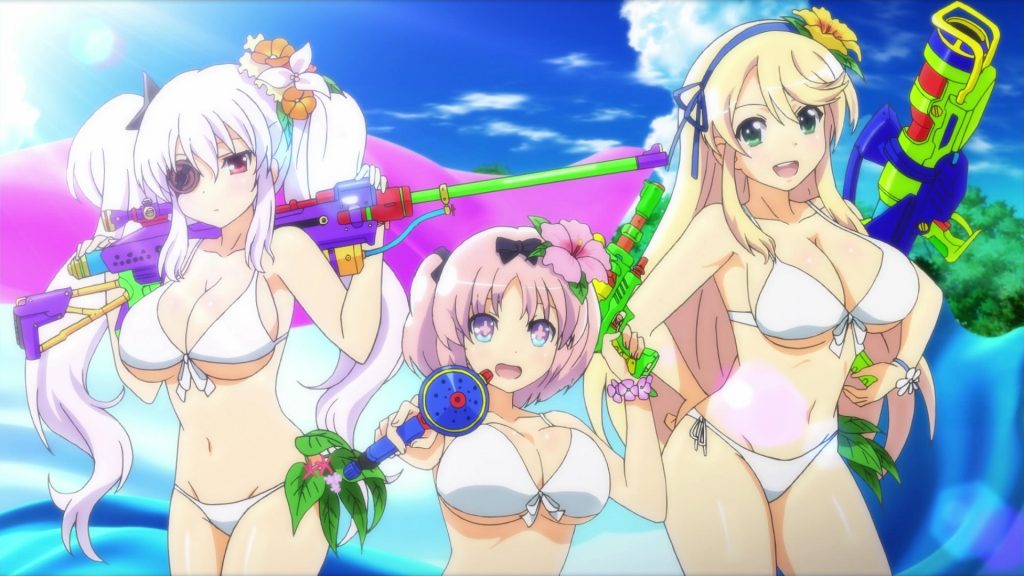 Ah, Senran Kagura, where were you during my teenage adolescent years? You could have helped me through some of my most difficult and confusing times. Times I’d rather not think about now that I’m a somewhat respectable middle-aged man with a wife and child. Times when my middle school math teacher (hello, Mrs. Hayes!) would call upon me to complete a math problem on the chalkboard, but I would refuse to do so due to the tent I was pitching underneath my desk. Oh, am I getting too personal? Sorry about that.

In this new addition to the Senran Kagura Series, titled Senran Kagura: Peach Beach Splash, players will be whisked away to Peach Beach’s sacred water gun tournament, which has been held by ninjas since ancient times. Yep, you read that right. Busty female ninjas have been holding water gun tournaments on a secret island for thousands of years. And after all this time I’ve been vacationing in Florida. If I’ve only known. 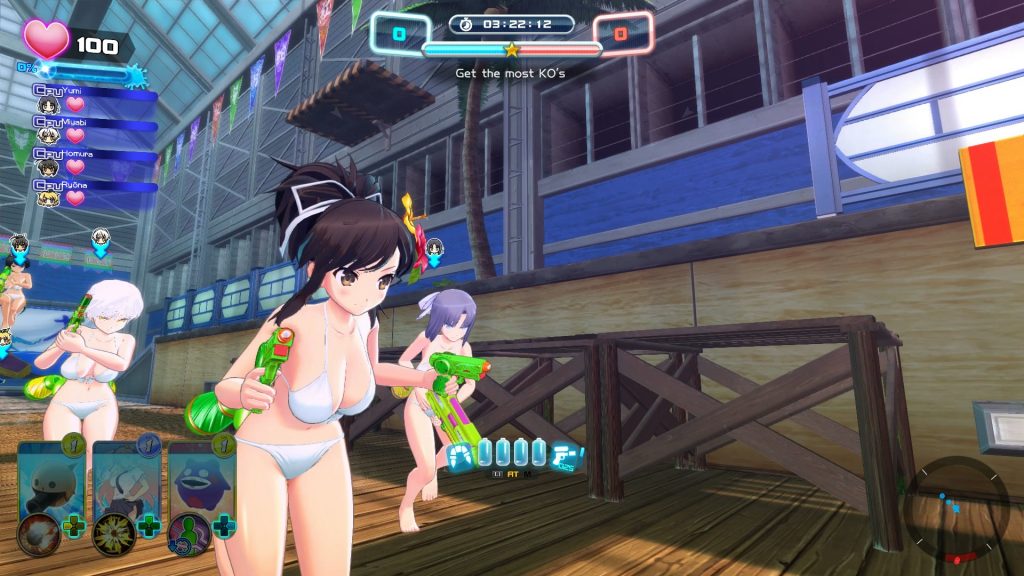 Look at those bazookas!

When I first laid eyes on Peach Beach Splash I immediately thought that XSEED Games and developer Tamsoft were putting my favorite Senran Kagura girls in a Splatoon-inspired concept, but after getting my hands on the final game, I can say that this strays far, far away from the Nintendo series. Peach Beach Splash is a third-person shooter where players take control of female ninjas armed with all sorts of different types of water guns. Instead of taking over areas of the map with different color water/paint, the goal here is to blast away other female ninjas. But unlike other shooters that require you to murder virtual people with bullets, the objective here is to soak the girls in copious amounts of water until their bathing suits fall off.  Love over violence is what I always say!

The final product will feature several different modes. Single Player Splash mode will task you with battling a number of interesting boss characters, Paradise Episodes includes individual character stories, Multi Splash contains several online ranked and unranked multiplayer modes, and the mode I was able to demo, V-Road challenge mode, which lets the player construct a team of beautiful bouncy ninja warriors to take on numerous waves of enemies. After getting a quick introduction from the XSEED representative during our booth tour at E3 last week, I anxiously jumped in and searched out my favorite girls to add to my team of buxom beauties. 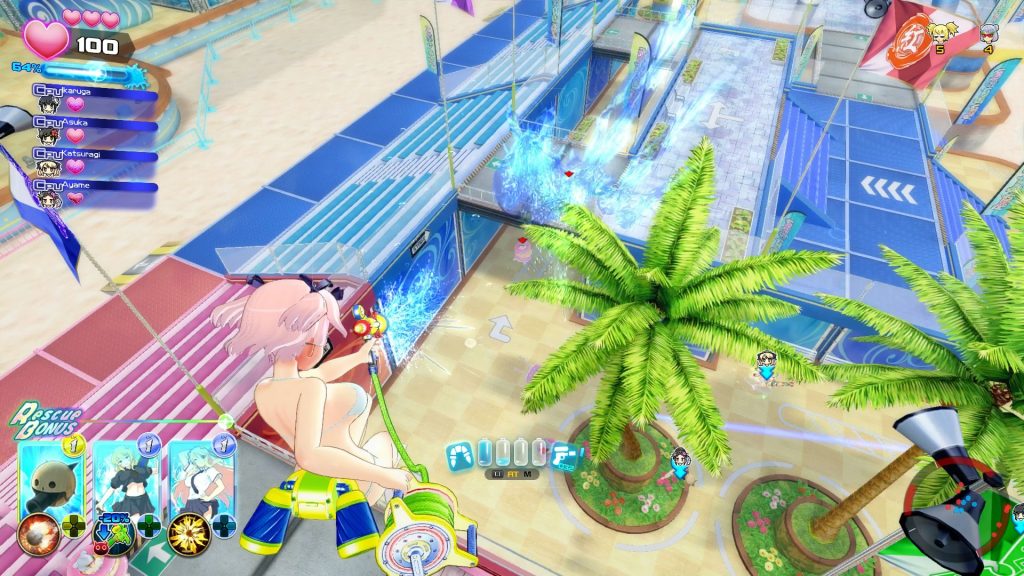 The view is great from up here!

While deciding on which pair of breasts I wanted to see get soaked, I was greeted with several customizable weapon and skill options. Unlockable cards can be equipped to add various effects to the girls, such as health regeneration, stronger attack power, lowering opponents attack power, and a plethora of other enhancements. I was able to choose 6 cards (that I quickly decided on without any type of strategy) before finally setting foot on Peach Beach.

If you’ve played Senran Kagura: Estival Versus on the PS4 then you’ll know exactly what to expect when it comes to Peach Beach’s visuals. The world is extremely vibrant and the girls look like they were ripped right out of an anime, giving the whole experience a warm, welcoming feel. I rushed right into battle shooting my Gatling water gun at hundreds of bathing suit clad ninjas who were wearing pink inner-tubes as armor and sporting large pool noodles as melee weapons. Pressing the jump button twice would send me far above the squad of enemies, but also emptied my water meter, causing me to desperately search out a pool of water to reload. Similar to Estival Versus, hundreds and hundreds of enemies were rushing toward me at once, and the PS4 was able to handle all the action without a hitch. My session ended quickly as I dispatched all the girls on the map with extreme prejudice, but as I was asking the XSEED representative some questions about the game I couldn’t help but notice another demo unit had a multiplayer match taking place. This is where Peach Beach Splash will shine!

During the Multi Splash’s Team Battle Mode, the crazy antics of the Senran Kagura series are in full effect. I watched a girl break out an assist card summoning a rubber ducky that could blast an impressive amount of water from its beak. The player used the duck’s water blast stream to force a girl’s legs wide open, causing her to fall flat on the ground as she tried valiantly to hold her bikini bottom on. As expected, the pressure was too overwhelming and the female ninja’s bikini bottom was whisked away with the steady jet of water. The XSEED rep looked at me, and I at him. We both gave a chuckle and went back to talking as if nothing happened. Yes, this is Senran Kagura! This is Peach Beach Splash! Look for me online when it launches on PlayStation 4 later this summer.