Call to Arms, Return to Form 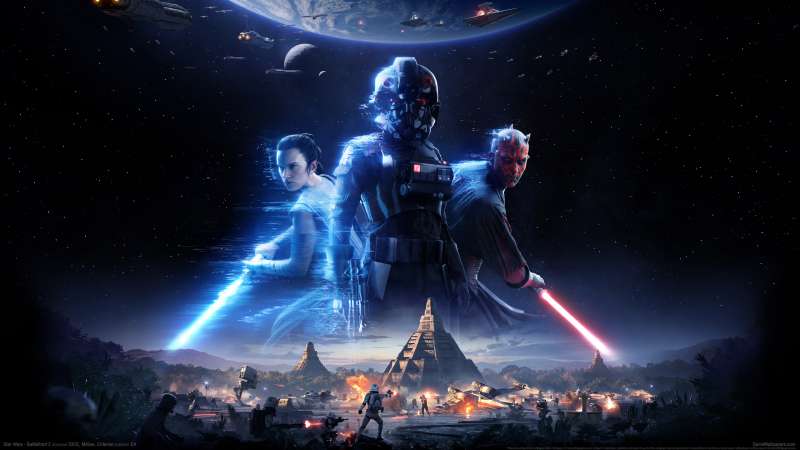 When EA’s Star Wars Battlefront released in 2015, I had a similar reaction to most people: disappointment. Disappointment that the game was so light on modes and content at launch. Confused by the utter lack of different soldier types, or anything to distinguish one battle from the next. Baffled by how few maps there were. It seems pretty well-agreed across gaming consciousness that Battlefront 2015 was a huge misstep, largely theorized to have been rushed in order to sync up with the release of Star Wars: The Force Awakens. Two years later, Star Wars Battlefront II has imperially marched in. It’s skirmish time. And after coming in from the rubble-filled streets of Naboo, I’m delighted to report that Battlefront is cool again.

I Never Cared So Much About Naboo, of All Places

I was part of one of several groups of 32 to line the sides of Sony’s Star Wars Battlefront II microstadium. It was arranged so that one circle of players sat in beanbags, with another group standing behind them watching TVs above the lower group. The setup was neat, and allowed us to talk hear and there as we played. Everyone on the same side was on the same team; I was part of the Clone Trooper army, defending Naboo’s Theed Palace from an oncoming ATT carrier and accompanying assault force of Battle Droid forces.

A brief video explained the scenario before we began. Our defense efforts would work in three phases. First, we had to to attempt to take the ATT down in its approach down a central street in Naboo. Failing that, the second phase would require us to hold the line at the entryway of Theed Palace. Should that line break, the third phase was a last stand in the palace’s throne room.

The first phase required us to take down the ATT using missiles that would drop periodically around the map. We messed it up more royally than the royal palace itself. Most of our squad focused on trying to take enemies out than get the weapon drops. We also failed to hold the line at the entry, no matter how hard we tried to out-strategize. We finally managed to turn things around right in the throne room, though. This was where Star Wars Battlefront II really started to impress me. Battlefront II’s class variety and mission structure came together to push us forward.

Each Clone, All His Own

Classes are back. They’re back! Rejoice! Go tell it on the mountain! Yes, despite the mistakes made two years past, we’re back to playing a Battlefront game that feels like a full online multiplayer experience. Assault and Heavy soldiers, Officers, and Specialists are the four mains, with some others purchasable like Hero characters. I stuck mostly to the Officer class. Providing shields and setting up turrets are right along the lines of what I typically do best. I was able to change a couple of my character’s abilities around, thanks to the return of Battlefront 2015’s card system. Some of the predetermined cards availible to me let me swap out variant abilities. In my case, this meant getting a grenade launcher, useful in a pinch if playing straight support doesn’t get me far enough. 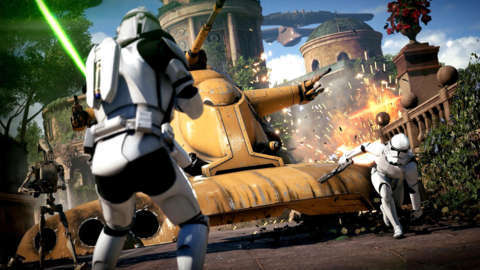 The first phase of the fight was a bit of a mess on our end. The grand main street and its network of side-alleys were peppered with rocket launchers that spawned intermittently. Our job was to run for them, grab them, and shoot them at the big brown droid carrier on its way. The enemy was tasked with stopping us, and the gunplay that followed was right there with the best of them.

In the second and third phases, our role was more directly defensive. It was here that my capabilities worked best, because there’s nothing better than a well-stashed turret to help take out the invading force. I also liked that I could create a radius around me that shielded my allies, like Lucio’s healing field in Overwatch. I could even spend points on vehicles. I romped around in a scout walker, until I got easily shot to smoldering ribbons. The Naboo Starfighter was a lot of fun to fly, but this particular stage didn’t seem to be designed with air vehicles in mind. But hey, crashing the thing into the ATT as it approached was quite cathartic. I got to play as Rey a couple times, and loved her mind control and enemy location force abilities. Darth Maul was the hero of show, though.

I’m worried I’m underselling the damn thing. Star Wars Battlefront II truly impressed me, but this is just a preview based on one match, not a whole week with the game. That said, it’s my game of show for E3 2017. The controls and visuals are tighter than ever, and what needed to come back has not only come back; it seems to have improved, as well. If EA can keep this up in the full game, Star Wars Battlefront II has the potential to stand up there with the PS2-era originals. May the force be with you.

Spellspire is Uninspired and Mired in Design Misfires     Spellspire is the latest console release from eclectic indie developer 10tons, and, for better or worse, it doesn’t stray…