“You Are Stronger Than You Believe.” 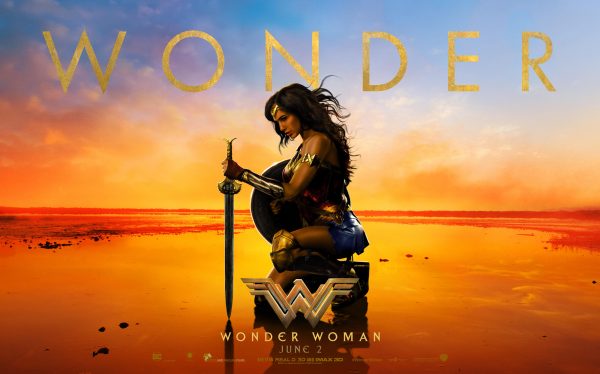 This review is a week late in the making. But to be fair, Wonder Woman is years late to the silver screen. Therefore I don’t feel bad saying in terms of both the movie, and the Hey Poor Player review section, that it’s finally here.

I, personally, have been holding my breath until this moment, hoping beyond hope that DC and Zack Snyder didn’t do to Wonder Woman what they did to Batman and Superman. A lot hinged on this movie for a lot of fans, especially a lot of female fans of comics. It’s not often we get the representation we want in media, and less so the representation we deserve. Strong characters can be crippled instantly when that strength is undermined by what the creative force at large feels defines a female character. It can be something as commonplace as skimpy armor and outfits, right down to Black Widow feeling her femininity was defined by her ability to bear children.

No, Joss Whedon, we haven’t forgotten about that.

But nevertheless, I think fans everywhere can say that a lot of hope hinged on the release of Wonder Woman. I also think, after finally seeing it myself, that I can confidently write that we as a collective are pleased.

For those who haven’t seen the movie yet, just be forewarned that there are a few spoilers ahead.

“You Have Greater Powers Than You Know.” 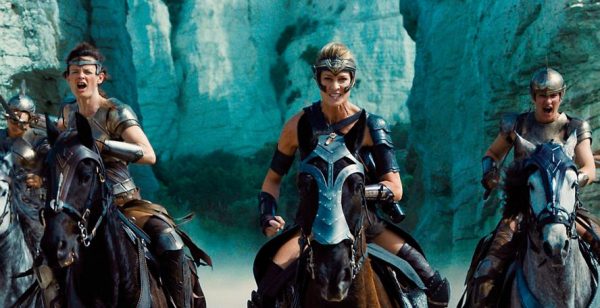 All in all, when I think back on it, Wonder Woman is a typical origins story. It’s just that the terms are different. Most origin stories show the conflict within a hero to step up to do the right thing. We don’t get that in Wonder Woman. Diana is self sure and resilient. She has no self doubt. Her real obstacle is the people around her.

We open with a young girl, the only child on the island of Themyscira in fact, running off to watch warriors training for battle. It’s all young Diana wants to do as well. Yet her mother won’t allow it. In fact, this habit to deny Diana her desires is a long standing theme throughout the film. It starts with her mother, then with Steve, and then with just about every person she meets from that point on, as stated above.

Now, for those that don’t know,  the Amazons live on an island that is inhabited by only – you guessed it – women. And Diana’s mother is their queen. Her aunt Antiope (played by Robin Wright) is the general of Themyscira and encourages Diana’s desire to learn how to fight. Antiope knows that it’s necessary for her, and all of the Amazons, to survive. Yet, like any loving parent, Diana’s mother Hippolyta forbids it for fear of her getting hurt. It also serves to placate her denial of what is to come. Nevertheless, the willful Diana is trained by her aunt in secret until Hippolyta finds out. Upon realizing that her efforts to keep her daughter safe are fruitless, she now demands that Diana is to be trained harder than any Amazon before her.

But this is for a very good reason. More on this later.

Obviously, once Steve Trevor shows up – breaking through the (questionably constructed – I mean come on they just phased through it!) portal around the island – the gig is up and Diana and the Amazons must fight off a small scale German invasion that was on Steve’s tail. This skirmish results in a handful of dead Amazons, the least of which not being Antiope herself. With her final words, Antiope speaks of the “Godkiller”: a weapon given to the Amazons to stop Ares in his quest to destroy mankind.

“I Already Tried Nothing.” 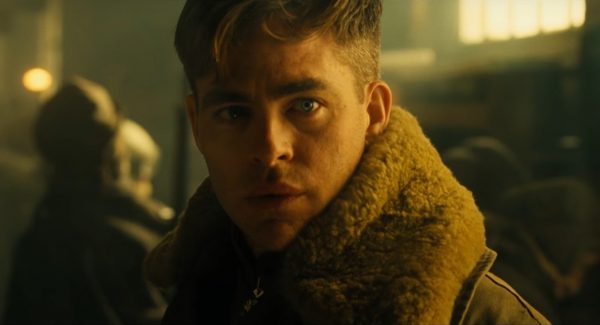 While the main goal of the movie, as with all superhero movies, is to stop the bad guys and save the day, it sometimes felt that Ares was the back burner issue throughout a lot of Wonder Woman. Diana’s greatest challenge more often than not was trying to make herself heard in a society that is built upon the uplifting of male voices and the silencing of women. These are concepts that should have been completely unfathomable to her, and at times I felt myself wincing at the awkwardness of the situations as she allowed herself to be ushered out of rooms by Steve Trevor, all the while shouting about the “injustices” around her. These injustices, however, weren’t about her not being allowed to speak.

In fact, that Diana wasn’t really allowed a voice in this new society never seemed to occur to her despite the fact that it happened so freaking often. This was something that surprised me, given how important she knew her role was in this war. Yet she could always be talked down from her vociferous frustration. Being told “no” countless times about her concerns, which always revolved around the inaction of the people around her. It was never about the treatment of women.

It’s not that the movie should have oozed girl power in this regard, but I would have felt that given how unfamiliar and appalling she found Etta Candy’s occupation to be, it seemed nonsensical that Diana wouldn’t have kicked back at her own treatment from time to time.

“Something No Hero Can Ever Defeat.”

On a quick side note: another issue I had with this movie was that, once again in a movie with a female lead, we have devolved to having a godforsaken fashion show. Just once, can we please skip this? I get that it’s comical. Diana, not understanding our customs and dress, criticizing how impractical our clothing was. Few things emphasize impractical fashion better than turn of the century England. Or…most of European history, if we’re going to be honest. Yet it seems that women and fashion can never not go hand in hand. Please. Stop doing this Hollywood. You did it with Super Girl and it wasn’t cool then. It’s not now. 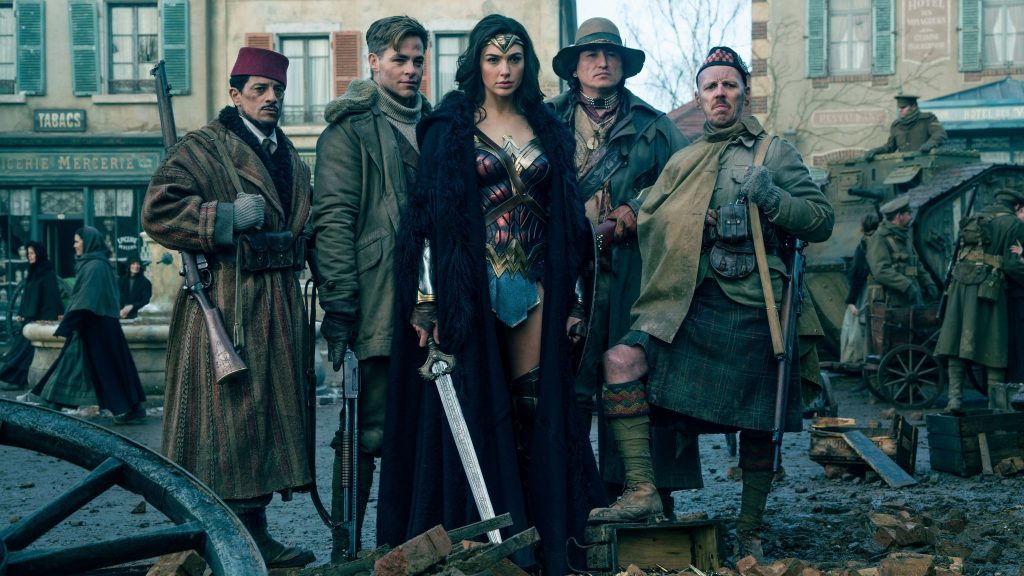 With all that being said though, Wonder Woman was a great film. It’s a perfect summer blockbuster that doesn’t try to be anything other than what it is: an origin story through and through. And one that features amazing characters.

It goes without say that Gal Gadot shines as Diana, but she wasn’t the best thing on screen all of the time.  Steve Trevor’s band of misfit warriors stole the limelight on occasion, and it was neither unwanted or offensive.

Whether it was the broken Scottish soldier Charlie (Ewen Bremner), or the charismatic Sameer (Said Taghmaoui), or the wonderfully not stereotyped Chief (Eugene Brave Rock), this trio created a band that a super woman could work with and not have to worry about anyone holding her back.

And it worked. I cared as much about these three as I did about Diana (and honestly a lot more than I cared about Steve). I wanted them to live to see the end of this thing. They were characters that all held deep sadness and disappointment because of their positions in life. They were also marks of the worst that humanity can do to one another. Sameer had dreams of being an actor, but because of his skin color, he couldn’t find work. Charlie is a soldier who can’t contend with the stress of battle anymore because he’s so haunted by the faces of the people he’s killed. And Chief? He’s a man with nothing left. His people have suffered and had all that they owned taken away from them, yet he tells Diana in a fireside conversation that “at least here, I am free.”

These people didn’t share much screen time with Gadot, but when they did, they were as amazing as Wonder Woman herself. It made me happy to see, and I hope we can expect more of that in future films.

“Only Love Can Truly Save The World.”

The most surprising performance came from the twist of David Thewlis’ character in the final throws of the movie. Thewlis, who will always have a special place in my heart for being Remus Lupin, is such a soft spoken man that it’s hard to hate him even when he’s evil. The reveal of him as Ares really threw me for a loop (no that’s not a bad attempt at a pun) yet at the same time I felt as though he were more of an empathetic anti-hero than an actual villain. Technically speaking, nothing Ares ever says about humanity is wrong. As he attempts to coax Diana into joining him in destroying the most evil of Zeus’ creations, part of me actually wanted Diana to join him and rid the world of us because frankly… he’s right. We are evil, and dark, and we have done so much damage to the world and each other. The three characters I mentioned above proves that in the film more than anything else.

Yet Diana, and the audience, know that despite all of our bad, we are also capable of great and wonderful things. We are worthy of a chance to live, and she will fight for that. She will fight for everyone. And with her newfound knowledge that she is in fact the Godkiller that Antiope spoke of, Diana knows just what to do.

If you can’t make them join you, guess you have to beat them.

“I Can Save Today. You Can Save the DC Entertainment Universe.” 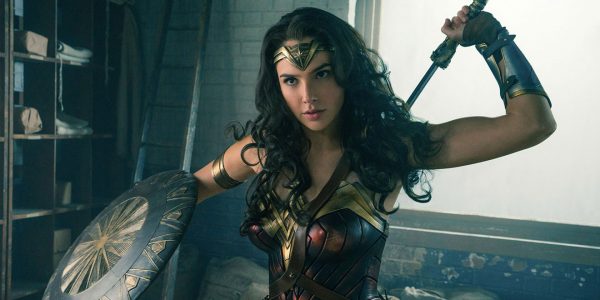 The final battle really screams Zack Snyder’s influence, but not to the point where you’re almost bored with how outlandish things get. Whatever leash they put on Snyder for the fight sequences in Wonder Woman ought to be attached to him for the rest of his career. Wonder Woman balanced the action and intermittent down time better than anything the DCEU has given us to date, and we can only hope that this tempered approach from here on out only strengthens future installments.

This film showed us that DC isn’t dead yet, at least in terms of the silver screen. We can hope for more, and eventually, no matter how long that wait, we’ll get something that was definitely worth it. 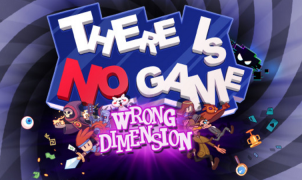