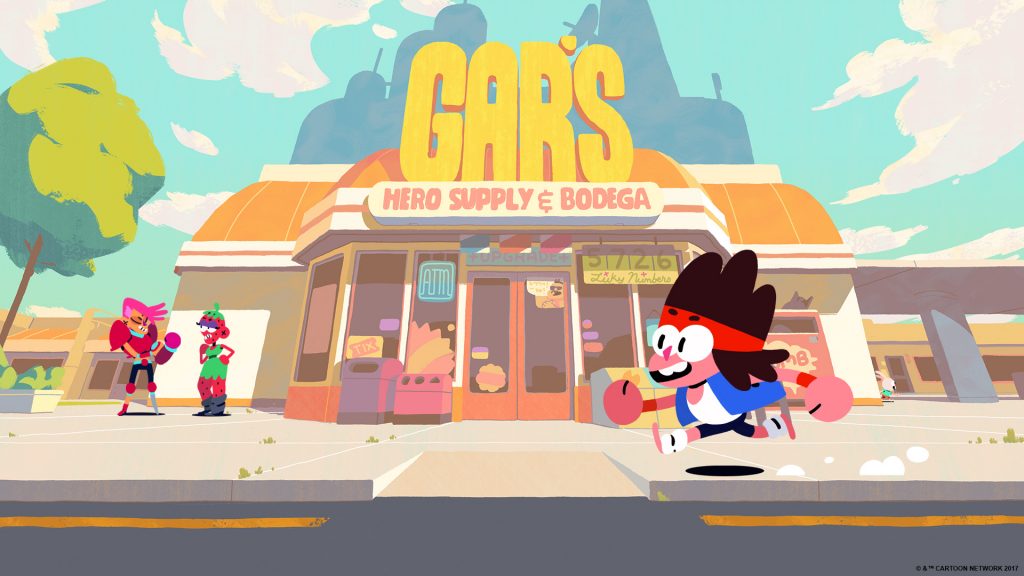 OK K.O.! is the perfect amalgamation of innocent childhood adolescence and comic book heroics. It is a fun piece of media that revels in being fun and charming, and the video game based on it is shaping to be all of that. OK K.O.! Let’s Play Heroes is an action brawler game with RPG elements that is as gorgeous as it is fun to play. Cartoon Network gave some colleagues and I the chance to see and play the game in action – and boy, did it not disappoint. 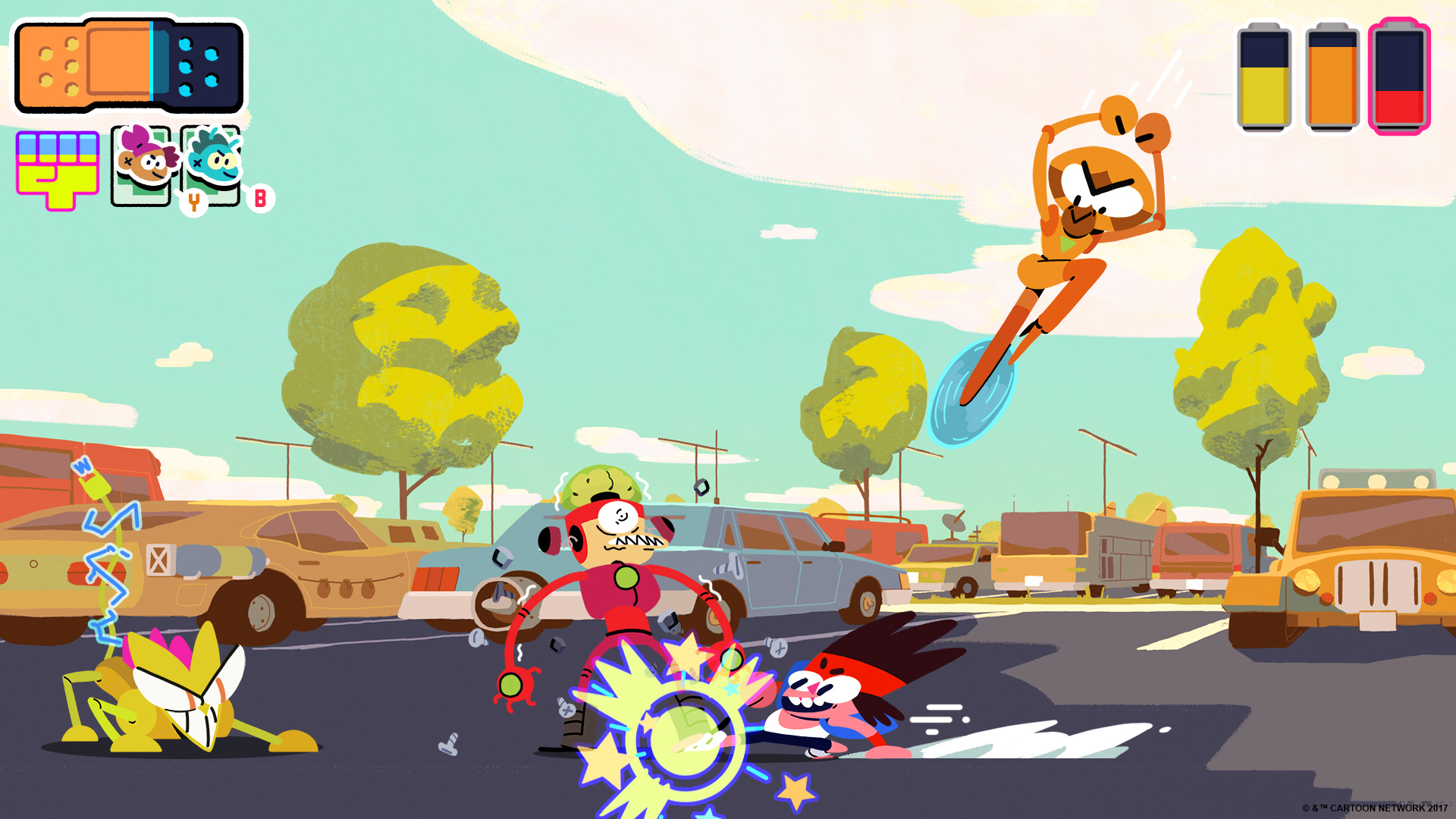 The game centers around the titular character K.O., a quirky, hyper, energetic hero in training. As K.O., you venture throughout the Lakewood Plaza strip mall, doing several odd jobs for your other heroes in training and heroes. The game world is that of the show it is based on, and it looks fantastic. The expressive characters and slick animations make this feel like a living breathing cartoon world, more so than many games based on animated shows. The game’s progression is tied to the several quests that you receive from the colorful cast of characters. The characters that are present change with each day of the week, allowing you to drop or continue quests depending on who’s available to you at the time. The motivation for doing these odd jobs (other than KO just being the sweetest child) is how strong your relationships with each character affect the level of the hero cards.

Just like me when I was a child, K.O. collects trading cards, and these cards impact gameplay in several ways. You receive cards through a vending machine that gives you card packs, containing a random assortment of different cards based on characters in game. These cards can be used to summon different characters in a sort of Marvel Vs Capcom assist system during combat. You have access to two character cards that you slot into K.O. in the overworld before any combat encounters start. Summoning the characters is easy enough, each being tied to a different button on the controller. The developer guiding me through my playthrough said that the combinations of character cards you can equip to K.O. can change how combat is executed, because each card has a different effect. These cards are cool, and depending when you use them they can really put the fight in your favor – that is, if you unlock them. Character cards can only be used when the card reaches a certain level. To gain experience for a card, you must do quests for the specific character tied to that card. For example, to increase the level for a Radicles trading card, you must do quests for the character Radicles. This is a very cool way to tie the narrative with an important combat element in a way that feels organic, and the game has a lot of design decisions help it form a cohesive game. 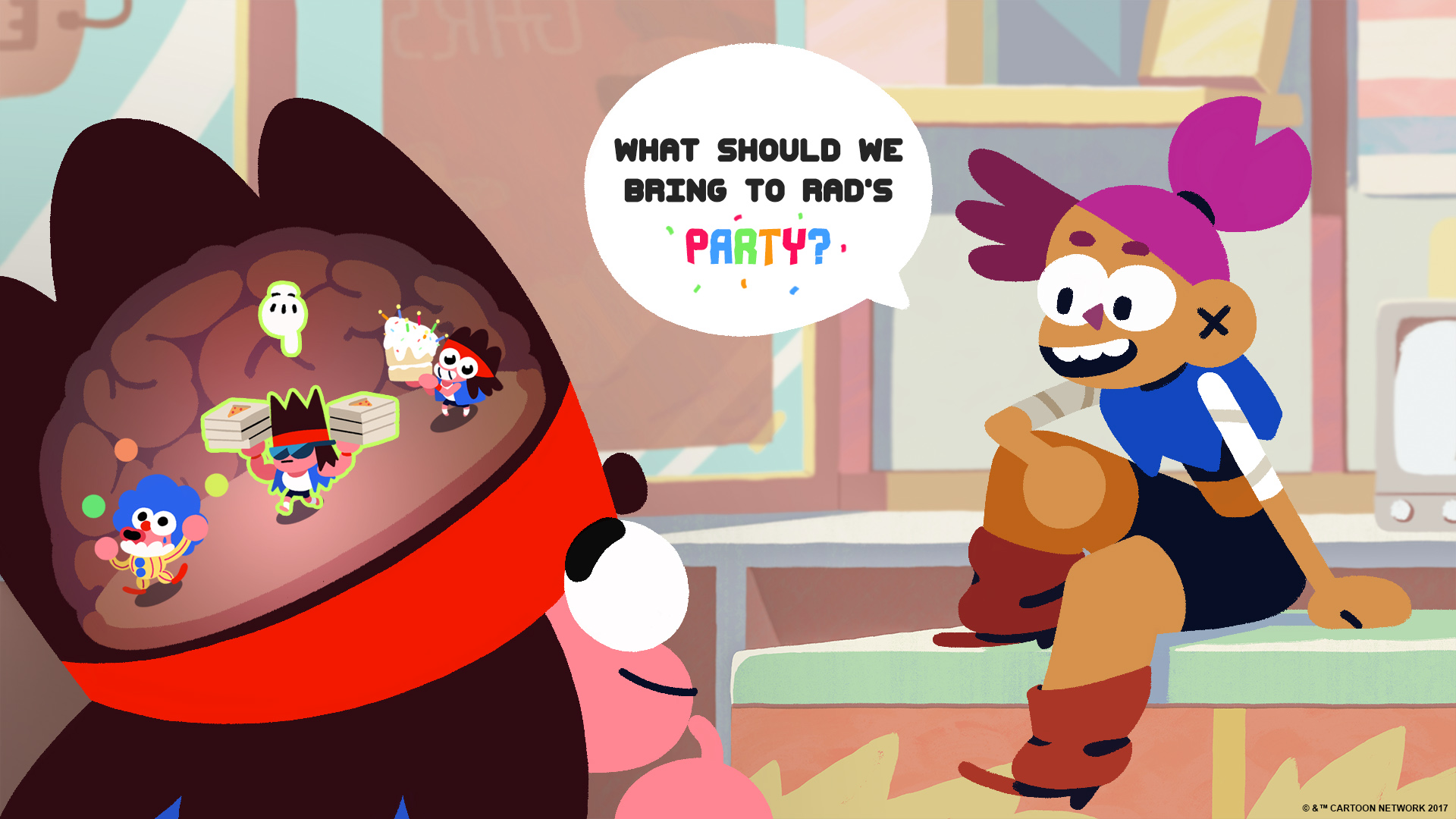 From what I’ve played and what the developer has told me, I’ve inferred that the game was designed to to have depth but still be very accessible to players of varying level of skills. The combat is very responsive, and K.O. is capable of pulling some sick combos if a player knows what they are doing. There are aerial combos, tilts, and rolling, just to name a couple of K.O.’s moves. However, all of K.O.’s moves only use one button, so a player can just button mash and be perfectly fine. There are dialogue choices during quests that can affect how conversations go, but the way these choices are presented involve three very simple, adorable icons. Even the main UI where you can swap cards and look at quests is a simple trapper keeper – complete with card sleeves for all those precious holographic lovelies. All of that complimented by an exploitable cartoon world, with beautiful shifting camera angles and charming animations.

OK K.O.! Let’s Play Heroes is a game I would have been hyped for as a child. It’s a about a boy who wants to be superhero – please everyone – and plays with trading cards. It’s literally 8 year old Nathan. And though it is a game that hits all the sweet spots for me in terms of art and humor, what really astounded me was how well thought out it was in terms of mechanics. The game has a lot of depth, but it doesn’t feel inaccessible. It’s the right amount of challenging for both the children and hipster adults who watch it. This is a game that I could play with my nephews and nieces, and we would all have a great time. OK K.O.! Let’s Play Heroes was such a treat to play, and I cannot wait for more information as it comes out.