Virology will dose your cyberpunk with hallucinogens. 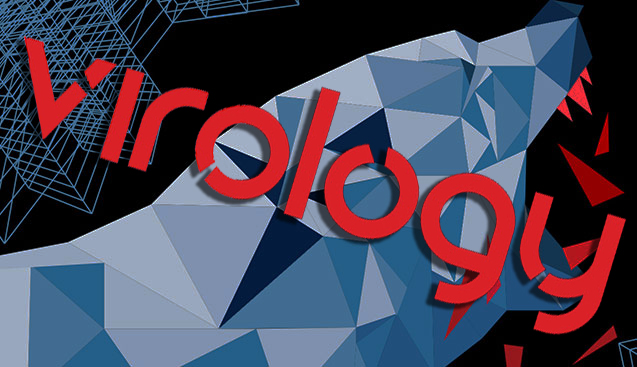 So, before I say what I’m about to say, understand I mean this in a good way.

What the hell did I just read?

William Gibson is probably my favorite author. My standards are pretty high for cyberpunk books. So, when Frank put a copy of Virology (written by Ren Warom) in my hands and asked me for a review, I jumped. Despite not having read Virology’s predecessor, Escapeology, I gave this high-tech novel a go and… here’s what you’ll find:

Formerly earthbound cities, ripped from the ground and placed in orbit by powerful corporate entities. A new kind of internet with sentient, Avatar familiars (Avis for short). Computer viruses (called virads) that will hijack the human body until all it can do is spread advertising jingles through voice and skin. Gangs of mercenaries comprised of children who failed out of corporate society. Salarymen. Guns. Corporate soldiers. Knives. Blood everywhere. Blunt objects. Trauma. Polar Bears. Pain. Cats with tentacles. Crime. A kneecap missing an owner. Revenge.

… and it all fits in about four-hundred pages.

So… what’s the plot?

The story picks up from Escapology with two criminals and their gang escaping from corporate forces after they metaphorically eviscerated an entire corporation. One is Shock Pao – a stealth hacker who is on the run after his last escapade destroyed the Fulcrum corporation. This resulted in him merging with a sentient bioware enhancement called Emblem, making him a kind of pseudo-god in the Slip (the settings evolution of our internet). The other is Amiga – a ruthless assassin who knows all of the right buttons to push to get violent quickly. She got involved in Shock’s life just before Emblem started to entwine with Shock. Then there’s the Hornets, a kind of mercenary youth gang composed of their corporate society’s ‘fails.’ They’re the only family either Amiga or Shock has every really known.

Which is unfortunate, because the Hornets are starting to run out of places to hide, with options narrowing as their foes move in. Their enemies? Lucien du Pont and his ultraviolent inner circle of murder-artists have engaged a hostile takeover of what remains of Fulcrum to retrieve Emblem. There’s Auntie Dong who has a taste for sadism and carnivorous plants. She just wants Shock dead out of spite after his last job took out her people. Then there’s Evelyn Tsai, the rags to riches corporate wunderkind who has profited from the kidnapping of every Avatar in the absence of their creator corp, Fulcrum. Oh, and Zenata? The big bad from the last book? Oh, she ain’t done with Shock and Amiga yet. Not by a long shot. She’s releasing her virads  into the Hornet’s closest allies and making new Zero cyberzombie slaves to rip Emblem out of Shock.

With so many powerful enemies, running isn’t working out any longer. So, Shock, Amiga, and the Hornets do what they do best.

They turn the tables and fight back.

Is any of this making sense? I’m not sure Virology is supposed to – but it’s fun as hell. It struck me about a third of the way into the book that I was essentially reading an imageless manga. The whole thing is written in such a manner as to conjure up Japanese illustrated work. You can see the speed lines with each savage sword swing, feel the pain of the most intimate brain hacks with bold-lined katakana word effects. Virology is a fun trip down cyberpunk lane, complete with corporate abuses, rebellious youth, and rage against a system that is stacked against the protagonists.

Virology gets a little ludicrous sometimes, but… read your cyberpunk. Kadrey’s Metrophage, Effinger’s When Gravity Fails, and William’s Hardwired were pretty out there too. And insanely enjoyable. If those three titles up there turn your crank, then you’ll probably get a kick out of Virology. Just don’t expect a glossary of terms to explain any of it – when it comes to slang, you’ll be figuring it out for a while.