“The Gang Goes to Great Lengths to Read a Cup.” 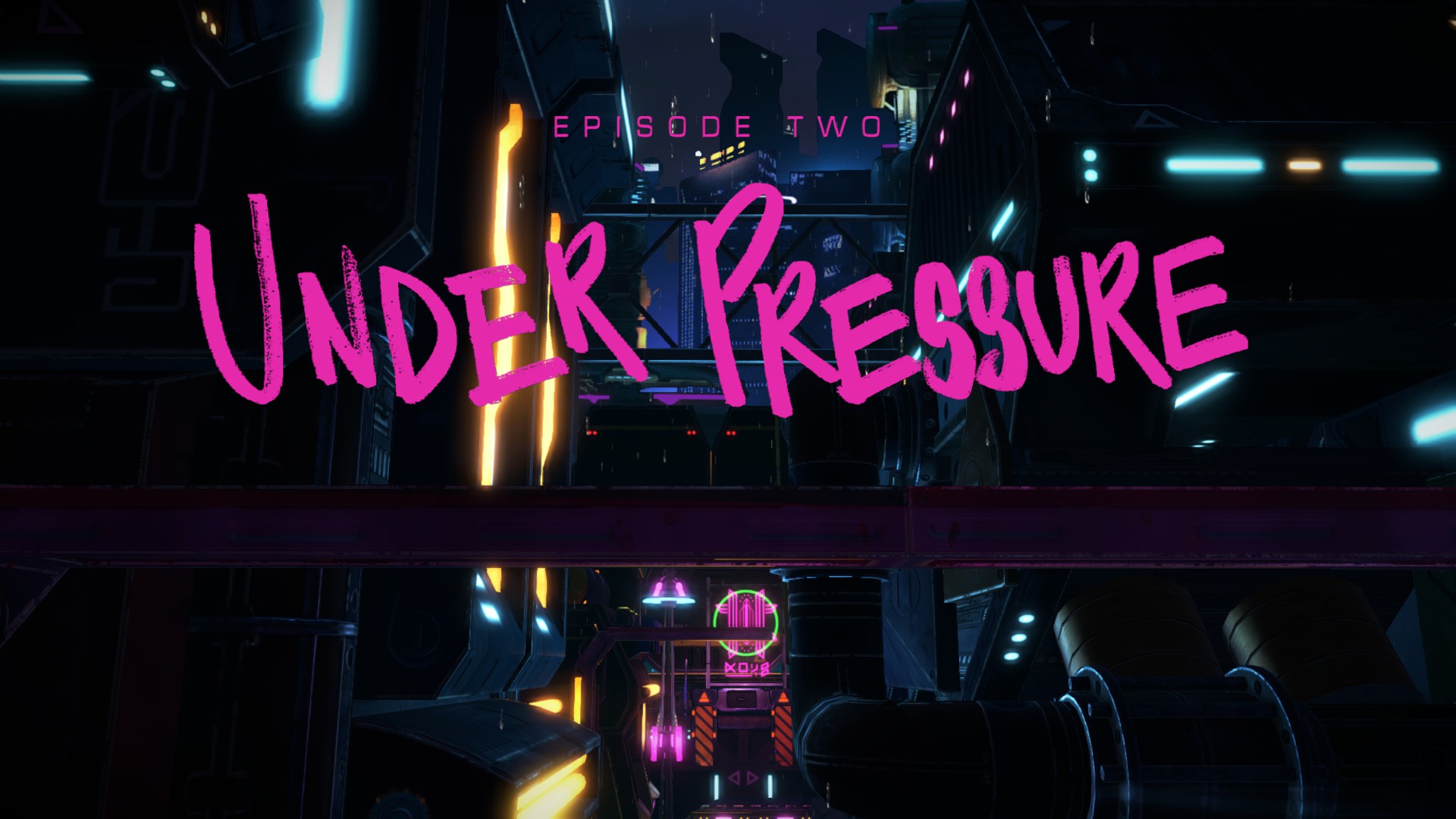 Warning: The following review contains spoilers for Guardians of the Galaxy: The Telltale Series – Episode 1: Tangled Up in Blue.

Coming hot off the heels of the promise of the first episode a couple months back, episode 2 of Guardians of the Galaxy: The Telltale Series is now upon us, like a ravager vessel about to execute some good, old-fashioned pillaging. Like episode 1, Under Pressure has some surprises under its sleeve. None pack quite the amount of punch that pushed me to the praise I gave the first installment, but what we get is still welcome and exciting. Episode 2 makes a few more missteps, though, in the quest to turn up the tension and solve the mysteries of the galaxy.

Another One Bites the Dust

When we last left our dashing heroes, Peter Quill had just experienced something spectacular within the floaty green mysticism of the Eternity Forge. After the magical goblet gives him a vision of his mother, who begs him to come and find her, he awakens to find that the object has also healed him from a fatal stab wound, at the hand of a surprising new foe.  Episode 2 sends the squad off in search of answers as to the item’s purpose. In doing so, it sets some of the super-crew against one another. 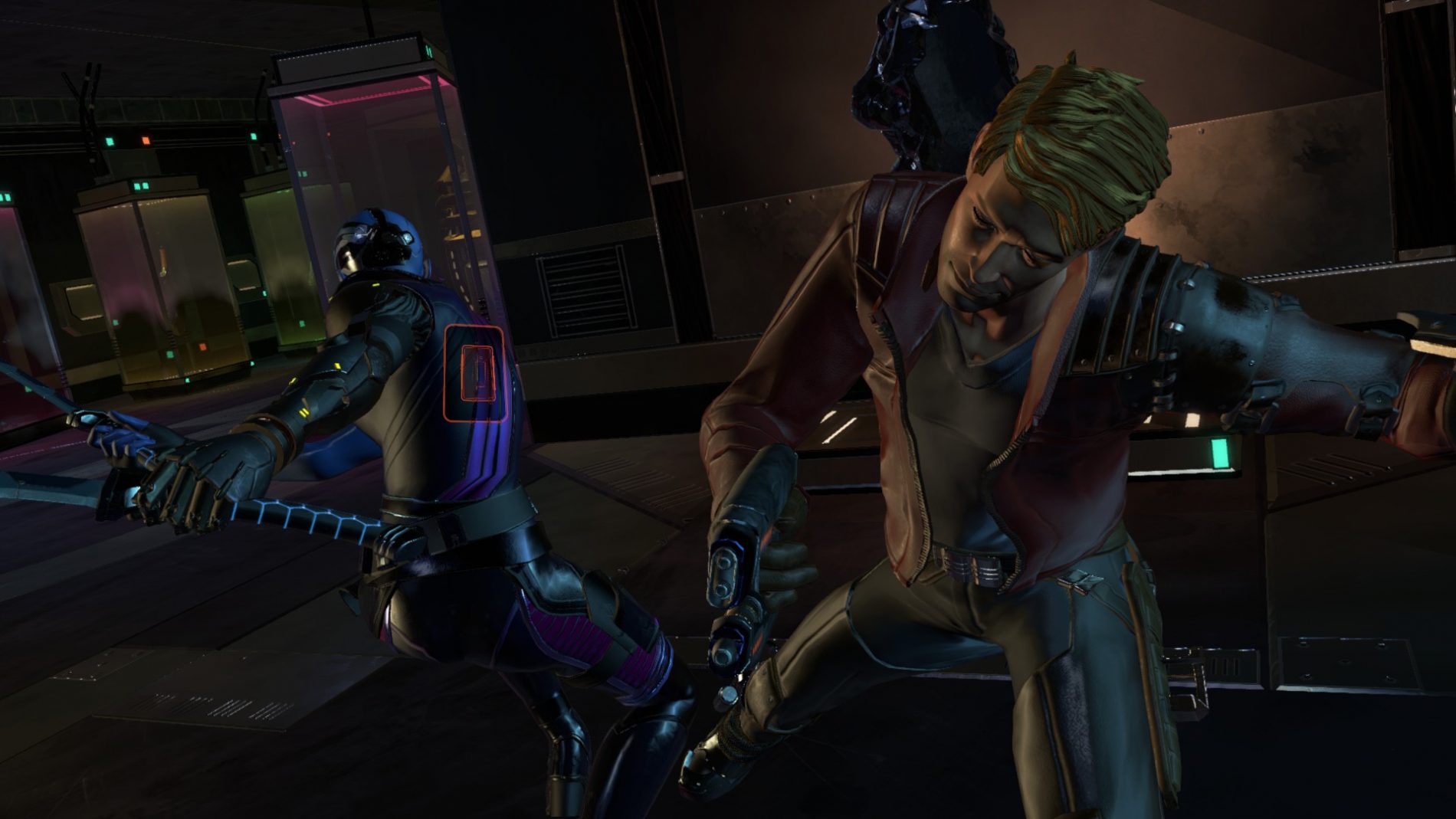 It’s that last point, the conflict between Guardians, that worried me when I was writing my review of Tangled Up in Blue. There, I was forced to engage in side-taking between Rocket and Gamora, and later between Gamora and Drax. It worked within the span of a single episode, but I was really worried that Guardians of the Galaxy: The Telltale Series as a whole was going to be a predictable saga of characters get mad at each other and the player (donning Peter Quill’s jacket), only to come back together at the end.

One of my issues with episode 2 is that it doesn’t really do anything to dissuade my fears. If anything, it handles them worse. There’s a major choice presented in the episode, between hunting down a character for help with a plot-relevant task or following another character on a more personal journey. It’s presented as a big choice. Once again, whoever I chose, the other might question my loyalty. The twist, I learned after the fact, was that regardless of which option I went with, both would happen. It was a classic example of the illusion of choice. It took weight away from my own actions.

Choices be what they may, though, the character writing in Under Pressure continues to defy my expectations. As before, I am continuously impressed by the personal emotional depths TellTale is willing to dive into with each character. I would argue that this is Rocket’s episode more than anyone’s. He gets a lengthy flashback sequence, which invested me as far into his character as two films managed to do, if not more. Drax and Gamora also show the first seeds of major character arcs that I’m hopeful to see in future episodes. 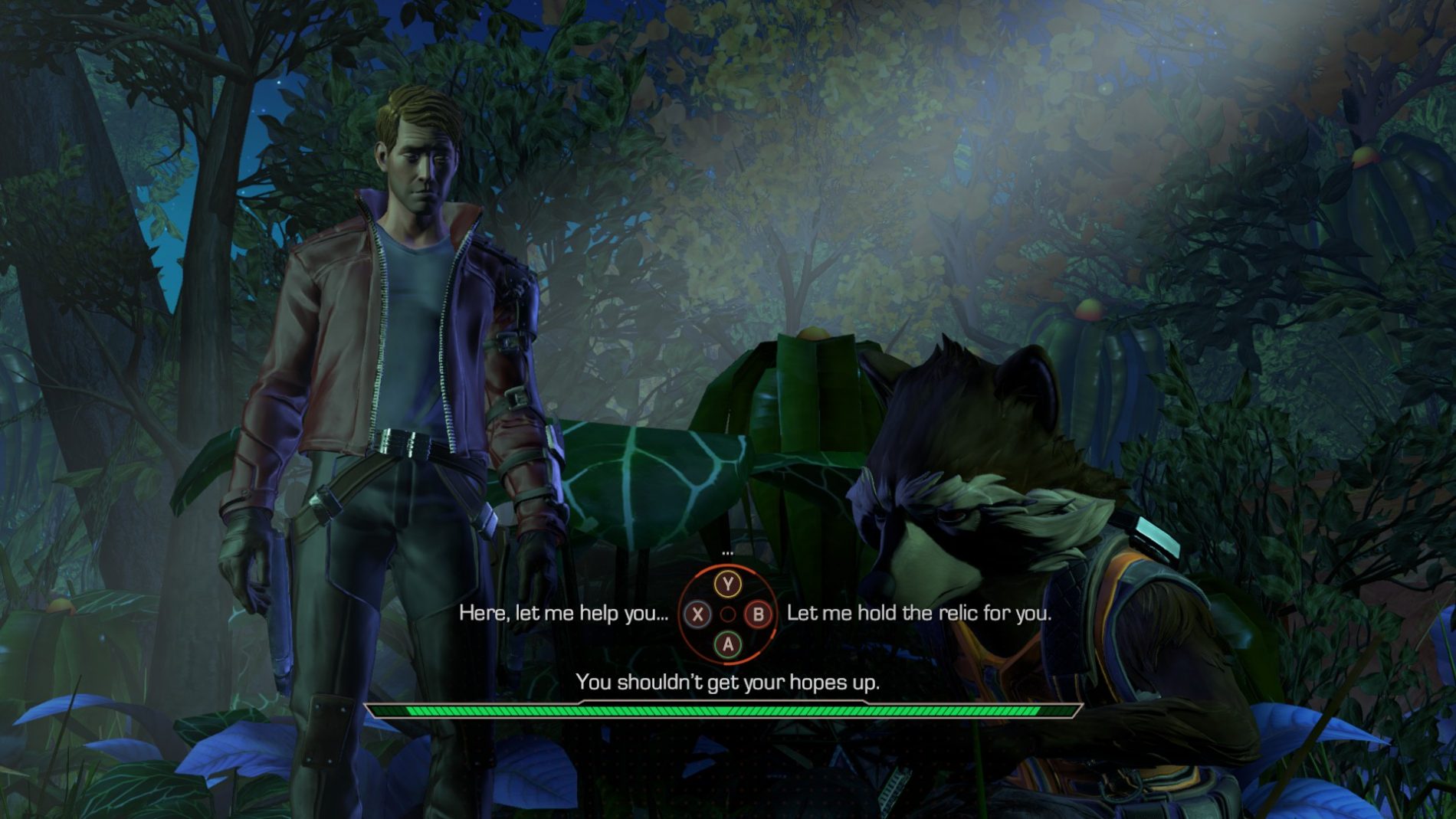 All’s not fun and games, even when you’re a talking raccoon.

The overarching plot in episode 2 goes into both bright-lit constellations and murky depths of space. The highs are fine, as mentioned above. Character development is episode 2’s biggest high by a sky-strung mile. The lows, though, just feel like gaps where more could have been filled. Yondu shows up, following a brief appearance at the end of episode 1. His part if charming, welcome, and then over before you can blink. It’s certainly possible he might show up again later on, but it felt almost cheap to even bother bringing him in so early at all.

The other low in Under Pressure’s story is a matter of necessity. Specifically, it’s a matter of the lack of necessity being ignored by everyone. Nebula enters the story, seen as crucial to decoding a secret message, which becomes the driving force of the episode. This leads to some thrilling moment, but creates one problem. Namely, I was never actually convinced that Nebula was the only one who could help. It was the answer that was closest to the Guardians in terms of degrees of separation (no Kevin Bacon necessary). But the amount of trouble the characters know they’re getting into bashes up against the logic that Nebula the only one who can get the job done.

If Guardians of the Galaxy: The Telltale Series can show us anything, though, it’s how good the studio has finally gotten at creating combat scenarios that work. Episode 1 had one particularly good fight scene, and that was nice. Episode 2 has two, and they’re both even better. It’s continually really encouraging to see what was once TellTale’s single biggest stumbling block (looking at you, FPS segments in The Walking Dead) become not only a non-issue, but a genuine strength. Combat is still a place where the player gets to control more than just Peter Quill, and it feels great to do. Fighting is one thing the Guardians of the Galaxy will always know how to do best as a team. 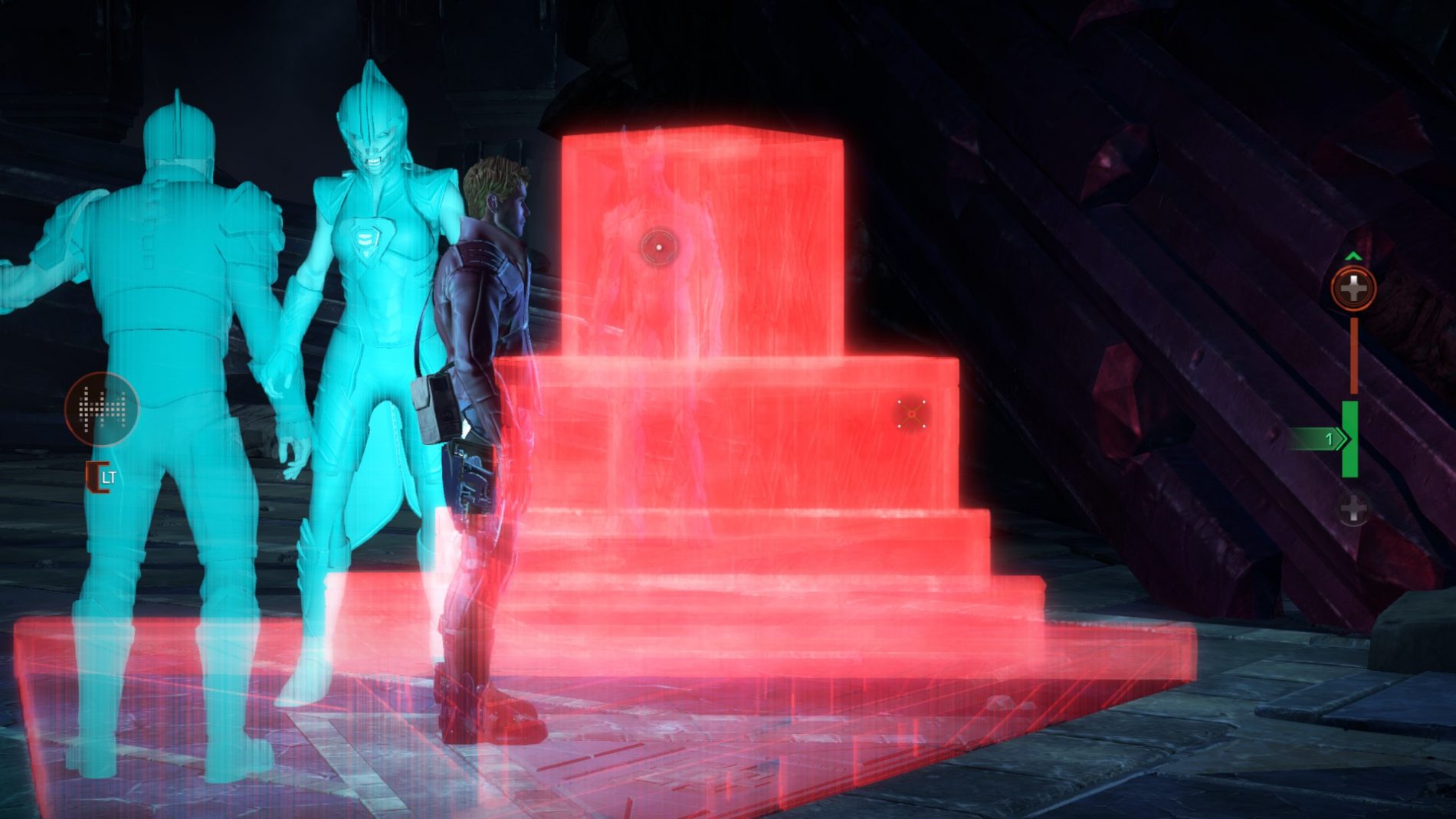 The Time Scanner is back. Back in my day, we called those watches.

Quill’s floaty boots and time scanner also get to have fun again, and start to get just a wee bit more involved as puzzle elements. It’s nothing too major, as puzzles tend to be in TellTale products. Outside of mechanical flourishes like these, there’s nothing particularly new Under Pressure brings to the table. My favorite thing will still always be the point where I can sit down in the captain’s seat of the Milano. For the second episode in a row, checking Peter Quill’s messages has revealed to me some of the best side-humor in the game. It’s not every game where a giant tree-man can forward you an intergalactic chain email.


Guardians of the Galaxy: The Telltale Series – Episode 2: Under Pressure is good, and could have been great. Even if the route some characters are taking gives me unease, the particular problems those characters are given are surprising, and actually lead to a few very challenging choices. It’s an emotional episode. Too bad, then, that very little of that emotion connects to the larger action of the story. Instead, that story falls victim to shrugged excuses used to bring in recognizable characters. It doesn’t fall apart, per se, but I await the next episode to do things better. Except with Nebula, that is. From the moment she finally shows up in Under Pressure, Nebula is magnificent, just as she was always meant to be.