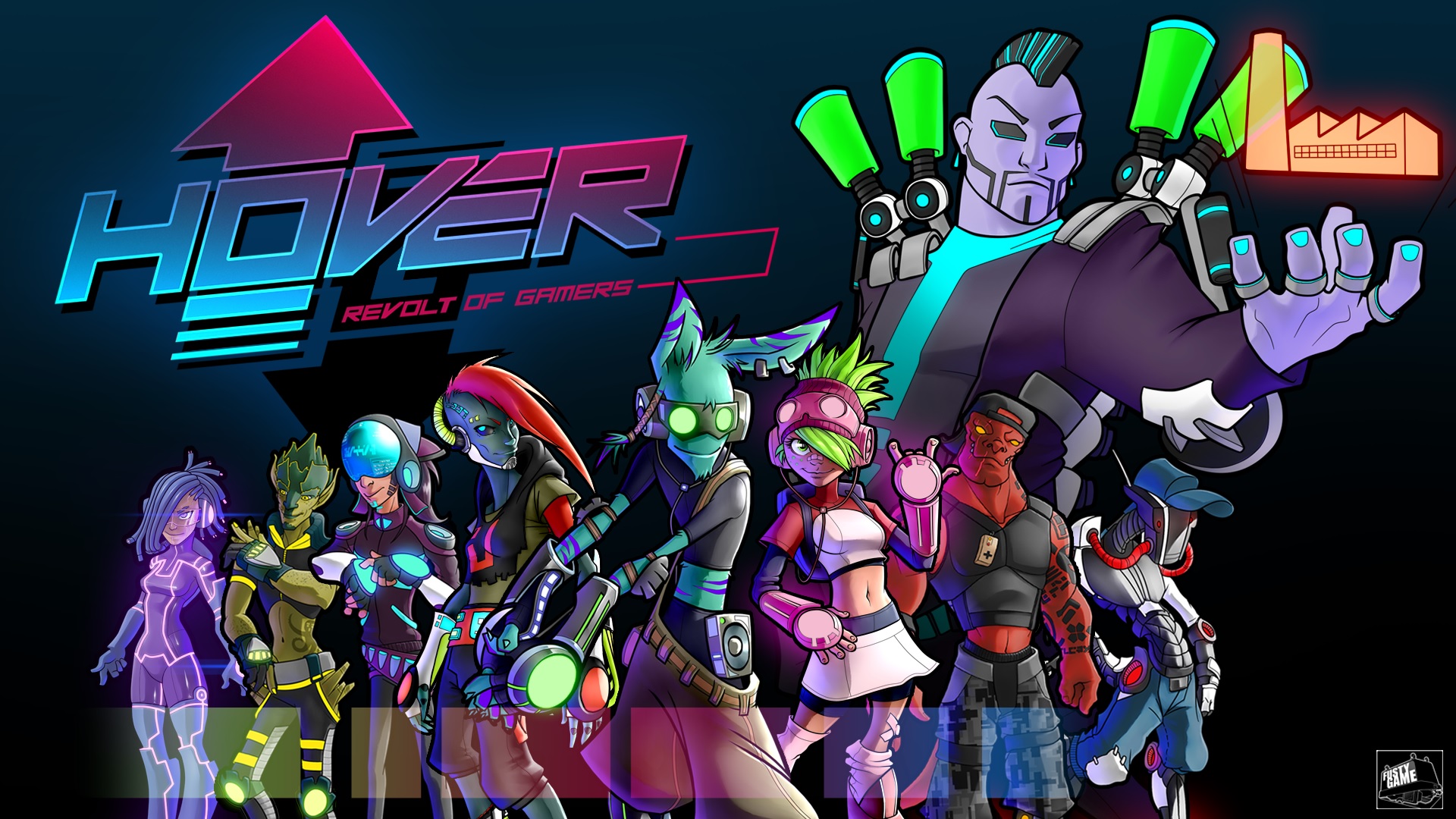 In my many years of playing games, if someone had asked me if I wanted to run around a stylish, largely vertical city in the future, doing high speed parkour stunts to try and save gamers from an oppressive government, I probably would’ve looked back at my time with Mirror’s Edge Catalyst, groaned quietly, and responded with something along the lines of “no, I’d rather not.”

Hover: Revolt of Gamers proves that I would have been wrong.

Hover: Revolt of Gamers was Kickstarted by Midgar Studio (A Studio of three, I might add) back in 2014. They set out on the hefty task of making a fun and unique movement-based gameplay system in a large and interesting open world hub. Central to it all was a cel-shaded aesthetic heavily influenced by Jet Set Radio. Three years later, they finally released the game on Steam. 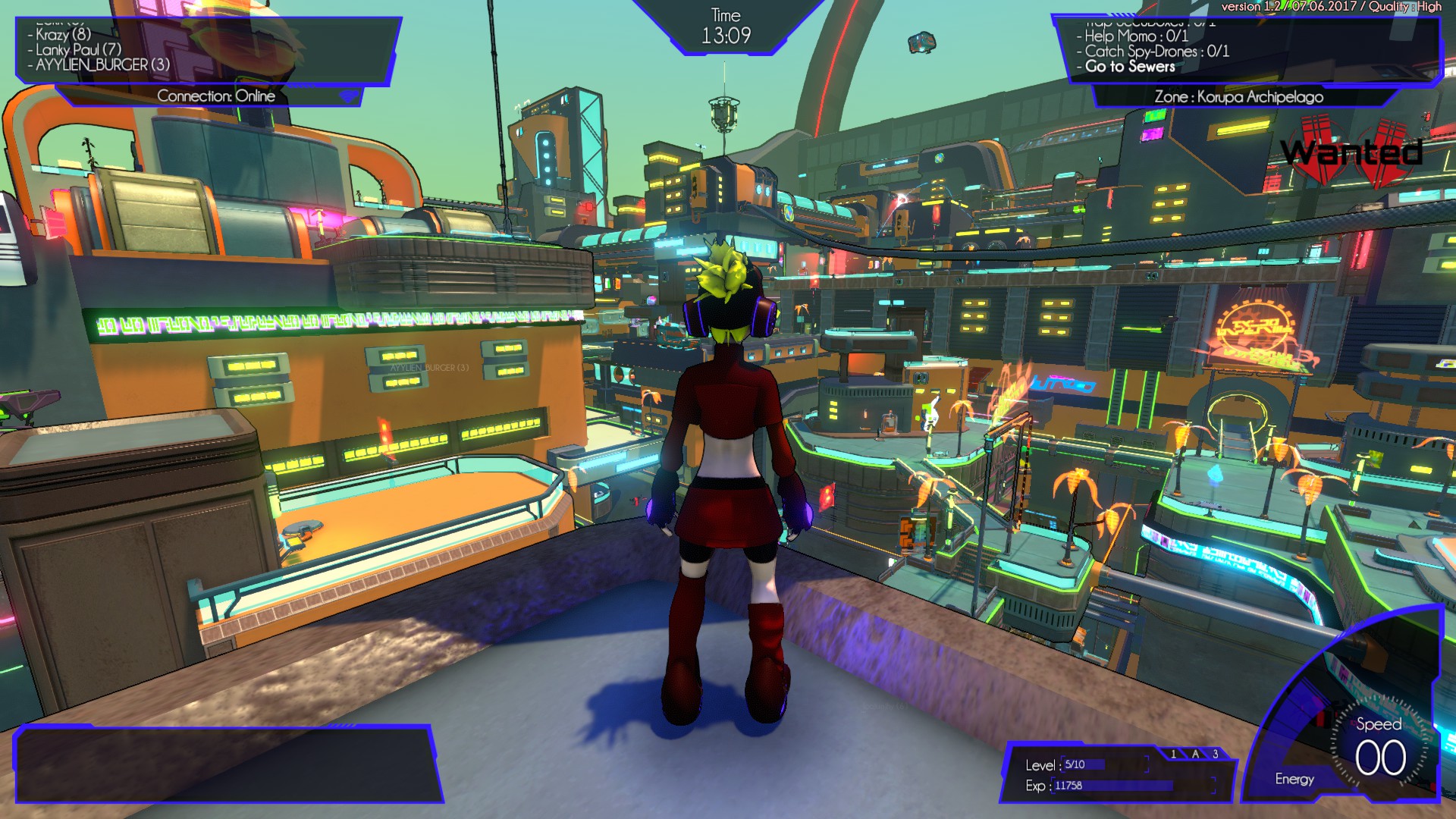 It’s a big, painfully bright world out there.

And succeed they did. The main control scheme is simple. You have jump and slide buttons. The slide also doubles as a trick button while airborne, and a grind button near rails.  By doing tricks in the air, grinding, and sliding around, you build up a heat-up gauge which increases the base speed of your already ridiculously fast character. The more you chain together, the more the gauge fills. It’s a simple setup, but it requires balancing momentum and coordination.  I’ve seen some people argue it’s a bit floaty, but I would counter that, honestly, that just gives you more air time to plan your next move, and is paced just right.

On top of that, there is a third multifunctional button. Holding it brings up a scanner, which allows you to see races, collectibles, chests and players. It also unlocks chests. You can double-tap to shake your spray can, releasing to tag any service you deem fit! There’s also a simple rewind button. It doesn’t rewind time or anything, just your character and their movement path. In Hover City, one wrong jump can easily put you seemingly miles away from the race you’re trying to run. These are the tools you’ll use to navigate Hover City, your home turf and the open hub of the game.

Hover City is unique in the sense that, instead of an outward-expanding city, it builds upwards. On the bottom sits a ghetto. The further up you go in the glowing neon, the nicer it gets. The design is actually pretty unorthodox, and it’s obvious that it was designed as a playground first, and a city second. That doesn’t really matter, though, because it succeeds in being the open world hub it aims to be. 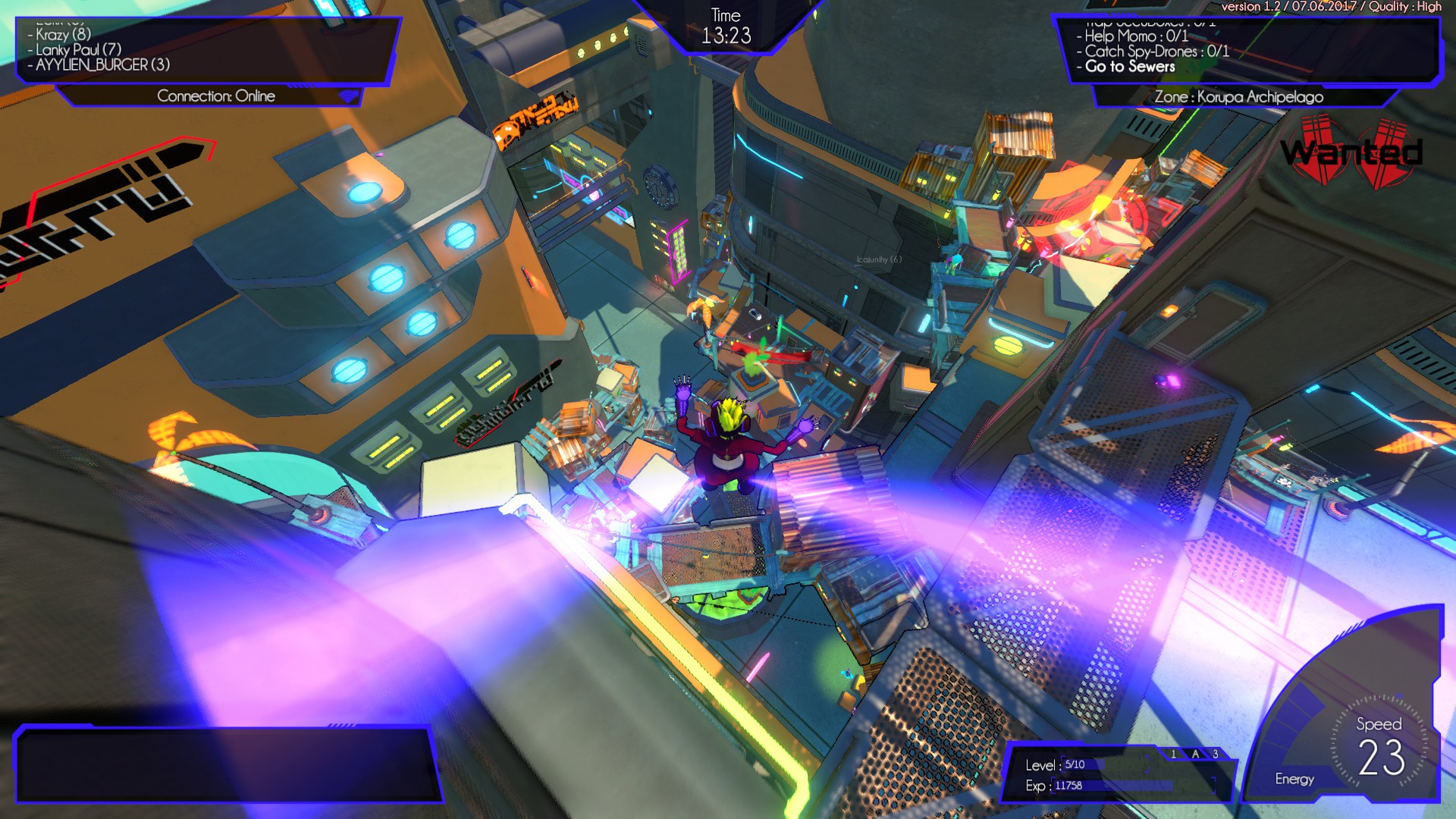 What goes up must come down, and down, and oh no, oh god, oh god that’s so far

The layout of Hover: Revolt of Gamers also includes sewer and prison areas. These areas, while not comparable in size to the main hub, both offer their own spin on activities.  The sewer area functions more as a race track and Gameball arena, where players can run around and challenge one another. On the opposite end, the prison requires stealth and a slower, more thoughtful approach to complete infiltration missions.

The story is there primarily as a medium to give you an excuse to run around Hover City. The Administrator of the city has outlawed all forms of entertainment. As the player character, you are a clone of a member from a resistance group. You spend the game racing others, retrieving and returning stolen game consoles to citizens, and defacing Government propaganda.

A Day at the Races

Throughout the world you have a typical open world checklist of things to do. There are spy drones and various collectibles to chase down, rogue gamers to hunt, signs to fly full speed into, and plenty else. Even when aimlessly wandering around, I found myself often distracted by interesting side objectives. There are objectives you can do for other characters, as either main or side missions.  These can vary, but the most common were races/time trials, deliveries, and Gameball. 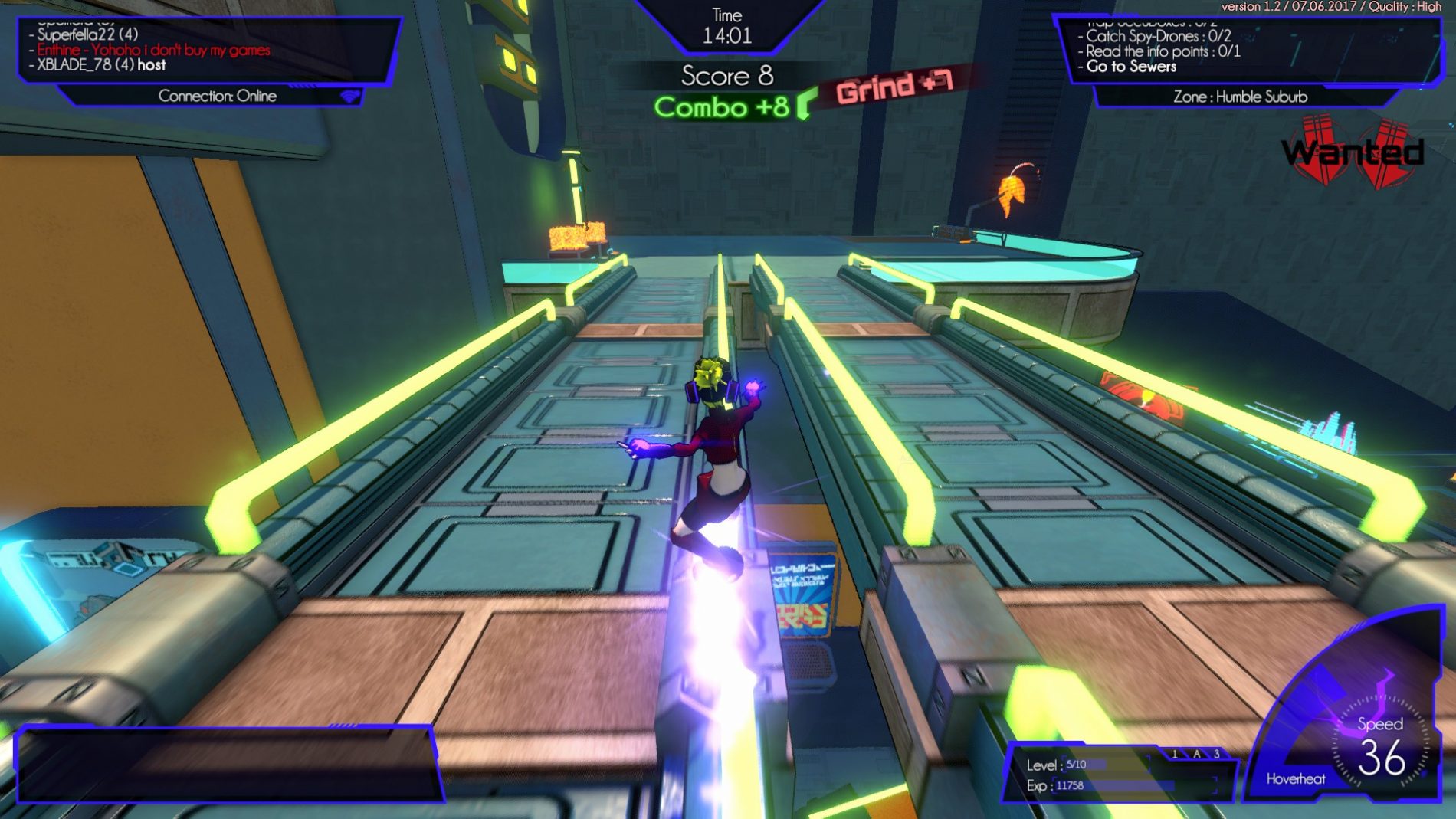 Everyone is The Flash on a Light Cycle, and everything is good.

Races and time trials are both the main focuses and biggest successes of Hover: Revolt of Gamers. In a race across Hover City, you follow a series of checkpoints while you jump, slide, grind and climb to victory against other players or NPCs. Difficulty varies; in early races, I left NPCs in the dust, until I stumbled upon later ones where I was significantly outpaced.

Gameball is the other larger mode. Simply put, it’s a violent game of football. Players are split off into teams, and a ball drops into the middle of the ‘arena’ (typically improvised sewer pipes or hallways) with a goal on each. While holding the ball, your scan button becomes a throw button, allowing you that extra bit of ball mobility as well. The catch is that when you’re holding the ball, if you collide with other players in any way, you automatically drop it. When there are 6 people flying around into each other, things get a little crazy.

Lastly is deliveries, where you return stolen game consoles to their rightful owner. This is just kind of a variation of Gameball, where the ball keeps respawning in the same spot. Players have to hit multiple different goals to return the consoles in the allotted amount of time. Rewind will be your friend in this mode, and the authorities that try to catch you will be the opposite.

This is where the online aspect of Hover: Revolt of Gamers comes into play, and it’s actually pretty neat. While in Hover City or the sewers, there is a constant connection with other players around the city. At any point that they start a race or a match of gameball or anything of that nature, the game will openly invite other players to also participate in the race.  There were multiple times over the course of my time with this game that I ran into other players beginning time trials and I joined in, turning it into an exciting race between hyper-athletic gamers.

As the game starts, you only have one character, with more to unlock as you progress. The downside to this is the that the only customization choices are color palettes. These characters all have unique stats, which can be altered with a card customization engine. As you go around completing objectives and opening random chests, you’ll get cards that can augment speed and strength, to be equipped into a deck. You can even have a team of 5 gamers that can be interchanged at any time, to form a well-balanced team.

Unfortunately, Hover: Revolt of Gamers isn’t all jumping and rainbows. However – and I believe this works more in its favor – there isn’t a particularly major flaw that jumps out at me, as much as a culmination of many much smaller ones.

The game does not have a mini-map. This means the scanner is the only way to locate objectives and players. This offers a unique way of looking around and exploring the city, which is both neat, and not. It becomes bothersome when certain objectives are too far to see, or players are moving too fast to actually keep track of.

A couple other flaws actually affect gameplay; namely deliveries and gameball. When you join a Gameball match or a delivery, the game fails to inform you of where the ball actually spawns, and where any of the goals are, until the mission starts. This issue is echoed in deliveries. Say I’m trying to get to a delivery point, but I accidently botch the jump, falling 40 floors to the bottom of the city.  The rewind button makes this easy to manage.  However, If you rewind with the package in hand, the package will actually fall where you started the rewind. Dropping it the entire way down will respawn in time, but cost you the mission. 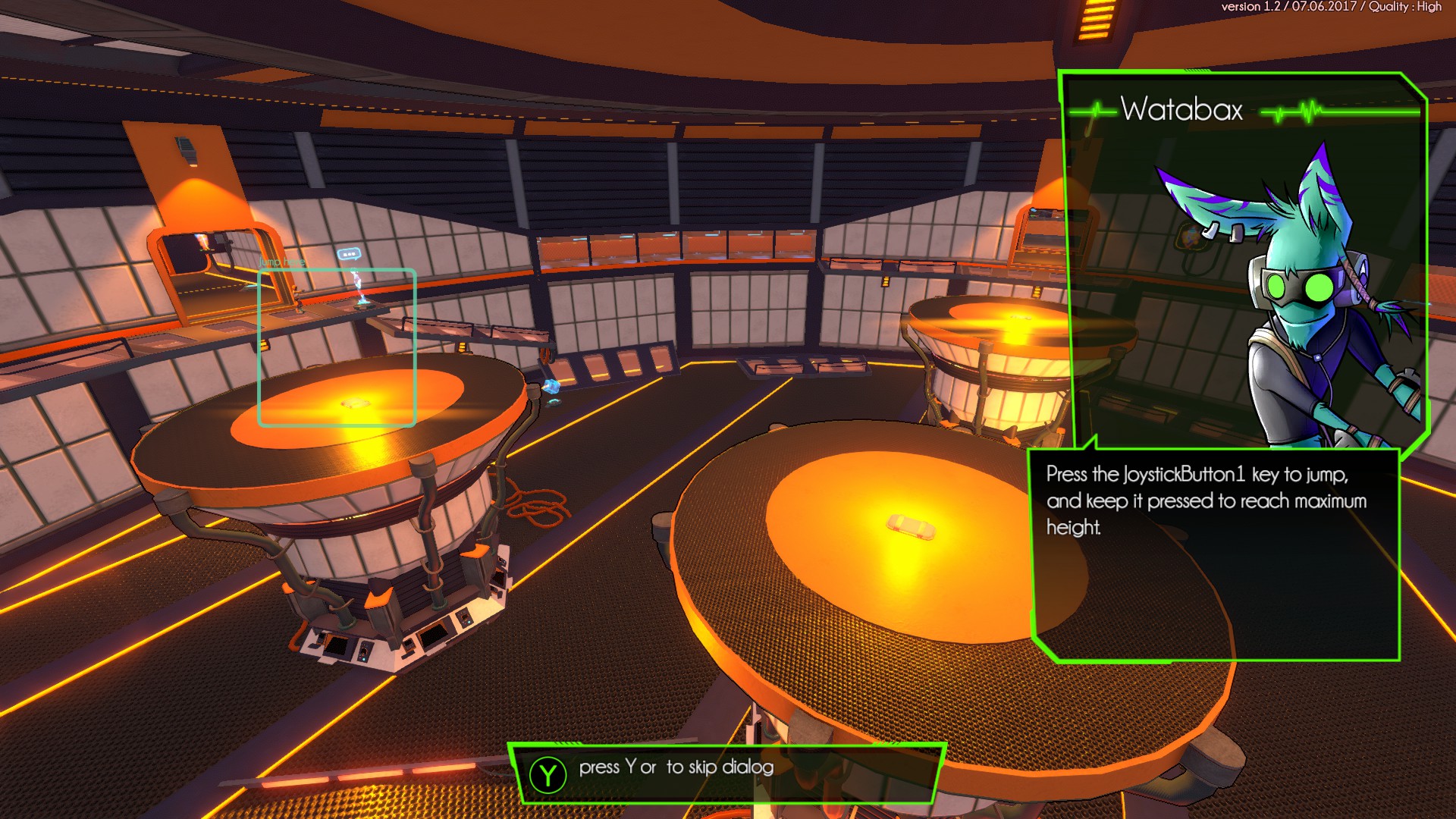 Also, they could have thought through controller support a bit better.

The races aren’t without faults either. While you see the checkpoints before the race starts, every race follows Ricky Bobby’s ideology: “if you’re not first, you’re last.” If you don’t get first place in a race, you automatically lose. Sometimes these races are story missions, which can injure progress. If other players join your race with a much better deck than yours, all could be lost from the beginning.

While obviously secondary, the story and characters in Hover: Revolt of Gamers didn’t feel compelling to me at all. I’ve been trying to figure out how to describe it, and I think I finally figured it out. Has anyone reading this ever played one of those super cheesy Korean MMOs? (If not, congratulations, you are a far more sane person than I). The game introduces you to a ton of characters with neat designs, but no real explanation, and then marches you off to do whatever with no real reason why.

Speeding Past the Finish Line

Missteps asides, there was no point during this game that I wasn’t enjoying myself. Despite the flaws, I found myself grinning in delight and shouting “Weeeeee!” across my apartment (much to my roommates displeasure). Hover: Revolt of Gamers is a game I drew a lot of entertainment from. While the story and character interaction is subpar and some design choices are questionable, the controls are solid and functional, and running around the neon streets at high speeds with other players always provided a rush.

Full disclosure: This review is based on a copy of Hover: Revolt of Gamers given to Hey Poor Player by the publisher. 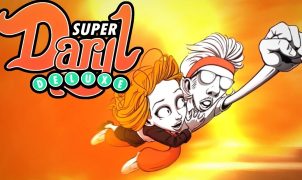 Silence is Golden Wow. Super Daryl Deluxe. What a game this ended up being. I can’t even say that I expecting anything in particular when I first started playing…