In space, no one can hear you die over and over again. 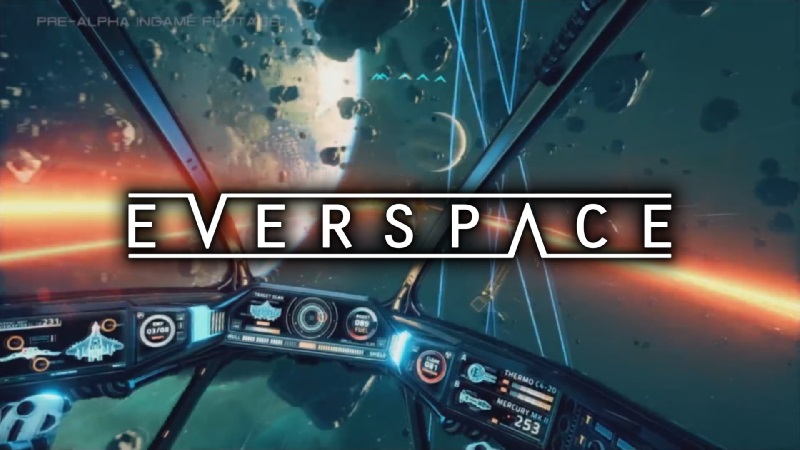 It’s hard to come up with anything that EVERSPACE really does wrong. It’s an absolutely gorgeous shooter with a great soundtrack that manages to breathe life into not one, but two extremely stale genres – space sims and roguelikes. It’s smartly-paced, rewards exploration and skill and even has pretty good voice acting for such a small game.

And yet, I kept watching the timer in my Steam library, wondering if I’d played enough to do the review. And after a few hours, I muted the game’s stellar audio entirely and starting listening to podcasts while I played instead. 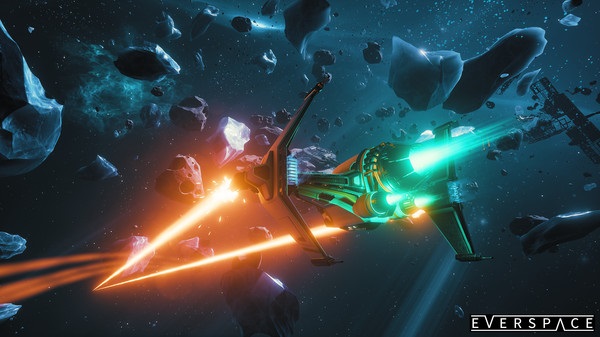 Okay, let’s talk about all the stuff EVERSPACE does right. The first thing you’ll notice when you start up the game is that you’re having a hard time forming coherent sentences. That’s because your jaw has dropped all the way to the floor at the sight of space graphics so good they genuinely put some recent sci-fi Hollywood blockbusters to shame. Not only are the graphics beautifully rendered, but they’re responsive – your starship glitters as lasers scream across its bow, striking with a puff of smoke and a new permanent dent, the colors fading to rich purples as you take cover behind a patch of glowing crystals and watch charge building up in your rear engines as you prepare to boost to safety. Sure, it’s not like this is the first game to introduce dramatic lighting, but the devil here is in the details, like the shimmering heat waves behind your engines that actually look like proper heat waves, not just like someone’s rapidly changing the settings on the Photoshop blur tool.

The best part? It manages to be the best-looking game of the year (maybe of the past several years) while still moving quickly and fluidly, even when I tried playing it on my laptop at the highest settings. In fact, throughout my time with the game I haven’t experienced a single technical issue – not even so much as a framerate dip.

The sound design, too, goes a long way towards making the game great. The soundtrack is full of pleasantly bluesy rock that lands the game halfway between StarCraft II and Guardians of the Galaxy – not bad company to be in. The voice acting, too, is well-executed – particularly the unnamed (as far as I know) JARVIS-like AI that helps control your ship. But (and we don’t say this often) the real star of the show is the sound effects, which manage to feel simultaneously familiar to anyone who likes spaceship shows and yet completely unique. The game’s satisfying combat can be attributed almost entirely to the sound design – the crackle of lasers making contact, the roar of the gatling gun, the satisfying WHOOMPH of the massive three-stage explosion that happens when you take down a massive Corvette – when combined with the graphics, it creates a package that’s truly breathtaking.

If you grew up wishing that you could know what it’s like to live through the thrill of a Star Wars dogfight, then EVERSPACE is the closest you’re ever likely to get. And if you didn’t grow up wishing for that, then you’re a damn dirty liar and yes you did.

Stress on the hyperdrive. 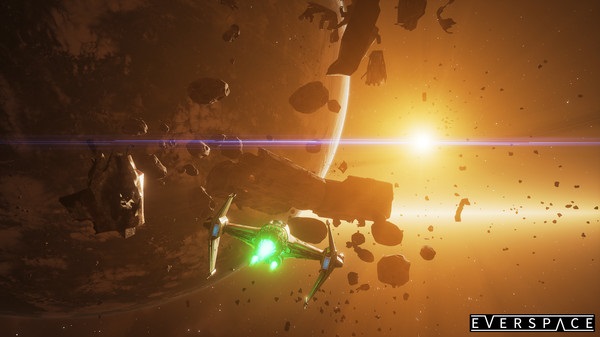 I hesitate to call EVERSPACE a “roguelike,” because using that word will bring up some really inaccurate comparisons in your mind. This isn’t another by-the-book dungeon-crawling Binding of Isaac clone. Its closest point of reference would probably be FTL: Faster Than Light. The game takes place across a series of procedurally-generated missions taking place in a small area, but the procedural generation is actually smart, keeping things varied but not randomizing things to the extent that you can expect extremely difficult enemies in the first mission. Far from being a RNG crapshoot like so many of its wretched brethren, EVERSPACE feels like a complete campaign experience – one that will be different every time you play.

Getting to the next mission requires you to make a hyperspace jump requiring 25 fuel, and collecting that fuel becomes the primary goal of each level (though you start off with 100, so it’s possible to just skip some levels entirely.) Of course, if you actually want to live long enough to collect said fuel, you’re also going to want to spend time collecting crafting materials. This can be done by shooting down enemy ships for credits, scavenging derelict ships in a manner very reminiscent of Rey’s first scene in The Force Awakens (this really does feel like a Star Wars game that just couldn’t get the license), attempting to raid heavily-guarded cargo vessels, or participating in everyone’s favorite sci-fi game mechanic – collecting minerals! These materials can in turn be used to build better weapons, repair or upgrade parts of your ship, or sold to passing traders for new equipment (which you can also often find drifting through space.) These materials are lost when you die, with the exception of credits, which can be spent on permanent upgrades between runs (but, interestingly, not during them.) 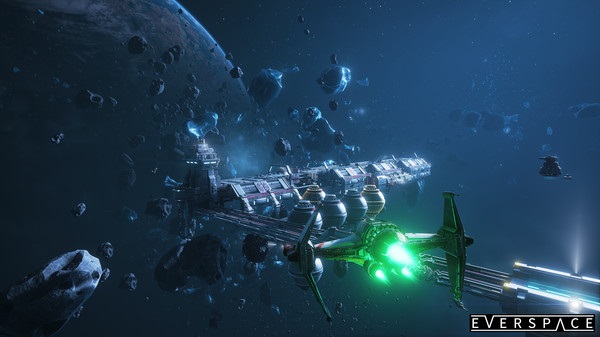 And it’s here that the game sorta starts to fall apart for me. All of these things are competently-executed, and the pickups and weapons you get are nicely varied, from weak homing projectiles to powerful energy-draining laser beams and everything in between. You also have your choice of three different base ships when you start a run, each of which plays very differently from the other two – there’s the strong but slow gunship with a mounted turret, a fast recon fighter with a cloaking device, and a comfortable middle ground.

But despite this variety, the game still gets old fast. The problem is that it feels like there’s very little urgency or tension to gameplay – choosing to participate in combat or in the collection of materials is completely voluntary, as even the missions where you have to actually fly into a jumpgate can be boosted through with very little interaction. Sure, your ship will explode if you try to make multiple jumps without enough fuel, but that just gives you a chance to go back to the upgrade screen. I think part of the problem lies in the fact that death doesn’t take you back to the start of the campaign like in FTL or in more traditional roguelikes. As a result, it doesn’t feel like you’re slowly getting better and better at a difficult game until you hit that first glorious complete run; it just feels like you’re making progress one frustratingly tiny chunk of game at a time. And if I wanted to feel like I was making tiny increments of progress towards a nebulous, ill-defined goal, I’d just turn off the game and go back to my actual real life. 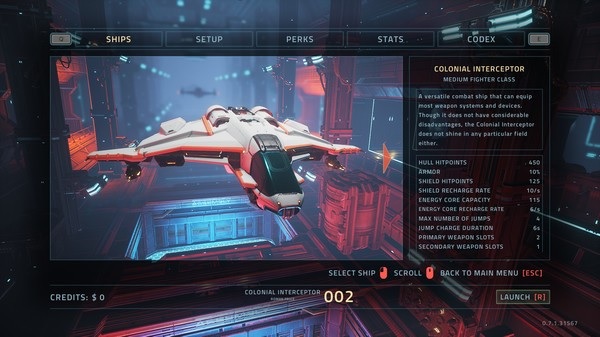 There’s a story, and as a writer I appreciate the ambitious decision to try and design a narrative around to the nigh-infinite possibilities of a roguelike, moving ever forward while still responding to things that are happening on your screen. Unfortunately, it’s not very good. The setup is as Videogames as videogames get – you wake up with amnesia, steal a ship, and try to piece together your mysterious backstory through clues from the world. Except you don’t, because the big reveal of your mysterious backstory is revealed when you complete the first sector (four or five missions long depending on the route you take.) There’s some interesting stuff about a war against an alien race that seems like it’s mostly the humans’ fault, but any sympathy you might have for the creatures is completely undermined by gameplay objectives like “kill 50 Okkar in a single run” and the gleeful achievements you get for doing so. So in the end, it’s a cool way of telling a bad story.

Fans of space shooters or of innovative roguelikes will find a lot to love in EVERSPACE. Its stellar presentation makes it one of the rare games that truly deserves to be called “immersive”, and from what I hear that’s only more true if you play it in VR (I don’t have a VR headset because I make game journalist money, but by all accounts it runs very smoothly on both the Vive and the Oculus Rift.) But it’s also a game that’s mostly about pixel-hunting on your radar for the closest crafting materials, a game where success depends on you repeatedly making the conscious choice to gather minerals. And that’s a choice I personally still have difficulty making.

Full disclosure: This review is based on a PC review copy of EVERSPACE given to HeyPoorPlayer by the publisher. 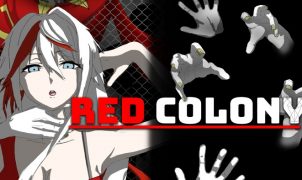 Zombies and Bazongas on Mars. Of Course.      Red Colony, from developer RunicCodes, ticks a lot of boxes in the B-horror movie category. A mad scientist experimenting with…