The Pentameter is there, but the prose needs some work.


It’s not exactly an uncommon start; you wake up on a beach, with no real hint of where you’ve come from. There’s a grand sense of mystery, plenty of land to explore, and you even find a helpful companion along the way. You’re searching for something. Something important. The setup of RiME is familiar. At it goes on, though, the adventure in store in RiME is much more of its own world than of anything it can be compared to; for better and for worse. One part Journey, one part Uncharted, RiME tells a dialogueless story that doesn’t meet all the marks that it could, but whose ideas left me truly contemplative at journey’s end.

Ruins on an Elder Shore

RiME takes its time at the outset. A lot of its length revolves around puzzle design, but out the very beginning, there’s a lot of raw visual beauty to take in. So hey, let’s start there. There’s an obvious homage to the cell-shaded seaside visuals of Wind Waker in the design of RiME‘s world. As your young protagonist explores and meets the small fox spirit that will serve as guide and companion along the journey, there’s a lot to see. RiME has an expertly well-unified visual style. The island’s ruins, and everything one will eventually find beyond, all feel like part of the same, very old culture. Later on, the game sports what I will swear to my grave is some very intentional visual reference to the writing of Ralph Waldo Emerson. Even if I’m completely misdirected, the fact that RiME‘s art direction was able to draw that response is applaudable. In my time in RiME‘s first world, I sometimes found myself just wanting to pause and take in my surroundings. 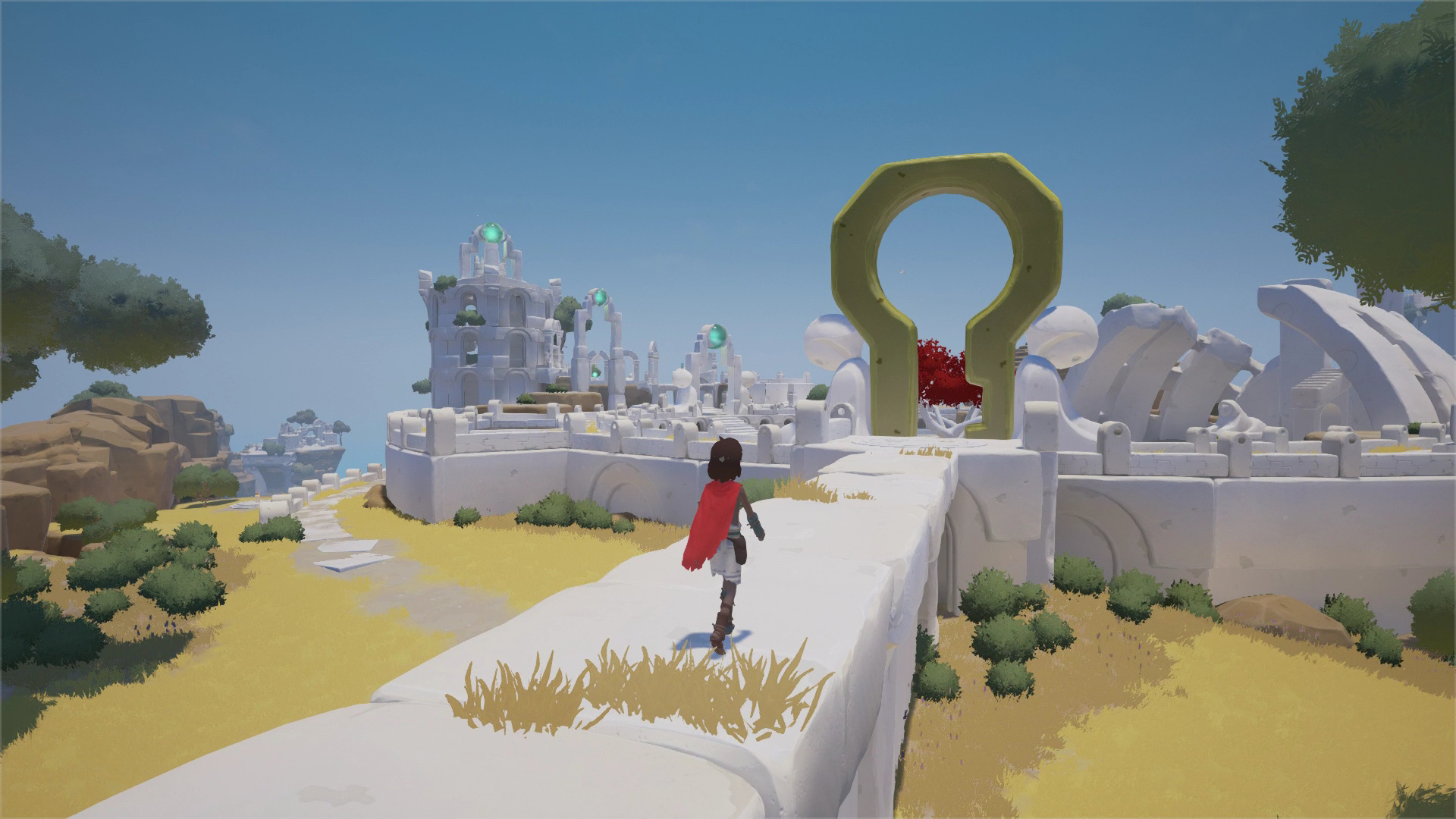 And what a beautiful place you must have been.

Over its six to eight hour length, the game will take you across more than just what the world first appears to be. The threads between island and desert and forest aren’t established very well, a fact which makes more sense upon completion, but there’s a level of detail in art direction that rivals the best. There’s constant play with light and shadow, and with different colors. When you see gold, you know that the gold thing is essential to the puzzle you need to solve. When you see opalescent, glowing teal, you know it’s also important, in a different way.

As for the design of RiME‘s puzzles and four main worlds, I was both surprised and disappointed. Things start off strong. That first world is a beautiful and open island, with plenty of little nooks and crannies to look through as the player sees fit. Once you complete the first puzzle, waking up a quartet of Princess Mononoke-like spirits to help you meet your adorable fox friend, things are off to a good start. You have a guide, but the game has already taught you by then that freedom is important. You can always go see how far you can climb down that ledge over there. Want to take a swim with some incandescent jellyfish? Breaststroke away. The puzzles that pepper the path through the game’s first leg aren’t revolutionary, but introduce some neat concepts. The main character’s voice is his key tool, shouting at glowing spirit-rich totems to awaken the small helpers within. There are some block puzzles, and even a couple that use the random wildlife in the environment in clever ways. The exploration is extremely Uncharted-like, from the cliffs below to the old, crumbling structures above. 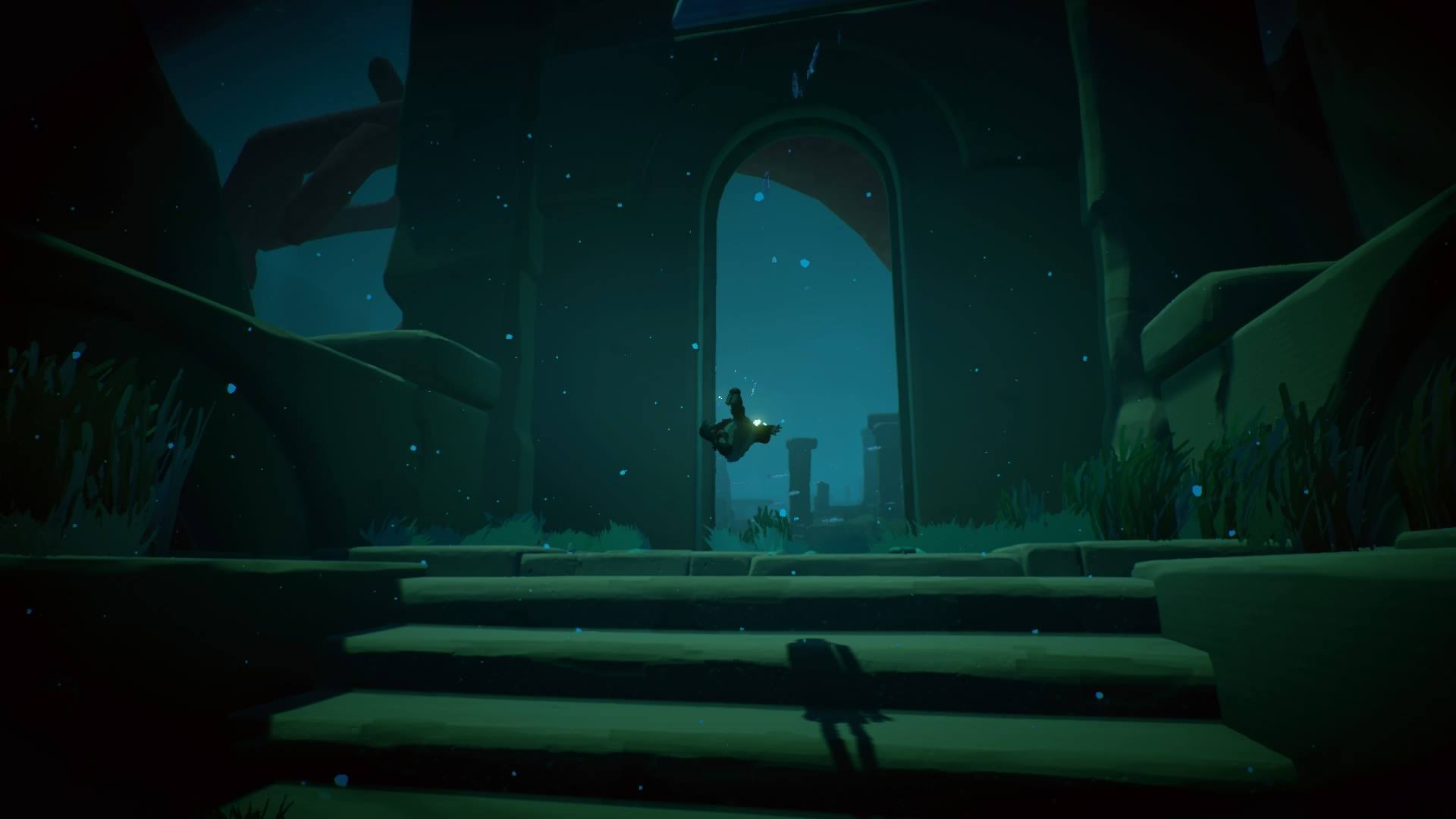 But hey, at least while you’re hiding, you can go for a nice swim. As long as you don’t drown.

It’s an absolute shame, then, that no part of RiME after this first stretch is able to commit in the same way. Not too long after everything I’m describing, you find yourself in a completely different locale where exploration is constantly punished. Everything you were taught about how to interact with the world around you has been broken. It’s crazy to me that RiME opens with such a unified emphasis on freedom, and then forces the player through running and hiding, trying to get to the next silently-articulated objective. Even after that, RiME stays a lot more linear for a while than it started out. It’s all still stunningly beautiful, no doubt. But beauty can only go so far when it feels like the game bait-and-switched on its initial promise.

Lord, Send Me a Mechanic

RiME’s biggest frustration, though, is its puzzle mechanics. I noticed a pattern here. Each world would introduce some cool new idea. One would have stationary objects that would turn to face the player character when he shouted at them, moving whatever they were attached to in the process. My favorite puzzles in the game were perspective-based. The player would stand on a pedestal, viewing an array of carefully-aligned objects, and moving the camera around so they could all line up, the right angle causing them to come together to flatten against something behind or even in front of them. You can form a door, make something small turn big; anything, potentially. The ideas in their infancy in RiME are nothing short of great.

But here’s the problem. None of them are fleshed out completely. Every time I started to really like the way a mechanic was being utilized, it would stop showing up altogether. None of the elements at work are given enough time to get complex, and as a result, the game never really gets challenging. A couple later puzzles get complicated, sure, but not in a way that requires deep thought. They’re just long. 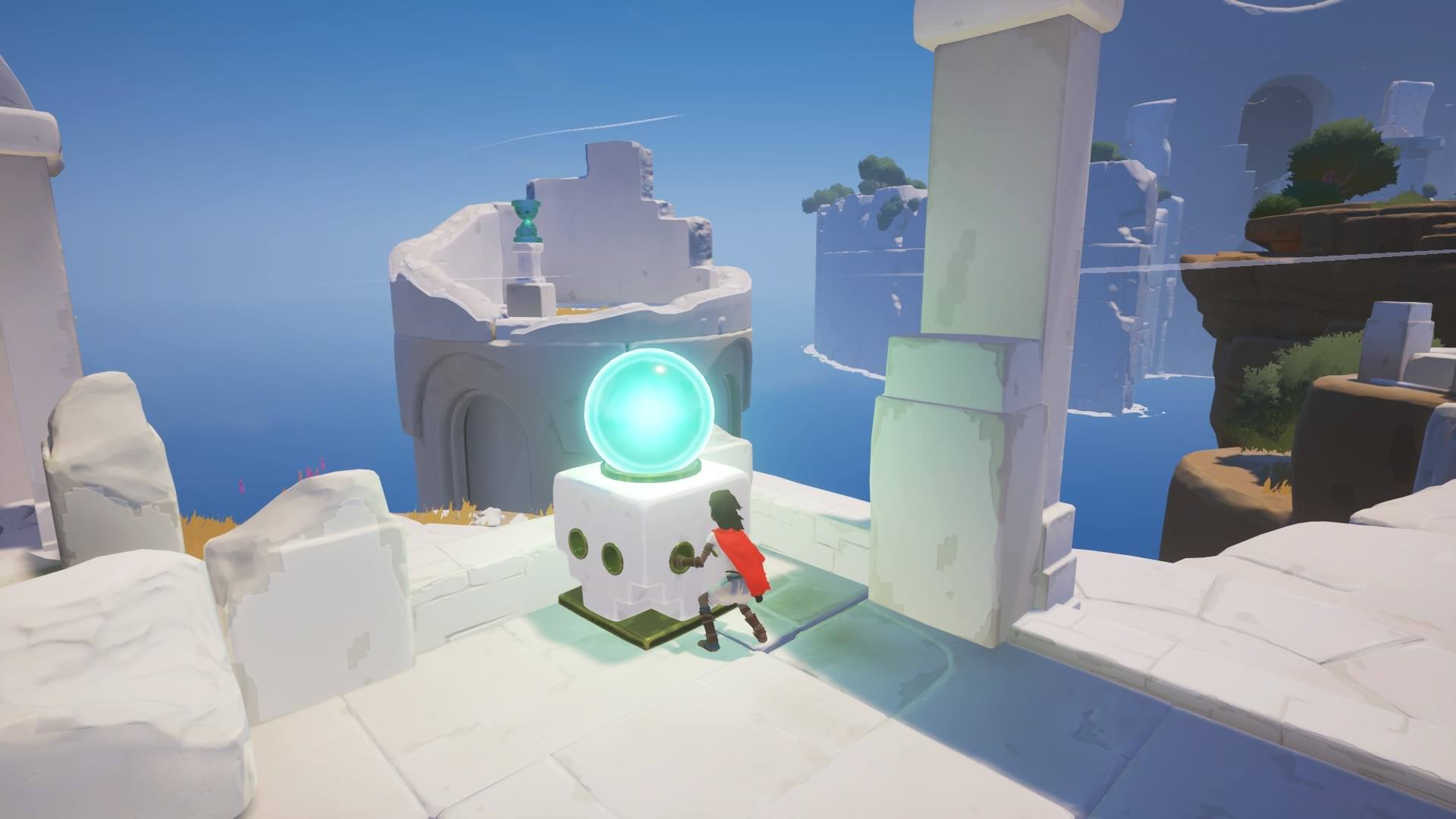 “Alright, I know you’ve heard about pushing blocks, but what about FANTASY pushing FANTASY blocks?”

In a narrative-based puzzle game like RiME, there are two basic approaches that work. One is the Portal 2 method. In Portal 2, the first third of the game is spent reintroducing the player to old mechanics from the first game, with a healthy dose of new ones applied at an even pace. The second third introduces more new ideas. The final leg ties all of these ideas together, bringing together everything you’ve learned. The other approach would be to fully flesh out a mechanic within it’s isolatory leg of the game, and then lay it to rest after its hard work. The problem with RiME is that it does neither. All of its ideas are good, but we seldom get to see them at their best.

Subtext in the Seabreeze

I hit a point in RiME, not too far from journey’s end, where I really felt something. There’s a moment in the young hero’s search where hope is extended, and pulled back away. RiME is structured around the stages of grief, and watching the depression that follows the bargaining is probably the heaviest and most mortal the game gets. At it’s core, RiME tells a very personal story about the grieving process. I just wish it didn’t spend so much time stuffing that metaphor full of complications that get little follow-through.

One of the reasons the game gets an endless slew of comparisons to Journey lodged its way is because of its use of silent storytelling. All these ancient structures came from somewhere, after all. And, again, this is a place where the game starts out really strong. You’ll find the occasional painting on a wall that seems to be telling part of a story, and you want to know more. As things go on, though, the story becomes less and less comprehensible. There’s a late-game twist that will change the player’s perspective on what the purpose of a lot of that subtle storytelling was, and honestly, it gets cheapened further in the process. 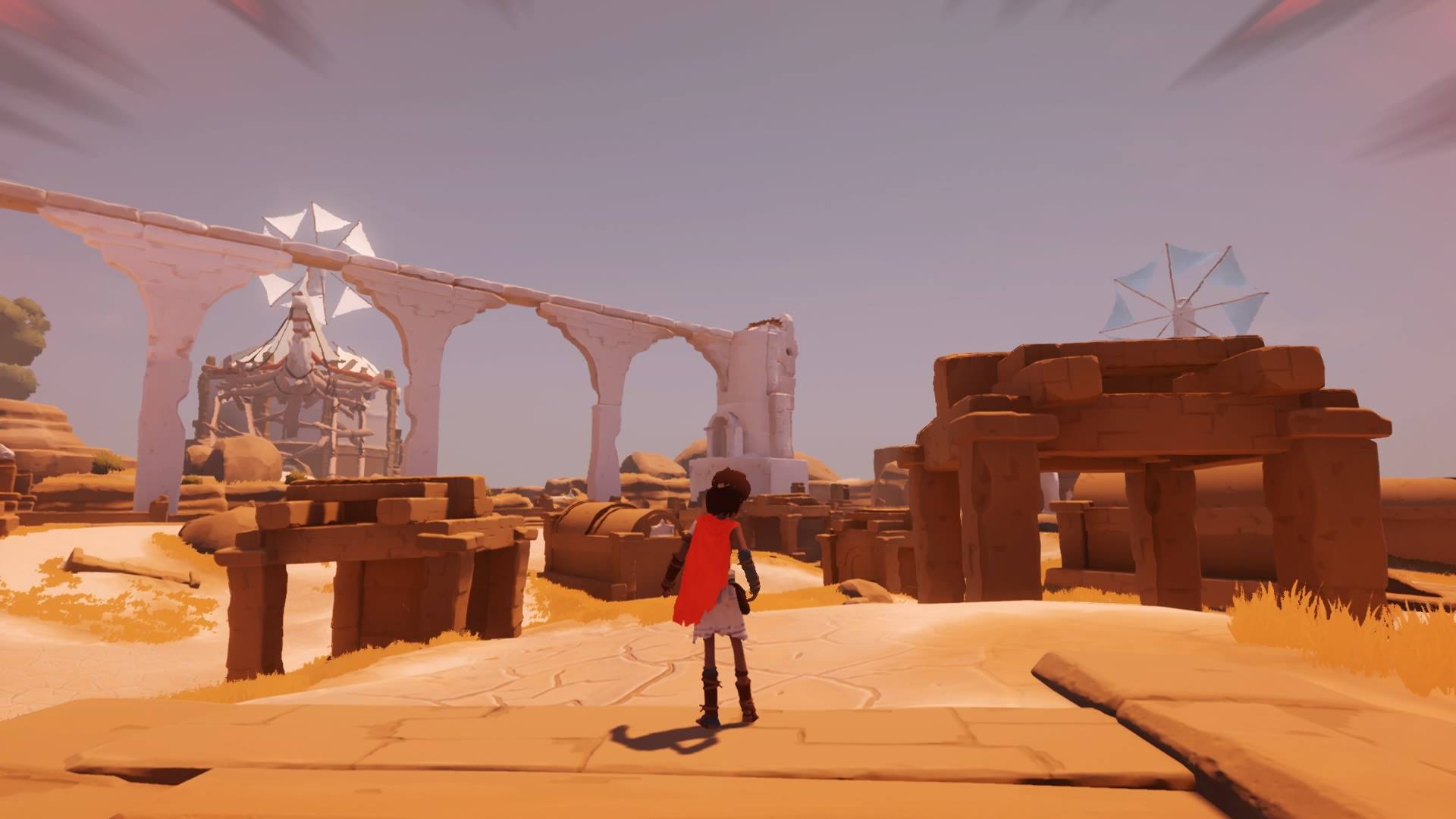 Storytelling through the whitespace is something that, when pulled off well, can create some of the more fascinatingly unique game settings out there. 2014’s Transistor comes to mind as a personal favorite example. There, it’s the articles on terminals, the background files of characters, and the structure of the city itself that inform the player just what it is that they’re trying to save. The problem with RiME‘s whitespace is that it doesn’t inform at all, really. It does the opposite.

Seeking a Friend at the End of the World


Although it’s riddled with its share of disappointment, there’s something really powerful about RiME that keeps me thinking about it. It drops mechanics too soon, but while they’re there, they’re imaginative and fun. It convolutes its own narrative with too many ideas, and an ill-fitting conclusion, but weaves relative intrigue at first. RiME is far from perfect, but the sheer amount of heart in it pushed me through as a player. That can only go so far, especially when the point of the game seems to change world by world. It doesn’t solve any of RiME‘s problems. But it does make it one of the games I will be thinking about the most through the rest of the year, even despite its many missteps. That’s worth something.

Full disclosure: This review is based on a copy of RiME given to Hey Poor Player by the Publisher. 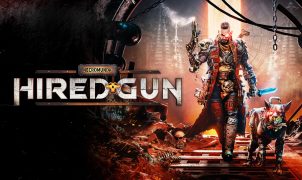