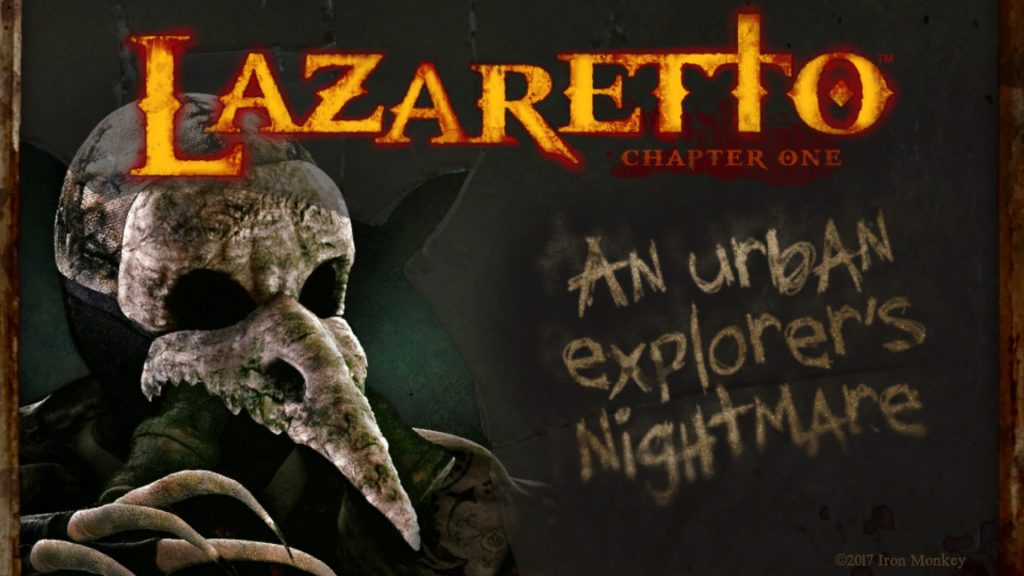 There is something about low-budget horror films that scare the hell out of me. I can’t quite put my finger on it, but maybe it’s the fact that I usually am not familiar with the director, so I’m not completely sure what to expect. Additionally, the camerawork tends to be a tad more rugged, giving a large chunk of low-budget films that documentary-style look most big budget films attempt to replicate. After playing through Lazaretto and hundreds of indie horror titles, I feel safe in saying that these types of games grant the similar feeling of fear I experience when watching a low-budget horror film, but with the creep factor turned up a notch due to the interactivity video games provide.

From the Ashes They Will Rise

Lazaretto is a new horror game developed by a small team out of Delaware called Iron Monkey. Being labeled as “The First State”, Delaware has a rich history of ghost stories that tend to revolve around much of the state’s celebrated past, giving Iron Monkey plenty of creepy source material to manufacture into their story. They’ve taken advantage of their hometown roots, and have created a look and feel that honestly gave me a sense of uneasiness during my exploration of Lazaretto Quarantine Island.

For those that do not know, a lazaretto is a quarantine station for maritime travelers with infectious diseases. These infected travelers would be held in these “hospitals” until they recovered or died. This practice started in 1423 in Venice, but lazarettos are now defunct with one of the final structures being shuttered in 1936. Plenty of these buildings still stand today, and with Philadelphia’s lazaretto building being only a stone’s throw from Delaware, you can get an idea where Iron Monkey got their influence. Lazarettos have a deep history. Given this, I’m surprised more game developers haven’t created hefty amounts of horrific stories around them. 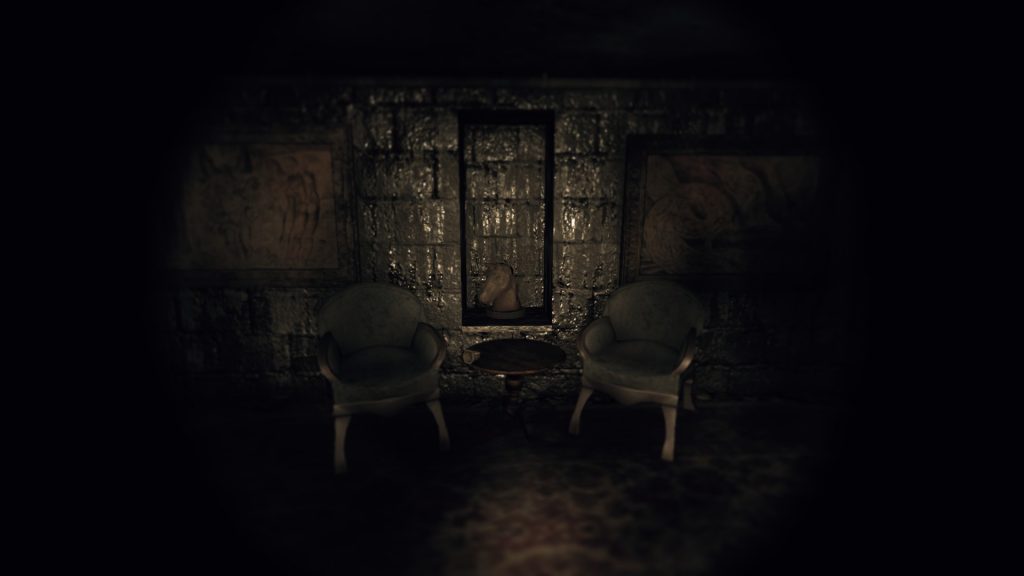 Looks like an inviting spot to take a load off.

Lazaretto’s story starts off pretty basic, and that’s not a bad thing. The main protagonist finds a key at his grandmother’s house that belongs to an entrance door of Lazaretto Quarantine Island. This Island coincidentally is where the protagonist’s grandfather used to work. This particular lazaretto was constructed in 1873 due to the yellow fever epidemic, but had to close its doors in 1922 due to “mass hysteria”. The main protagonist decides that he wants to investigate the lazaretto due to dreams that he he’s been having, and decides to take a boat to the island to settle his curiosity. Of course, this island holds a very mysterious history. Because of its sudden closing, there are several untouched notes and other items that can be pieced together to discover what the hell happened to cause this mass hysteria.

Let Fear Be Your Guide

The best way to describe Lazaretto’s gameplay is to compare it to Layers of Fear. Most of the game involves walking around creepy rooms and hallways while reading several notes placed throughout the environment. These notes range from numerous nurses communicating about the odd happenings around the lazaretto, to various other hospital inhabitants trying to decipher its mysteries. The player is given the ability to run and jump, but those are not needed throughout most of the game, the main focus here is piecing together the story to get an idea of what caused the hospital’s sudden closure. 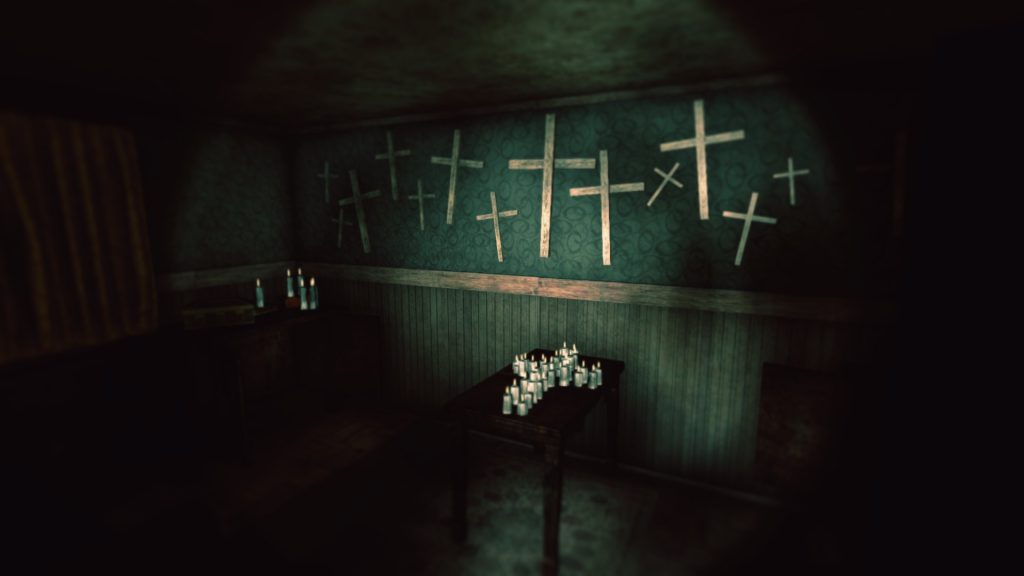 While the story does start you off in the main area of the lazaretto, you’ll be traversing several different locations throughout the game, eventually exploring tunnels under the building that lead to other parts of the island. This surprised me as I thought the whole campaign would take place in the lazaretto, but the deeper into the story I dug; I realized that this isn’t just a creepy ghost tale.

Lazaretto calls itself an urban exploration horror game.  You won’t be bombarded by hundreds of monstrous enemies, but you will witness several ghosts that haunt the old structure. These apparitions seem to show up at random, and constantly kept me on edge. One in particular really had me second guessing myself and wondering if what I was seeing was actually in the game. I don’t want to give too much away but the shadow ghost in the restricted area had me smiling while in constant fear of a jump scare. But the best part about it was that the jump scare never happened. That’s what I enjoyed about the game the most. The scares didn’t seem manufactured at all. Personally, I was scaring myself by expecting the lazy jump scare that I’ve grown accustomed to in horror games, but Lazaretto didn’t resort to that. That made me quite uneasy. The main story will take 1.5-2 hours to complete. The $12.99 price tag may seem hefty considering the short campaign, but Lazaretto begs to be played again to experience ghostly encounters that you may not have seen in your first playthrough.

Have you had all of your shots?

If you enjoy damp and depressing visuals Lazaretto is the game for you. The old building is rundown, decaying, and flat out disgusting. Walls are dripping with ooze and you’ll feel the need to get a tetanus shot after just a few moments of exploration. When you do eventually make it deeper into the story, the depressing atmosphere suddenly flips for a more otherworldly visual style. I can’t get into what you’ll be seeing as it’s an integral part of the story, but I was itching to get back to the decrepit hospital as I found that way more interesting.

The enemies and ghosts that you’ll run into during the game are your standard fare of floating transparent ghouls mixed in with a few creepy crawlies. Even though they didn’t look terribly scary, running into one was often followed by slight hesitation. One particular enemy that I thought was a brilliant idea was simply a floating white orb. I was fascinated by this thing since it didn’t really get any kind of explanation, but it would freak me out whenever I saw it.  The whole game consists of just a handful of ghostly encounters, but they’re all memorable.

The Joyful Screams of Children

A horror game is nothing without good sound design, and sound is Lazaretto’s strongest feature.   Ghost conversations can be heard, screams will accompany empty hallways, and the classic laughing child will even make an appearance. This may all sound cliché, but it’s done extremely well and in all the right places. The most chilling aspect of the sound is the way the music is presented. It’s not overbearing like numerous other horror titles. What is here is mostly subtle, best described as wind blowing through an abandoned building. Again, I kept expecting the sound to try to jump scare me, and it never really did. I felt uncomfortable since I was constantly guessing when it would happen.   The uneasiness throughout the gameplay has woven itself into the sound design and I enjoyed it immensely. 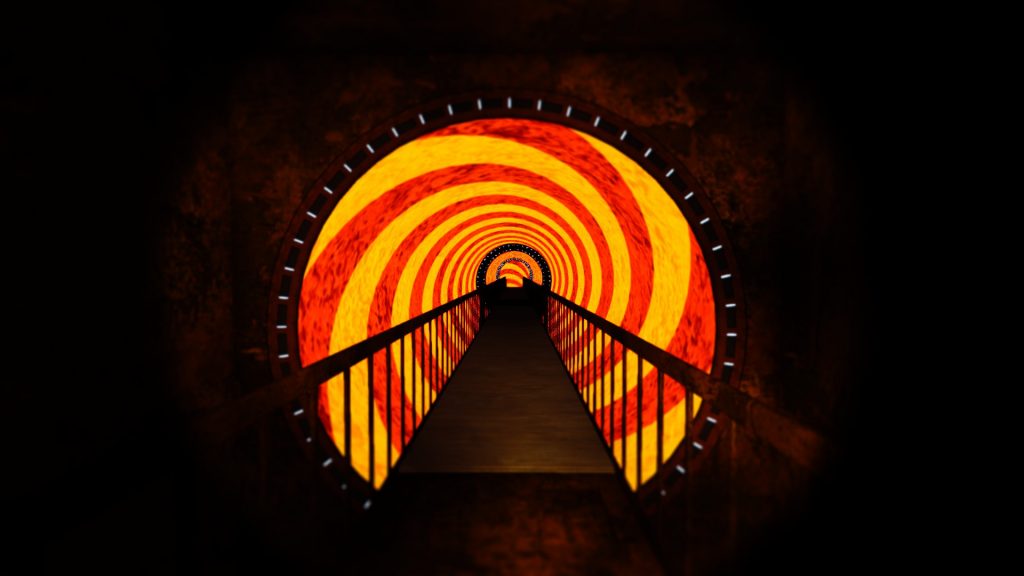 Although this looks pleasing, I couldn’t wait to get back to the grimy hospital.

An Apple a Day

Even though I enjoyed Lazaretto and the way it managed to creep me out, it does have notable faults. This is an incredibly small team creating this mind you; so don’t expect a well-oiled machine here. The game controls well enough, but I had issues; especially in the main hospital area of the game. In this area I had difficulty turning the character around. I would get some major lag, sometimes even enough for me to stop the player from moving to let the game catch up. Again, this was only in one area of the game and all the others were without issue, but this is worth noting considering that the hospital is one of the bigger sections of the game. Another problem I’d run into was when traveling in an area with a low ceiling, mainly the tunnels. If you jump in a low ceiling area the character will attempt to jump rapidly, even though his head is hitting the ceiling. This would give the game a buggy feel that took me out of the horror-like mindset that Lazaretto is out to accomplish.

A few other areas that could use improvement are enemy interaction and the flashlight mechanic. The flashlight will randomly start to flicker and I’m not really sure why. There aren’t any batteries in the game, and turning it off for a few seconds didn’t really seem to help. Some portions of the game wouldn’t even let me turn the flashlight off to test this, but other areas of the game I’d have no issue turning it off. The problem I had with the enemy may be more because I was playing the game an unorthodox way, but I found it frustrating to run past a particular monster whose touch resulted in an instant-kill. I was finally able to get past him after several attempts, but I didn’t get any satisfaction since luck ultimately was the reason for my success. Iron Monkey is very determined to iron out any bugs and improve on the gameplay, but as it stands these are issues that are currently in the game.

Understanding Your Own Death is Truly the End

Should you purchase Lazaretto? Well, if you enjoy Michael Bay-style summer popcorn flicks that involve highly technical special effects and explosions every couple of minutes, then no. If you’re more of an independent film buff that prefers story over substance, and don’t mind a few rough edges, I say go for it. The scares coupled with the excellent sound design provided me an experience that I plan on enjoying again in another playthrough. Considering that Lazaretto is being planned as a trilogy, I’m tremendously excited for what the franchise’s future holds.

Full disclosure: This review is based on a Steam review copy of Lazaretto given to HeyPoorPlayer by the publisher.

Honour The Great Horned Metal God   When Slain was released on PC back in March of this year it got a pretty bad rap. Several reviewers described it…