Adds a whole new meaning to “taking up space”… 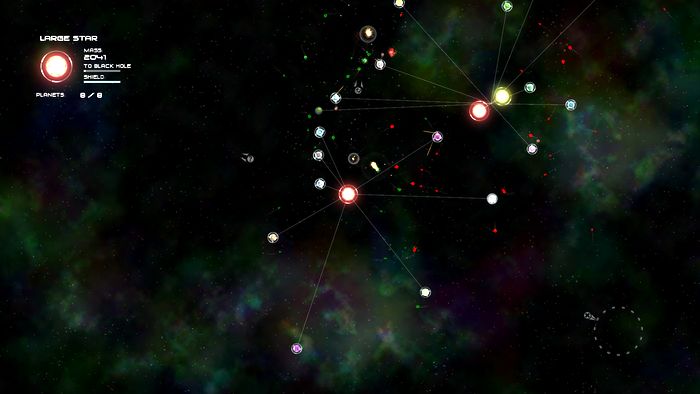 Solar 2 is an open-ended, sandbox game set in an infinite universe; there are no boundaries within the playing field. Think of it as something of an evolution game, but instead of controlling organisms, you control celestial objects with all the considerations of physics and momentum that such environments entail. Basically, it’s Osmos in space. And it’s all about being big. The biggest object in the universe, to put a fine point to it.

You begin your journey as a simple asteroid. A god-like being, known simply as The Entity, provides you with gameplay information and assorted objectives. He instructs you to collide with other asteroids in order to absorb their mass. Eventually, all the mass combined turns you into a small planet. Keep growing as a planet and soon enough you will be able to support life; life that grows, develops weapons and defenses, becomes space-faring, and earns experience for you by killing off the life from similarly-developed planets. Solar 2 involves a highly compressed passage of time, with millions of years passing by in a few seconds.

In a gameplay mechanic that defies cosmology, your planet will turn into a star once it’s able to accumulate enough mass. And it is here that you start to get presented with real choices. There are four levels of stars (small, medium, large and neutron), each with a different well of gravity and capacity for sustaining a solar system, if indeed you choose to develop one. If you decide on having planets, you can nurture them into hosting life and providing your system with offensive and defensive capabilities. Players may also choose to develop their planets into stars and create a binary star system or, if you’re really ambitious, a small star cluster. Alternatively, you can absorb your planets and hasten your development into an all-consuming singularity.

A star is born, and reborn, over and over again. 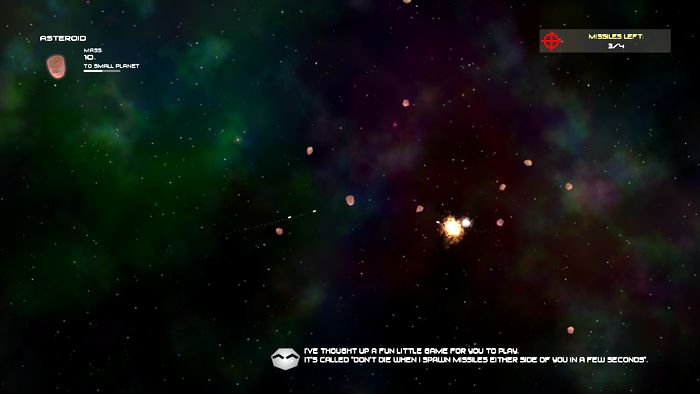 But the really fun part comes when your star gains enough mass to collapse into a black hole. You can now roam the universe with near-impunity, devouring all that stands in your path and avoiding larger black holes which become the sole objects that can destroy you. Eventually your black hole becomes so massive that you suck in the entire universe, triggering another Big Bang and respawning you once again as a lowly asteroid, thereby starting the process all over again.

This cycle from space debris to Big Crunch forms the backdrop for a variety of achievements and missions from The Entity. Whether it’s destroying an alien ship as an asteroid or turning your planet into a danger-attracting strobe-light, the game will give you plenty of reasons to come back and try something new; finish all the missions and you’ll be treated to a surprise.

Fundamental to Solar 2 is gravity. Mastery of this force is absolutely essential. From the development into a planet to your star’s collapse into a black hole, you can only grow by locking smaller objects into orbit around you. The game becomes increasingly passive as you attempt to get your satellite objects to grow while gradually losing the ability to influence them directly.

The gravity of the situation

You’ll find that you frequently fall victim to a misplaced object hurdling towards you or miscalculated momentum leading you into trouble. But the experience is never frustrating. On the contrary, it has that good old “just-one-more-try” quality that separates good games from mediocre ones. It’s all heightened by The Entity’s assorted tasks, which serve to add replayability once you’ve completed the journey from space debris to black hole a few times.

Supplementing the experience is an appropriate but ultimately forgettable soundtrack of sweet ambient music. Visually, the graphics are bright and clean and work well, although they remain unspectacular. Yes, I know it’s space, but it gets boring seeing the same background repeat itself over and over. Still, there’s just something very pretty and artistic about the formations of solar systems and the stars and planets that remain locked to them. Simple yet satisfying indeed.

Despite lacking some polish, Solar 2 is interesting, ambitious, and genuinely fun to play. It has the odd fault, but the laid-back nature will always have it earning your forgiveness. If you enjoyed Osmos all those years ago and would like something different with the “grow bigger” mechanic, Solar 2 is the game for you. It’s part space sim, part physics sandbox, and all-around easy-going enjoyment. Head on over to its official Steam page over here to snag a copy and get managing a universe of your very own.

Full disclosure: this review is based on a Steam retail key for Solar 2 purchased by the reviewer.