A Poor Man’s The Witness 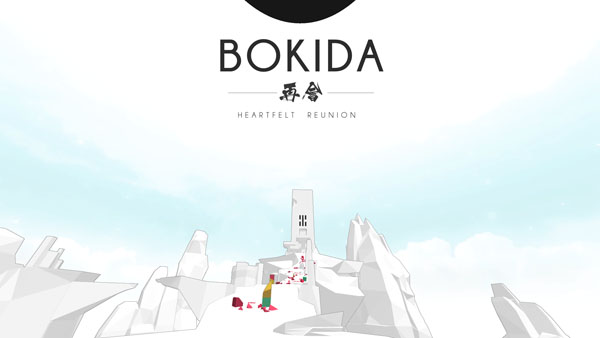 Light and Dark, once separated, now desire to reunite once more. In Rice Cooker Republic’s first game, Bokida: Heartfelt Reunion, the player takes up the mantle of The Messenger. At the behest of a disembodied feminine voice at the game’s start, you are told to reunite her with her love. From there the adventure at large opens up for the player in a minimalist environment that draws the eye without overwhelming it. Discover varied patches of landscape that offer puzzles as well as hidden items so as to complete your goal of reuniting Light with Dark.

At its heart Bokida: Heartfelt Reunion is an open world puzzle game with a scant few platforming elements. Those that play it may find it very similar to The Witness from early last year. Thankfully, Bokida finds itself to be not nearly as complicated as the aforementioned title. In fact, one might hesitate to call this a puzzle game given that the solutions aren’t exactly difficult to come by. Hints are placed throughout the environment by way of what look to be headstones. Hovering over the symbols reveals Taoist like messages that inform The Messenger with tidbits of the planet’s history. Granted, these morsels of intel are vague at best, and while they don’t add much to the existing narrative there is an achievement for finding half of them, and all of them.

The first few minutes of the game subject the player to a tutorial that crops up on occasion throughout the remainder of play. guiding the player into new mechanics opened up via activated monoliths (more on these later). Essentially, The Messenger has the ability to utilize four core mechanics throughout the game, plus whatever they find along the way. These are Build, Cut, Break, and Clean and are used through the pressing of buttons one through four.

Build it Up, Break it Down 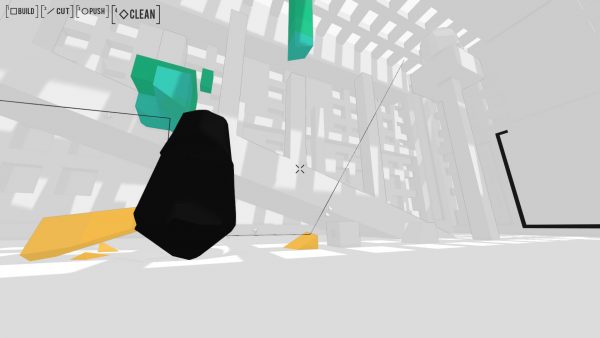 Clean up after yourself!

Build is the most common tool you’ll be using through the course of the game, if for no other reason than to gain access to out of reach places. This works similar to Minecraft in that the player manifests blocks that can be climbed on. Unlike Minecraft, however, building does not require resources. The player can build at their leisure and never have to stop.

It goes without say that the other three mechanics work in pretty much the same way. Usually, the only things that can be cut, broken, or cleaned are the very blocks that the player builds. There are occasions where the natural environment of Bokida: Heartfelt Reunion must be manipulated in order to solve puzzles though. For example, one puzzle requires the player to cut trees so that they regrow until the branches can access monuments and inject the inner powers of the planet into a nearby monolith.

These monoliths are at the heart of every puzzle. The main goal is to complete these so that the dark essence of the planet fills them and then beams their light (or absence there of) up into the dark planet hovering over the player’s head. This causes the planet to grow. Or, in all likelihood, is acting as a gravitational pull to bring it closer.

There are multiple monoliths to be found across the world of Bokida: Heartfelt Reunion, but doing so is not required to complete the game. Only a handful need to be activated before reaching the chapter entitled Epilogue.

The End Is Only the Beginning 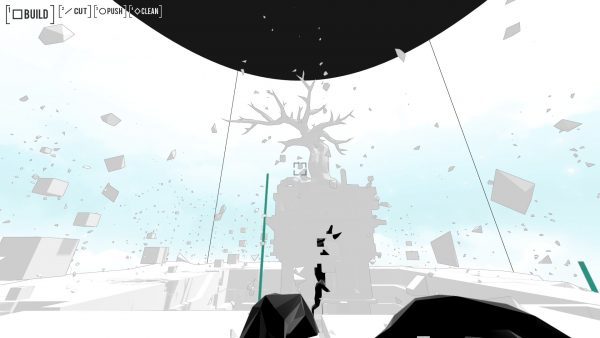 Exactly how sure are we that this isn’t a black hole?

The final chapter is probably the vaguest and most frustrating part of Bokida: Heartfelt Reunion if for no other reason than it’s unclear what the player is supposed to do during this portion of the game.

Without offering spoilers it’s important to say that the game actually does give you a pathway to the conclusion, but given how little information is obtained throughout the game itself it’s potentially easy to overlook. That being said, the issue can be rectified so long as patience is applied through the game.

Bokida: Heartfelt Reunion was a strange but not wholly unappreciated experience for me. The Taoist themes that reside, however vaguely, within the gameplay elements make for an interesting and relaxing experience. A player can get lost in exploration, even despite the minimalism of the surrounding world, and appreciate the environment for what it is.

However, moving around can be difficult at times as the motion controls get a little sluggish, especially when the player is flying (or “boosting”) themselves around the world.

On top of that, for only a few hours of gameplay, Bokida: Heartfelt Reunion asks a rather steep price. While the game offers replay-ability, there are better, more challenging games that offer more than what this title does. Not only that, but an extra ten dollars is demanded if the player wants the game soundtrack along with it which seems bold of the developers.

For all of this, I find it hard to recommend Bokida: Heartfelt Reunion at the standard price. However, in the event that the price is cut, or it goes on sale, I would without hesitation say that this would be a nice title to add to a library if you enjoy a game that is undemanding on time and abilities.

Full disclosure: This review is based on a PC review copy of Bokida: Heartfelt Reunion given to HeyPoorPlayer by the publisher.