On a quest to defeat debt!

It has been a while since I’ve played a game that was intentionally funny, and not just ironically funny. Humour is subjective and, in my opinion, insanely hard to pull of in video games. Regalia: Of Men and Monarchs is a surprising little gem that not only succeeds in being funny, but also in being a well-made rpg experience. There is no shortage of content, difficult gameplay, and jokes in this Kickstarter-funded title. So let’s dive into a sea of never ending debt – that is the actual plot of the game.

As of late, I’ve been reviewing games where your father has died and you are left with some sort legacy to run, and Regalia is no exception. Kay’s father has recently passed away, and on his deathbed reveals to him and his sisters that they are heirs to a kingdom. With this knowledge they go on a long journey to see the Kingdom that their father tells them off, and see the legacy of their ancestors. When they arrive to the location explained by their father, they find an abandoned castle and village destroyed by the sands of time; damn. It turns out that the castle and kingdom have been neglected by the later rulers, and the place has pretty much become a dump. After a series of events leading Kay to drink the ashes of one of his ancestors (gross I know), he is given a mission to bring the kingdom back to its former glory, which he wholeheartedly declines to do. That is, until debt collectors come and decide to take his former homestead until he can pay for the debt wrought by his ancestors. So now Kay and company try to pay off an insurmountable amount of debt all in the name in of glory, and, most importantly, not to go to jail. 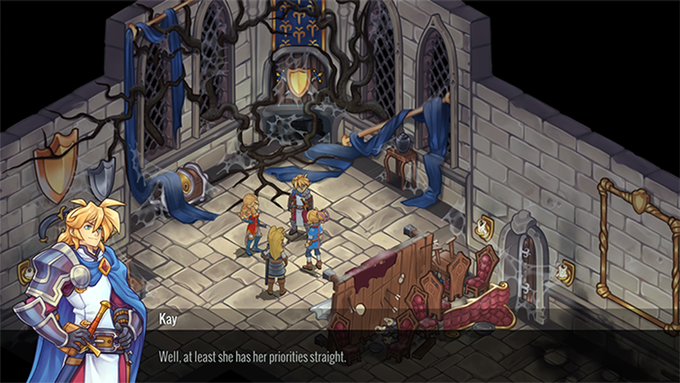 So the driving force of the game doesn’t sound heroic or epic, but I absolutely love it, mostly because it is delivered with humour and great voice acting. The game doesn’t it take itself too seriously most of the time, and it does so with grace. The writing and execution in this title are very well done most of the time, making all its snark more appealing than annoying. There are times when the game is joking around maybe “too” much, but it does buckle down and get emotional at times. Even the hero Kay isn’t a goody two shoes protagonist. He’s lazy, and feels like he isn’t suited for the responsibility of being a Lord. He slowly grows into the role rather than being a super OP, good at everything protag.

The characters feel like genuine people rather than RPG stereotypes, and I respect it. Each character is individually motivated, and the reasons for helping or joining Kay’s party feel more organic than other games. All helped by some solid voice acting and good jokes. So yes, the plot and driving forces of the game are silly at the start, but the characters are very endearing. The jokes hit more often than miss, and the overall development of the plot and characters is very solid. Sidenote: I love the characters, and there is no shortage of waifus.

So after realizing you are left with crippling debt caused by the fault of your predecessors and, everyone blames you for everything (much like being a millennial), the game opens up and you have a myriad of gameplay mechanics to balance. The game works on a calendar system, where actions you do in-game take time. You are given tasks and objectives to meet during every time cycle, which counts as a story chapter. So whether you finish a chapter is based whether you can complete your given objective within the game’s time, while balancing things that you as a player would want to explore and do. This is something that must be praised. The way Regalia balances all its gameplay styles is done very well. There are town managment mechanics, combat, diplomacy, and other gameplay quirks. They all have a surprising amount of depth, while still being accessible and easy to understand. The other elements also don’t conflict with each other and, at best, compliment each other. 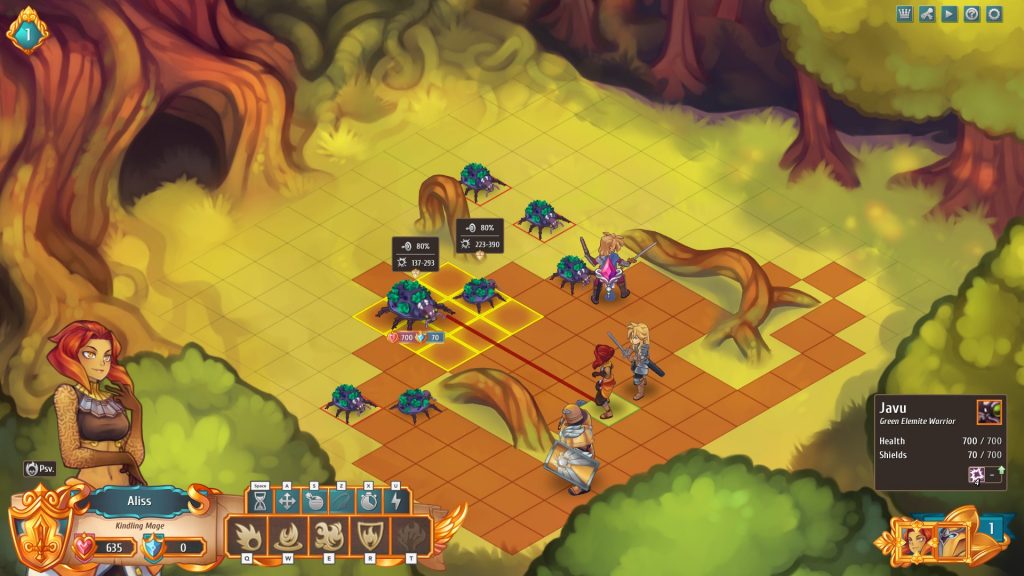 So at the heart of the game is combat. The combat is very similar to another game I love very much, Final Fantasy Tactics. As you leave the hub location, you are allowed to explore a beautiful world map with area and dungeon locations. Each location on the map has a series of quests, dialogue, and combat missions. After clearing these conditions you clear the map and get rewards. Combat takes place on a grid, and you set the formation of your characters at the start of every battle. After setting formation, you engage with enemies, with the order of characters based on initiative. The game allows your characters to move and do actions in any order you want; bless. So you can choose to move and do a skill, and then if you have any movement points left can choose to retreat. You can also just start with a skill then move, this is awesome. It is such a small thing, but it adds to the strategy, as well as mitigating bullshit combat scenarios where a strict order of actions could’ve been more hindering than not.

You can only enter combat with a set amount of characters, with each character having their own strengths and weaknesses. Party composition is important for certain scenarios. The victory conditions for each combat encounter is different as well, ranging from killing all enemies to lasting for a certain amount of turns, or killing a boss. There are also side objectives that give you bonus exp and loot if accomplished.

The meat of combat uses character placement in combination with skills, much like Fire Emblem and Final Fantasy Tactics. The game is pretty varied in its character skills and enemy types. Combat at late game is fun, if not extremely challenging. This game does not pull any punches on the default difficulty, and will test your wits. Using each character’s attributes and specialties is key to success, as is keeping in mind terrain and line of sight. However, enemies will not just let you beat their face in. The AI is extremely smart. They will use positioning and their strong attributes to ruin your chances at victory. Knowing enemies and learning from previous encounters is all but imperative to succeed. 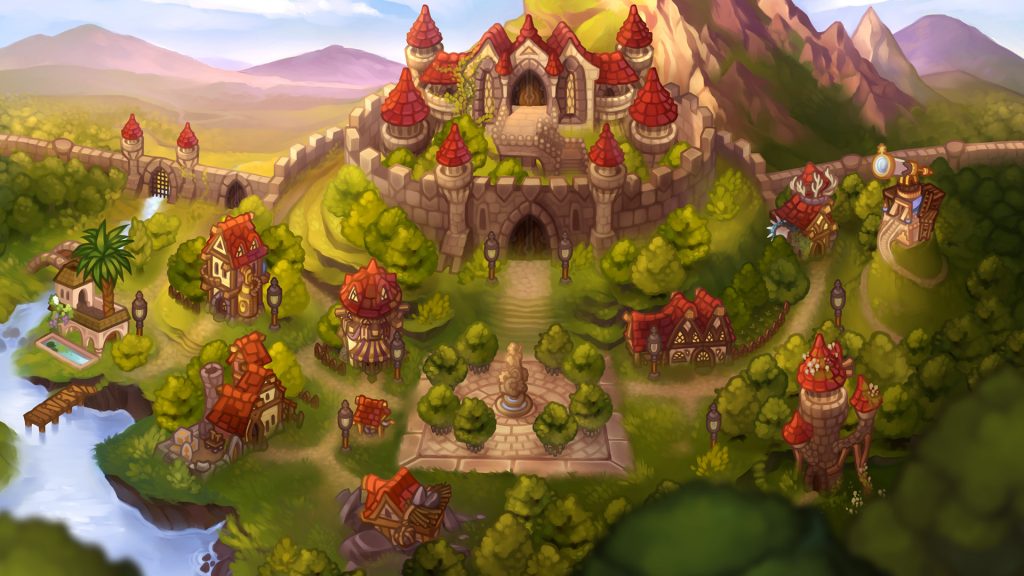 Another aspect that I feel was well done was the Kingdom management system. After going on your wacky violence adventures, you get loot that can be used to further upgrade the buildings in your village. The respective buildings in your village all have different functions, and NPCs you can build relationships with. These help out tremendously to advance the story, craft better items,and unlock characters. It isn’t incredibly hard to do at lower levels, and how you advance your village is completely up to you, so there is room for strategy. The castle and its surrounding locations are used as your hub, in which you can do things like conduct diplomacy, craft, and buy items. The reason I find the kingdom simulation enjoyable is because a lot of RPGs put arbitrary base management systems without understanding how it will affect the game. I will say that Regalia manages to make the castle management useful, but not broken, working alongside the other gameplay elements without holding them back.

So let’s talk about soundtrack and visuals. For an indie title of this budget, the game looks and sounds great. The game has a very cartoony style that reminds me a lot of games like Dofus and Wakfu. This style, in combination with the amount of gorgeous art makes for a game that oozes with visual charm. The maps, UI, enemies, and especially the characters look splendid. The color palette is bright, really coinciding with the game’s humor-filled tone. The character models in-game are also very well and simplistic. While not the most flashy models, they represent the character art very well. The soundtrack is an extremely good listen, ranging from typical RPG affairs to more heavy metal guitar riffs and 80s synths. The funny thing is that, despite the ever changing genres in the soundtrack, it all fits the game’s sensibilities. This is all topped with some of the best voice acting I’ve heard this year. The whole game isn’t voice acted, but when it is there it is quite a treat to hear these characters and their personalities shine through.

Regalia: Of Men And Monarchs is funny, gorgeous, and challenging as hell. The game is a breath of fresh air in the RPG genre, as well as a solid entry into the tactical grid-based RPG genre. It’s not perfect, but it does everything it tries to do with finesse and charm, and there is no shortage of things to do. The humour takes the game up a notch, and I am greatly impressed with how well-made the game is on a technical level, given the budget the developers worked with. Overall, if you want a good laugh, or something to to spend a solid 30+ hours on, this game might be for you. Just be prepared to reset a lot if you don’t play on the easiest difficulty.

Full disclosure: This review is based on a PC-Steam review copy of Regalia: Of Men And Monarchs given to HeyPoorPlayer by the publisher.