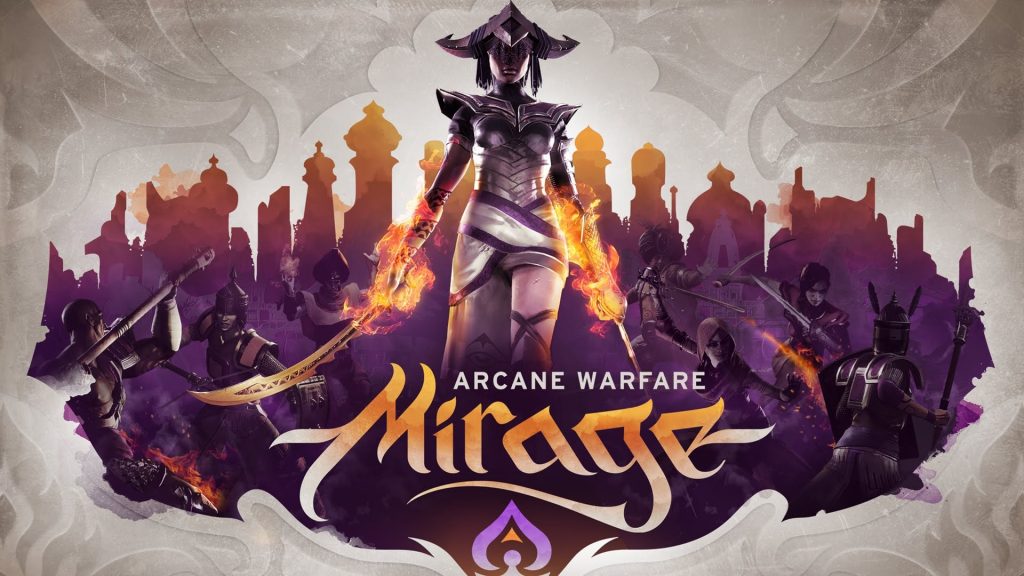 Last month, I got the chance to play the closed beta for Mirage: Arcane Warfare, and I had nothing but good things to say. I said then that “While the game’s still pretty rough around the edges (such is the nature of beta content), I think this could easily turn out to be the coolest competitive multiplayer experience of the year.”

Well, I’ll stand by that claim – Mirage: Arcane Warfare is indeed an excellent game, a truly unique competitive multiplayer experience that anyone who enjoys the genre owes it to themselves to try. Unfortunately, those edges are still pretty rough, and for many readers it likely won’t be worth that $30 price point.

The Prince Who Fell In Love With The Picture 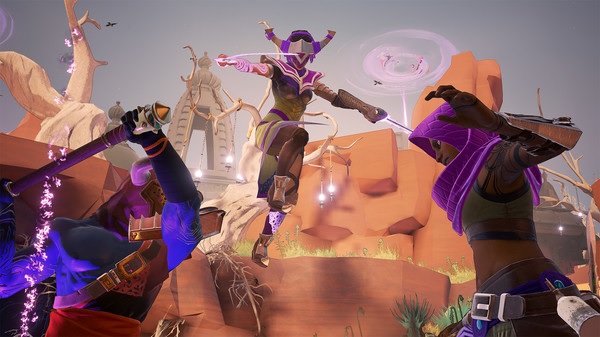 The Vypress is the fastest class in the game, and as a result, probably my favorite.

So. Mirage. It’s still a brilliantly-animated, jaw-droppingly beautiful game set in a brightly-colored version of Arabia complete with elegant palaces and inexplicable giant crystals. There’s more maps than there were in the beta, and now the game doesn’t crash every 30 minutes, which I thought was a nice little addition.

But most importantly, the game’s combat is still absolutely top-notch. If you’ve played the beta or you’re a fan of Chivalry you’re already familiar with the basic concept, but for the uninitiated: Mirage’s combat involves the use of several different basic attacks, as well as dodging, parrying, and six class-specific abilities, three of which can be equipped at a time. Everything can be countered, and in most cases, the counters are easier to pull off than the actual attacks, making Mirage a game of careful timing and misdirection. Unlike so many other competitive shooters (calling Mirage a “shooter” when it has no guns feels disingenuous, but heck if I know a better term for it) you can’t just pick a powerful ability and spam it. Sure, the Alchemancer has a suite of powerful nukes, but they’re slow, and every other character can parry them back at the caster, so the real strategy is in catching your opponent off guard. The result is a game that’s very challenging (and each of the classes are distinct enough to come with steep learning curves) but also very rewarding once you finally land that perfect hit. 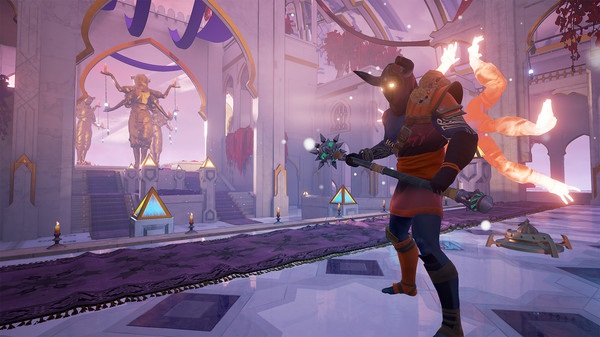 I think this is my favorite map in the game, if only beacuse of the aesthetics.

Of course, Mirage’s biggest and best addition to Chivalry’s gameplay is the much-touted inclusion of ranged magical abilities. In the hands of a lesser developer, adding ranged attacks to a melee-focused combat system would absolutely destroy the balance that’s so crucial to this kind of competitive game. Instead, by making ranged abilities slow and easy to parry, they become part of the delicate dance of striking, blocking, and dodging. This feels like the natural evolution of Chivalry’s fairly barebones gameplay, even if adding to the original game’s steep learning curve might alienate new players.

One of the best things about Mirage, especially when compared to Chivalry, is that the new abilities mean that any skilled player can fight on their own – even if you’re stuck with a team full of crap players (like me) you’re tough enough that you won’t get insta-killed walking out of spawn. The emphasis on individual power naturally means that there’s less teamplay, but…well, we’ll get to that in a moment. The important thing is that a match no longer automatically goes to whatever team has the better archers, and if you know what you’re doing it’s actually possible to win in a 1v2 or 1v3 situation so long as you don’t get backed into a corner and can keep everyone at sword’s length. 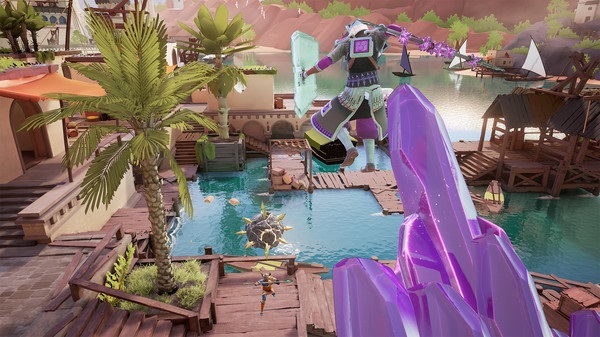 I’d like to tell you how some of the new objective modes work – I quite enjoyed playing Mirage’s take on Payload in the beta. Unfortunately, at time of writing Mirage is suffering from a serious lack of players (the servers peaked at an all-time high of 190 online) and those players only want to play Deathmatch and Arena (which is Deathmatch with permadeath.) Although more than 20,000 beta keys went out, most of them ended up being resold on secondary sites, and the only people who played were members of the famously salty diehard Chivalry fandom who declared that the game was terrible because it was different. The result? No players.

And while it’s hard to blame Torn Banner Studios for that fact, there’s no denying that it makes the game a lot less fun to play. It means that, effectively, Mirage only has two game modes and a handful of maps. Plus, particularly for our readers outside of the US, the lack of open servers means that you’re probably going to have to join one that has bad ping. So while I had no technical issues with the game itself, I still experienced a lot of lag simply because there aren’t a lot of other hardcore gamers in Lincoln, Nebraska.

Also: I suspect more people might have bought the game if it wasn’t asking for $30 for a fairly limited multiplayer experience. Torn Banner has promised to add more content in the future, but those promises are very nebulous at this time, and will almost certainly involve paying even more money. At the moment, the only incentive to keep playing are some pitifully pointless cosmetics. So unless you really love Deathmatch, this isn’t likely to have the sort of longevity enjoyed by, say, Team Fortress 2. (Then again, people are still playing Overwatch, and Mirage has a lot more maps and modes even at launch than that game does now.) 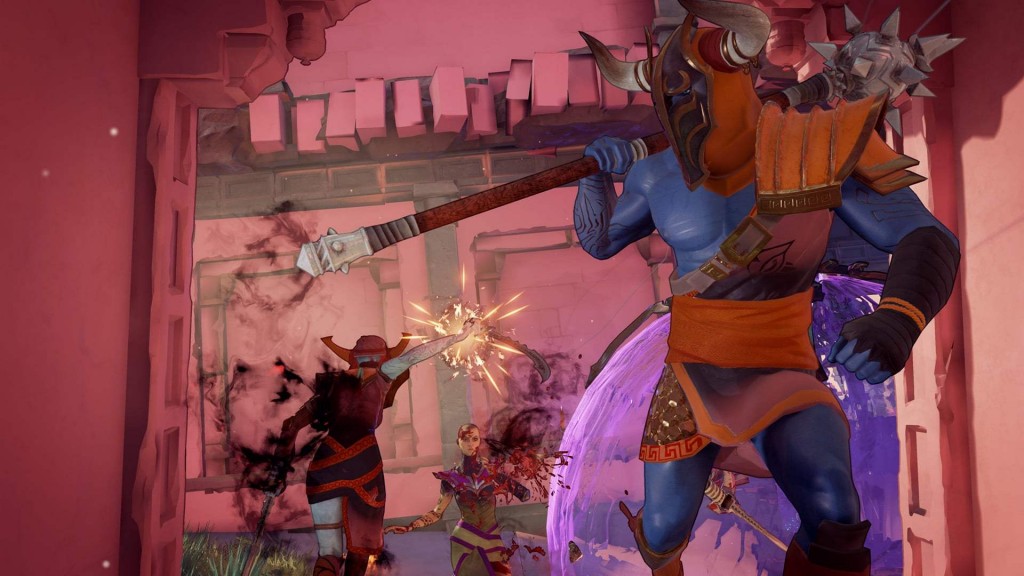 Sure, I. Make all of the subheadings titles from “1001 Arabian Nights.” People will TOTALLY get that reference.

If you’re a fan of high-skill competitive multiplayer games, and particularly if you were a fan of Chivalry, I think you owe it to yourself to try Mirage. It’s a brilliant, unique, and utterly beautiful game that I’m terrified will get buried by its lack of playerbase. I can tell you that I put 15 hours into the game for this review, and I’m still not tired of it – in fact, I’m excited to see what Torn Banner Studios does next (although I’m less excited to pay for it.)

On the other hand, how can you recommend a game that’s asking so much for so little? That all but guarantees that you’ll have problems with lag and whose best game modes are going untouched? I know these problems really aren’t the developer’s fault, but they’re still an integral part of the experience, and something you as a consumer need to be aware of before playing.

In the end, I think I’ll stick with my initial valuation. Mirage: Arcane Warfare is an excellent game that’s very rough around the edges. You’ll just have to decide for yourself whether the diamond is worth digging through the rough.

Full disclosure: This review is based on a review copy of Mirage: Arcane Warfare given to HeyPoorPlayer by the publisher.

Running in the ’90s     The ’90s were a magical time.  Technology in gaming was just starting the quantum leap forward from mostly 2D graphics to primarily 3D…