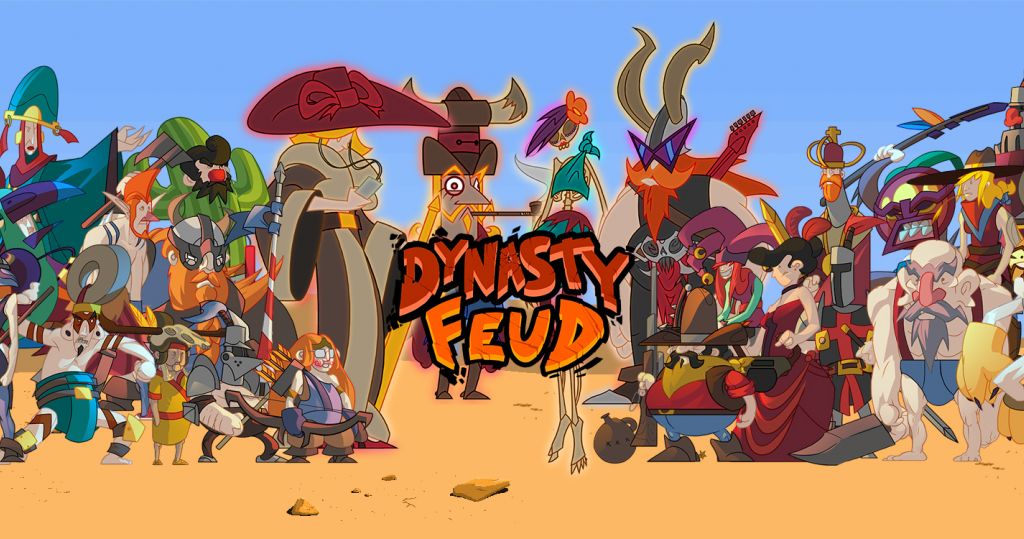 In case you haven’t noticed, the Smash-style brawler is making a comeback. Between this year’s critically-acclaimed Rivals of Aether and even the somewhat less shining example of Brawl Out, the genre seems to exist properly now. Here, now, comes Dynasty Feud, putting a unique twist on the newly-refurbished genre. I, for one, am fully ready to welcome the term “Smashlike” into our vernacular. Hey, it’s still not as silly as “Metroidvania.”

Dynasty Feud comes in, in the middle of this all-out fisticuffs match for Steam supremacy, and does something just a bit different. Namely, it brings the whole family along for the ride. Instead of taking a single character into the fight, this game gives you five, and tells you to go nuts. It’s not quite like the single-lead-two-assist setup of a Marvel Vs. Capcom game, either; each member of your team is set, depending on the family of your choice. If you’ve ever wondered after the old “Cowboys versus Ninjas” argument, this game takes the two and adds vikings, pirates (the computery kind), aliens, and a host of other fierce family trees to filet eac other on a roster of stages that fall apart as they play. The result has some vagueries in the lineage in need of working out, but that doesn’t stop the mayhem from being a whole family reunion of fun.

It seems developer Kaia Studios wasn’t setting out to reinvent the wheel when they created Dynasty Feud. The game’s uniqueness coes very much from the approach of “what if we took (A) and added (B)?” The (B) in question is the roster of five characters eac players selects when gearing up to fight. In the standard online and offline modes, players pick from one of a group of predetermined dynasties, each centered around a particular theme. There are 8 in all, ranging from the old west Cartwrongs to the collection of cavemen and dinosaurs known as the Uurg Aaarg.

There’s a fun and cartoonish alt-history theme going on with all of these guys that fits the bill perfectly. There are 8 families in all, which may sound like a low count to veterans of games with more vast rosters (hello, Smash, I didn’t even see you there). More along the lines of previously-mentioned Rivals of Aether, though, a smaller cast leads to more distinct variety between sets; especially when we’re looking at a whole quintet of characters.

Fun(demental understanding of fighting mechanics) for the Whole Family

So you pick your clan and go to it. Each dynasty has a sort of mascot character that appears as a floaty ghost as the game counts down to the match’s start, and it’s these overlord patrons you’ll be seeing whenever a member of your crew kicks the bucket. While you’re in your spectral form, you can cycle freely through the members of your blood-crew. Each one is bound by the same pretty simply fighting mechanics, but all operate slightly differently within them. 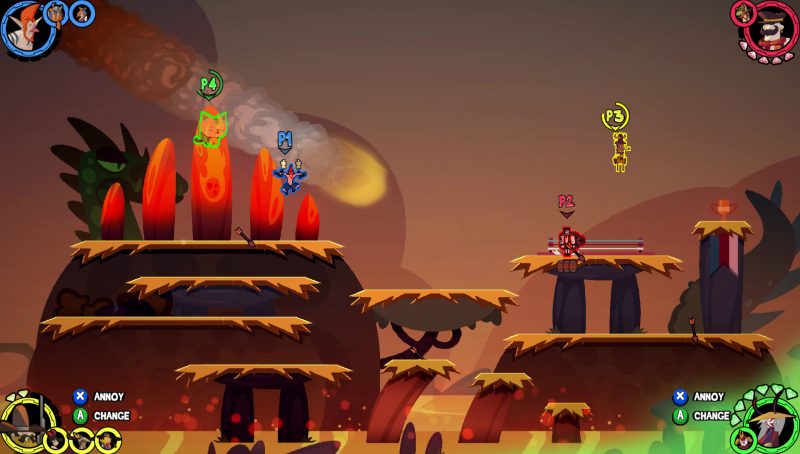 Basically, each character has a light and a heavy attack. For some, both will be melee. One might be a leaping forward slash, the other an upward arc. Another might have a throw-able spear that has to be retrieved after the toss, or a quiver of arrows that behave the same. A few characters have good ol’ regular guns for their weapons. Some can simply be fired as an attack, while more SMG-type firearms can be charged up and let fly from a stationary position. Watch yourself, though; standing still is inviting trouble.

Most characters also have either a shield or a dodge roll, and it cannot eb stressed too far that you must remember which is which. If I was better at that, I would have won more matches. Each character has an ultimate attack associated with their clan. If you’re the clan of samurai and Bushido warriors, your patron saint is a giant Japanese Lucky Cat, who will toss around a devastating ball of yarn. The Norse Yingling dynasty’s ghost will send down a volley of lightning strikes.

The other huge difference between Dynasty Feud and others in its Smash-like ilk is the handling of damage counters. Namely, it does not have them. Everything is either a one-hit kill, or a half-killer that causes some knock-back or stumble. Players who hop into games like these and focus on endurance-centric characters, or those who get stronger as they ake more damage, might be saddened by this news, but hear me out. It makes the game better in every way. 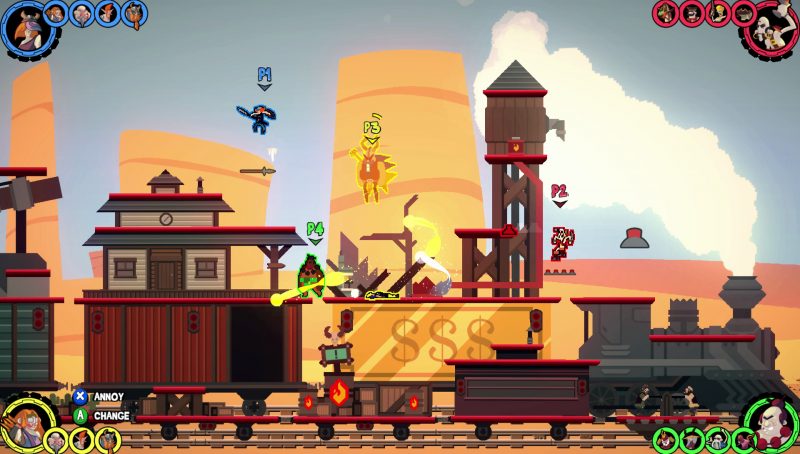 It’s actually the absolute best balance choice that could have been made. In Dynasty Feud, your five characters are, in themselves, your life bar. You have five chances, and that’s it. I was playing a few round with Hey Poor Player Cool Video Kid Nathaniel Terencio, and we observed that the flow of the game’s fights is a lot like Nidhogg. When you know it only takes one touch to kill you, you change the way you fight. The stage’s imaginative and wonderfully-crafted maps crumble as you play, adding a superimposed time limit that feels more out of Speedrunners.

And the flow works. It takes time to learn how each dynasty’s armada works. One is entirely melee-focused, but with amazing speed and agility to back it up. Another is based largely around blunt projectiles and close-range heavy damage. Each one’s group has a lot of variety, though, and once you’re able to remember who is who, they all become pieces in the world’s deadliest game of chess. There are a couple families with a character that seemed to not have any special traits or particular purpose at first, but eventually realized that, in a game like this, some teams needed a scapegoat. The teams with characters like these were often also the ones with the more noticeably powerful players. It’s all in the name of balance.

A bit of family tension

The big major drawback in Dynasty Feud as it stands right now is in the handling behind its fantastic fighting. When playing local, things ran fine, with two, three, or four players. When hopping online, however, it was saddening to see as a three- or four-player match would suffer from random instances of server lag. Some were momentary and excusable, sure. Others, though, would jag throughout games. It’s not an overload problem, either. The issue arose when I played with otehrs using review code before the game had launched. Even now, it can take a while to find someone to play against.

It’s also disappointing that certain odes aren’t yet playable online. When playing a local game, players can choose between a standard mode, a 2V2 team battle, and an all-star mode, where everyone can assemble their own custom five-character dynasty. For some reason, these modes are only available in local play. The only choice online players are given at the moment is whether to play in public or private servers. It would be one thing if online and offline play both had more modes to begin with, but restricting an already tight and small package of content to only one side of the way people play the game seems almost crazy these days. It’s an unfortunate oversight that keeps a really good fighter from getting even more…really…gooderer. Yeah.

Dynasty Feud is cool. It’s really cool. Jumping around and trying not to get hit by a guy with something resembling Cloud Strife’s sword, all while maneuvering and wall-jumping while trying to kill what appears to be a color-swapped Alphys from Undertale; yeah, I enjoyed myself. There’s great diversity in its cast of fighters, and the main idea it introduces to the “Smashspace” (screw it, I’m on a roll with these today) pulls through beautifully. There’s a learning curve, and not an easy one, either. Once you’ve mastered that, though, you’ve got a game that stands right up there with the best of the neo-king-of-the-hills out there. The servers could use some work, and it would be nice if all the modes could be played wherever, but what’s here is five whole generations of fun.

Full disclosure: This review is based on a copy of Dynasty Feud given to Hey Poor Player by the Publisher 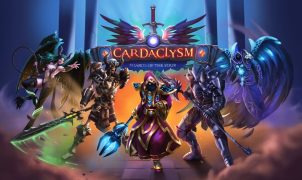 Apocalyptic Cardcaptors meets Yugi-Oh and Pokemon Hoo boy. You’ve really done it this time, haven’t you. Just because you’re a dark wizard, you thought you could mess with powerful…