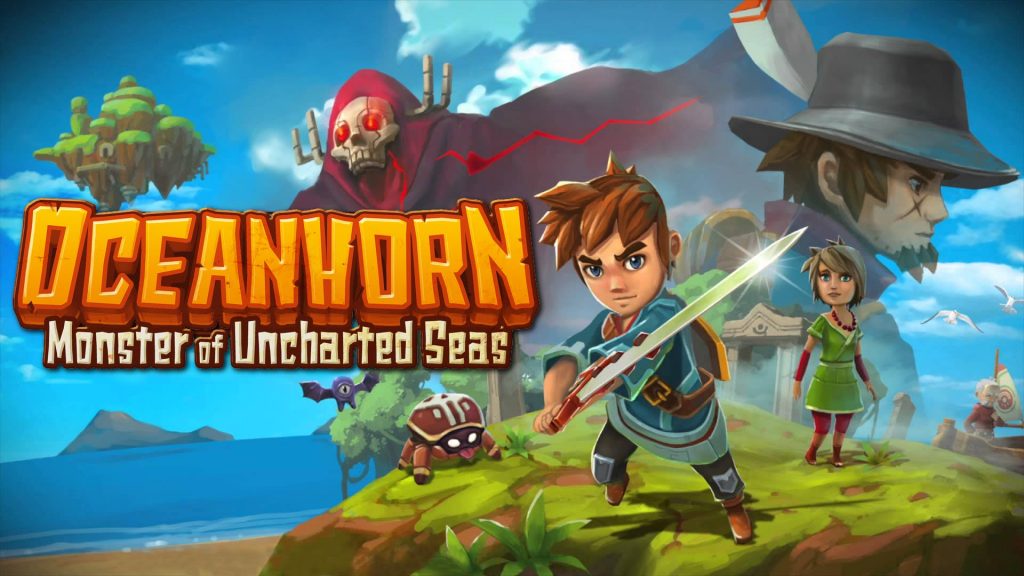 Oceanhorn: Monster of Uncharted Seas seems to have had a pretty nice run thus far. Initially releasing back in 2013, this Legend of Zelda-inspired adventure has successfully managed to do something that a lot of mobile games haven’t — release on things other than mobile. Over the past few years Oceanhorn has jumped from phones to PC and, even  to consoles. And now it’s finally making yet another journey… a journey back to the realm of handhelds. The Vita, in this case. Kind of weird route, but that’s fine. If it works, it works.

It isn’t hard to see why Oceanhorn has done as well as it has. It’s a nice, easy-to-digest LoZ-like with a surprisingly large amount of content. And, while I did find it to be a bit on the plain side overall, I’d be lying if I said that I didn’t enjoy the game for what it was worth.

Oceanhorn begins with the main character (who is never actually given a name by the way) fast asleep in his bed, while his father writes him a letter on his bedside table. The father explains that they are both bound by fate to battle a terrible living fortress known as Oceanhorn and that, despite it being the last thing that he wants, he knows that his son will one day have to face Oceanhorn. Knowing full and well that neither of them will be able to escape their destinies, the father sets off to fight Oceanhorn anyway — leaving behind both the note and a journal in hopes of helping his son when the time for his journey comes. 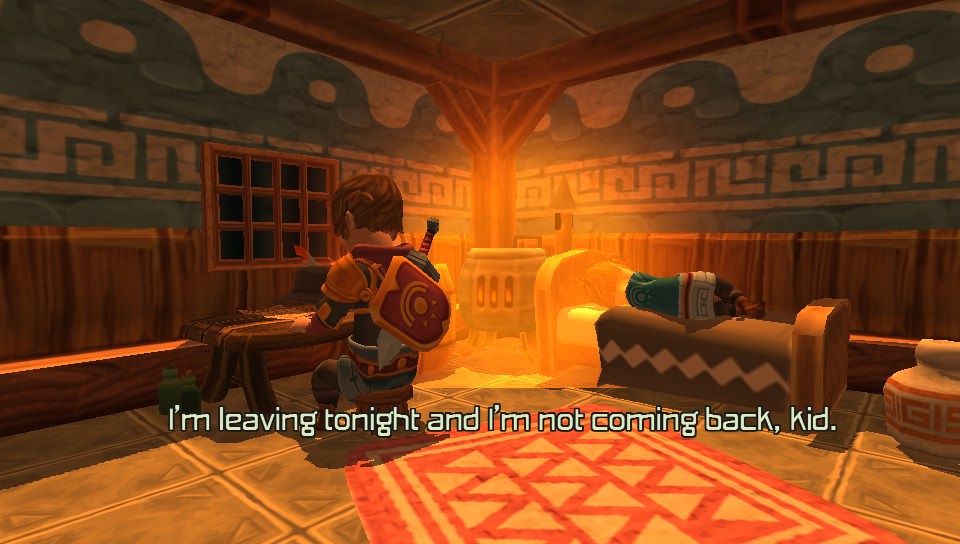 Well, at least he was nice enough to write you a letter…

I’ll be frank with you, the entire story is very “Zelda Lite”. You train with a hermit, explore the world, delve into dungeons in order to collect sacred objects, and make friends with a village girl who, despite not being able to adventure on her own, wants to help you in any way that she can. The game even has a few mystical races — one of which bears a striking resemblance to that of LoZ‘s Zoras. But do you know what? That’s all just fine. Oceanhorn is very honest and upfront about the fact that it is a tribute game. It isn’t trying to carve out a niche for itself. Rather, it’s taking elements from a beloved series, tweaking a few things, and turning it into something that’s both new and familiar at the same time. And that doesn’t just apply to the story!

While Oceanhorn is obviously based on the Legend of Zelda series, it without a doubt follows Wind Waker the closest. Your goal in is to collect the three Emblems  — sacred relics blessed with the power of the gods — scattered throughout Arcadia and, once you’ve done that, confront the scourge that is Oceanhorn. That’s easier said than done, however. Thanks to the doings of the evil wizard Mesmeroth and, of course, Oceanhorn itself, most of Arcadia is now underwater — and what isn’t underwater is in bad shape due to the curses that Mesmeroth has been throwing around. 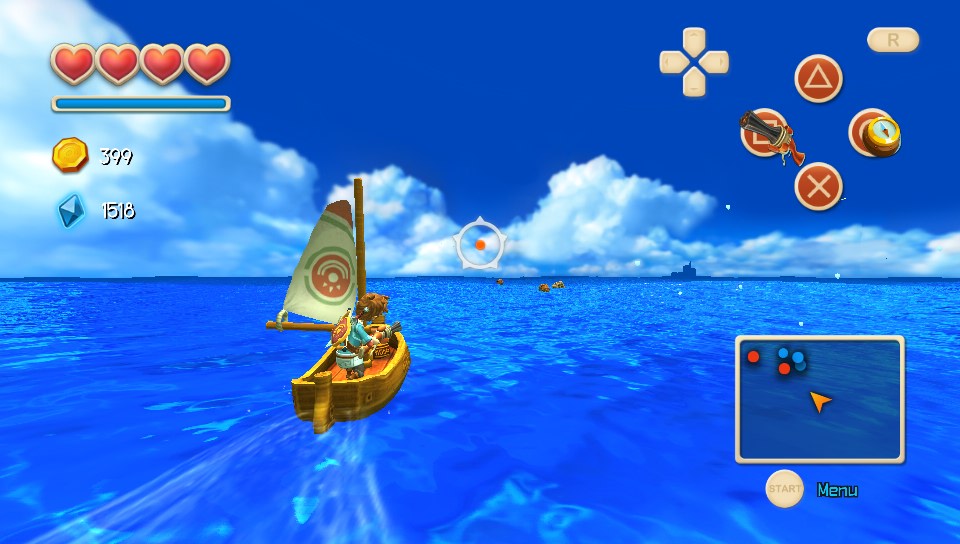 Sailing from island to island takes the form of a relatively peaceful rail shooter.

Gameplay is a bit of a mixed bag, albeit one that falls on the more positive side of things. To start things off, I feel as though Oceanhorn plays like it was meant to play. A bit basic, I know, but stick with me. When someone makes a game that emulates another, appearances aren’t the only thing to consider. It needs to play similarly to what it is paying homage to as well. Oceanhorn does a great job of setting things like controls, combat, and puzzle-solving to closely match how they are in LoZ games.

Oceanhorn also has a surprisingly decent number of places to explore, boasting at least a good 15 islands. There were plenty of secrets, too. I would venture to guess that a first-timer could tackle the entirety of the main story in roughly 7 – 10 hours, depending on how efficient they were. If you aim to collect everything however, you’re looking at least 15 hours. Considering that this game debuted in 2013 on mobile, that’s pretty darn good. 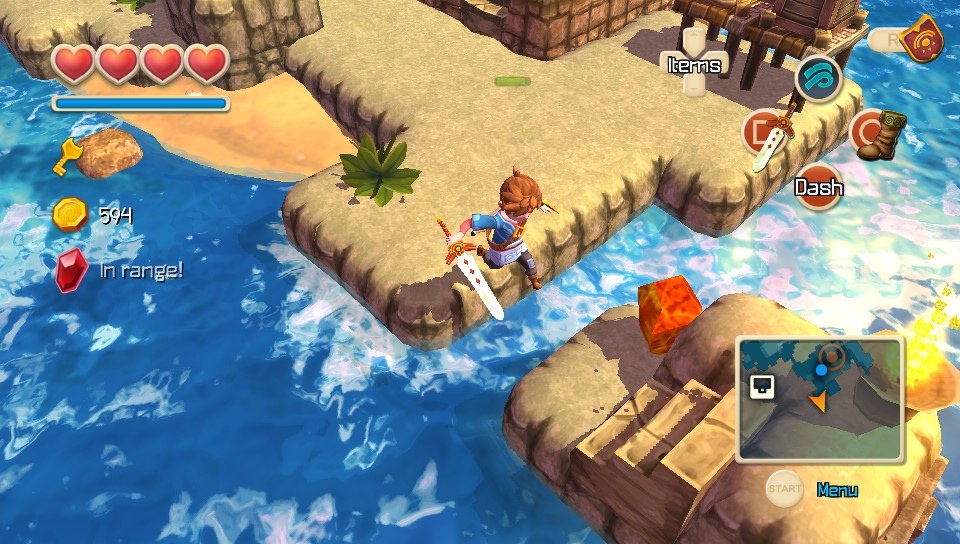 Each island holds plenty of secrets. Be sure to keep your eyes peeled!

Unfortunately, exploration was a lot of the same thing. From a story-based standpoint, I suppose that you could argue that this makes sense. Arcadia was once a single continent, and it doesn’t look to be a very large one at that, so lack of geographical variance is only natural. This is a game, though. While I can appreciate the creators trying to make Arcadia cohesive, that effort ultimately turned out to make its many different islands similar. I basically felt like I was wondering around in a series of small, monster-infested wastelands. I get that Oceanhorn is a smaller title, so it isn’t going to have all of the crazy landscapes that a Zelda title has, but even something as simple as changing the ground textures would have spiced things up. Sure the islands would have still played the same, but at least they would have appeared to be different.

The issue that I had with the islands in Oceanhorn wasn’t I didn’t have fun, because I did. It was that all of the islands felt the same. And, well, I kind of found myself running into that same problem when it came to the game’s big boys — the dungeons that you visit. Dungeons, like most things in this game, are modeled after those in The Legend of  Zelda. In contrast to the Wind Waker-esque island romp that is the overworld however, Oceanhorn‘s dungeons are akin to a mild, more linear version of those within A Link to the Past. 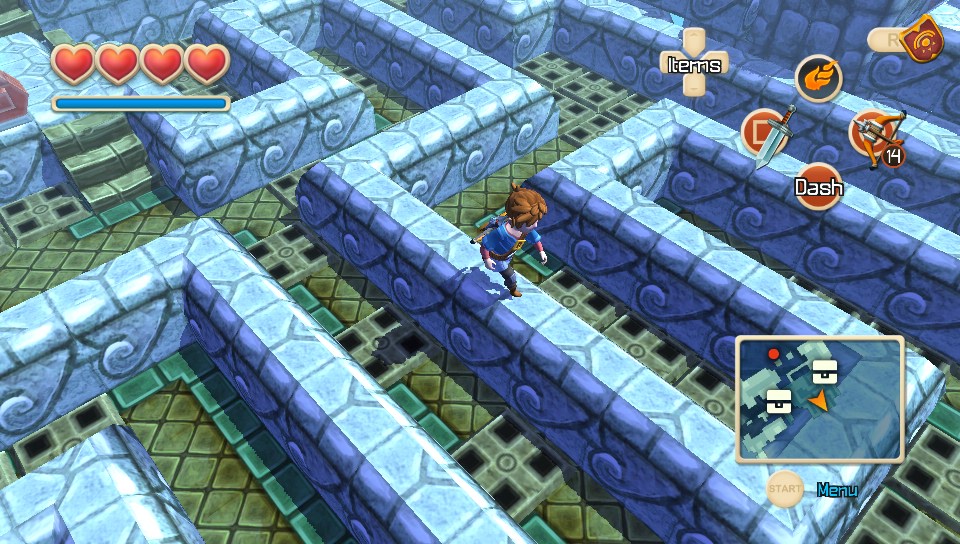 I could have used some more perilous areas like this one.

My problem is less with the dungeons’ groundwork and more with their execution. On the whole, they successfully emulate that “LoZ feel”. You solve puzzles, pick up a neat new item like a bow or a powered-up shield about halfway through, solve a few more puzzles, and fight the boss. Cornfox & Bros. definitely has that formula down pat. The problem I had was with how they played out. I like my puzzle-filled dungeons to stump me every once in a while. Don’t get me wrong, constantly getting walled by gimmicks is infuriating, but solving the occasional brain-bender or two has always been satisfying for me. I’m sure that it is for most people. That feeling just wasn’t there with Oceanhorn. Sure there puzzles, and sure they vary, but nothing ever really made me stop and think.

I also noticed a lack of creative loot. Arguably the best part of a dungeon is getting that oh-so-coveted tool that you’ll inevitably need down the road. Naturally, Oceanhorn followed that rule. There was a tool for every dungeon, and a dungeon for every tool. It was all so mundane, though. You had your bombs, your bow, and a few other things that I won’t spoil, but there wasn’t anything particularly exciting. To be fair, there was magic. Being able to cast spells is pretty neat. You rarely used your spells though, and collecting most of the magic was optional. In fact, there were honestly a few times when I forgot that I could use magic due to how infrequently I did use it. Because of that, I feel like any attempt to balance the boring out with the exciting fell flat. 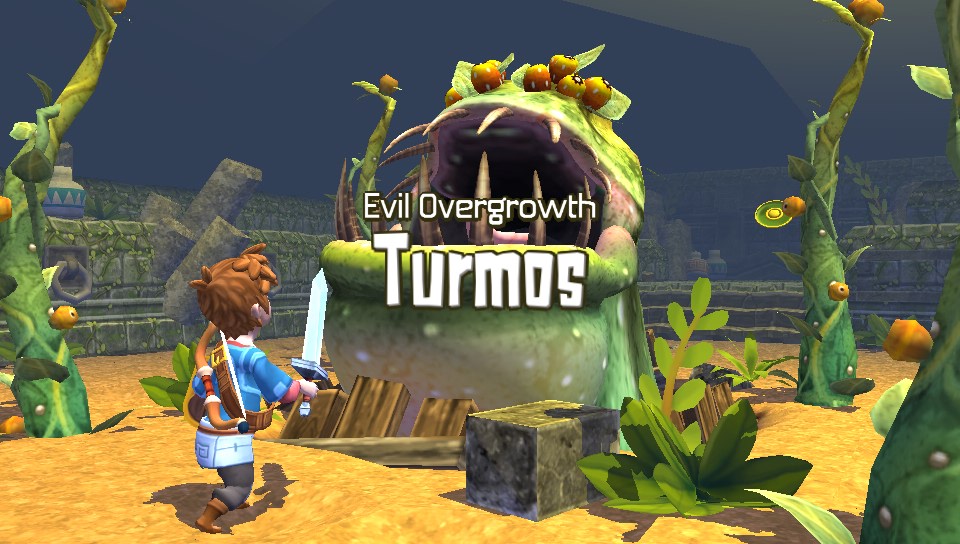 Boss battles spice up Oceanhorn’s dungeons quite a bit!

The bosses were pretty solid, though. For all of my nit-picking about islands and dungeons being similar, I can’t say the same thing about the boss battles. Every dungeon boss is its own unique beast, boasting quite a bit of variance from anything else in the game. Most of them even have defense gimmicks that players are required to disable before dishing out damage, turning them into the “puzzle bosses” that we all know and love. And yes, Dead Man’s Volley does make an appearance. You had better work on that timing!

Oceanhorn: Monster of Uncharted Seas is a perfect example of a game playing as advertised. It’s a fun, pocket-size adventure, and a nice tribute to The Legend of Zelda. Truth be told, Oceanhorn isn’t anything new. It doesn’t provide anything that we haven’t seen before. It also doesn’t falter in any area, however. Nothing about it is bad. In fact, I would say it’s a solid “good”— and there’s nothing wrong with that at all.


Full disclosure: This review is based on a copy of Oceanhorn: Monster of Uncharted Seas given to Hey Poor Player by the Publisher