Come on and slam, if you want to NBA Jam.

NBA Playgrounds is the spiritual successor to titles like NBA Jam and NBA Street. These games were a part of my childhood, even though I had never watched an entire basketball game (still haven’t, actually). I didn’t need to know anyone but Michael Jordan or Shaquille O’Neal to pick up the game and shoot some hoops with friends. NBA Street Vol. III put me in a fantasy I couldn’t fully comprehend. In its attempt to mimic reality, NBA Playgrounds loses some of the magic that made previous NBA games so appealing.

NBA Playgrounds features over 150 current and past players. It’s missing a few key players like Michael Jordan and Larry Bird, potentially reserved for down-the-line DLC packs. The only issue with the current roster is its meager attempt at balance. The most influential players of all time compete with the relatively unknown, but have similar total ratings. Legendary players have unique abilities that are supposed to give them an edge over the competition. However, these techniques are poorly explained and offer little to improve a player’s viability. 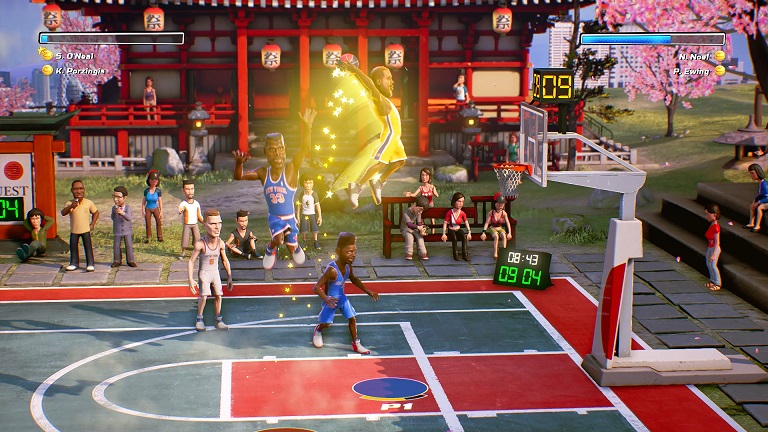 Timing is critical when aiming for the hoop. Unless you’ve nabbed a specific power-up, you must hold and release the shot button at a very specific time. The split-second pause at the peak of the player’s jump is the key moment to take the shot. Each player has a different timing to their shots based on their overall ratings, so it’s usually a good idea to stick to two main players and master their timing.

Getting a Perfect Shot rewards the team with an additional point. While it’s satisfying to nail the timing, bots will consistently get Perfect Shots even on the lowest difficulty. This means that they can easily outpace players that struggle to make them. Strong advantages throughout the game can easily be lost as opponents rack up four points back-to-back with Perfect Shots. 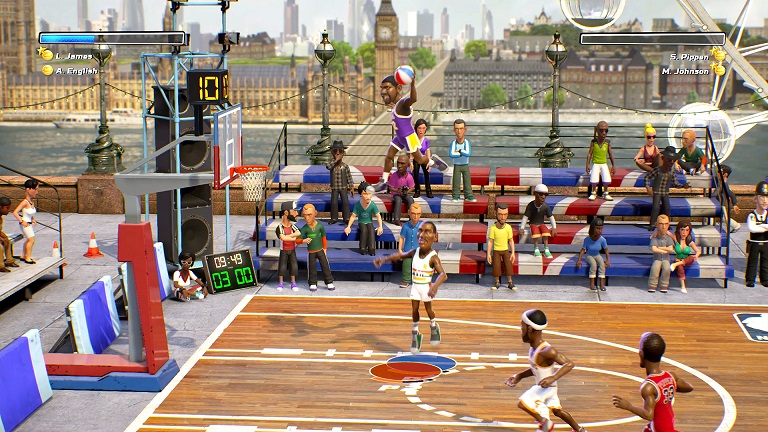 A meter at the top of the screen fills up as the player performs dunks, alley-oops, and steals. When filled, the Lottery Pick grants players powerful abilities for a short time. One power-up gives you an unblockable shot, while another decreases the shot clock timer to a measly twelve seconds. It’s important to play around these abilities because they can turn a game around or turn a slight disadvantage into an impassable lead. Relying on your own Lottery Pick meter can be a risky gamble because NBA Playgrounds randomly generates which power-up you receive.

Lottery Picks add variety to a game that often feels like a back-and-forth match of three pointers. It also gives you a reason to perform dunks and alley-oops, which otherwise just don’t dish out enough points to be useful. The biggest problem is that opponents on single player are ridiculously good at blocking dunks. They can knock the ball from the player’s grasp even when they’re several feet behind. Blocking a dunk is far more difficult to execute on the defense, meaning that opponents will build up their Lottery pick meter quickly. The difficulty of performing a successful dunk means that aiming for a three-pointer is usually your best option. 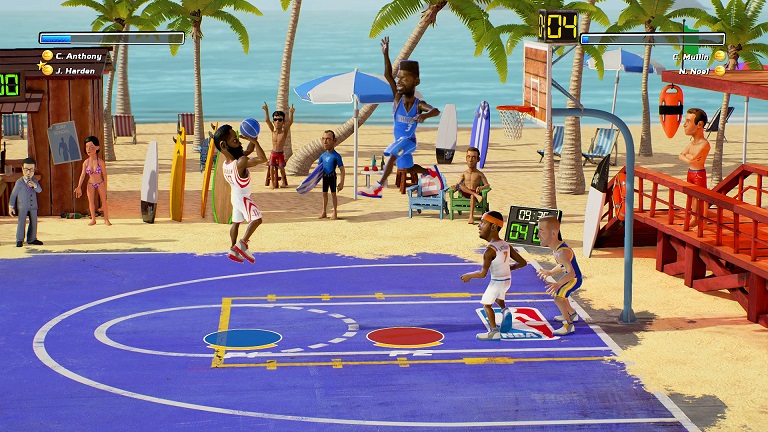 NBA Playgrounds doesn’t mess around on the court.

The single-player mode for NBA Playgrounds is a harrowing experience. Opponents are tough to beat even at their easiest. They can make insane shots with pinpoint accuracy, especially as their difficulty rises in Tournaments. What makes opponents so frustrating to face, though, is that blocks just aren’t consistent enough to slow their rampage.

Once you’ve gotten the swing of NBA Playgrounds, it’s easy to rack up your own score counter. Perfecting the timing of shots, learning how to avoid getting blocked, and taking advantage of Lottery Pickets all becomes second nature. It is far more difficult to prevent the opponent from doing the same. Stealing is the most effective way to get ahead of the game, but it consumes stamina and they can easily use crossovers to dodge your strikes. Pushing the ball out of their hands is another option, but your ally is rarely in the right spot to take advantage of it (meaning that the player who dropped the ball can just pick it up again). Worse yet, the crowd becomes unhappy if you shove the opponent and drains a hefty chunk out of your Lottery Pick meter.

A hands-off tutorial elbows you right into the action. Its surprisingly steep learning curve can mercilessly trash new players even in their first match, making it difficult to play with friends who might want to pick up the game and start competing. It closely mimics skills and techniques found in real life basketball games, but dirties itself in the details. NBA Playgrounds is great fun when it works and is an absolute blast to play against equally matched opponents, but feels cheap and unrewarding as a solo experience.

Full disclosure: This review is based on review copy of NBA Playgrounds given to HeyPoorPlayer by the publisher.