Paint the world of STRAFE in pixelated blood.

Indies have earned a reputation for banking on nostalgia. Yooka Laylee, Mighty No. 9, and the upcoming Bloodstained have all used crowdfunding to mixed and uncertain reactions. In that regard STRAFE is no different. While it avoids being the disappointment No. 9 turned out to be, those hoping for the second coming of Doom or Wolfenstein should stick to the classics.

STRAFE is a procedurally-generated first-person shooter with graphics revolutionary for the year 1996. It pokes fun at the brutal, gory nature of retro first-person shooters while reveling in their nostalgia. It may be cliché to suggest that the developers wrote a love letter to the genre with STRAFE, but they had a clear goal in mind: create a futuristic, rogue-like Doom.

Into the scrap heap.

In STRAFE, you play as a mere scrapper. Scrappers collect, well, scrap from other planets across the galaxy. Your scout ship has joined the gigantic spacecraft ICARUS on a voyage to the farthest reaches of the galaxy where other scrappers have yet to venture. If the ship’s on-the-nose name didn’t clue you in, things go horribly awry on ICARUS. When you return to your scout ship empty-handed, you find that the companion spacecraft is missing. Yet your teleporter to its innards remains functional. With little path forward you jump into the teleporter—but not before nabbing one of the three guns at your disposal.

You know, just in case. 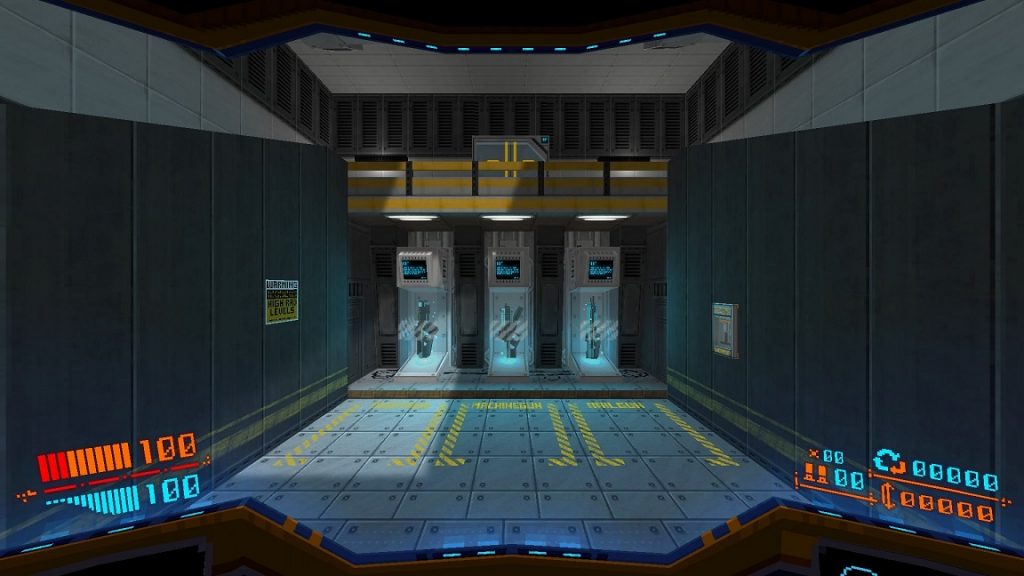 What’s a first-person shooter without its guns?

The three basic firearms are the Shotgun, Machinegun, and Railgun. Other weapons litter the ground but have limited ammo and cannot be upgraded. These include rocket launchers, energy blasters, and pistols. Once you’ve picked up your weapon of choice, STRAFE throws you right into the action of its first level, ICARUS. Here, you will paint the world red.

On ICARUS you can find several upgrade boxes that slightly increase damage, precision, or clip capacity. These are represented by vague icons on the top left corner of your screen. Upgrade stations are more spectacular, and can radically change the strength and ability of a weapon. The Machinegun, for example, may become a burst-firing rifle with horizontal spread, perfect for decimating hordes of enemy goons.

If you neglect to pick up any of the three weapons before jumping into the teleporter (an ill-advised decision), you will find a wrench you can use as a melee weapon. This wrench is stuck halfway through a man’s head near the beginning of the level. Its damage is decent but its range is pitiful, forcing you to whack at enemies like a madman while praying they won’t hit you—and they will. Instead of upgrades, you’ll find boxes full of health packets to loot. If you really want to mix things up, it’s at least worth a shot. Not like you’ll survive long anyways… right? 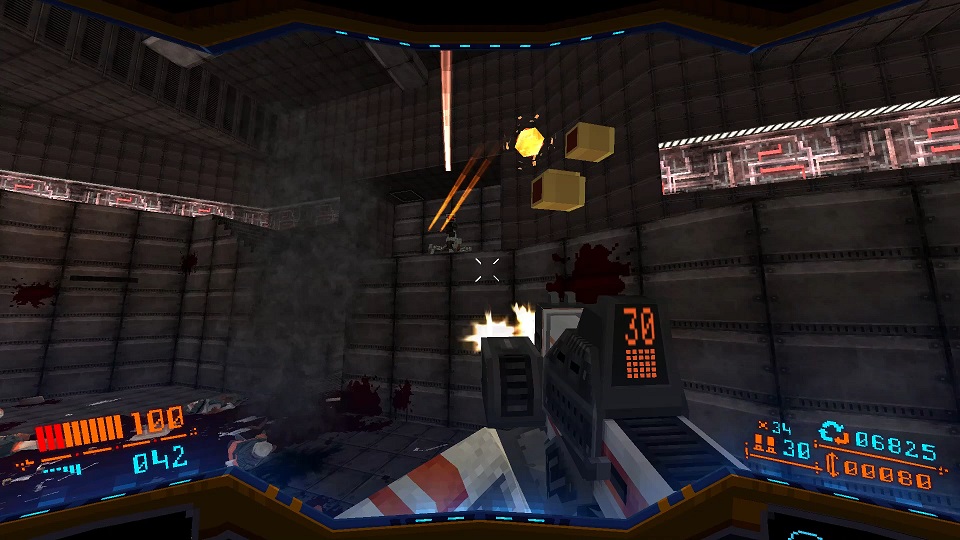 And what are guns without enemies to obliterate?

As you progress through STRAFE’s worlds, enemies become more varied—and deadly. In the first level there are Gluttons, Turrets, and Stalkers that haunt your every step. Gluttons are thuggish, wrench-wielding goons and are the least menacing but most numerous enemy in the game. Pistol-wielding Stalkers are rarer, but take many more bullets to kill. The most insidious opponents, however, are beasts that lurk within grates and spew out gobs of homing acid. Even when they’re killed they manage to infuriate, acidic blood spraying across the floor. Their only saving grace is that they drop massive piles of scrap when shot. 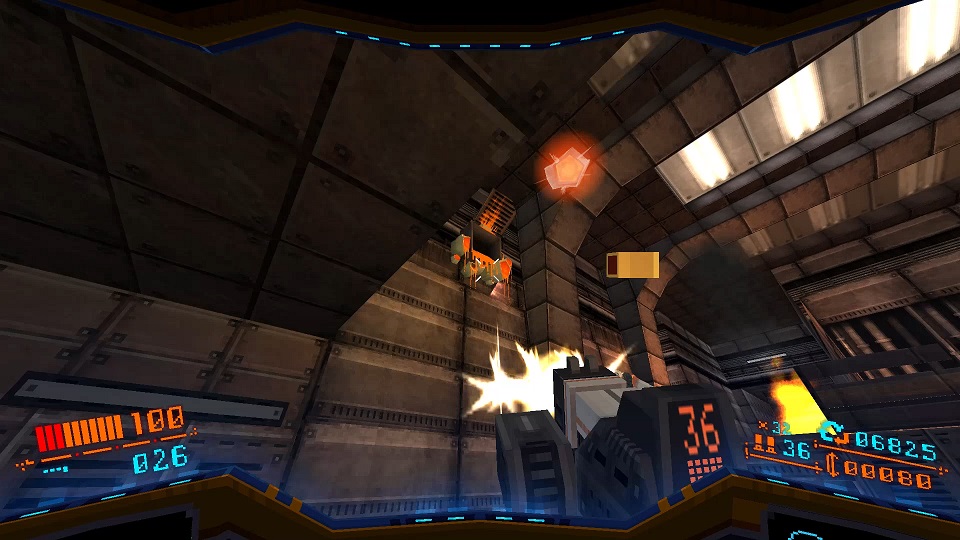 Scrap is the primary currency in STRAFE. It is used at specific vendors to recharge your shield or refuel your ammunition. If you can’t find one when you’re low on ammo, using your gun becomes a daunting prospect. Playing the game without shields is equally damning. Collecting enough scrap to manage both is crucial to victory.

The second form of currency is money. Enemies occasionally drop blue or green wads of cash that can be spent on turret-protected shops mid-way through each world. There you can buy unique upgrades like a belt that pulls in scrap and money or an item that regenerates a limited amount of health after each kill. 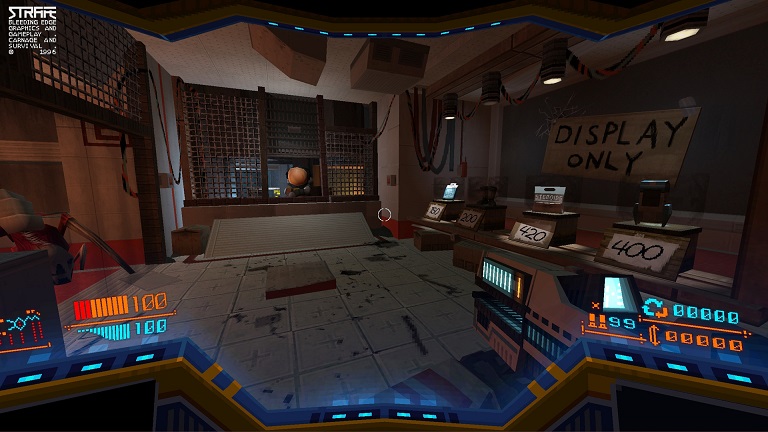 Rogue-likes are all the rage.

Each playthrough of STRAFE is different from the last. A massive number of rooms and hallways are picked from to create distinct levels. However, there are a smaller number of hub tiles that can be found in most runs. These rooms have locked doors that require a colored keycard or crewman’s head to unlock. Keycards (and severed heads) can be found among the randomized rooms, opening the path forward. These levels are designed to feel hand-crafted; only after multiple excursions into ICARUS does it become obvious how they fit together like pieces of a Lego set.

Once you’ve got a feel for the rhythm of STRAFE, gunplay becomes your sole focus. Any pause in action is a short rest before your next blood-fueled rampage. The game assumes that you will enjoy the repetition of playing through the same few areas, against the same few enemies over… and over… and over again.

STRAFE has a brilliant soundtrack filled with heavy techno-beats to keep your heart pumping to the action. Music ends after every enemy in a level is defeated, motivating you to hurry up to the next floor. In style, it reminds me of the Furi soundtrack. Its heavily synthesized melody is punctured by gunfire and bellowing enemies but somehow never loses its flow. You can listen to the full soundtrack by artist ToyTree here.

STRAFE is a game lost in time and space. It might have been revolutionary in 1996, but today it is a stark reminder that nostalgia can only carry a game so far. The game is polished like a fine jewel, but lacks ambition—a shine that might place it among the classics.

Full disclosure: This review is based on a Steam key of STRAFE given to HeyPoorPlayer by the publisher. 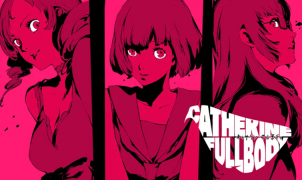 Love is NOT over Catherine is still, to this day, my favorite PS3 game. Few games reach the level of greatness the original Catherine achieved. It had everything —…