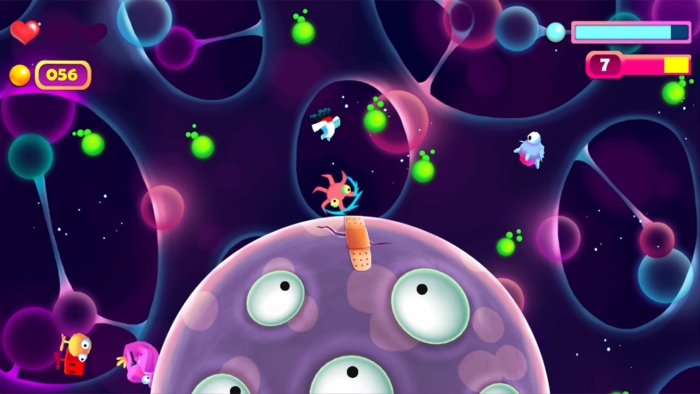 You know which is a sorely underutilized gaming trope? The human body. Sure, there’s been a few games set in a microscopic world, but even those are few and far between and they don’t really deal with the vast possibilities for conflict in a single-cell environment. However, occasionally a game comes along that understands bigger is not necessarily better, and one such example is the silly cellular excursion that is Plasma Puncher.

The game casts players in the role of a lone white blood cell as he (or it?) attempts to halt the invasion of viruses and their legions of associated microbes after the rest of the immune system has been decimated. Don’t roll your eyes thinking that this is Biology class all over again; Plasma Puncher is a thoroughly colorful and slapstick affair that seems like a Saturday morning cartoon more than anything else. What else can be said for a white blood cell with dreadlocks and a red sweatband? 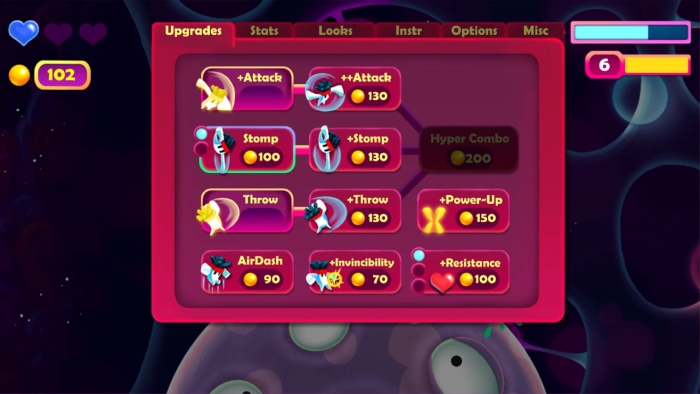 Things play out as a beat-em-up, with our hero quite literally punching the microbes to death. It joins a long list of similar fighters, including classics such as Double Dragon, Battletoads, and the various Teenage Mutant Ninja Turtle arcade games. The most notable difference is that the entire playing field is a single, massive, circular virus. The white blood cell is limited to walking either left or right, being confined to a small plane that loops endlessly. The virus needs to be destroyed, but at the start of the game, it is simply too powerful to succumb to any attack. Players need to contend with destroying the smaller plasmas and eventually producing enough energy to perform a body slam-style attack that will wear down the virus in question. Several of these attacks are needed to get rid of the virus, and actually charging up the attack will require you to constantly beat down several waves of microbes.

The enemies drop currency which is used to purchase various upgrades. Don’t think that this is an RPG, as the upgrades on offer are kind of shallow. Also, although new upgrades need to be unlocked according to a tree, there aren’t really enough branches to overly complicate things. Besides, you’ll find yourself still using your standard, simple punch attack for the majority of the game. Players will also have the option to use their currency to pay for replenishing health, forcing them into the choice between short-term and long-term benefits. Fortunately, health items and power-ups spawn infrequently, allowing you some relief from the onslaught (more on that in a minute). 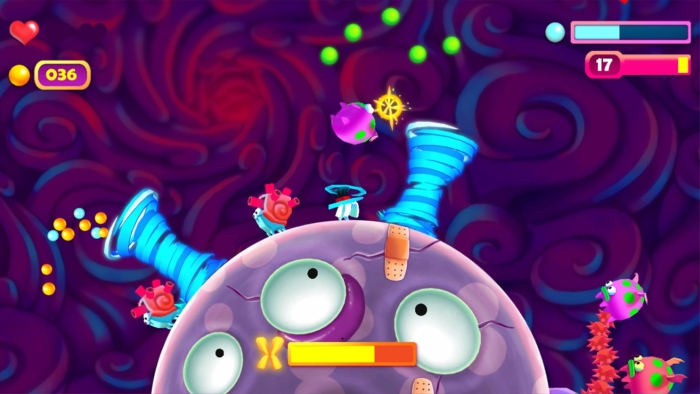 Gameplay can be quite challenging. It’s not that the enemies themselves are particularly smart or tough. It’s that, before long, they begin spawning in massive droves and you’ll soon find yourself overwhelmed. It also doesn’t help that a number of the microbes launch projectile attacks, flooding the playing area with all manner of dead zones and making jumping and dodging all that more trickier. It would be frustrating, but fortunately the end of each wave serves as a checkpoint, allowing you to continue without setting you back too far. All the same, some of the waves could have done with being slightly shorter, or perhaps fewer in number to avoid redundancy from kicking in, but this is a very minor knit-pick.

It’s fun to play, but it gets kinda old. You’ll be smashing the punch key endlessly on the same level over and over. A valiant effort was made to ensure more depth, but it isn’t quite enough. Regardless, with the excellent controls and cute sound effects and music, you’ll find that there’s a rather endearing experience to be had, and it makes for a fabulous two-minute little burst of gameplay. It’s just that some more arenas, additional visual variety, and an expanded move set would have gone a long way to keeping this one on people’s radars for an even longer time to come.

Plasma Puncher is a fun, stylish, and polished entry in the somewhat thin beat-em-up category. But the top-notch presentation and tight controls can’t quite hide the glaringly apparent shallowness and lack of variety in its levels. Still, if you enjoyed games like Streets Of Rage, then this might just be up your alley. Your finger will ache like crazy and you’ll get sick of beating up microbes, but you’ll have gotten quite a few hours of mileage out this one before that happens. Direct your browser over to its official Steam page to inject some mindless fun into your routine.

Full disclosure: this review is based on a Steam key for Plasma Puncher given to Hey Poor Player by the publisher.