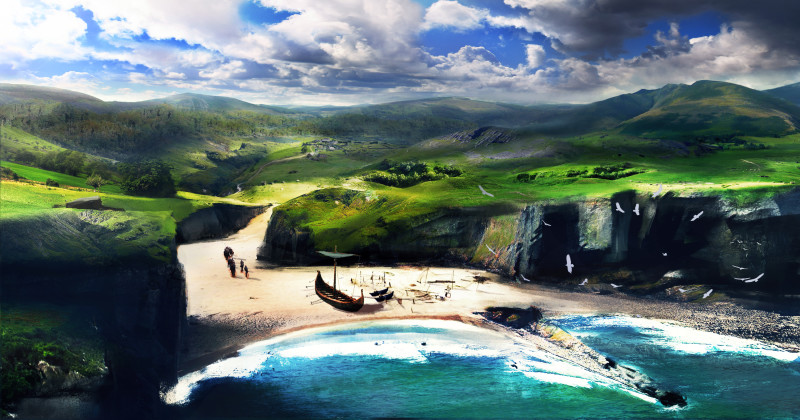 I was not expecting to enjoy Expeditions: Viking nearly as much as I did. I’m not really that familiar with the setting or viking history, as the most I know of this subject is Lief Erikson, and that’s only because of a bad Spongebob joke. There’s a lot of fun to be found in this unassuming CRPG, and a lot of the charm is tied to Viking fantasy presented. Is it perfect? Of course not – there’s nothing perfect in this world except for 2D waifus. However, this title is about as solidly made as steel helmet with horns and is as fun as a mead hall after a victorious conquest. As you can probably tell, my knowledge of actual Viking history is pretty awful, so let’s get to the review! 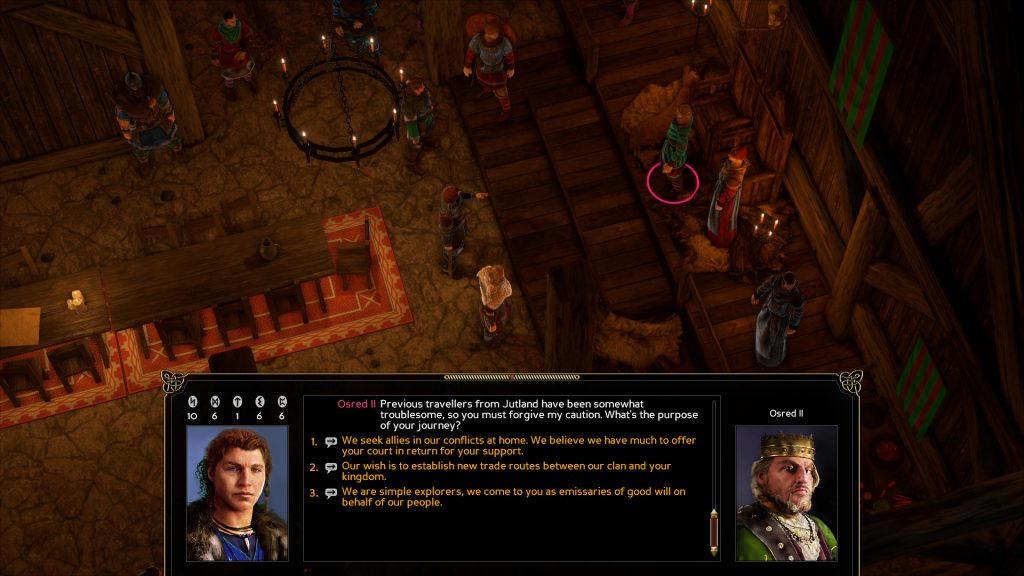 The game starts with your father’s funeral, and just like many fathers you are left with his mementos. Except instead of a beat up car or a stash of retro nudie mags, you are left with leadership of the clan. You’re father was a controversial leader at best, and it is your job to pick up the pieces and choose the direction of the clan. This isn’t without conflict however, as right out of the gate you are challenged to a fight to the death by a plethora of jerks – one of these jerks being your own cousin. So the game starts off strong, introducing you with a colorful cast of party members and NPCs. And your choices will not only impact your tribe but how the story progresses. Like many CRPGs you are given choices, and based on dialogue decisions the impact of these choices do change the story quite a bit. This was one of my favorite aspects of the game; the morality system affects how the characters around you react to you. It feels as though there is real weight to your actions and I dig it.

Now that is all well and good, but what isn’t is all the side stories and the scope of the story. Look, I consider myself able to pick up a story even if it is convoluted. However, Expeditions: Viking throws names and characters out so often and I’m just expected to know what it all means. At one point a character I met only once before was responsible for a raider attack on my village, but his initial appearance was so brief that my reaction was: “who are you again?” I know games like these are supposed to be heavy on the lore, but the exposition, surprising enough, isn’t adequate enough. I hate exposition as much as the next person, but I straight up got lost due to the amount interconnecting plots with all these forgettable characters. Later on the game introduces much more memorable side characters but there were still characters countless forgettable people you’ll quickly lose track of.

The Meat and Bones of Battle 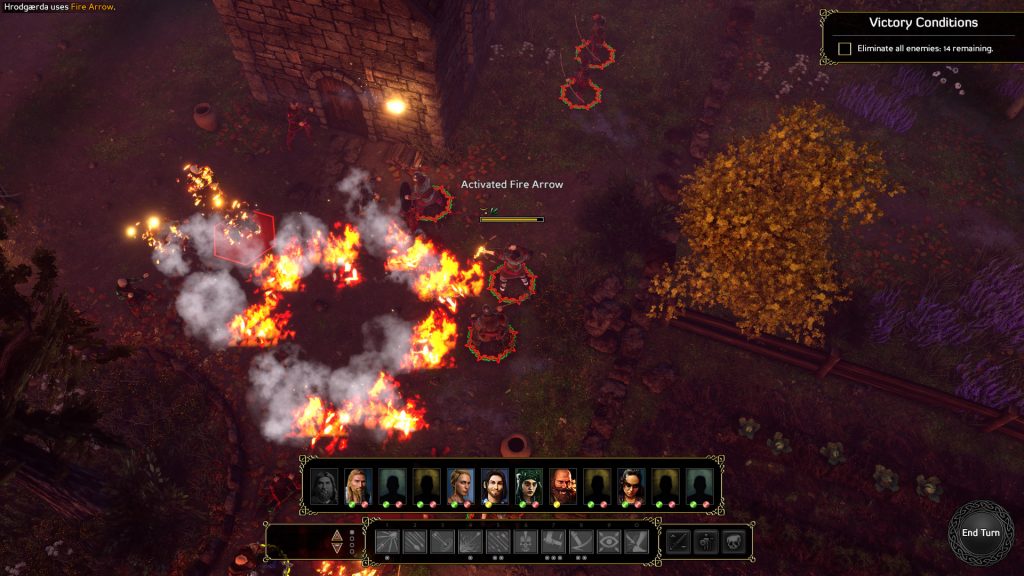 Let’s talk about combat: it is very difficult. Fun fact: the game’s default difficulty is also the hardest difficulty possible. I don’t think this is bad but be warned. The game works on a turn-based grid combat. You move, attack, use abilities and then end your turn. Then the enemy does the same. There are different types of character “roles”, abilities and environmental actions. These aspects make a combat system that will heavily punish you if you are not thinking about all your actions as well as the enemies actions. War of attrition isn’t viable and on the game’s default difficulty you will eviscerated into a heap of Viking body parts. I will say that there a couple of balance issues that people may have a problem with, such as archers being incredibly powerful to the point of being too strong at any point in the game or the injuries your party can sustain after battle. These injuries are very annoying since they linger after the battle and the only way to cure them is to make camp. There is a lot of depth especially late game, and those into the macro and micro of this type of game will love this.

As much as I like this type of combat and it does work on a base level, there are things that infuriate me. As far as I can tell, you cannot adjust the formation of your party when you enter combat. That doesn’t sound like a big deal but in a game all about slow burning strategy, it does put you in awkward encounters sometimes. Another aspect I do not like is that combat cannot be initiated without conversing first. I usually tried to talk my way out of fights but I do believe there is merit in the ability to initiate combat when you know that conversing isn’t going to solve anything.

Also, while not being related directly related to combat there are gameplay glitches. The big one for me was the game crashing during loading screens – thank god for auto saving. The other ones aren’t as bad and mostly related to load times or unit behavior. However, they didn’t happen to me frequently enough to say that the game broken or unfinished. Another big aspect of the game is the management of your clan, which feels clunky and unintuitive for the most part. The idea itself is very cool, but it is executed very poorly in the actual resource management department and decision making. Also, the needs of you clan are so vague and change so frequently that I found myself more annoyed than anything. I felt like I could never really meet the needs of my people no matter how hard I tried. I will say that the morality system mentioned earlier does affect how your clan will see you, and that is done pretty well affecting you relationship with your clan as well as other clans. There are more little gripes and unfortunately these do add up and hinder the experience. So while Expeditions: Viking does work most of the time and shines, it only does so a little more than half of the time.

Expeditions: Viking lacks the production values of other RPGs with a bigger budget, but the overall art style is fantastic. What the game lacks in spectacle in-game it makes up in atmosphere. The game’s setting really shines in the environments showing off the geography of this part of the world in all its glory. The actual in-game models of characters are underwhelming, but the design of buildings, ships, and terrain are very good. The music is stunning as well, really selling the Viking motif. You get a lot of really cool horns and strings from this time period and the BGM (background music) does change depending on the environment or scenario. So while in the overworld map or a village the soundtrack takes a more softer tone, while in battle it gets pretty intense. There’s enough in terms of visual and sound design to keep it familiar, but has enough of that Scandinavian flair to keep from being too iterative. So it isn’t the flashiest game out there, but the atmosphere and tone really does set Expeditions: Viking high up there in presentation.

Expeditions: Vikings is fun when it works. Unfortunately, there are quite a number of technical issues and annoying gameplay mechanics that keep the game from being one of the greats in this genre. However, the setting and plot add a lot of value to this title, and I did get enthralled at times. This is a game I definitely recommend checking out after patches fix some of the bugs. It is incredibly difficult, but so is the life of a Viking leader.

“Full disclosure: This review is based on a PC (Steam) review copy of Expeditions: Vikings given to HeyPoorPlayer by the publisher.”