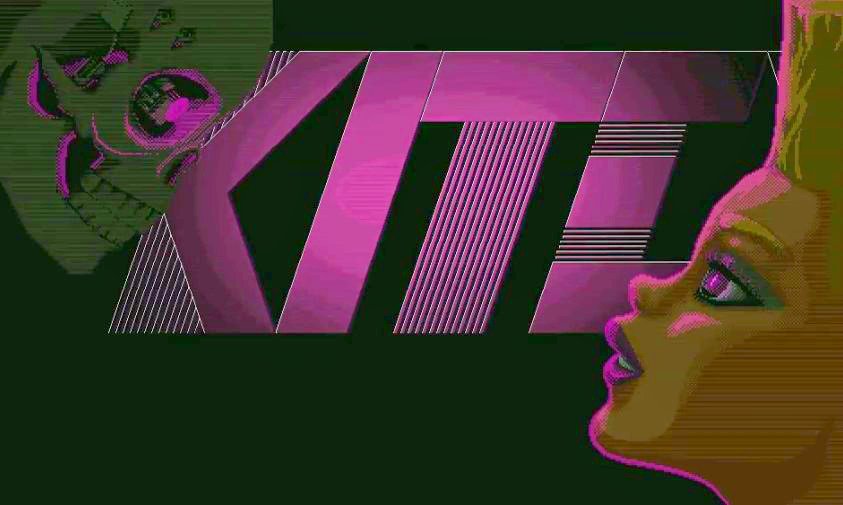 When I think of the 80s, one word always comes to mind — “cyberpunk”. Well, I guess “neon” comes to mind pretty often too, but it’s always alongside “cyberpunk”. The 80s had a very specific view of the future. One where technology was king, but in a different way than it actually is today. Being a 90s kid I missed out on the cyberpunk genre during the peak of its popularity, but that never stopped me from being completely fascinated by it. Alas, here we are, in the year 2017. The popularity of over-the-top, tech-heavy futures is not what it once was. But that doesn’t mean that it’s dead! Every so often the radical spirit of the 80s crops up for some fresh air, bringing with it a reminder of what made it so fun — and today, it has done so with a demo of the game Kite.

Kite takes place in a futuristic utopia, where nature and technology work together as one, that knows only peace. Because of the lack of wars and fighting, weapons are taboo. People are no longer allowed to own, or even manufacture weapons. Of course, that doesn’t mean that they’re gone. Completely hidden from the general public are a select few facilities that still research weapon development… you know, just in case. Unfortunately, someone — or perhaps something — must have caught wind of what was going on because one day, without warning, the security systems designed to protect the scientists in the facilities began actively trying to kill them. Their only hope of survival? Mags — a highly advanced droid with enough weaponry to equip an entire army, and very tall hair. 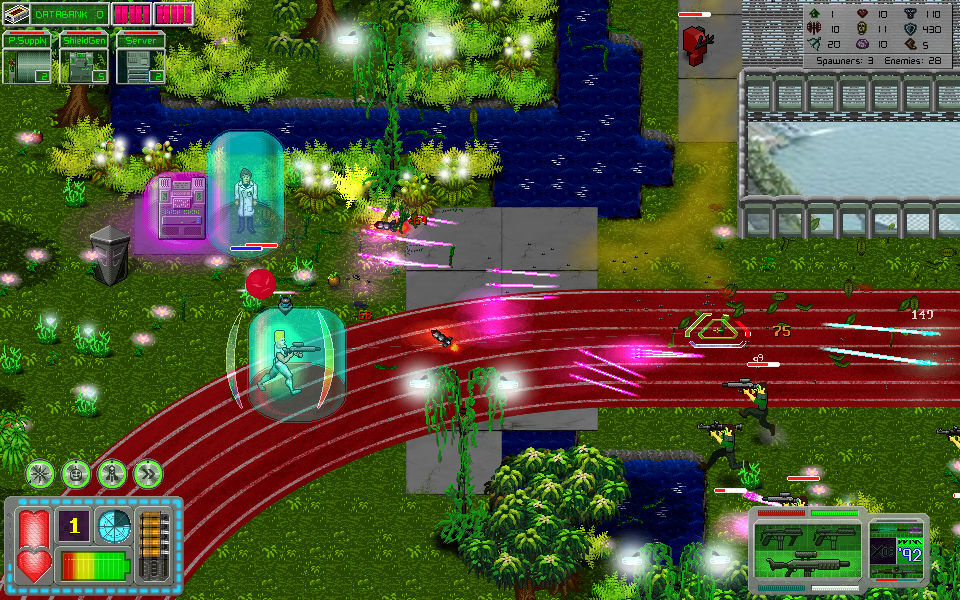 Those scientists won’t save themselves!

Being the retro-inspired top-down shooter that it is, you can expect most of Kite‘s gameplay to revolve around blowing things up while simultaneously avoiding being blown up yourself. Each level is teeming with plenty of robotic baddies for you to take down, and Kite gives you plenty of ways to do so. Mags has an entire arsenal of both ranged and melee weapons at her disposal, allowing for players to switch weapons on the fly in order to better handle whatever mechanical menace is currently coming at them. And if that isn’t enough, you can bring out the big guns. Literally. While players have the option to dual-wield, they can also combine their weapons into a combo weapon. Combo weapons are much stronger than normal weapons but they aren’t too friendly on the old ammo reserve, so it’s best to use them wisely. 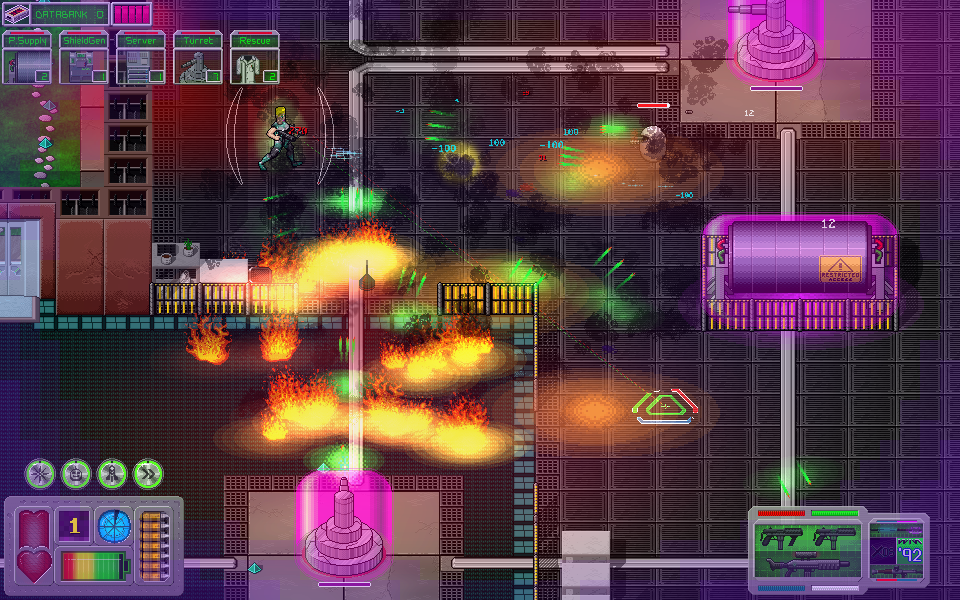 Things can get tricky if you run into every situation head-first!

You can’t just shoot at at things and expect to win, though. Trust me, I tried — it didn’t work out well. As you progress, enemies become more numerous and more complex, meaning that you’ll have to up your strategy. Mags has a number of unique abilities at her disposal, allowing players to dash, sprint, and even slow down time in order to get her out of tricky situations. Players can also equip Mags with a number of special abilities, allowing for teleportation, recovery, and more more. It’s a lot of information to take in, especially when you’re first starting out, but becoming familiar with all of the game’s mechanics pays off in the end.

Kite has a lot of customization. Like, a lot of customization. Between levels, players are given the opportunity to power up Mags as they see fit. Ironically, I found this to be both one of the strongest points of the game, as well as its one weakness. On the good side, there isn’t much that hasn’t been considered when it comes to character customization. Players can create and equip various kinds of equipment by utilizing the scrap (currency) they’ve found, and scientists they’ve rescued. Equipment comes in a large variety, and Mags has quite a few equipment slots (including ones for individual limbs), so there’s plenty to consider when it comes to deciding what to make. Fortunately, you’re sure to find something that suits you regardless of your playstyle. 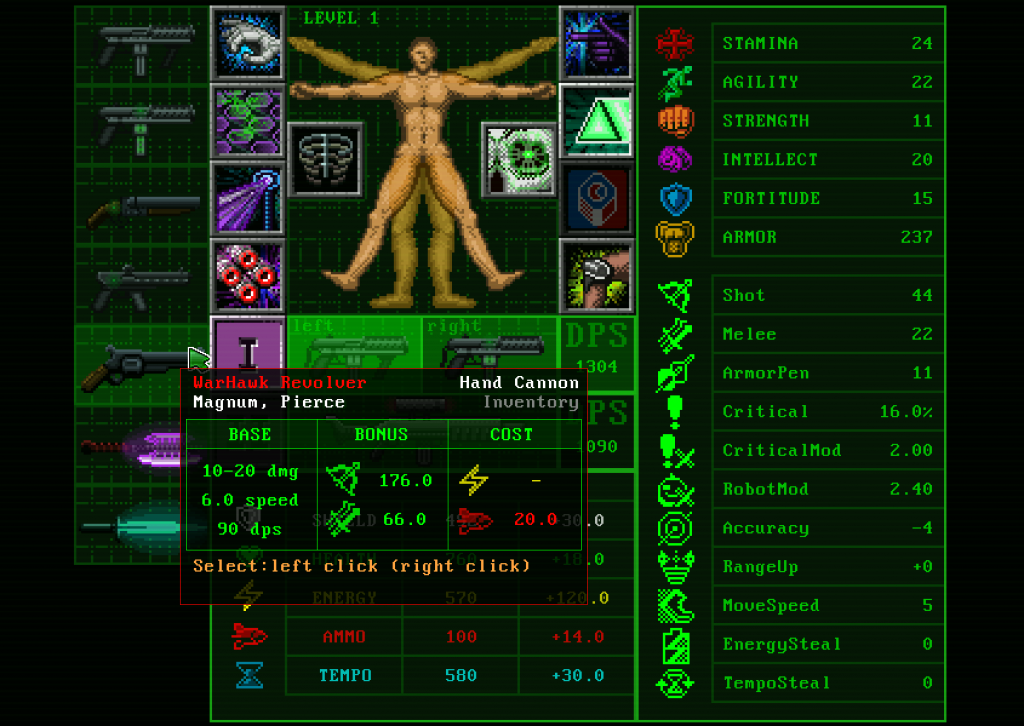 Mags can also level up by defeating enemies and, well, I think by destroying pretty much anything. I seriously leveled up after chopping down a bush one time. No complaints, though! Although leveling up doesn’t directly increase stats, it does allow Mags to learn new skills… most of which directly increase stats. Anyway! Skills are divided up into one of four skill trees, each of which has its own specialty such as melee weapons or defense. While it’s easy to level up, skills are balanced out nicely. I could definitely see a difference each time I learned a new skill, but I never felt too overpowered.

My only complaint with Kite‘s customization aspects was that they felt very busy. There were so may different stats to consider and, while I understood fundamentally what they did, it was hard to keep everything in mind when deciding on equipment and skills. More often than not, I just ended up buying the most expensive equipment and hoped for the best. With this being an early demo I can’t complain too much. It’s still something to keep in mind for the final product, though.

If the demo was anything to by, then Kite is shaping up nicely. Between the high-octane action, in-depth (albeit slightly overwhelming) customization options, and that unmistakably cyberpunk feel oozing from every pixel, I quite enjoyed the time that I spent taking down robo-baddies with Mags. The 80s may have come and gone, but Kite appears to be keeping its spirit alive and well.