The apple of my Samur-eye

I haven’t played too many Otome visual novel games. My list literally consists of Amnesia: Memories, and this game here – so yeah, I don’t have too much experience with this genre. Because of that, I kind assumed that Hakuoki: Kyoto Winds would be in the same vein as lot of the Otome VNs out there, crammed full of cutesy things, energetic anime boys, and an overarching plot that focuses on love’s ability to conquer anything – hoo boy, was I ever wrong! …Well, maybe not about the anime boys, but about everything else. Though definitely still a romance-based Otome, Hakuoki ended up one of the most exciting, and definitely the most violent, VNs that I’ve ever played, and I loved every moment of it.

What’s a Girl to do?

Hakuoki‘s story takes place in the mid-1800s and follows a girl named Chizuru Yukimura who, after a run-in with a group of crazed ronin while searching for her father, is saved by and then promptly taken into custody by a group of warriors known as the Shinsengumi. Although they originally contemplate killing her because of what she had seen, the Shinsengumi realize that Chizuru’s father is none other than Kodo Yukimura – a doctor with whom they were familiar. Despite some protesting from other members, the Shinsengumi eventually decide to take her in. Can’t you feel the romance blossoming already?

I went in assuming that this game would play out like a dating sim VN. You know, with time management and buying people presents and stuff. Well, it doesn’t. Despite how the game may sell itself, Hakuoki plays a lot more like a standard VN. Most of the gameplay is comprised of reading (surprise, surprise!), with the game occasionally asking the player to make a decision – but that’s largely where the similarities between this game and other Otomes end. Hakuoki takes place during a pretty intense political conflict, and one filled with plenty of fighting at that, so the decisions you make often have impact reaching further than just romance. 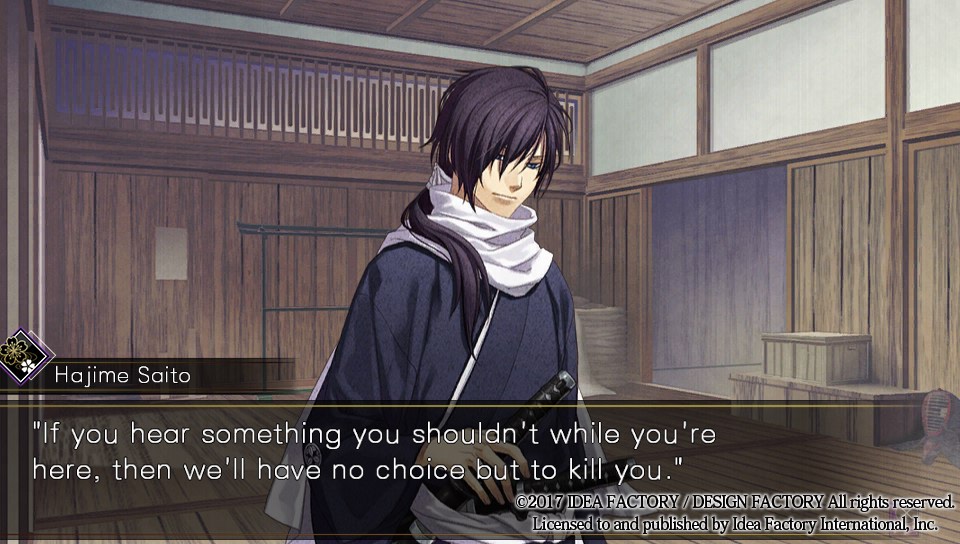 Like it or not, you basically start out as a glorified prisoner of the Shinsengumi. Rather than thinking about where to take the guy you’re crushing on during a date, most of your decision-making throughout the the game will be based on who you want to avoid pissing off, and how to help their war efforts the best you can. I’m sure that a scenario like that may not be everyone’s cup of tea, but it actually fits really well if you think about it. It’s important to remember that 1800s Japan is a lot different than where we’re living now. Respect and honor were harder to earn, and were much more glorified back then. Getting someone to fawn over you isn’t as straightforward in Hakuoki as it is in other games, but because of that it’s extra-gratifying when you do.

There’s also a lot of fighting. Like, a lot of fighting. Literally one of the first gallery CGs in the game is of a group of insane men, smiling and covered in blood. I’d be lying if I said that it didn’t throw me off initially, but once again I feel like it fits the setting really well. Hakuoki’s story is one of personal growth, overcoming fear, and fighting for what you believe in. The fact that Idea Factory managed to make a genuine love story out of a particularly violent period in history without ever toning down said violence is quite impressive.

Ronin Away with my Heart

So yeah, there’s a lot of action in Hakuoki: Kyoto Winds, but most of you are probably here for a different reason; the boys! Duh! For those not in the know, this isn’t Hakuoki’s first rodeo. The game was originally released back in 2012 as Hakuoki: Demon of the Fleeting Blossom, and featured five main romance storylines (plus an extra sixth one). Care to guess how many there are this time around? A whopping 12; double the original! Some of the new love interests are previously non-romanceable characters, while others are entirely new additions. No matter which way you slice it, there’s probably someone you’ll end up liking. Lucky you, Chizuru!

Hakuoki’s hunky harem may seem like it’s filled with nothing but battle-hardened warriors but, in reality, they’re all… well, no, they’re actually all battle-hardened warriors in reality, too. But that doesn’t mean that they aren’t all unique! It just takes some time for their uniqueness to shine through. Much like in real life, it’s hard to get a grasp on who each of the love interests really are at first. They may introduce themselves to you, and you may know some basic information about them, but getting to know them really takes some effort. It’s important for players to pay attention to the guy they’re going after, and to anticipate things that they may do or say. 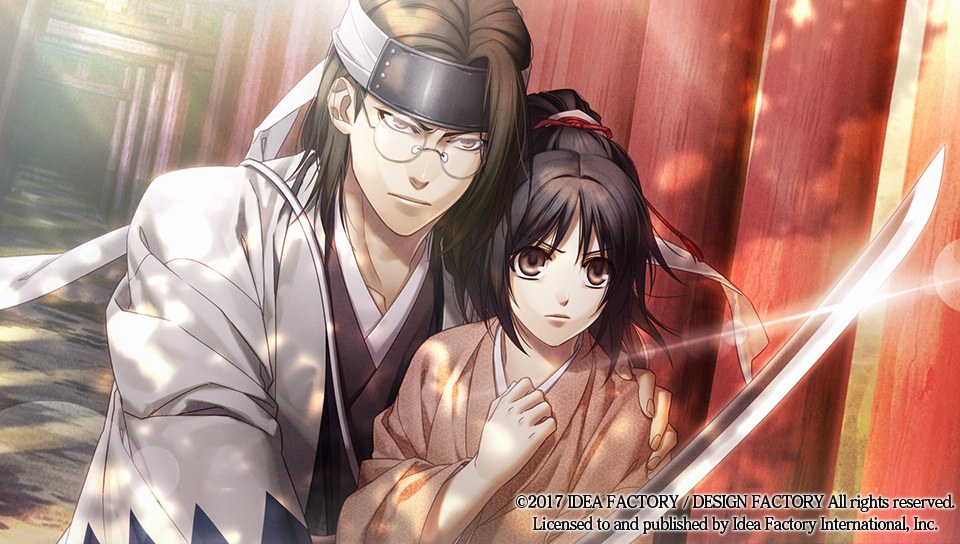 Love may blossom slowly, but it always stays true.

Timing is also important. The story unfolds in a way that will have players participating in a number of activities (most of which center around fighting), with a number of different characters. Because of that, you’ll need to make sure to spend time with your future husbando as much as possible, and to make the most of the time that you do have. Unfortunately, that can be a little confusing.

Because there are so many love interests, and because of how limited time is, it can be surprisingly hard to cross paths with the guy that you’re going after. As I’ve mentioned before, choices are rarely as easy as “which anime boy do you want to spend time with?” That would be too easy, after all! Usually, you’ll end up running into people while doing something seemingly unrelated to them. There’s even one particular instance where, depending on what you decide to do, you may completely avoid meeting several of the bachelors entirely. It’s even easy to miss certain events with some of the more prominent characters, due to the choice system’s frequent ambiguity. The whole trial-and-error thing kind of detracts from the experience but hey, at least there’s a way around that!

Get to the Good Part, Already!

Most visual novels equip players with means to skip through stuff that they’ve already seen, but this game really went above and beyond. In addition to the standard auto-play and text skip options, Hakuoki has a nifty quick-save/quick-load feature. Nervous about a decision? Quick-save beforehand. If you don’t like the outcome, you can simply go back in time and do it over. All it takes is the push of a button! 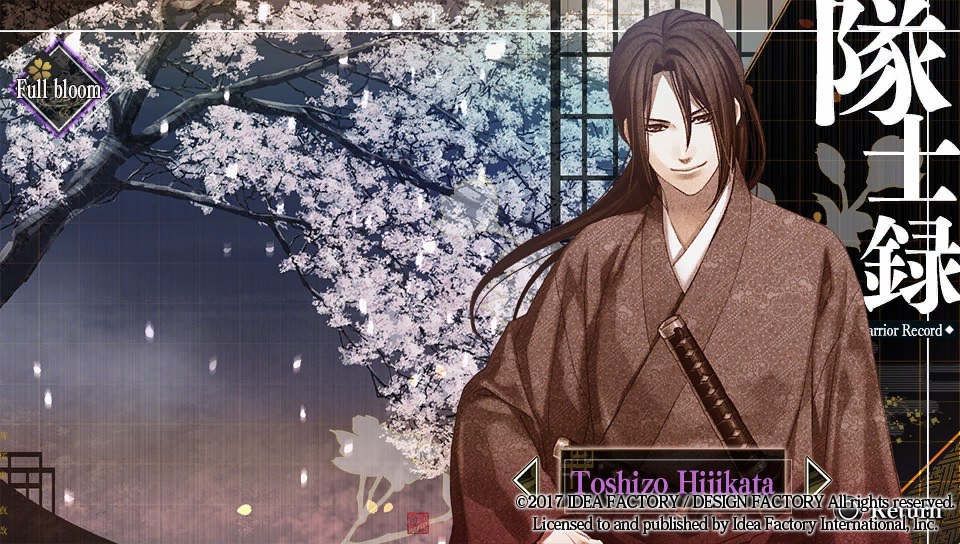 Still not impressed? Let’s talk about the Record of Service feature, then. Upon finishing your first playthrough, Hakuoki completely hands the reigns over to you in the form of something called “Record of Service”. By going into this menu, you can not only start a new adventure at any point in the game, but you can also automatically max out your romance with any character. If you don’t have the time to complete 12+ playthroughs, or if you can’t for the life of you figure out what you’re doing wrong (thanks, Chikage), then you need look no further than the Record of Service. Did I use it? Yes, once. Is it cheating? Probably; it certainly feels that way. But hey, at least I got to see the ending that I was after… You know, after failing several times and then giving up.

Hakuoki: Kyoto Winds isn’t just a good read – it looks and sounds nice, too. The game features plenty of beautiful backgrounds, and a nice pause menu. What? Oh, right, the bachelors. They’re okay. …Kidding! Every single character (and especially the lovers-to-be) is vividly detailed, each bringing about their own unique flair before even saying a word. Also impressive is the level of detail on the game’s many CGs. If you have high standards when it comes to VN art, you’ll be in good hands. 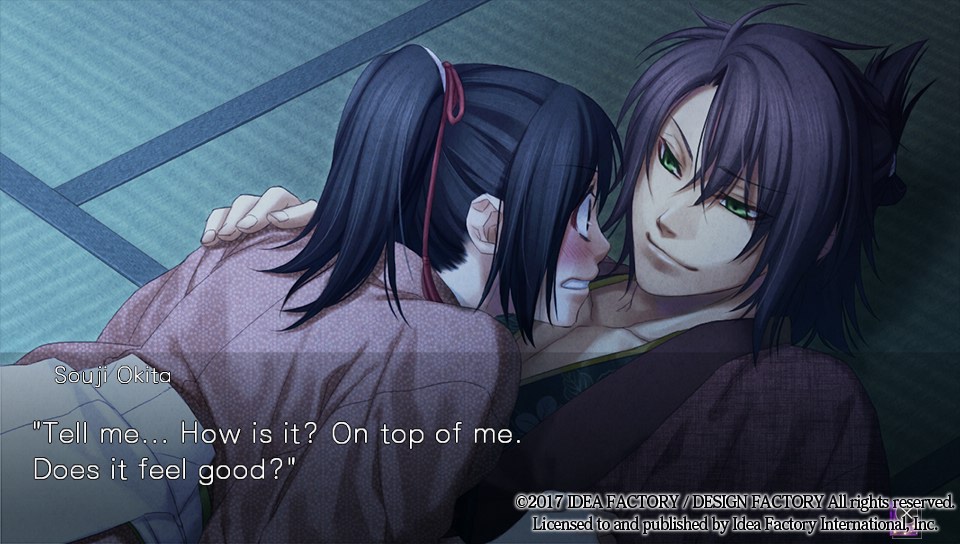 The voice acting is also good – at least, as far as I can tell. I’ve said it before, but English is my only language. I don’t speak Japanese. I don’t pretend to speak Japanese. So, unfortunately, I couldn’t actually understand what was being said. What I could understand, however, was how much effort had been put into the game’s voiceovers. You don’t have to be proficient in a language to appreciate the value of a well-read script.

Hakuoki: Kyoto Winds was great; plain and simple. Not only is it high-quality by visual novel standards, but it managed to teach me something as well; romance-centered Otome games can get really intense. If you’re into role-playing and are a fan of this genre, picking this up is a no-brainer. And even if Otome games usually aren’t your thing, I’d still recommend thinking about picking it up. Romance aside, Hakuoki: Kyoto Winds manages to tell a wonderful story about perseverance and the importance of companionship of all kinds. And hey, there are sword fights! Sword fights featuring attractive anime men (ani-men?)! Everybody wins!

Full Disclosure: This review is based on a copy of  Hakuoki: Kyoto Winds given to Hey Poor Player by the Publisher.