Bullet Soul sounds like an emo band I knew in high school. 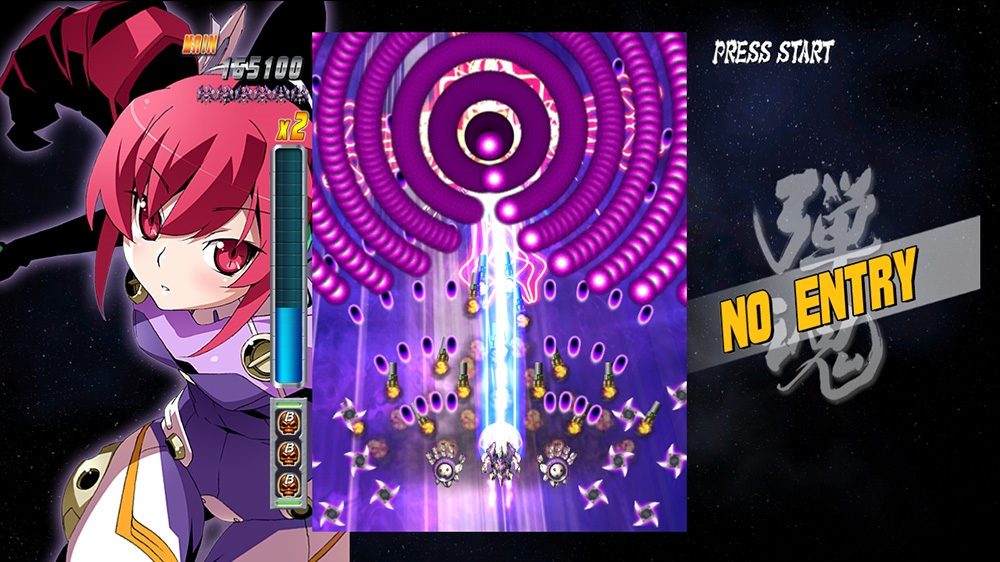 Oh Bullet Soul, oh how I wanted to enjoy you more than I did. Bullet Soul is a shoot’em up originally released for the Xbox 360, and I got to play the new Steam version which includes all the DLC. Look, I’ll be real with you: I like all the game genres I’ve had the joy to review on this site, but I can also admit that I am pretty average when it comes to video games. The same is true for shoot’em ups – however, even though I like this genre, this game feels very bare bones. It’s not a terrible experience by any means, it’s just painfully average. Something feels empty about this title, but I guess we can talk about that as we go. 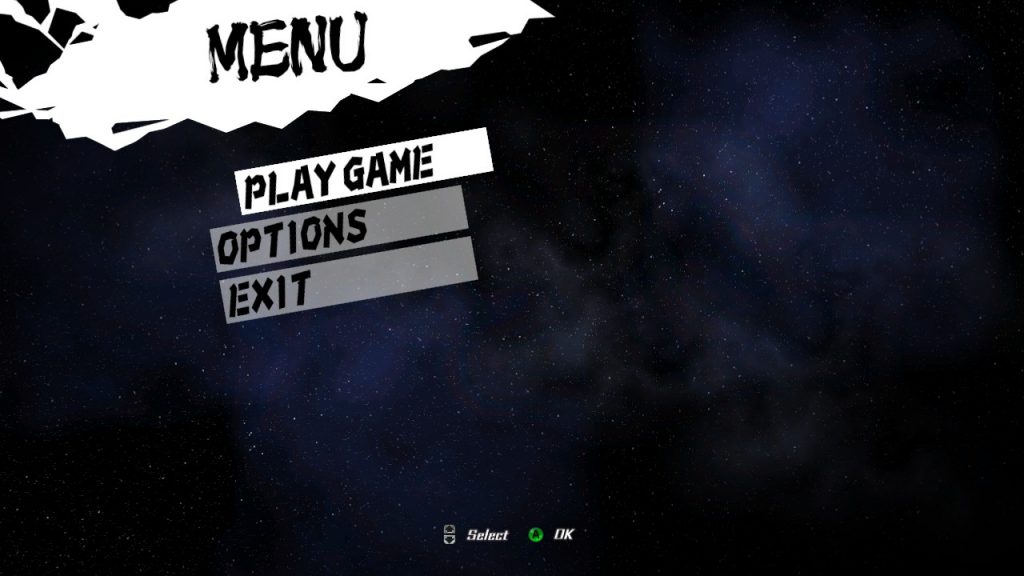 That sure is a menu.

One thing I want to praise the developers for doing is including optimization settings before you start the game. Many older games that are ported lack a lot of optimization features for newer monitors and resolutions, so that’s definitely appreciated. So after choosing your settings you start the game and are immediately sent to the title screen. There’s no cutscene that plays or any kind of visual greeting, which is fine – it’s very straight to the point. Still, in terms of UI and design, Bullet Soul is very uninteresting, and lacks real character. There’s very few animations and there’s no spark of visual charm. The menu has some transitional animations, but that’s it. Very bare bones. There are four game modes for this Steam port: Bullet Soul, Bancho Soul, Caravan Mode, and Bullet Soul Version B. The game modes are varied with different objectives and goals to accomplish. The modes are each entertaining in their own right and while there are only four they offer tons of replay value. 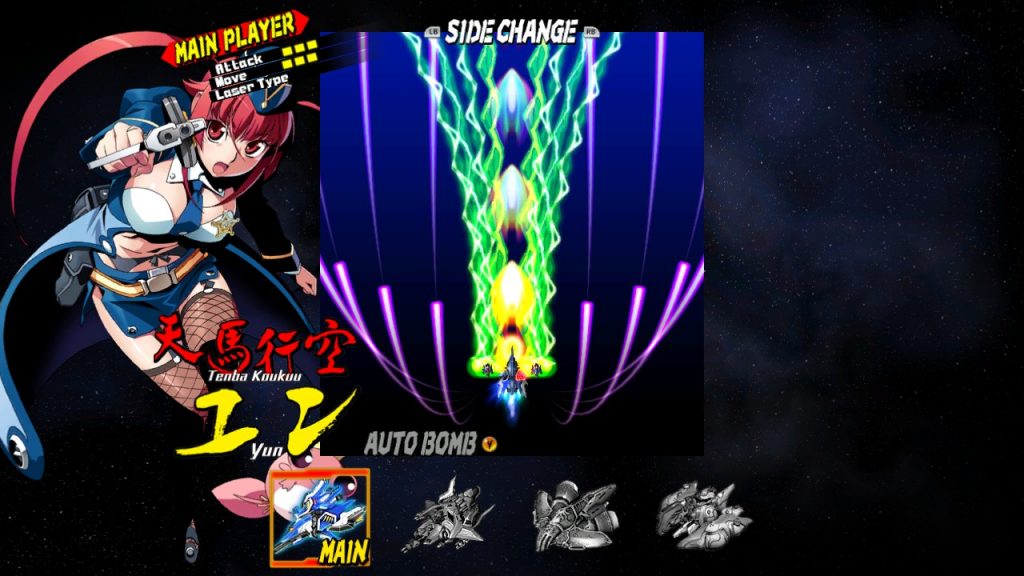 Let’s talk a moment about visuals, because I mentioned it a little bit earlier. The actual visuals when in combat are pretty good, and for a game originally released in 2011 it has certainly aged well. The ships are detailed and the color palette of everything is bright and bombastic. The animations are smooth and the game ran at a consistent frame rate despite all the chaos on screen. I also really liked the amount of creativity and effort put into making the different enemies look unique. While all that is good, the backgrounds are mediocre. There are animations going on but they are pretty meh, and while I know the background isn’t too important for a game where your focus in on the bullet hell action, it is still something I wanted to bring up. Also, most of the display is taken by side screen UI which is predominantly empty space – usually just a static image of anime looking character. I don’t care how cute this big tiddy anime girl is, it’s still a very boring looking UI.

Overall, while Bullet Soul looks good there isn’t much there to actually look at! The reason what’s actually there looks nice is because there is a lack of content. Now trust me, I know that quality will always outweigh quantity, but even what’s there isn’t visually transcendental. There is even art for the characters who are piloting the ships, but all it does is fill in the side of the screen. In the end, nothing will visually stick with you after you close the game. The best part about the game is the insanely good music. The music gave me good flashbacks to the Megaman X games, and man was it satisfying. 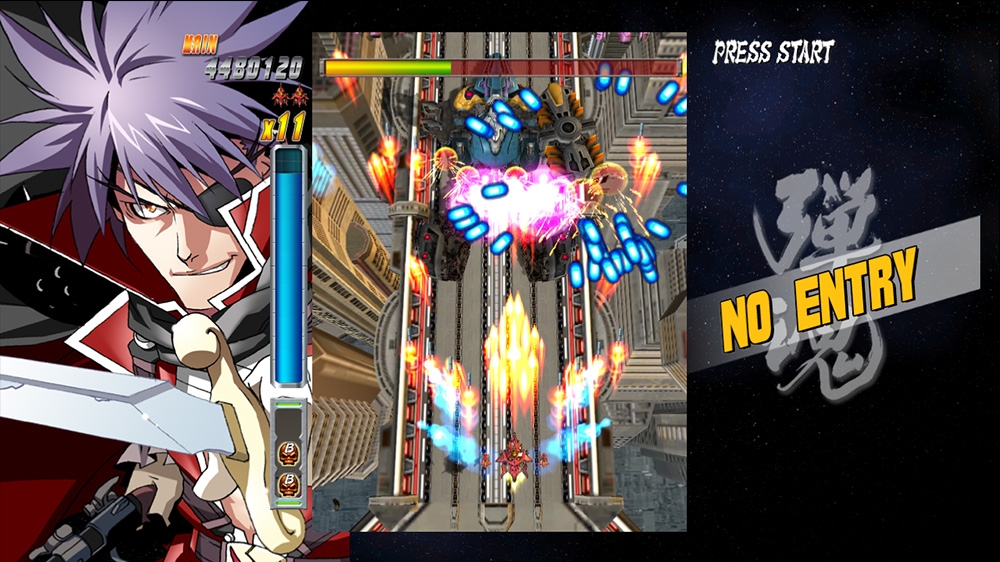 This game sure is a shoot’em up, and I feel like your enjoyment of the game will be dependent on how much you like this genre. You have three main attacks: bombs that blow up the screen, a focused attack and a more fanned attack. The overall mechanics are simple but I found that more enjoyable than not. If you’ve played bullet hell titles before this isn’t anything groundbreaking. Bullet Soul is legitimately challenging but never unfair, which is good because – believe me – after the first level of any mode, it gets brutally difficult.

What Bullet Soul lacks in content it makes up for in the drive to get a higher score. I looked at the current leaderboard for the game and damn do people put in work. This obvious drive to make people quest for high scores is Bullet Soul’s greatest achievement as a shoot ’em up. However, if you are like me and don’t care about climbing the leaderboard, there is little to no incentive to keep plugging away continuously. With no unlockables other than achievements, there isn’t much to keep casual players who aren’t high score obsessives coming back.

Bullet Soul is fine, but that’s kind of all it is. There is little to nothing here for people who aren’t already fans, and even fans have more options. This game originally came out in 2011, and many better shoot’em ups have come out since then, so Bullet Soul wouldn’t be my first recommendation. Bullet Soul is just overhelmingly mediocre, which makes it insanely difficult to talk about. Though it’s a middling experience, it’s inexpensive and there is a ton of replay value. If you like taking a one way trip to Bullet Hell, you will have fun. Everyone else, you’re better off looking elsewhere. The most ringing endorsement I can give is that it at least lets me play in window mode. Please game companies, for the love of all that is holy, give me more screen and resolution options!

Full disclosure: This review is based on a Steam review copy of Bullet Soul given to HeyPoorPlayer by the publisher.

RiffTrax: The Game Review: it's just a show, you should really just relax! Not only was Mystery[...]