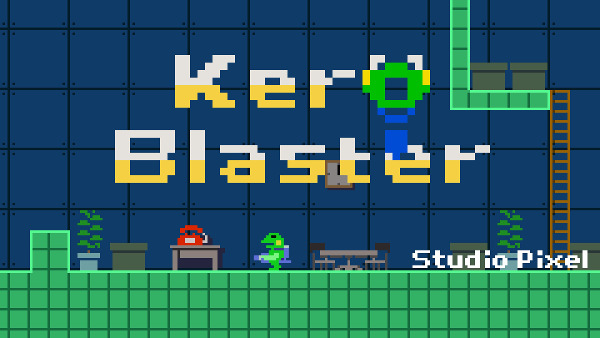 There’s a magic in revisiting the age of retro games. Sometimes, when there isn’t a major story based indie or AAA fps game that piques the interest, going back to one’s roots is the best medicine. Now for what it’s worth, Kero Blaster isn’t strictly retro. It came out in 2014 in Japan, and to the U.S. in 2015. Daisuke “Pixel” Amaya is the man behind Kero Blaster, who is also known for Cave Story. Now this delightful little title is available on the PS4, and for what it’s worth the translation works well.

You play as Kerotan the Frog, working for Cat and Frog (or C&F). It is your job to rid different locales of monsters to free up their teleporters. Each level features different environments, background music, and enemies that promise to keep the player on their toes. From fire flinging flora to vengeful fish, it is up to Kerotan to cleanse the city and make sure C&F Industries stays in business.

What keeps the gameplay feeling fresh for extended periods of time is the blaster upgrades. Kerotan (Frog) starts with only one type of ammunition, but the more bosses he defeats the more ammo types he unlocks. These fire types can also be upgraded with enough coins, earned via level progression and defeating standard enemies. By the time the game ends you have laser beams, ninja stars, bubble balloons, and a flame thrower. The player will also get a jetpack which makes all that platforming you’ll be doing a lot easier. 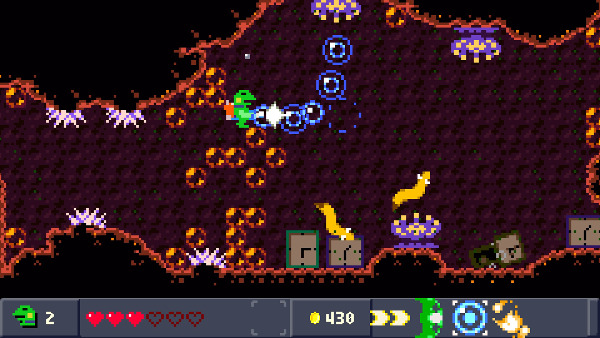 For a game that started as a PC title, the translation to PS4 is very seamlessly done. Controls feel natural and responsive, which can be the difference between life or death in some fights. The aforementioned platforming is challenging at times, but not impossible. In fact, the only craziness that runs amuck in this game is how varied and crazy some of the boss fights are.

On that note, it’s hard to figure out just exactly what the creatures of Kero Blaster are. There’s not a great deal of lore shared in what little narrative the game offers. The most prominent creature you’ll come across is the negativus legatia. These are quoted in the game as being “pieces of your past that have been cast off”. As to why these are here and whose past they are from is anyone’s best guess. Why, in fact, is the world of Kero Blaster so dangerous to begin with is anyone’s best guess. Regardless, whatever level of hell these characters dwell in is pretty fun to clean up.

With that being said, the only real fallacy with the game lies in its lack of lore building. The player isn’t really sure why they’re doing the things they’re doing. You’re fed a story about clearing the path for the teleporters that Cat & frog Inc. are responsible for, but after that you’re on your own. You’re more or less just shooting things because that’s what the game wants you to do. None of this is game breaking mind you, it’s simply a small complaint. 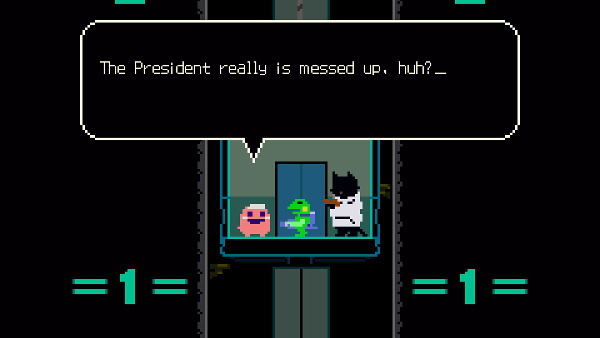 Some unintentional topical humor from 2014?

At the end of the day, Kero Blaster is a great deal of fun. Certain boss battles can be very trying on the nerves however. The game may require you to walk away at times, but it is enticing enough to bring you back for more after a sit down to cool off.

Sadly, this game is painfully short. If you manage to finish the last boss without having a hospitalizing spike of blood pressure, the game will take only five to six hours to complete. You’ll be getting your ten dollars worth for sure though, and when you wrap the main story that’s still not all. Amaya included what is called “Zangyou” mode as well. This translates into “Overtime” mode, given that overtime is a running gag amongst the characters in cutscenes. In reality though, this simply is the game’s version of hard mode. Frog dons a new skin (blue), one less life, and one less heart and starts all over again.

Don’t fret though, Amaya worked enough in to tweak the story a little bit to make this version palpable and desirable for the masochists at heart. The player will still earn new ammo types and be able to purchase more life. The Cat and Frog stores that can be accessed at every mid level point are still there as well, but the stocks are now more expensive. I’ve yet to determine whether or not the coin dispensation from enemies is lower, but I’d wager that’s a good possibility. 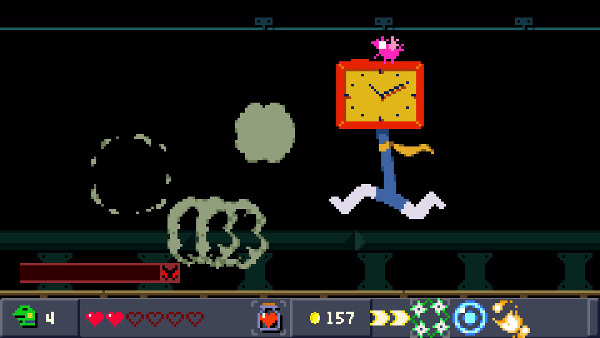 Feel like you’re losing time? Don’t worry, it’ll chase you down with all the fury of hell.

If you have ten dollars to spare and are looking for a new side scroller experience that offers some challenge, Kero Blaster is worth a go. The game doesn’t demand a whole lot of your time unless you want to dive into Zangyou mode, and this is where a lofty amount of the trophies hide if you’re into that sort of thing. Regardless, the experience and gameplay are rewarding. Kero Blaster will demand you think on your feet and flex your memory muscles to obtain the best results, but you’ll never regret a moment of your time spent with it.

Full disclosure: This review is based on a PlayStation 4 review copy of Kero Blaster given to HeyPoorPlayer by the publisher. 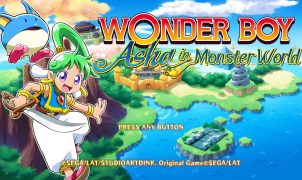