A Case She Can’t Afford To Lose! 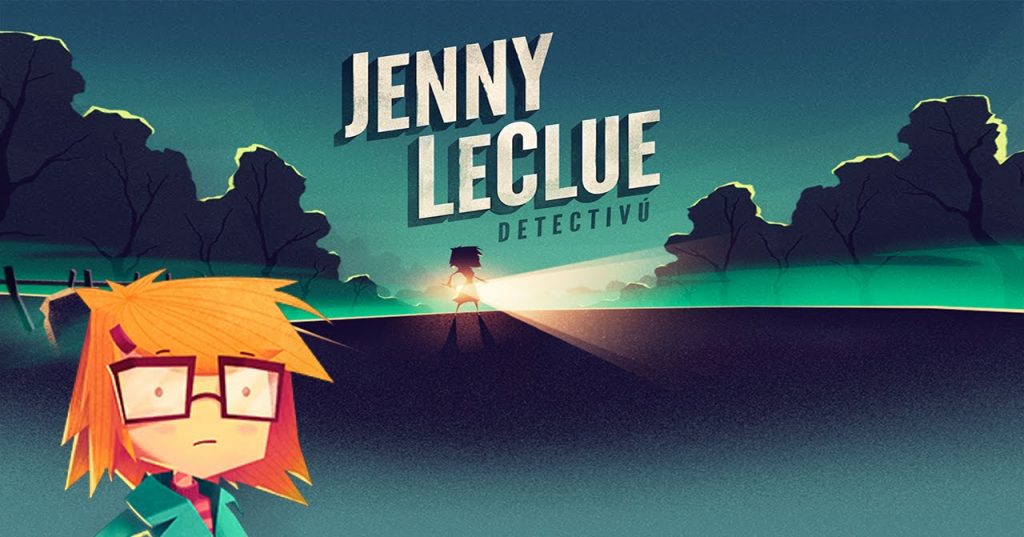 Jenny LeClue is just a normal girl from a normal town with a normal life. She has a normal family, goes to a normal school, and generally, normal things happen to her. Nothing is out of the ordinary when it comes to Jenny LeClue’s life, and she certainly likes it that way.

Oh wait, no. That’s not her life at all – as it would turn out, the young Miss LeClue is a super sleuth preteen with nerves of steel and a heart of gold. When strange things start happening in her town, culminating with her mother being accused of a crime most heinous, Jenny takes matters into her own hands and goes where no man (or girl) has gone before to clear her mother’s name. 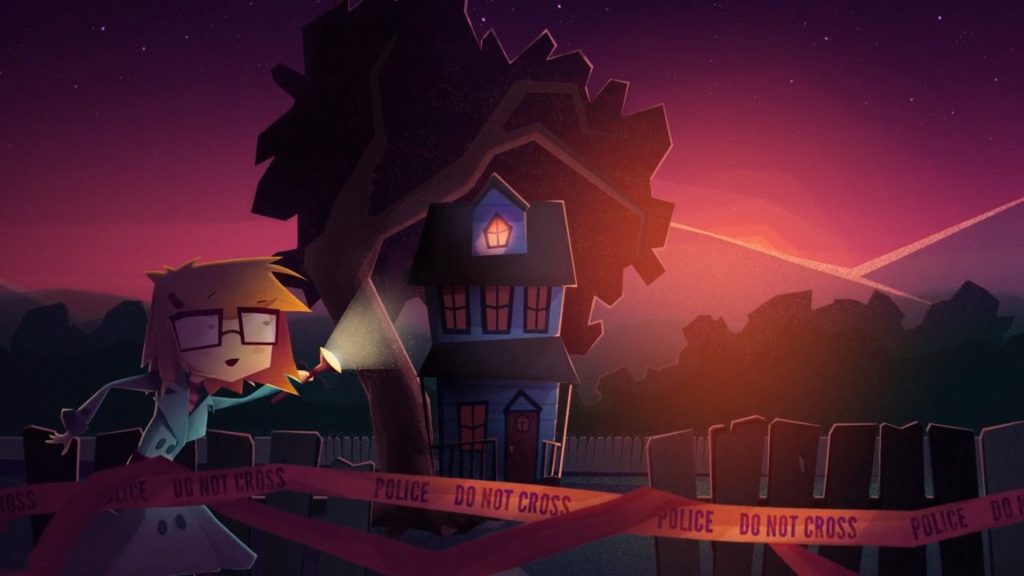 So begins the preview demo for Jenny LeClue, Detectivu. Created by Mografi, the game has been fully backed on Kickstarter with almost 4,000 backers donating $100,000+ to see this game come to fruition. It has been in development for several years now but should see a release sometime this year on Steam. I first became aware of this game earlier last year and instantly fell in love. A choose-your-own point-and-click adventure centered around a kid after my own heart? How could I not? The messy hair, the dorky glasses, and the curiosity that might get someone killed? Yeah, that had thirteen year old me all over it. I downloaded the demo and took a crack at it immediately.

The demo starts out in a dark, spooky setting where Jenny must break into a mansion to search for clues. I figured this wasn’t a jumpscare, but the first five minutes were so creepy that any sudden noises put me on edge and made me jumpy. The environment is beautifully illustrated and, as it’s a point-and-click, mostly interactive. Since you’ve just made Jenny break into a mansion, every little movement made me feel like I was going to be detected, which freaked me out more. Overall, solid A+ on the atmosphere! 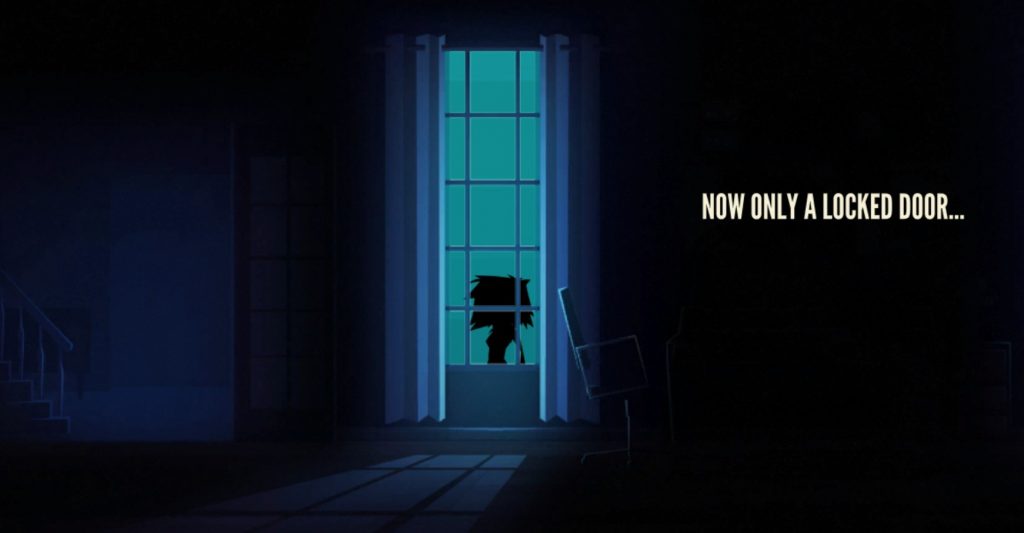 Controls were extremely easy, like any point-and-click game. WASD keys move Jenny, and pointing with the mouse interacted with the items around her. The sound effects were really spot on and added to the entire ambiance. The mechanics were smooth and fluid – nothing sticks, nothing glitches. Everything works as it should, which is really a rare thing of beauty!

The objective of the game, as previously stated, is to find clues to clear your mother’s name of a most heinous crime, so you have to actually look for clues in the environment. In this level, they were hidden away in the books in bookshelves, and by piecing them all together, you are able to receive a puzzle that you must solve. The puzzle was relatively easy, but it was still fun to solve a quick conundrum to keep the story progressing. 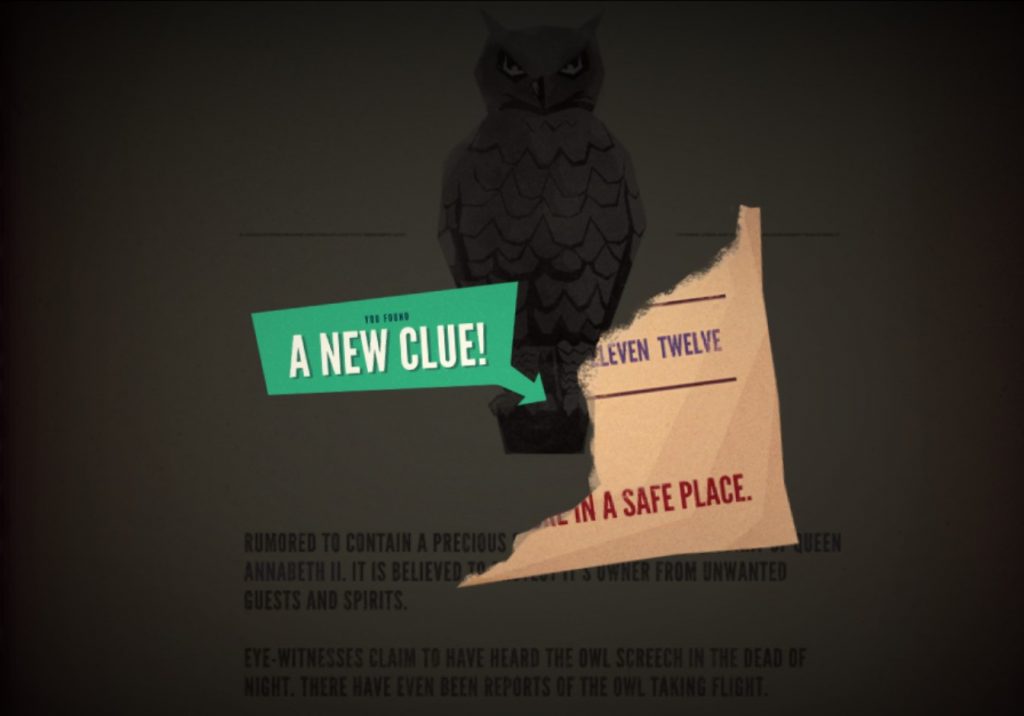 The game touts itself as a choose-your-own adventure in addition to a point-and-click, but because the demo was perhaps a bit too short, I wasn’t able to see much of what choosing my own adventure would look like. I imagine that the choosing part will be an integral part of the main game, and I am eager to see how the developers designed this mechanic. The very notion breathes life into the tired genre and I’m hopeful for the rest of the game.

One thing that really struck me about the game was how well the atmosphere sold me. As I sat down to play it, I unlocked the front door and crept inside. Suddenly, a person seemed to open the front door and let themselves in. I got so scared! I literally had to pull my headphones off and look away because I was afraid something would happen to me. That’s how realistic the setting was and how drawn in I already was within the first five minutes! I hate to use the term “immersive” for a point-and-click, but…dare I say I was just as terrified of something happening that I would have been in any horror game? I might be a complete wuss, but I at least became very invested in this game very quickly.

If I had to choose one favorite thing about this game, I think it’d have to be the character design. Every character has a unique, distinct look about them while maintaining the stylized graphics that make this game so cute. It’s definitely something that sets this title apart from the rest, and it makes me antsy to play more.

I can’t foresee any real issues with Jenny LeClue except for the fact that it’s been very successfully kickstarted and, like many other projects of a similar, high quality, it might stay in kickstarter limbo for much longer than anticipated. If we get a good game much later than expected, I think I’m okay with that – just…here’s to hoping Jenny LeClue sees the light of day (we think it will!).

Jenny LeClue isn’t the first point-and-click game and it certainly won’t be the last, but it is, by far, one of the more interesting and innovative games to come from this genre in recent years. It is a must play – even if you just play the preview demo – and you will not regret picking it up and spending even a few hours on this gem. Here’s to hoping Jenny LeClue does indeed release this year, as I’m eager to find out what happens to young Jenny LeClue, Detectivu!