The year is 2010. In the past half-decade we’ve had four God of War games and, because of the popularity of the franchise, a ton of clones. A few months before the release of God of War 3 comes a game hoping to differentiate itself from the myriad of similar titles. But what can compete with an edgy badass tough guy Spartan who’s seeking redemption from killing a bunch of people by killing even more people? Well, how about an edgy badass tough guy Templar who’s seeking redemption from killing people by killing more people in the bowels of hell? Yes, I am of course talking about Dante’s Inferno, EA’s answer to God Of War. Dante’s Inferno was decently hyped months before released, and there was even quite a little bit of controversy surrounding the title. But in 2017, the game is all but forgotten – hell, Nathan says even he forgot about this game until Blu Skye requested we cover it on YouTube. Now, while we do have criticisms of this game, we still enjoy it a lot, and we want to share our thoughts on why we think, though iterative, Dante’s Inferno isn’t nearly as bad as people make it out to be.

Set during the time of the Third Crusade, the game has players taking on the role of Dante (reimagined as a Knight Templar) who literally in the first hour of the game invades a Muslim city, kills Death, and descends into the depths of hell. He undergoes this descent in order to rescue his fiance, Beatrice, who’s been murdered, inexplicably stripped of all her clothes, and had her soul dragged under by Lucifer. Dante’s Inferno’s story gets a lot of flack, but I really don’t think it’s that bad. First of all, I think that having the plot of a videogame take inspiration from Inferno, the epic poem written by Dante Alighieri, is a really cool idea. The game takes many liberties with the poem, but it’s still fascinating to see this Christian work being made into a gory action spectacle. While the actual plot is pretty derivative – it’s literally the exact same story as Mario but with gore instead of cute mushrooms – the way Christian themes are used is very intriguing, especially since we very rarely see games that tackle religion head-on. 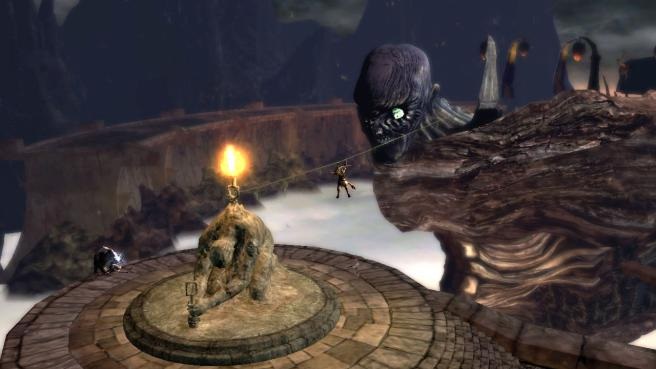 The main theme of the game is redemption and salvation, meaning salvation in the Christian sense. While the execution of this particular theme  is…well, let’s just say that “in your face” barely begins to cover it, if you read between the lines you’ll find some really well-written moments with much more subtlety and nuance, especially relating to the subjects of sin, punishment, and absolution. For example: when Dante is shocked that Death wants to send him to hell because he believes that a bishop absolved all of his sins, which, wow, is a pretty ballsy thing for a videogame to suggest. Or when Lucifer says that Hell is only getting more hellish and crowded because assholes like Dante exist and make his job easier. Whether or not Dante deserves redemption and whether a lifetime of inflicting suffering equates to neverending suffering are questions that will be tested as you play through the game. Dante’s not a redeemable person, but does that mean that everyone around has to suffer just as bad as him?

There’s so many cool philosophical and theological ideas addressed in this game, and it’s a shame that the main story never bothers to focus on them. Maybe they felt like they had to tread lightly around the elements that invoke Christianity, but no matter the reason, these ideas are still there, and I believe that if the game’s story was as bad as people make it to be they wouldn’t be. I even believe – and this is just a theory – that there’s a little bit of a Catholic guilt motif going on as you play. Regardless of your religious beliefs, the execution of these ideas is solid, and y’know what? The main story’s not that bad. The setpieces are cool and Dante’s story isn’t terrible – it’s just a perfectly servicable action hero “save your girlfriend” plot. Plus, there are some really genuinely interesting side characters. 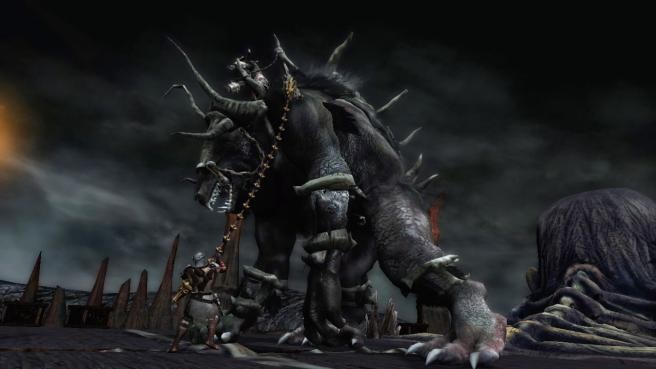 The main problem with the game’s story (and, some would argue, with the game itself) is that everything else has to take a backseat to Dante’s Shadow-the-Hedgehog-esque edgy badassery. But, allow me to play devil’s advocate here (haha, devil) and suggest that maybe the game’s all-encompassing 90s edginess isn’t all that bad? I mean, this is Hell we’re talking about, and furthermore it’s the Hell depicted in the poem, which reads more like a 14th century horror novel than anything. And while I do wish the game used more than one color palette, the actual interpretation of hell is visually stunning. There’s no denying that the designs of the levels, environments, and especially the enemies are pretty creative and interesting, a mix of dark-age interpretations of demons and modern iconography. One example that always comes to my mind is the design of Cerberus, which looks like a really creepy mixture of the serpents from Dark Souls, a parasite, and a mudfish. In fact, most of the set piece bosses have great designs and stellar environments to fight them in. And even if the color scheme never stops looking like the inside of a Hot Topic, at least the different circles of Hell all feel like different places with changes in the visual design to account for the sin each represents. The graphics don’t look as technical and polished as they did seven years ago, sure, but the enemies and environments are so stylish and have such unique designs that they actually still hold up even today.

All right, having already lost most of our viewers by complimenting the game’s lore and visual design, let’s get on to the stuff pretty much everyone can agree was good: the action combat. Dante himself handles pretty well and even the game’s detractors have to admit that the game’s not hard to control. Plus, I love the scythe you get at the start of the game. This will be more or less be your only weapon as you play, but that’s not a bad thing because it’s an awesome giant scythe, and the animations have this weight to them that makes it feel really fun to fight with. Plus, I’d rather have one really fun way to hack enemies to bits than a multitude of weapons that all essentially do the same thing with various levels of ineffectiveness (cough cough, Breath of the Wild).

Now I will say that the hardest difficulty setting is where the game really shines. Unlike the disappointing lower settings, this is where your use of smart positioning and the combo system will really be tested, and at least for the first half of the game the enemies actually do have good AI. Now, while I do agree that the skill system is flawed, I think the idea behind it is really cool. Moves and abilities are categorized into Holy and Unholy, and they’re tied into the kind of shallow and boring morality system that plagued games around this time (and, for some reason, modern Bioware games). Leaving that aside, the idea of having the skills that complement core mechanics is cool, and it’s fun to encounter enemies that require a specific type of attack to be damaged. Again, it’s poorly executed, and the morality stuff can go die in a fire, but it’s not a bad idea. What is well executed is the overall combo system. Like God Of War, your combos are broken down into a combination of light and heavy attacks. The combat feels fast-paced and weighty, which is good because there’s not a ton of variety in combat encounters and keeping things fast means that these fights don’t feel like a slog. 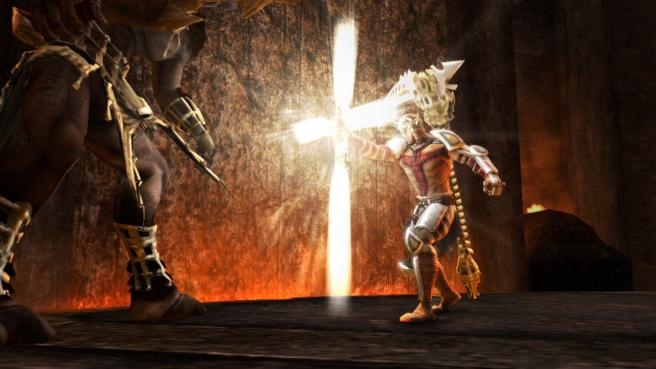 Now, I will agree with those who hate the game on this: the interesting design of the first half of the game is almost completely lacking in the second half. The back end of the game doesn’t add anything new in terms of gameplay elements, and even the basic mechanical systems seem to be handled with less finesse. However, it’s still worth sticking with the game just so that you can experience all of the amazing boss fights. Every boss in the game is creative as a visual design and as a combat encounter, even in the second half. These are easily the best fights in the game, as well they should be.

In the end, sure, Dante’s Inferno has its problems. If more was done with the skill system and if the second half of the game had better AI, this probably would’ve gone done in history as a legendary action title. But even the flawed product we got deserves to be remembered as a wholly original and groundbreaking product in its own right. I mean, come on, it’s a hyperviolent action game based on an ancient poem whose zealously religious hero is struggling with the possibility that his faith is based entirely on lies. It has a visual style that – I’ll say it – is a lot more inventive than the gray and brown vision of ancient Greece the God of War games offered. At its worst it’s still far from horrible, and at its best it’s a fascinating piece of entertainment. Plus, it’s darn good fun.

It might be a God of War clone at heart, but it’s the sort of clone that can go toe-to-toe with the original. It may not be the most creative game of all time, but it still deserved more recognition than it got.