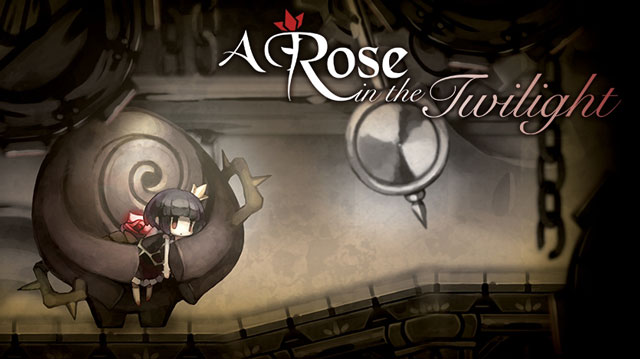 The concept of “cute-horror” or “cute-gore” isn’t one that’s widely-used. Many people like cute things, and many people like gory horror, but the idea of taking something overly-cute  and turning it into something gory while still maintaining that visual facade of innocence seems to make people uncomfortable. I suppose that I can see why people would want to keep those two things separate, but the fact still remains that combining those two things, and doing so effectively, can lead to tremendously good shock value – and that’s exactly what Nippon Ichi Software has done with A Rose in the Twilight.

A Rose in the Twilight follows the story of a young girl named Rose and her mysterious guardian giant as they explore a castle so abandoned that even time doesn’t function properly. Afflicted by the Curse of Thorns, signified by a large rose on the victim’s back, Rose must use her newfound ability to control both time and color (blood), as well as the giant’s super strength, in order to make it through the castle and discover the dark secrets lurking within. 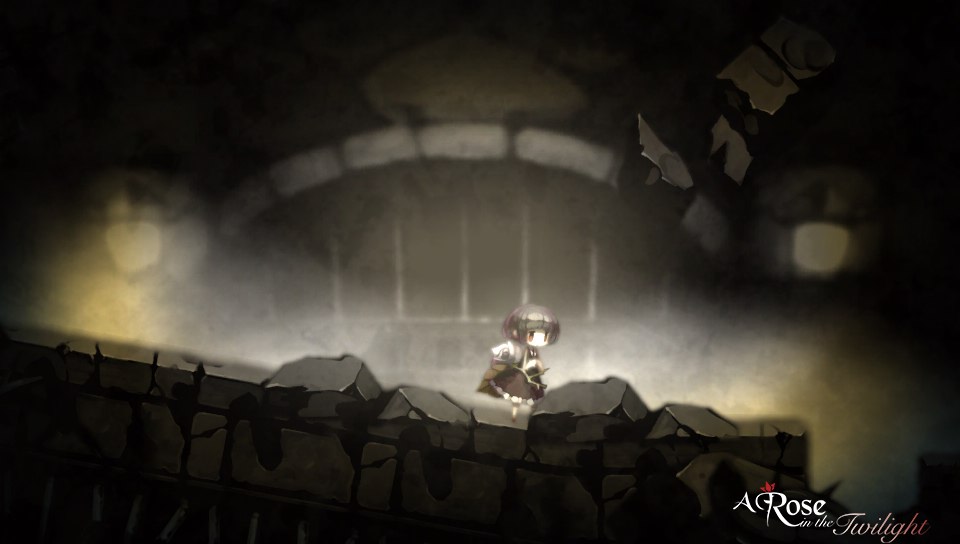 It can only get better from here! …Right?

Being a spiritual successor to htoL#NiQ: The Firefly Diary, A Rose in the Twilight manages to capture a brilliant pop-up storybook-like elegance, and once again infuses an alluring combination of cuteness and horror into its narrative all too well. Despite having the Curse of Thorns at her disposal, the game never lets players forget that Rose is, above all else, a little girl. Normal children are relatively fragile, and they usually don’t fully understand what’s going on around them – A Rose in the Twilight accomplishes this sense of lingering helplessness quite well, forcing players to act smartly, and make sense of things for themselves, in order to survive.

A Rose in the Twilight‘s unique and somewhat ambiguous method of telling its own story is also very fitting for its setting. Although plenty goes on, there are very few actual cutscenes in the game. Rather, it is up to the player to uncover the mystery of the castle through the collection of journal entries and Blood Memories. Journal entries are exactly what you would expect them to be – fragments of someone’s journal detailing their own experiences. Blood Memories, on the other hand, are a little bit different. 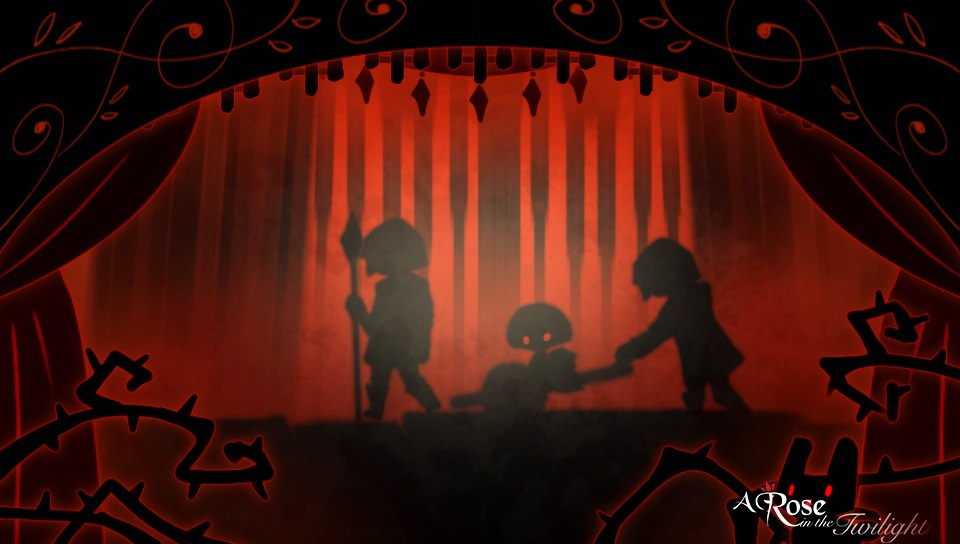 Death is a key theme in this game, and sometimes even necessary for progression. By absorbing the blood of the corpses that she comes across, known as Blood Memories, Rose is able to see fragments of their past – a past that seems to line up all too well from person-to-person. While it is possible to play through the main storyline without collecting all of the Blood Memories, their role in telling the game’s story is so central that I wouldn’t recommend skipping any of them. Oh, and speaking of death…

I can tell you right now that you’re going to die quite a bit in A Rose in the Twilight. After all, it’s a pretty tough game. But death isn’t just something that happens when you mess up a puzzle. It’s also an important, and terrifying, theme in the story, and nothing showcases this as well as the Execution Rooms. While it isn’t necessary to collect every single Blood Memory, certain doors will only allow you entrance after you’ve collected a set number of them – and offer just a bit more blood. Above each door in each Execution Room lies an execution device, and only by executing someone will that door open. 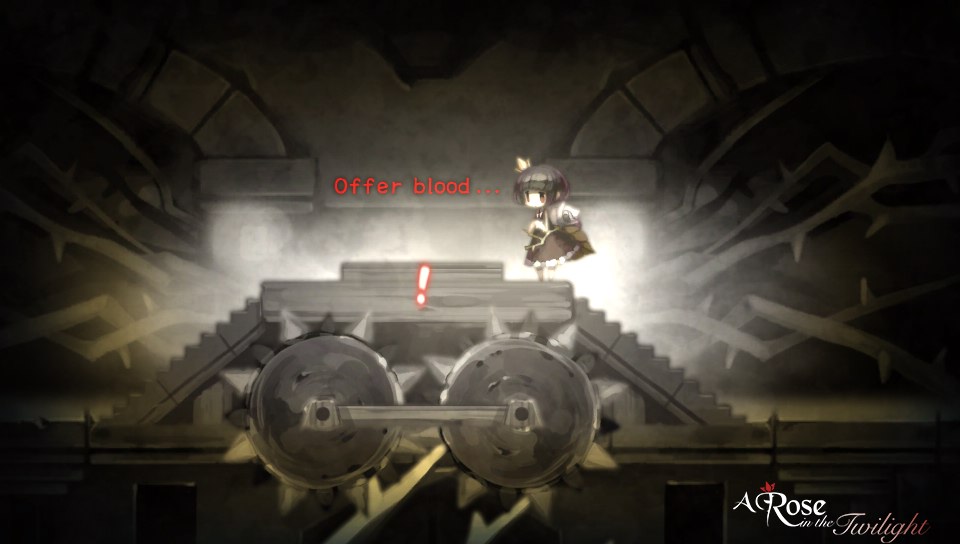 It never gets any easier.

Of course, since no one else is around, this means that Rose must sacrifice herself. Rose’s Curse of Thorns allows her to revive an infinite number of times, but that doesn’t mean that dying is easy. Rose can still feel pain, physically and emotionally, and appears to remember every time that she has died. Watching her bravely, yet fearfully, sacrifice herself over and over was absolutely heart-wrenching, and ultimately helped to drive into my mind just how scary her world was.

Anyway, enough of the heavy suff! Let’s move on to gameplay. A Rose in the Twilight is a puzzle platformer with a heavy emphasis on cooperation. In order to solve each puzzle and progress further into the castle, players must switch between and make use of the unique abilities that Rose and the giant possess. Rose’s Curse of Thorns gives her dominion over time and color, allowing her to absorb red (the only color left within the castle) from one object and transfer it to another. Only objects with color can move (anything colorless is literally frozen in time), so it’s important to know the pros and cons of giving life to something before actually doing it. The Curse of Thorns is the game’s most central gimmick and can take some time getting used to, but it’s a very solid one overall and was utilized quite well throughout the course of the game. 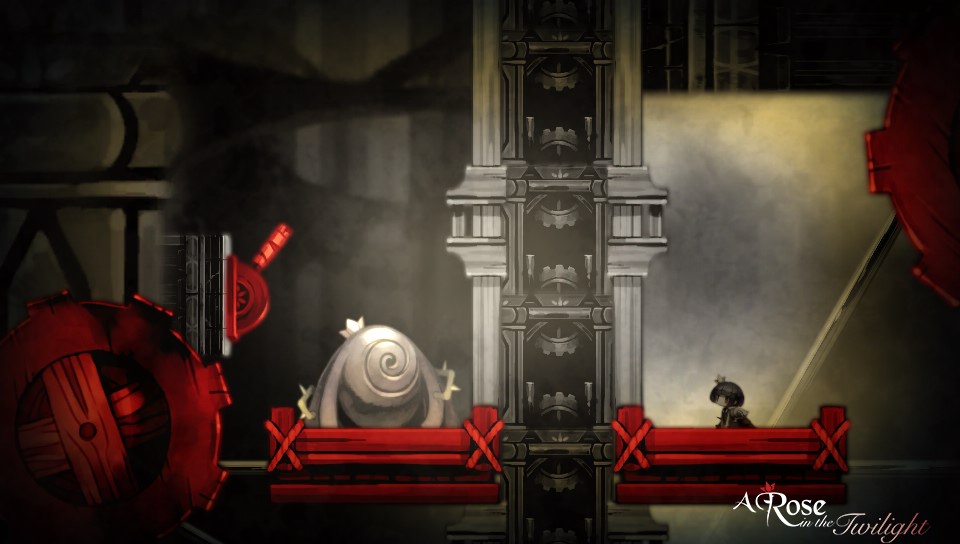 The giant’s ability is a bit more straightforward; it’s big, strong, and can’t be harmed. Players will need to make use of the giant in order to move objects around, navigate through dangerous thorn-covered pathways, and even help Rose get to otherwise-inaccessible areas by… well… throwing her as hard as he can. Although, bottomless pits aside, the imminent danger of death isn’t there with the giant, his role still requires just as much care. Not only do a lot of objects need to be moved or thrown with timing and precision, but you also need to make sure that Rose isn’t near anything dangerous – or that you don’t accidentally kill her.

A Rose in the Twilight also keeps gameplay fresh by adding in gimmicks. The castle is split up into several different areas, each containing a number of rooms (“worlds” and “levels”, if you will). Each new area throws something into the mix – such as the garden forcing Rose to use a watering can instead of her Curse of Thorns – that requires players to think just a little bit differently than they had before. It also helps that new gimmicks aren’t the central focus of each area. The cooperation between Rose and the giant and traditional usage of their abilities is still the core focus of gameplay – they’re just tweaked a bit here and there. 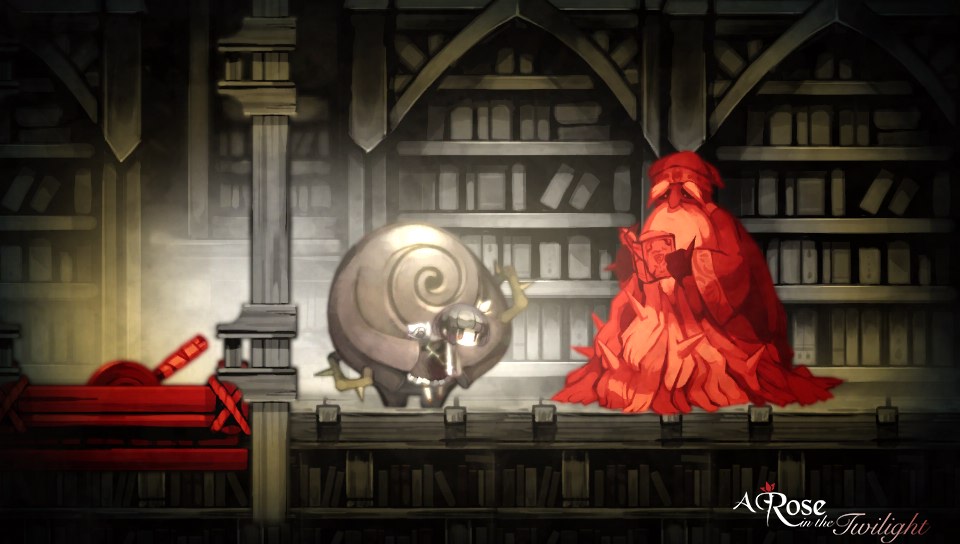 Be sure to learn the ins and outs of each area!

I have to give credit to how this game handled the dreaded learning curve. It isn’t difficult to make gameplay in a game such as this either too underwhelming or two overwhelming, but I never seemed to run into that issue throughout my entire playthrough of the game. Even with new gimmicks being thrown at me, pacing remained incredibly smooth and sat comfortably at what I would deem “just-challenging-enough” to pull in both puzzle game fanatics and puzzle newbies alike. There were a few rather obscure puzzles, but those were few and far between. I genuinely felt accomplished after completing each area, and who doesn’t like feeling that way?

This game was not without its downfalls, however. A Rose in the Twilight is short. Like, really short. Even if you have no idea what you’re doing at first, the entire game takes only a handful of hours to complete. I understand that not everything has to be super-long, and that there can even be beauty in short games, but I would be lying if I said that my experience didn’t leave me wanting more. Even factoring in the post-game content (which, amusingly, is about as important story-wise as the rest of the game) and the speedrun mode, there simply wasn’t enough to fully slake my thirst for gameplay. 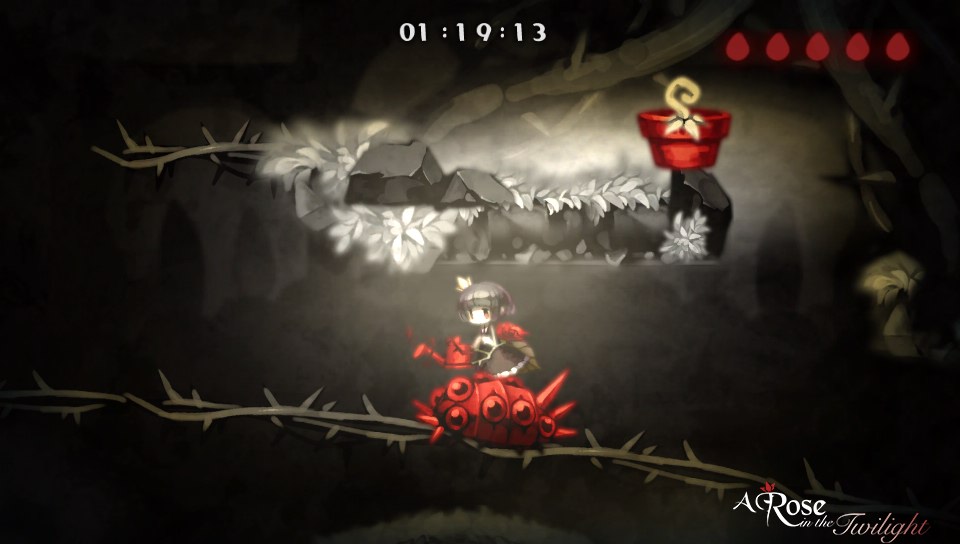 Artistically-speaking, things were pretty flawless. A Rose in the Twilight perfectly captured the creepy-yet-cute storybook style that it was going after – from the softly ominous castle and each of its equally-foreboding areas, to the way in which creatures and characters looked. Even the style in which the game was animated had a strange pop-up book-like quality to it that made it look less like traditional video game movement, and more like some hidden figure was moving paper cutouts of characters in the background. The thematic red/white contrast also provided emphasis on what was and was not important in area, and gently served as a guide should players become stuck on certain puzzles.

The audio deserves nothing but praise as well. Adopting a “less is more” stance, A Rose in the Twilight‘s OST is short, sweet, and highly ambient. Each area has its own theme that somehow manages to be dark and soothing at the same time, and I was certainly not opposed to cranking up the volume as I played through the game. Sound effects were also scarce, and generally limited to basic movement noises. The decision to favor minimalism definitely payed off.

Cute, scary, bloody, and smart – A Rose in the Twilight is a strange combination of things which somehow came together to form a very good game that, questionable length aside, provided for me an incredibly solid experience overall. There are plenty of reasons to play this game – the story, the puzzles, or even just the artwork – and I would highly recommend picking it up. Journeying through a dangerous castle with nothing but a walking rock for a friend and a rose stuck to your back may be a little scary, but that’s all part of the fun if you ask me.

Full Disclosure: This review is based on a copy of  A Rose in the Twilight given to Hey Poor Player by the Publisher.