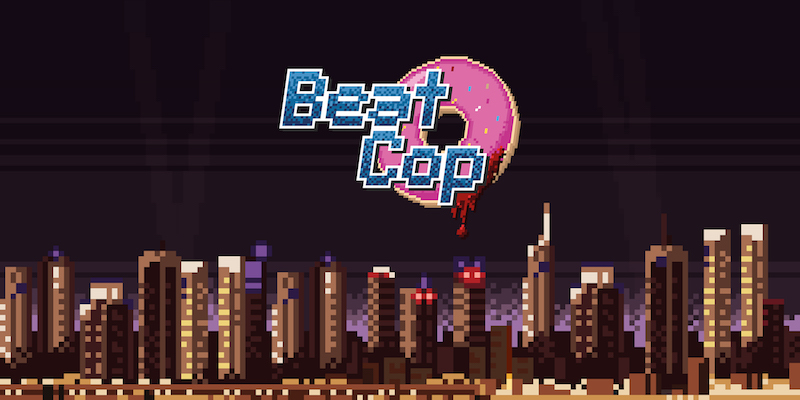 Beat Cop casts the player in the role of Jack Kelly, a flashy detective who gets busted down to walking a uniformed beat on the mean streets of 1980’s New York. Accused of stealing a Senator’s diamonds while busting up a break-in, Kelly has to somehow find a way to prove his innocence while busting his ass on the street. His life just gets even harder as the cop assigned to show him around on the first day is gunned down in a drive-by shooting (with the fatal bullets intended for Kelly). Kelly has to get to the bottom of the conspiracy against him while doing his new, unglamorous duties of ticketing cars and chasing after petty theives. It’s a unique set-up to be sure, but Beat Cop can stumble while chasing its neon dreams.

Reflecting the enormous burdens of a police officer, Beat Cop is all about managing your precious time. Every day, you’ve got a quota of tickets to write for different vehicular infractions, such as if someone has parked in a no-parking zone or is driving with knackered unsafe tires. You’ll have to correctly fill in tickets or your daily pay will be docked, but it takes time to do a thorough check of each car. However, there’s a little girl running up to you who’s lost her cat. Your radio is buzzing, telling you to cordon off the scene of a reported murder. Every day is a real struggle to keep up with all the developments on the street, and it’s up to you to portion your time to do everything. 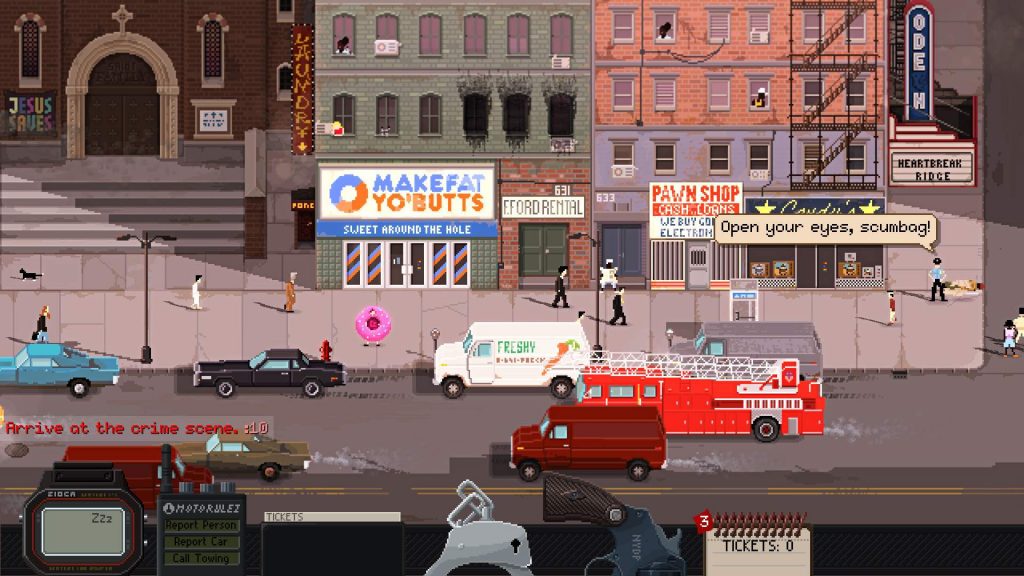 Keep your eyes open for scumbags. There’s plenty of them.

The time management aspect of Beat Cop is the nexus of its design, but it’s a mechanically very simple game. For example, you chase down fleeing perps by double clicking a spot on the ground near them, causing Kelly to break into a sprint. You then click on the cuffs in the UI screen to initiative a cartoonish dustball where Kelly tackles and shackles the criminal. Checking cars for vehicular infractions is just as straightforward. A simple click will have you checking for broken lights, scuffed tires or expired parking meters. After that it’s a mundane matter of clicking a few more times to fill out a ticket and call the tow truck. Occasionally, you’ll be accosted by the ticketed vehicle’s owner, who’ll plead with you or offer you a bribe to waive the ticket. The first few times this happened, it was a fun little choice for me over whether to play dirty cop or an incorruptible Serpico. After the twentieth time it had happened though, it became boringly routine.

There’s one nifty mini-game where you can search a car for contraband, where you’ve got a limited number of moves to shift bits of junk to find the contraband hidden underneath. What was frustrating for cool moments like this though is that I didn’t start encountering trickier versions of this puzzle later. Unlike Beat Cop’s bureaucracy-em-up forebear, Papers Please, where rifling through mountains of documents with rapidly changing regulations became punishingly tough at times, Beat Cop doesn’t scale in this way. The looming time limit to fit in everything during the day gives a bracing sense of urgency to the proceedings, but it can’t quite paper over how the gameplay is really just a mish-mash of simple mini-games. Though entertaining at first, their lack of growing complexity means they get old quickly. 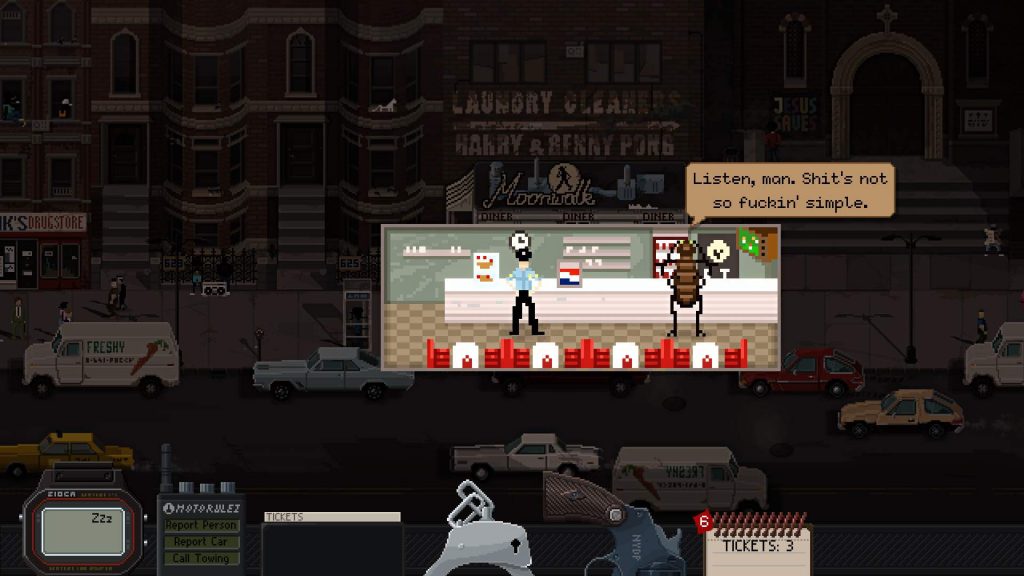 This giant cockroach has some wise words.

Beat Cop isn’t just about doing your duty as a cop, and saving your ass from getting canned – it’s also about keeping your head above water financially and staying on the right side of the various factions on the street. There’s the everyday citizens – who you can help out of by protecting the ethnically diverse shop-owners from thieves or letting the odd ticket slide. There’s also the Mafia – who you can do various favours for via a pizzeria, where a suited goombah will give you innuendo-laden tasks, such as asking you to “take care” of rival drug dealers by having their truck towed. Then there’s the “Crew”, who might ask you to look the other way when they’re dealing smack on the corner . You’ll be rewarded with bribes and quid-pro-quo favours from those you help. A little extra off-the-books cash certainly helps when you’ve got alimony payments to your ex-wife looming. Of course, if you’re too much of a dirty cop and stain the badge you’ll get in trouble with your terrifying battle axe of a Sergeant.

Beat Cop has some welcome UI improvements from the preview version I looked at last year, and this is what makes juggling your various commitments much easier. Every day your wages and your reputation change with the various factions will be conveniently tallied up on a notepad. Sadly there are still some nagging bugs in Beat Cop which stifle the experience. At times dialogue failed to finish, leaving the game effectively frozen. Other times the end-of-day report won’t tally your reputation correctly. The finished product of Beat Cop still has a proverbial broken tail light or two. 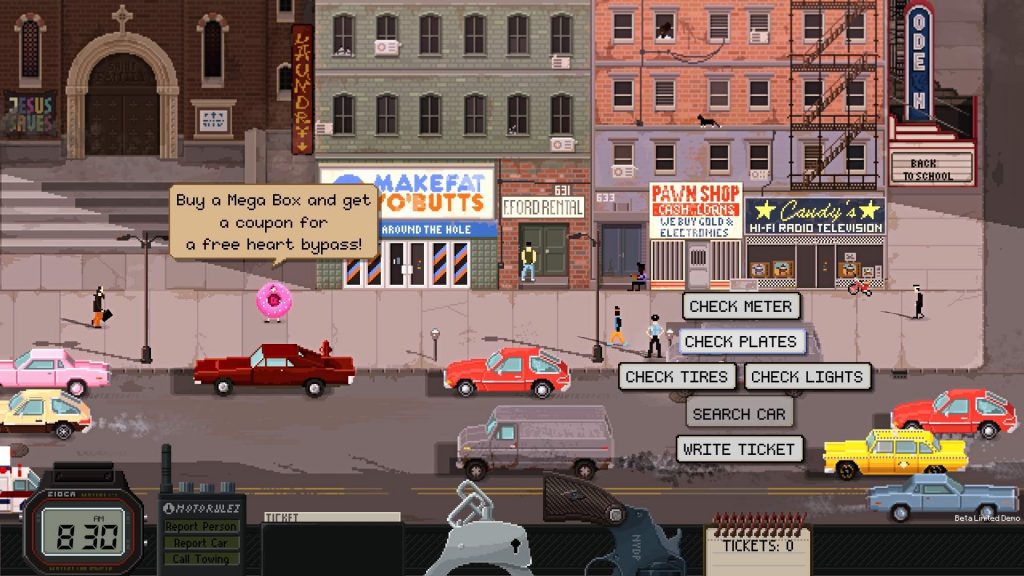 Checking for vehicular infractions is the most fundamental part of Beat Cop.

Beat Cop is a stylistic evolution of Hotline Miami, with its pounding synthwave soundtrack and pixel-art graphics. I liked the vibrant streets you patrol, with neat little details like people smoking, b-boys breakdancing to their boombox and birds swooping overhead to dive-bomb passers by with excrement. Hard rock and electro blares from passing cars before fading. Every shop you enter has its own unique sounds, from scattered sports announcements in the bar to jaunty folk music in Ivan’s Liquor store. Beat Cop does a good job of immersing you in its time and place. Of course, a funky soundtrack and a pleasantly clean, sharp pixel-art style do not alone a masterpiece make (I’m looking at you Party Hard).

The writing in Beat Cop tends be fairly glib and juvenile. The developers even put up a little disclaimer saying that the game is “not a document of 80s New York” but rather a loving tribute to the cop shows of the era. Sometimes the lines are sharp and the jokes do land. I’ll admit I loved some of the authentic jibes between the cops during each morning roll call – which are as blue as the uniforms. Likewise, another scene where Kelly gets high on pesticide and hallucinates a surprisingly verbose giant cockroach made me chuckle. 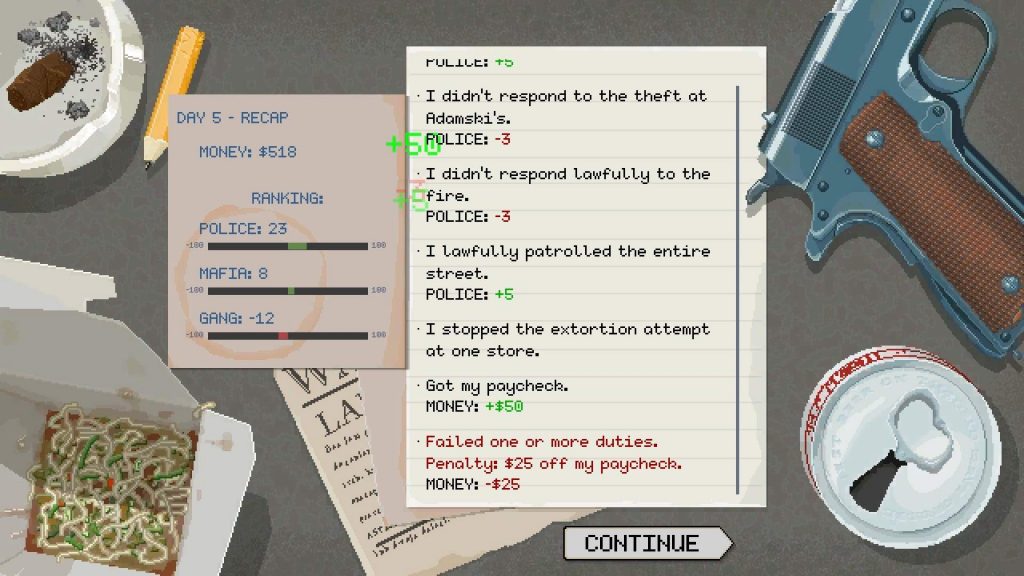 Tallying up your progress at the end of a long day with some beer and Chinese takeout.

Sadly, the relentless focus on black humour underlines the limitations and unambitiousness of Beat Cop. What robs Beat Cop of a lot of its potential power is how it never takes itself seriously or delves deeply enough into its subject matter. There’s the gloss of the racial tensions and police corruption, but these issues are never meaningfully explored beyond being gameplay props.

Some of the potentially powerful moments are wasted as they’re played for cheap laughs and forgotten about. I found myself frustrated early on at not being able to call in a savage beating, as Kelly worries it would ruin his career. It’s part of a punishingly unfunny storyline where Kelly is babysitting a corrupt Russian cop on an exchange program. Imagine the movie Borat, except with less self-awareness, and more exaggerated East European sterotypes. There’s even a baffling attempt at a Black Lives Matter joke. To say Beat Cop’s writing is inconsistent in quality would be an understatement.

You’ll never really get into any deeply profound moral dilemmas, and the simple binary choices you’re occasionally offered are seldom more than practical ones. Most of the side stories are simple tasks to raise the meter of whichever of the Mafia/Crew/Police factions you’re looking to impress.

I just found the developers’ desire that no-one take their game too seriously a bit of a cop-out (pun intended). Some of the great cop shows of the eighties managed to be funny while having complex characters and a meaningful exploration of the boys in blue. If you want something that gives the real challenges of policework a bit more weight then it might be worth checking out This is the Police.

Beat Cop is a serviceable bureaucracy-em-up with an interesting concept. However, its rote procession of ticket-giving and perp-chasing – combined with the shallowness of its side stories – can get repetitive and leave you feeling unsatisfied. Ultimately, Beat Cop is like the sugary donut emblazoned as its logo. It’s got a sugary taste in the first bite, but it’s not substantial enough to substitute for a good meal.

Full disclosure: This review is based on review copy provided to Hey Poor Player by the publisher