Are you not entertained?

Remember that show Spartacus: Blood And Sand? For the uninitiated, it was an R-rated sex-and-death-athon telling the story of the titular gladiator’s rebellion against the Roman empire. I’ll admit, the show was totally a guilty pleasure. It mixed political scheming (and John Hannah chewing all the scenery) with decapitation and a healthy mix of full-frontal nudity on both sides of the gender spectrum. As it turns out, Domina is probably the closest we’ll ever get to a proper Spartacus: Blood And Sand video-game. While the nudity might be restricted by the detail limits of the colorful and nicely realized pixel-art, the abundance of red and yellow (blood and sand), certainly positions us where we need to be.

At its core, Domina is a simulator game. This means you’ll be managing time, resources and various other assets by taking risks and leveraging the importance of one thing against another. The set-up here is that you’re the Domina of a once-great ludus (basically a villa where gladiators are trained). With a time limit of one year (about three hours in game), your main objective is to compete in enough high-profile contests to be invited to the final championship, where glory awaits. 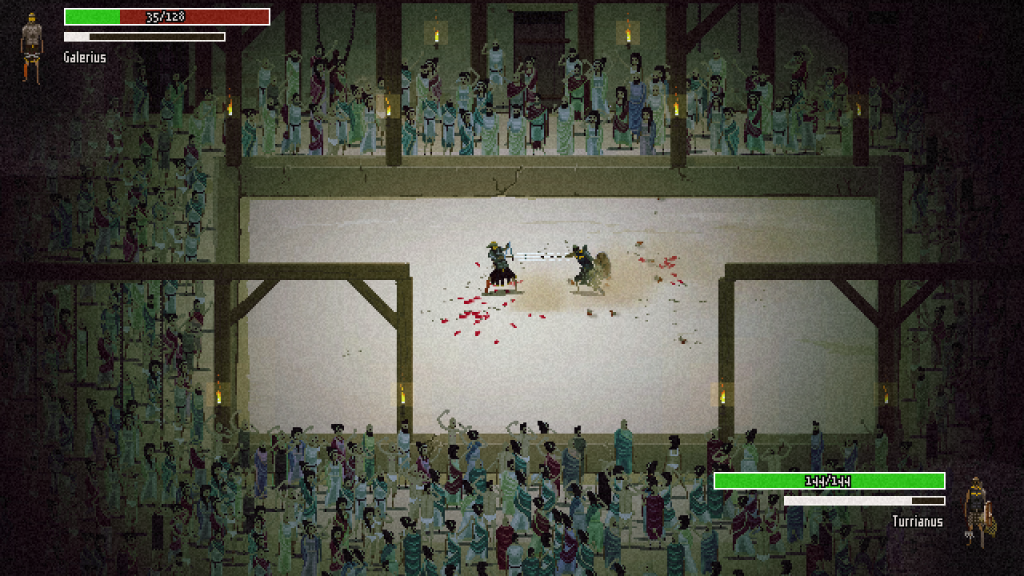 At the game’s opening, you’re introduced to a Legate and a Magistrate. These figures inhabit your ludus, act as patrons to some of your gladiators and organize the gladiatorial battles you’ll take part in. Each of them has a ‘favor’ meter, which influences the kind of match-ups the game will generate (all randomly through an algorithm). Over the course of your playthrough, situations will arise that usually involve you choosing which of the two to help or hinder.  The random-generator gameplay results in pretty unique scenarios with each new campaign. The same choice in a scenarios across two different playthroughs can result in entirely different consequences. For example, on my first playthrough, I allowed the Magistrate’s son to visit the ludus. The boy had fun and I gained morale for my gladiators and favor from the Magistrate. A couple of playthroughs later however, and the same situation resulted in one of gladiators killing the boy, losing me favor and resulting in the execution of a good fighter.

That brings us nicely onto the ‘stock’ themselves. You begin the game with three slaves, all low level. Each has base stats that are unique to them, including Aggro, Turtle (ability to utilize armor), Evasion and Stamina. With three classes of gladiator available, it’s up to you to figure out where to prioritize and what classes work best with these base stats. Over time you’ll use your Doctore (basically a fighting instructor) to progress through a skill-tree allowing new moves and various buffs to defense and attack. The battles themselves are bloody and incredibly brief. You are given the choice over whether to control a single gladiator, or leave the AI to take charge in your stead. In my playthroughs I tried going full AI and then full manual. While the combat itself is tense and dynamic, its actual mechanics are difficult to pin down and the lack of a single-match or practice mode often means experimentation will cost you your best gladiator which in turn often makes the game impossible to complete. 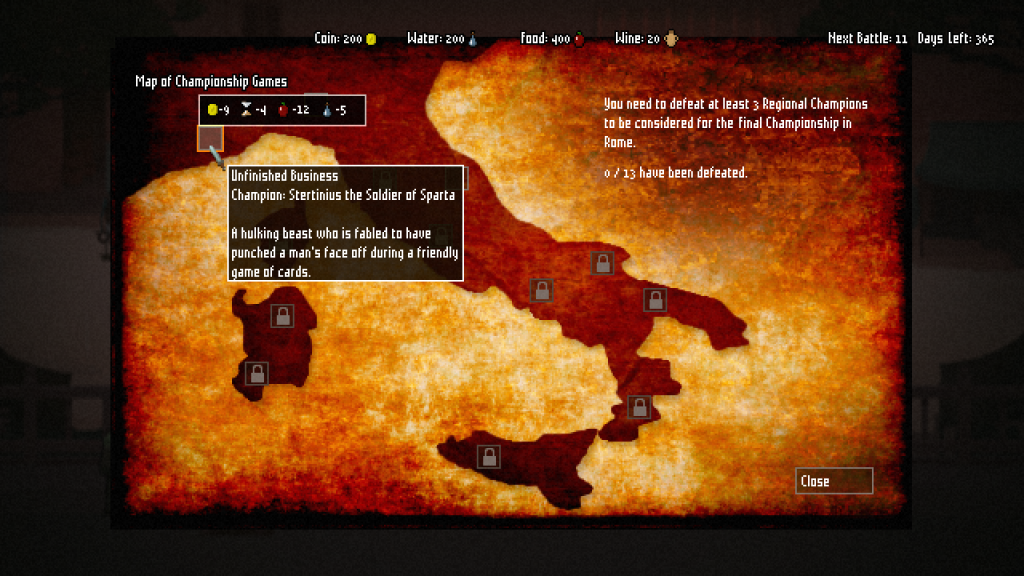 Herein lies one of Domina’s biggest issues – balance. Often the requirements for a successful fight are having gladiators who are significantly higher level than their opponent. The fight frequency means that if you want to get a gladiator to the required level you need to give most of your fights to them. The result of this is that you end up with steady slow training progress from one set of gladiators and one who is far superior. Should you lose your prize fighter, you’re suddenly matched up against fighters who are on par with his level and you only have your mid-level gladiators left to battle. A few loses in a row and the entire campaign will collapse, with recovery from big loses usually providing insurmountable. This would be somewhat remedied by a save system but no such system is present here. From a design perspective it is justifiable in so far as it would detract from the tension and challenge, as well as interfering with the surprises that come with the rogue-like events and match-ups. However, the fact that the game requires a continuous time investment of around three hours detracts somewhat from the, at times, contemplative pace required of a management/simulation game.

The game feels like it’s designed to be played a very high tempo and the result is a feeling of being rushed. Before you know it you’ll be at the stage where the grand championship is looming. You could have 50+ days left but be in a position where being ready to enter is impossible, making the fights leading up the end feeling low in stakes. It’s disappointing to see such a great concept and blueprint shorthanded by balance and design choices that, while aimed at being ‘hardcore’, can feel end feeling obtuse.

From an audio-visual standpoint, Domina is super-focused and on-point. It looks and sounds great and there’s a nicely pitched sense of humor that comes from the grotesque characters. It’s also worth noting that Domina is in a continued stage of progression and developer Dolphin Farm are frequently updating the build (currently in version 1.0.9). There are some real strengths here and Domina has a ton of potential. With some UI refinements (cycling between your roster can be laborious in the current state), rebalances and expansions (customization/stat changing equipment would help to create unique and memorable gladiators), Domina could really shine. Domina is a great concept, still working its way towards satisfying execution. It gets a recommendation from me with the caveat that enjoying it requirements a great deal of patience. It is absolutely a game I will come back to in the next month or so to see if delivers on its initial promise.

Full disclosure: This review is based on a copy of Domina given to HeyPoorPlayer by the publisher.