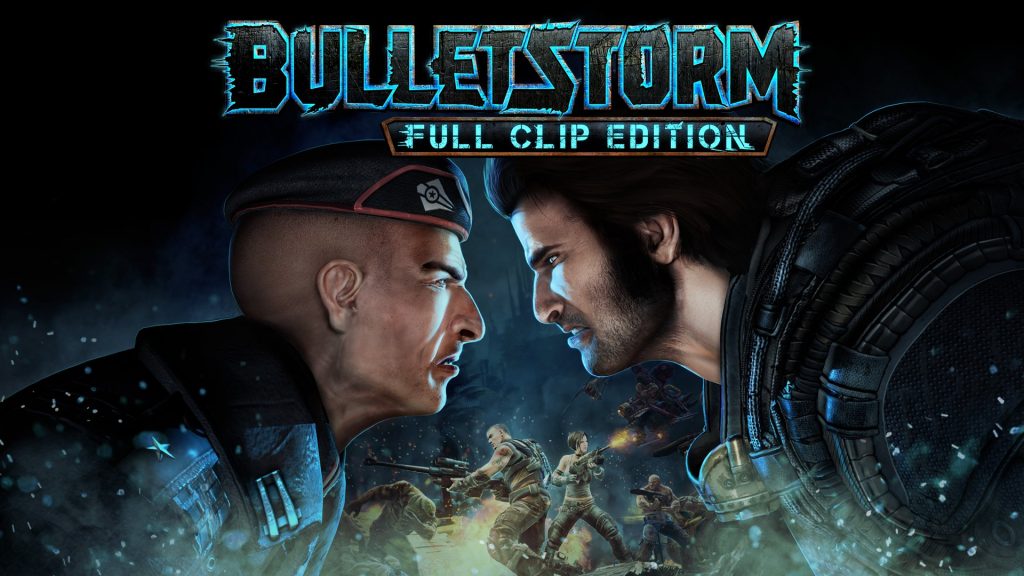 When Bulletstorm was first released to consoles and PC back in 2011, I passed it up. After glancing over the screenshots, I wrote it off as just another Gears of War clone due to the gruff nature of the protagonist and the overall look of the war-torn environments. Now, having played through the new Full Clip Edition, I’m kinda embarrassed that I wrote it off as easily as I did. From the introduction to the credits, Bulletstorm is a heart-pounding shooter that can best be described as one of the most intense action movies that I’ve ever played. Strap yourself in, because this is one hell of a ride.

Before even starting the game, Bulletstorm will ask the player if they’re comfortable with extremely foul language and buckets full of blood & guts. The game does not hold back one bit. Each and every character throws out dick jokes like candy and the dialogue gets more graphic as the game goes on. At first I thought the humor was fitting and even chuckled a few times, but it wears out its welcome about half way through the experience. I had to roll my eyes a few times because the raunchy humor felt too forced, especially when the main antagonist tosses out insults. Bulletstorm definitely wears its M rating proudly on its sleeve, and delivers blood and explicit language by the truckloads.

Bulletstorm: Full Clip Edition’s story is there just to give the player a reason to shoot dudes in their faces. It’s not going to captivate you, but what is here will make you care for some of the characters toward the end of the journey. You play the role of Grayson Hunt, the leader of a black ops team called Dead Echo. The team is ordered to kill a target, which they do, but realize pretty quickly that something seems fishy about the orders they had been given. Upon investigation, they uncover that their superior, Star General Serrano, had tricked Dead Echo into murdering a civilian. This angers Dead Echo and they decide to break free from General Serrano. Several years pass and Dead Echo has been able to slip under the General’s radar; that is until one night where they run across his battlecruiser. In a druken stupor, Grayson decides to ram the cruiser causing both ships to crash land on a nearby planet. Now it’s up to Grayson, and his partner Ishi, to survive and find a way to get back to space. The only problem is that the planet is full of General Serrano’s crew, deadly tribes, and carnivorous plant life. 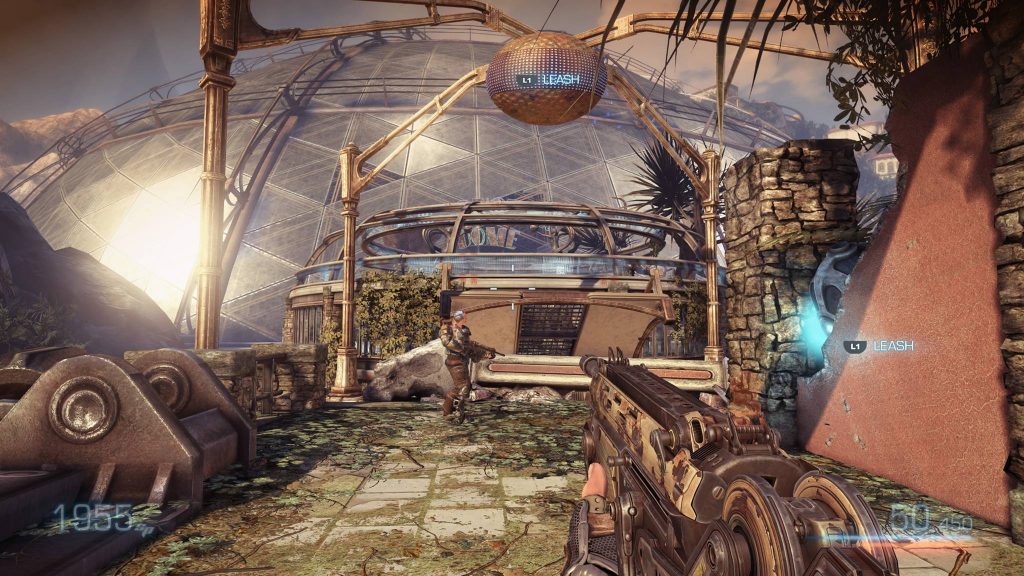 Grayson and Ishi are your typical military grunts at the beginning of the game. Armed with standard issue rifles, both of them can hold their own, but early on in the story the game’s main gimmick will show you that this isn’t an ordinary shooter. Grayson will acquire an energy leash that attaches like a glove on his left hand, and this leash will grant Grayson the ability to attach to enemies and pull them toward him for closer combat. The leash can also be used to pull down pieces of the environment that must be cleared in order to access different areas of the map.   The energy leash can be upgraded early on in the campaign to include a ground pound like charge shot that will launch enemies into the air and put them in a slow motion-like state. During their slow decent back to the ground it’s recommended to unload as many bullets into them as possible. The leash is a tool that you’ll learn to master more and more every time you utilize it.

Additionally, Grayson can acquire several types of guns to make taking out the enemy a bit easier. Like the energy leash, these guns all have one upgrade that usually consists of dealing extra damage when fired. These upgrades can be upgraded to include even more damage, or better yet, the ability to shoot through multiple enemies at once. My favorite moments in the game revolved around the upgraded sniper rifle. When firing an upgraded sniper rifle’s charge shot the player is given the ability to make the bullet explode before contact or they can wait until the bullet is in the enemy to unleash a bloody explosion. Once the bullet has penetrated the enemy the player is given control of what direction the body flies, and once it’s in a desirable position (usually around a pack of enemies) they can make the bullet explode. Seeing all of the enemies try to get away from the corpse was exhilarating, and making the body explode was extremely satisfying.

Upgrading all of these weapons comes at a cost though. Drop kits are spread throughout the planet and can be accessed using the energy leash. The currency needed to upgrade equipment is built into a point system that Grayson can build up by way of dispatching enemies. Dispatching an enemy normally, by way of just shooting them until they are dead, will grant Grayson a minimal amount of points. But killing enemies creatively will reward a greater amount of points, making the player think before just pulling the trigger. For example, pulling an enemy toward you and then kicking him into some nearby sharp object will impale him and reward you some extra currency. I loved this aspect of the game but what really made things open up was when the combo system came into play. Predetermined combos called “skillshots” can be strung together to give you the maximum amount of currency to put toward some much-needed upgrades. The list of skillshots can be accessed via drop kit and really pushed me to pull off some amazing combos that I otherwise might not have even thought of. 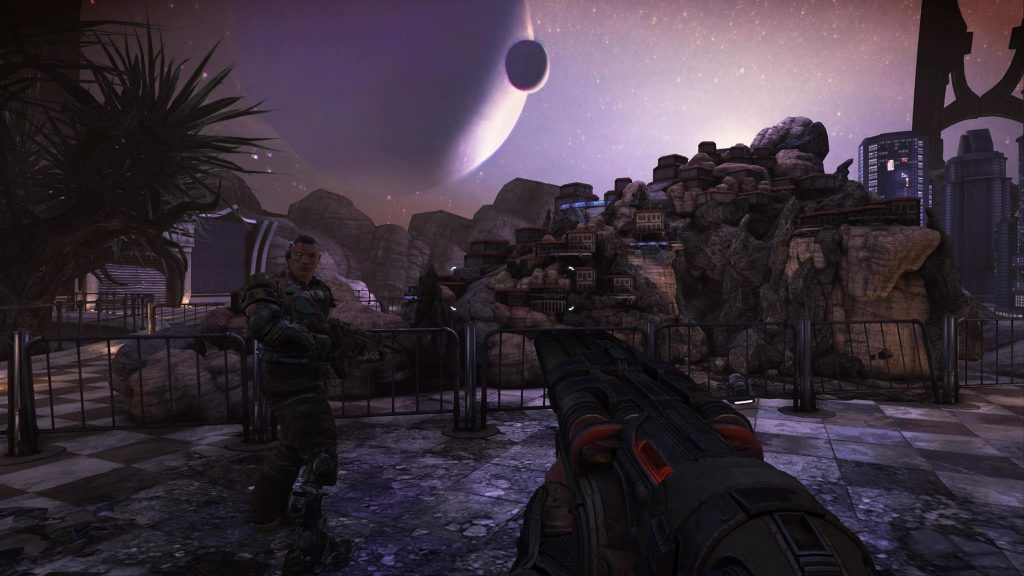 Are you ready to shoot mutants in their faces?

Bulletstorm: Full Clip Edition’s environments look gorgeous.  You’ll be traversing mountains, futuristic buildings, and eventually space warships. Again, I didn’t play the original Bulletstorm, but what is presented here is breathtaking. The city in particular, although war-torn, looks beautiful. Destroyed skyscrapers and dilapidated city streets offer several environmental hazards that beg to be used for slaughtering enemies. While the environments look amazing, the player models, on the other hand, seem like they haven’t received as much attention. They don’t look bad, mind you, just funny in a way. The main issues seem to stem from characters mouth movements, especially while talking. The sync is off and the lip animation makes the characters puppet-like in nature. This isn’t game breaking, but I think it’s something that most gamers will chuckle at.

You’ll learn very quickly that Grayson loves to kill. Lucky for him, the dangerous planet that he’s found himself on is full of baddies that are just begging to be slaughtered. Dispatching several of these enemies at a time will cause this game to chug with frame rate dips that felt like single digits in some cases. These dips in frames would come in random places, some even in cutscenes that didn’t have much going on in the way of action. The frame rate issues didn’t cause me any kind of unwarranted deaths but it’s something that I felt needed to be addressed. It’s worth noting that I encountered these issues while playing on a PS4 Pro. 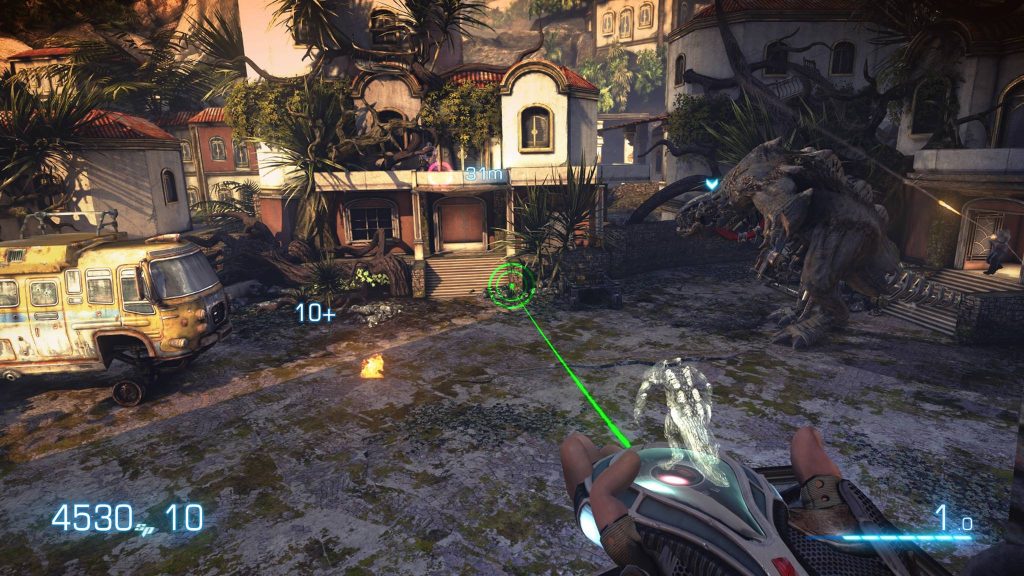 See that big monster over there? Yep, you get to control him!

While the graphical hiccups may turn off a few people, I can happily say the sound of Bulletstorm: Full Clip Edition does not pull any punches. This is a war game after all so playing on a surround sound system or a good set of headphones is a must.  Delivering a ground pound with the leash will put your subwoofer to the test as will the destruction of the many buildings that you’ll bring down. The good ol’ “red barrels” are spread throughout the game in full force so expect to shoot them and rattle the room a bit. Not to take a back seat to the explosions, the voice acting heightens the quality of the sound design. Yes the jokes get old, but the delivery is always on point and the gruff voices of each character fit really well. I think the audio throughout the game is amazing and some of the best sound design I’ve heard in a while. 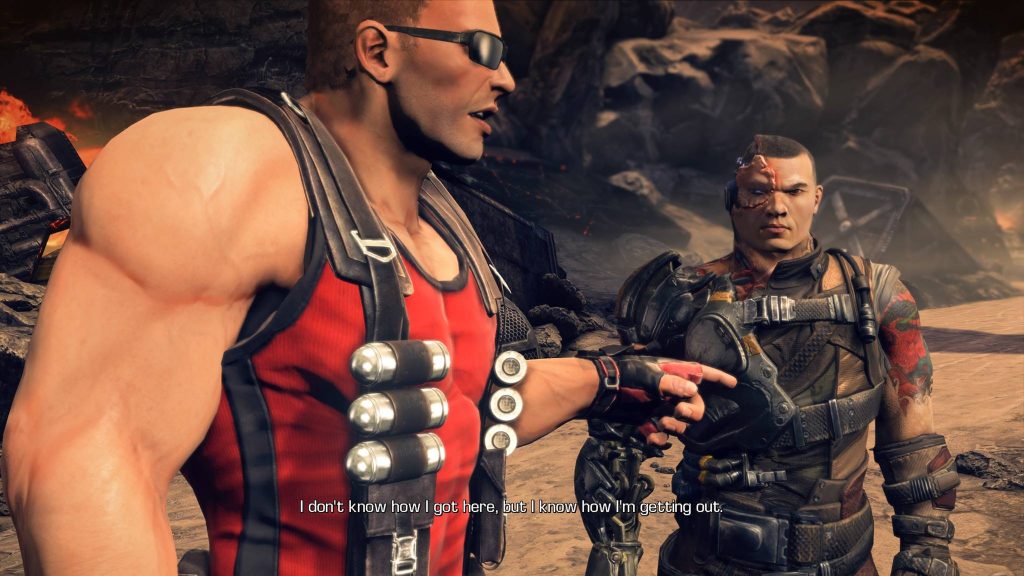 It’s time to kick ass and chew bubble…ah, you know the line.

Bulletstorm: Full Clip Edition hosts a few other upgrades other than improved graphics. Upon completing the campaign the player can start a new game titled “Overkill Mode” where all of the game’s weapons will be unlocked from the start of the campaign. To add a little extra incentive, if a player were to complete all skillshots of a particular weapon, unlimited ammo will be unlocked for that weapon. Also included in the Full Clip Edition (if you’ve pre-ordered the game, anyway) is an additional tour labeled “Duke Nukem’s Bulletstorm Tour”. This extra campaign replaces Grayson with Duke Nukem, and a ton of new dialogue featuring Jon St. John himself has been added. This extra content was available in my review copy but the lip-sync was severely off. Gearbox and People Can Fly have issued a statement regarding the issue and are working on a patch that will be available shortly after launch. Once this patch is released I think fans of Duke will be extremely happy with the care and love shown towards Duke’s player model and voice work. Duke practically fits in Bulletstorm’s world like a glove!

I can’t recommend Bulletstorm: Full Clip Edition enough. I’m not sure if this is a game you would go back to if you’ve already played it back in 2011, but I can see myself firing up The Full Clip Edition every now and again. The action is heavy and satisfying, the dick jokes are aplenty, and the reward system had me running from one battle to the next to discover how creative I could be. I wish I didn’t pass this up in 2011 because I really feel that I missed out on something special. I’m anxiously waiting for the online multiplayer to open up since as of this writing I couldn’t find any matches. If Bulletstorm flew under your radar before, don’t let it happen again.

Full disclosure: This review is based on a PS4 review copy of Bulletstorm: Full Clip Edition given to HeyPoorPlayer by the publisher.