Spike Chunsoft’s Danganronpa series certainly isn’t for the faint of heart. Originally released on the PSP and Vita, the first two games – Dangonronpa: Trigger Happy Havoc and Danganronpa 2: Goodbye Despair – tell the story of two groups of hapless high school students who’ve been trapped in makeshift prisons and forced to murder their way to freedom. One part Hunger Games and one part Ace Attorney, they put a premium on ghastly murders, point-and-click sleuthing, and over-the-top courtroom drama. Now Spike Chunsoft has brought these first two games in the series to the PlayStation 4 with Danganronpa 1-2 Reload, allowing newcomers to experience the games that started it all ahead of the release of Danganronpa V3: Killing Harmony later this year.

And if you happened to miss out on these gems when they first released, now is the perfect time to check them out. Danganronpa 1-2 Reload is a delightfully macabre collection of adventures that revels in its absurdity while keeping you glued to its twisted narrative.

The premise behind these games is certainly an interesting one. A small group of high school students, known as “Ultimates” due to their skills in various areas, are accepted to, then promptly trapped in the exclusive Hope’s Peak Academy by a sadistic stuffed bear named Monokuma. Escape is not an option. With blast doors and heavy steel plates blocking every visible escape route, the only way to go free and return to the outside world is to kill one of your classmates in order to graduate. Of course, there’s a catch: After each killing, the murderer becomes “blackened”, and the students have to uncover the true culprit’s identity in a class trial. If they can discover who the murderer is, only the guilty party is executed. However, if they pin the blame on the wrong student then only the blackened graduates, and everyone else bites the big one.

The gameplay of Danganronpa 1-2 reload is split between three different mechanics, with the majority of the game being dedicated to visual novel-style storytelling. It’s here that much of the story unfolds as you explore the world around you and mingle with your fellow students-turned-prisoners. The writing in each game is incredibly engaging, and will keep you clutching your controller for the duration of each 20-hour adventure. That is, so long as you’re not put off by a wealth of dialog. As a visual novel, you’ll be spending plenty of time coming through mountains of text. Of course, a visual novel is only as good as its characters. And let me tell you, the students of Hope’s Peak Academy are certainly a motley crew. Monolithic martial artists, biker gang leaders, yakuza bosses, and certified psychopaths are just a small sample of types you’ll be spending time with. And they’re all brought to life with exceptional writing and engaging backstories. 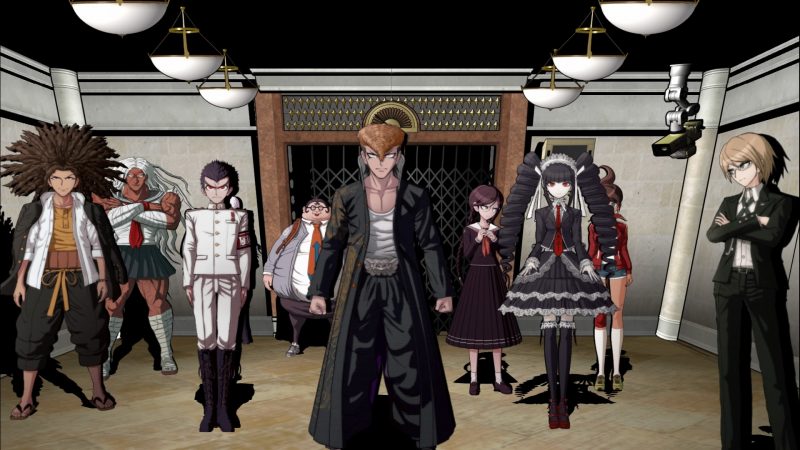 Danganronpa’s large and diverse cast of characters is one of its strongest qualities.

Much like the Social Link system found in Atlus’ Persona games, you can spend your free time getting to know each of these characters better – permitting they haven’t been killed off yet. By spending time with your classmates and giving them gifts that cater to their personalities, you’ll receive bonus skills. These special, character-specific abilities can be used to give you an edge during the upcoming class trial. In addition to making you more formidable in the courtroom, these outings also do a good job of expanding the narrative by offering a window into each character’s motivations.

When you’re not rubbing elbows with the misfits of Hope’s academy, you’ll likely be cramming said elbow deep in their guts trying to discover how they died. As I said before in this review, each chapter is centered around a different murder case. And after a student is killed, you’ll have to scour the crime scene in search of clues to how they met their messy fate. Conducting your investigation is done through a simple and efficient point-and-click interface. As you examine each bloody scene, you’ll uncover clues as to how each murder was conducted. These clues are then logged as “Truth Bullets”, which can be used to help make your case at the Class Trial. After you’ve uncovered all of the Truth Bullets for a particular murder, the investigation period will come to an end and the class trial will begin.

Without question, Class Trials are where Danganronpa really shines. While these courtroom showdowns are similar at first glance to those in the aforementioned Ace Attorney games, there are some key differences that make them stand out from their inspiration. Each trial is comprised of a variety of mini-games, each with their own mechanics that must be mastered to make a compelling case against your suspect. You’ll most frequently have target flaws in your classmate’s arguments with a floating cross-hair and blast them with the Truth Bullet that refutes their claim. Other times you’ll need to highlight contradictions in a statement in order to highlight a logical fallacy and then present evidence to bolster your claim. 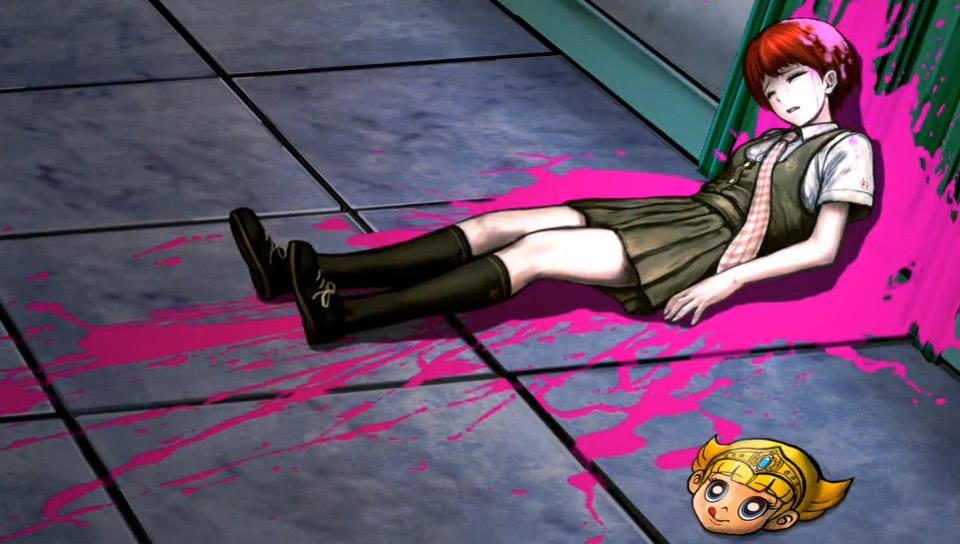 Death is always just around the corner in Danganronpa 1-2 Reload.

Things get more complicated as a case progresses, and you’ll eventually need to use multiple truth bullets at once to make your argument, or even shoot down scrolling static with special ammunition to get rid of static that can get in the way of your targets. When making your closing argument you’ll need to assemble a multi-page graphic novel using the various Truth Bullets you’ve discovered. And while this sounds cool in concept, it can occasionally be a frustrating experience. This is due in a large part to the rather chaotic way these comic strips are drawn, which can make certain frames appear to lack any real context. Thankfully, if you fail a trial you can always resume from where you left off, which makes death a minor setback.

Danganronpa: Trigger Happy Havoc is a great game in its own right thank to its strong writing and excellent characters. However, it’s just one half of Danranronpa 1-2 Reload‘s package. The sequel makes a strong case for itself by adding a number of tweaks to the original’s formula. Goodbye Despair adds new features to the mix, like Rebuttal Showdowns and Logic Dives. Rebuttal Showdowns trade Truth Bullets for blades as you slash away your opponent’s argument to gain the upper hand in a debate. While this doesn’t seem like a huge departure from the fundamentals of its predecessor, Logic Dives are another story. These have you careening through a wire-frame tunnel on a snowboard as you dodge obstacles and steer the course of a line of questions. It’s a bit like a dialog-focused version of the arcade hit Tempest, and it works surprisingly well.

These tweaks to Danganronpa’s already sturdy foundation are welcome ones that bring even more depth to the courtroom chaos. Goodbye Despair also features a much more interesting setting than the classrooms and corridors of Hopes Peak found in the original game. While the game begins in that iconic academy, at the very outset of the game the new gang of plucky Ultimates is plopped onto the mysterious Jabberwock Island. A tropical paradise, the island features a wide array of settings, such as nightclubs, factories, farms, and airports. The more ambitious location design makes Goodbye Despair’s tropical prison a much more interesting place to explore.

While Danganronpa 2: Goodbye Despair’s production values are largely improved over the original game, it is a bit sad disappointing that a number of audio assets including voice samples have been recycled. Still, that’s a minor gripe that’s easy to overlook when you consider just how much of an evolution over Trigger Happy Havoc.

Danganronpa 1-2 Reload is a fantastic collection, but it might not be for everyone. Those not particularly fond of visual novels may be turned off by the abundance of text you have to sift through. Likewise, it’s easy to imagine the occasionally plodding pacing of both titles getting under the skin of more impatient players. And if you already own the games on the PSP or Vita, you likely won’t find much of a reason to play through them all over again on the PS4. Still, if none of these caveats apply to you, you’ll find an awful lot of bloody good fun tucked into this package: especially if you already have a soft spot for Zero Escape or Ace Attorney games. Danganronpa 1-2 Reload unloads two full clips of murder mystery mayhem into the PS4 that no fan of the genre will want to miss.

Full disclosure: This review is based on a review copy of Danganronpa 1-2 Reload given to HeyPoorPlayer by the publisher.