Lift the curse, slap a witch. 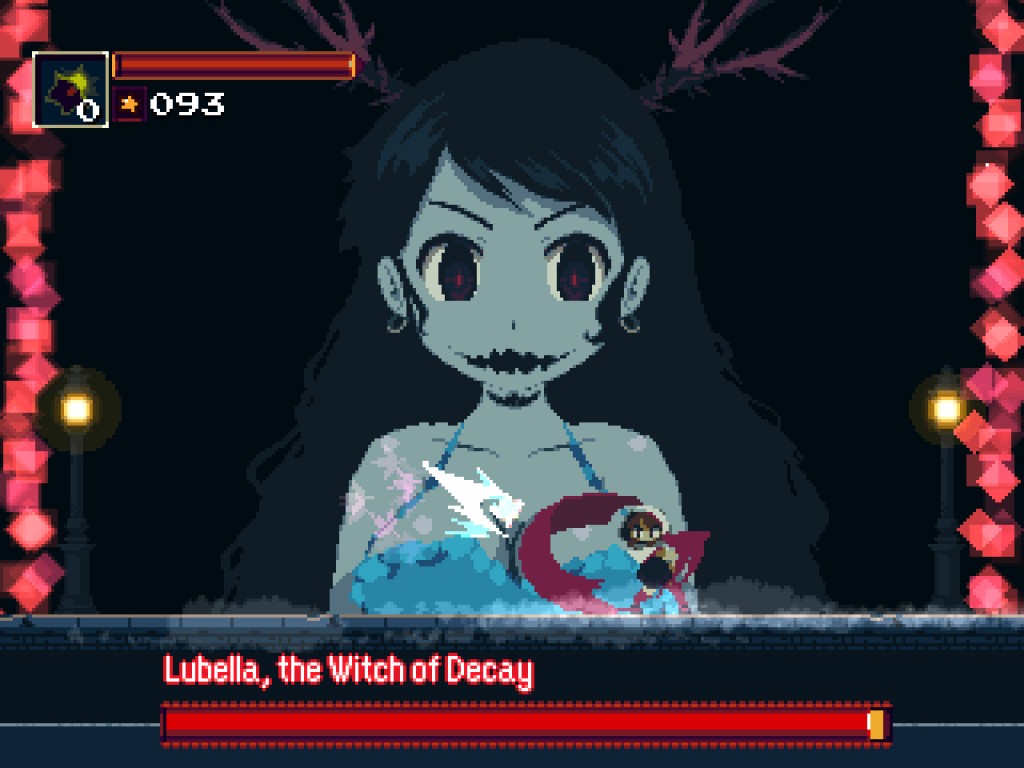 You hit her in the boobs….

Momodora: Reverie Under the Moonlight is an astounding piece of art that manages to use crisp gameplay mechanics and amazing visuals to tell a simple plot with finesse. Though it’s early in 2017, Momodora stands out as an amazing title even in a year with so many good games coming out. I’m not even going to try to be subtle – this game is great. I recently helped one of my colleagues write an article and video about one of my favorite games: Castlevania Symphony of the Night. In that article I talk about the many problems with that game in particular, and the potential problems of metroidvania style of games. Thankfully Momodora deftly leaps over every one of those possible pitfalls and comes out on top.

I’m of the sound mind that a simple plot isn’t necessarily a bad thing; there is legitimate brilliance in something simple with proper execution. Momodora is that type of game, where the plot is given enough to be engaging, but subtle enough that gameplay and visuals are at the forefront. You play as Kaho, a priestess who is on a quest to lift a curse from kingdom that is now spreading across the land. You must find the source of the curse and destroy it, all while exploring, fighting, and platforming across a gorgeous pixel art world. The story doesn’t get any more complicated than that, and that’s not bad. Just because it is iterative doesn’t mean that there aren’t genuinely cool moments when story beats do happen. The gameplay and visuals are the real show stopper here. What is most important is how the game balances metroidvania type of exploration with a solid combat system. 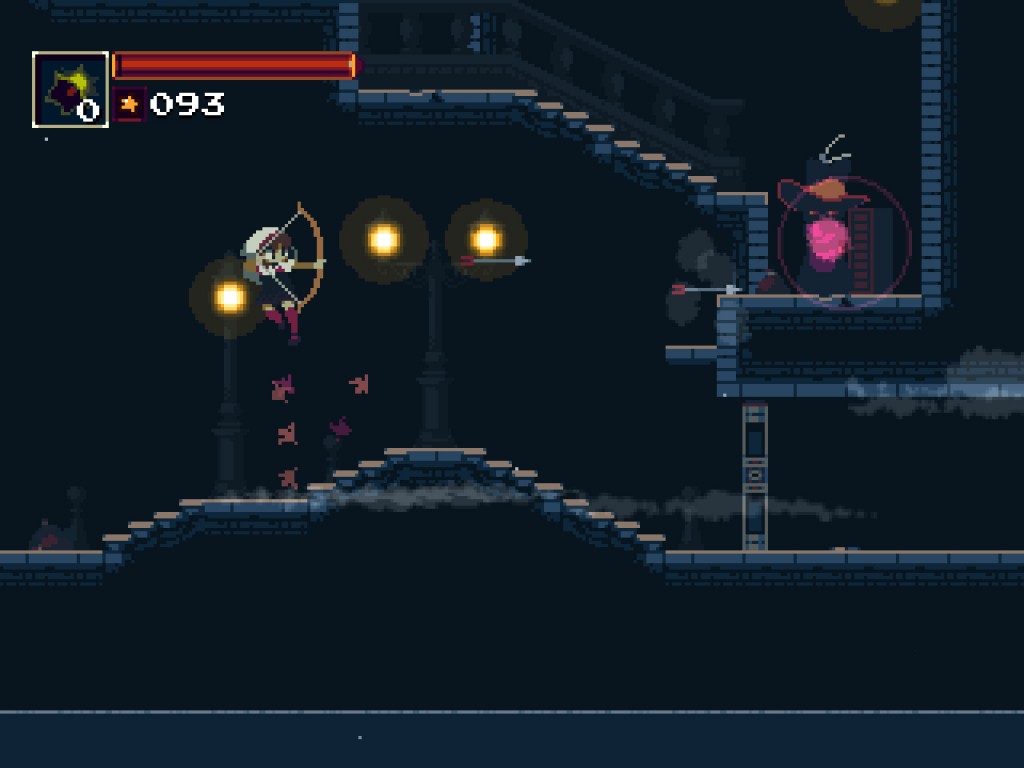 These witches are always a pain to fight.

Like many metroidvania type games, you will do a lot of back tracking and exploration. How Momodora handles backtracking is stellar, and it is something that lot of games in this genre seem to not grasp. In Momodora you explore a huge world where the overworld map slowly unfolds as you explore different stages. A lot of these maps interconnect with each other, and they are divided by zones that are thematically different. The point of exploring is to find items, save points, or bosses, each with its own purpose for progression. Save points in particular are very important because they function very similarly to the bonfires in Dark Souls; they restore your health as well as restock all your active items. The main issue with these type of games is that backtracking is such a slog, and often times there is a real problem with how challenging and monotonous a room could be. In Momodora all maps are balanced, making each area distinguishable from others, while retaining enough challenge that no room is boring to go through. At the same time no room is so ridiculously challenging that it makes backtracking a nightmare. When backtracking through an area it makes no sense to have an obstacle so punishing, especially when you have to go through the room multiple times, with enemies respawning every time you re-enter a room. Momodora makes rooms either combat encounters or platforming challenges, and when it combines the two it never feels like one is overbearing. Also because the visuals between each zone are so drastically different, along with the rooms being distinguishable enough from each other, it means the map isn’t as imperative to success as other metroidvania style games. The overall level design of the game is so exquisitely executed, that backtracking and exploration never feels bogged down because of the balance with the game’s challenges. No dreaded Symphony of the Night-like hallways to be found here. 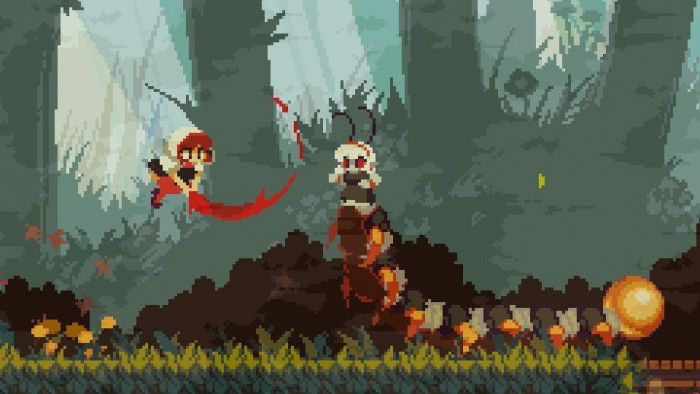 I mention challenge a lot in this article, and the combat is intuitive enough that any of those challenges can be conquered with finesse. Kaho has two main offensive attacks: a melee and ranged attack. While these can be upgraded, the basic concept of this never really changes. Both attacks serve a mechanical purpose and can be used in a variety of ways, but what makes combat appealing is the fluidity of these attacks. Animations are incredibly smooth when committing to any action, with attacks feeling very heavy and having a very impressive sound effect to correspond to each hit. Momodora’s visual style and smooth animations make combat feel fluid and rhythmic. There are items in the game that change up the gameplay a little, and getting Kaho’s holy hands on them is usually rewarding. These handy trinkets fall into three categories: active items, passive items, and equipment. While these items are certainly helpful, it is how you play with the combat system that determines whether you succeed. As you play the game you get better at knowing the timing and effectiveness of your attacks, making success more based on skill rather than item accumulation. This crisp action combat system has a lot of parallels to Dark Souls and how that game handles combat and progression. A slick combat system combined with stunning animations makes every encounter one of finesse, rather than RPG numbers.

Momodora is a visual treat. The art style maybe hit or miss with some, but there is no doubt that there was a lot of work put into the animations of all the sprites and effects. The soundtrack is also very good, with a range of bombastic scores for the boss battles, to more ambiance filled tracks for the various rooms. While the music is very good overall, the quantity of what is actually there is on the lower end of the spectrum.

Welcome to the end of the review! If you made it this far you can see that I didn’t really have a lot of bad things to say about Momodora: Reverie Under the Moonlight. This visual style, slick combat, and balanced progression makes this such a good value for how little the game costs. While the overall experience is short, there is replay value for those hardcore completionists. Momodora stands as a title that rides highly on its mechanical and design strengths, showing that even a little game can make a bigger statement than those within its own genre.

Full disclosure: This review is based on a PS4 review copy of Momodora: Reverie Under the Moonlight given to HeyPoorPlayer by the publisher.