We Could Plant a House. We Could Build a Tree 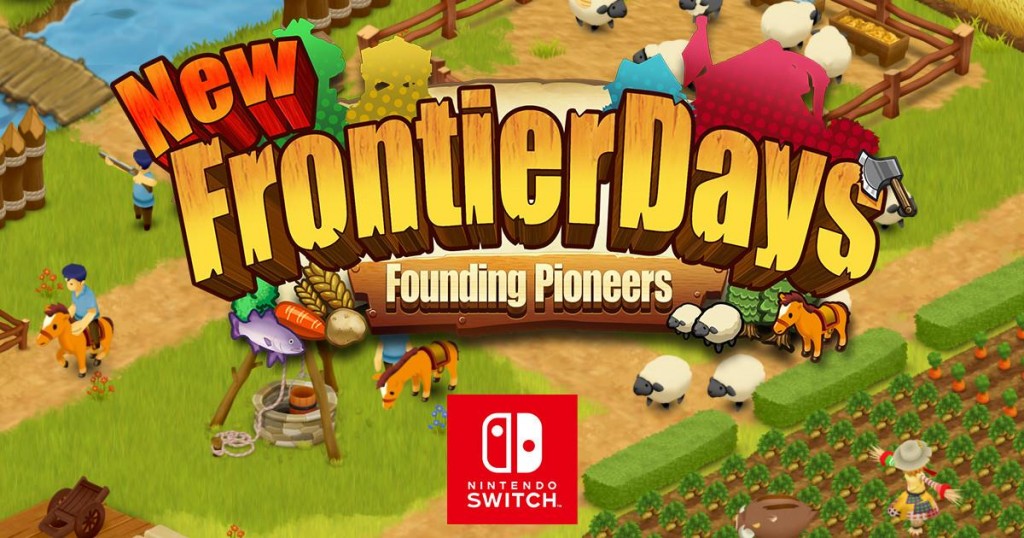 I felt a burst of excitement upon booting up New Frontier Days: Founding Pioneers on my Nintendo Switch. Nintendo’s new console felt like the perfect machine for quick sessions of farming simulator goodness. It was intriguing to think that I had 3 playing options to consider while providing my virtual community the ample foods and comforts they deserve – handheld mode with the Joycons attached, touch screen mode, & docked mode. But after a few underwhelming hours or so, I ultimately was feeling bored since I’ve done all there is to do in the game.

New Frontier Days: FP greeted me with three playmodes to dig into: Story Mode, Survival Mode, & Free Mode. In Free Mode the player is able to play to his or her heart’s content without any worry about getting a game over screen. Story Mode requires the player to have enough food and currency to keep the villagers happy, but if you run out of either of these for two years in a row and it’s game over. Survival Mode does away with any introduction and tosses the player right into the action. It’s recommended that the player cut their teeth on Story Mode before attempting Survival Mode due to its lack of a tutorial. 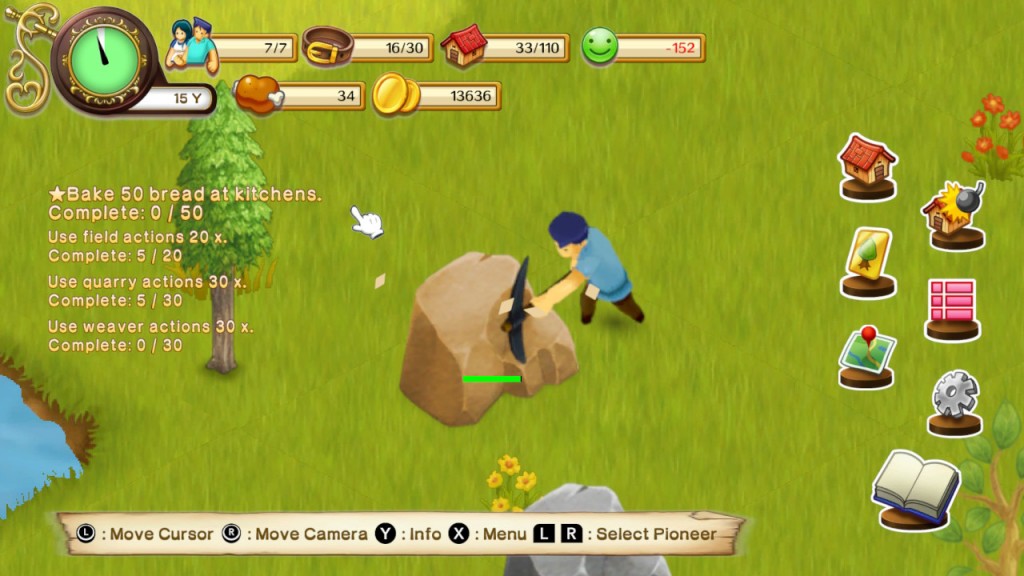 There is a whole lot of info spread across this screen.

Story mode starts off with a nice introduction that informs the player of the basics. You’ll learn how to build your first structure, use that structure, and create more villagers to make more structures. It gets right to the point and wastes no time cutting the player loose to explore and discover things for themselves. I enjoyed the leash being taken off after the quick introduction and it’s refreshing to see more developers trusting that the player has some understanding of standard video game basics. After quickly filling up most of what surprisingly little space the map provided, I started to check off predetermined goals one-by-one and earning cards that granted me boosts in saleable goods. Money, food, and happiness are the main categories that must be watched closely because they are what are going to eventually let you advance to a new age and build more advanced structures.

If you manage to run out of food and/or money for two years in a row you’ll be greeted with a game over screen and have to start another game. It’s extremely tough to run out of either of these due to the ample amount of resources for your pioneers to gather by means of mining, hunting, and chopping down trees. All of these resources can be processed and then sold in facilities that can be built using these same resources. Deep into the story mode managing resources becomes a bit of a juggling act when determining what should be processed and sold vs what should be used to build. At the end of every year, which is about 5 to 6 minutes real time, the village will have a festival. These festivals cost a significant amount of money and food, which adds to the challenge of accumulating enough to advance to the next age. The final age of story mode consists of more modern structures such as state-of-the-art hospitals and manufacturing plants. I was able to get to the final age in a very short amount of time, and unfortunately, once I completed the story mode, there really wasn’t much more for me to unearth.

I was able to test out the three different ways to play and felt handheld mode to be the best. The touchscreen provided an easy way for me to select my pioneers and instruct them where to travel to on the map. Using the Joycons while the Switch was docked wasn’t too difficult but the cursor did have to be in exact spot on a pioneer for me to be able to select them. I did run into an issue when instructing a pioneer to perform a task that needed to be repeated. Due to the task taking only a couple of seconds to finish I didn’t have enough time to move my cursor to the “repeat” symbol on the menu system. I was only able to perform this task when using the touch screen on the Switch. Overall, the easiest way I found to play was using the Switch in handheld mode with the Joycons attached due to the functionality of the touchscreen and quick button presses of the Joycon. Both these features together made me feel like I was in complete control of the gameplay. 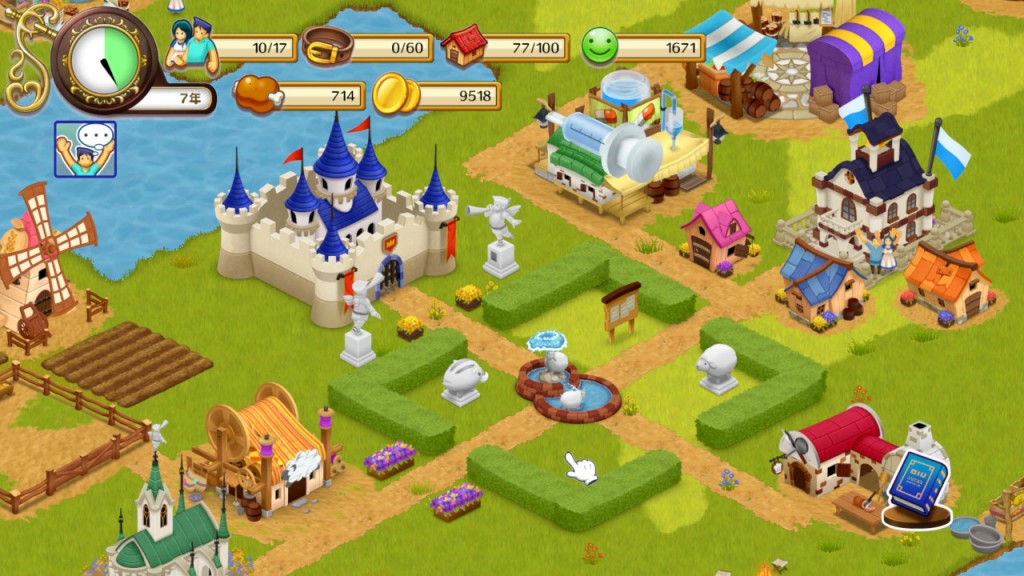 I wish real hospitals had big syringes on top of them.

If you’re familiar with farming simulators you’ll feel at home with New Frontier Days: FP. Everything here is extremely colorful and cute right down to the wheat fields. Watching a handful of pioneers blasting away wild animals with their muskets is hilarious and witnessing your village advance through the ages is rewarding, but again, it all goes by too fast. If I do have a complaint about the presentation it’ll have to be the menu system when choosing a structure to build. Icons let the player know what items are needed to build certain structures, but these icons are not accompanied by text. This leads to some confusing sections of the game where I was mining iron instead of basic rock, and this is all because I didn’t know the difference between the two. Some simple text under each icon could have saved some headaches. It would have also been easier if there were a screen showing all items in my inventory. I ran into a few instances where I wasn’t sure how much of a material I needed to build a new manufacturing plant, and the only way to find out was to click on the corresponding structure. This is fine but when a structure I’d like to build calls for several different materials from different buildings, I’d have to select each building just to find out what I had in my inventory.

One of New Frontier Days: FP’s strong points is the music. It’s full of charming folk music that seemed to always fit the age that I was in. Other than the music there isn’t must to talk about in the sound effects department. The pioneers don’t speak, even when trying to get your attention. Bears will growl when trying to kill a pioneer but that’s really all you’ll hear other than the nice music. It would have been a big help to get at least an audio cue when a pioneer was killed off, that way the player would know when he/she needed to make a replacement. Like the rest of the game, I wish there was more here to talk about but there really isn’t. There is no substance.

New Frontier Days: FP is an OK game if you’re in for quick sessions of farming simulator basics. A clunky menu system and lack of an inventory screen makes this seem like it needs a bit more polish. If this was a mobile game I’d be happy recommend it, but being that this is on a console, I’d say use your money elsewhere.

Full disclosure: This review is based on a Nintendo Switch review copy of New Frontier Days: Founding Pioneers given to HeyPoorPlayer by the publisher.