A thrilling game about… having a cup of tea and a chat?

Behind the greatest novels, there’s a huge amount of writer’s block and staring despairingly at a blank page. It’s this part of the creative process that Dialogue: A Writer’s Story focuses on. Dialogue’s wordsmith heroine is Lucille Hawthorne, a young writer who lives in Renford (which seems to be a fictionalized London suburb). Lucille is trying to balance writing for an online magazine with writing a bold new Sci-fi/Fantasy novel. While searching for inspiration, she meets Adrian, a mild-mannered biologist who she uses as a template for the main character of her novel. While trying to complete her story, she’s influenced by interactions with her family and friends, which ultimately shape the fiction she’s creating. It’s a novel (pun intended) concept for a game, and the design is just as unique, as Dialogue delves far deeper into the nuances of conversation than any visual novel before it.

The first mode of Dialogue in Dialogue is the most familiar one: you’ll see paperdolls of Lucille and who she’s talking to, and get to choose different conversation options at key points. This will require you to quickly get a read on the people you’re talking to if you want them to have a pleasant interaction with you. And making people happy is seldom formulaic. Some characters, such as Lucille’s father – a frustrated poet turned teacher – prefer to be challenged rather than just meekly agreed with. Adrian, a kindly biochemist dweeb, prefers Lucille to say comforting things, but only when she’s not interrupting his often rambling train of thought. Of course, you might not want to make people happy. It’s up to you whether you want to be assertive, agreeable or inquisitive. Dialogue is foremost about exploring different possibilities rather than achieving set goals. 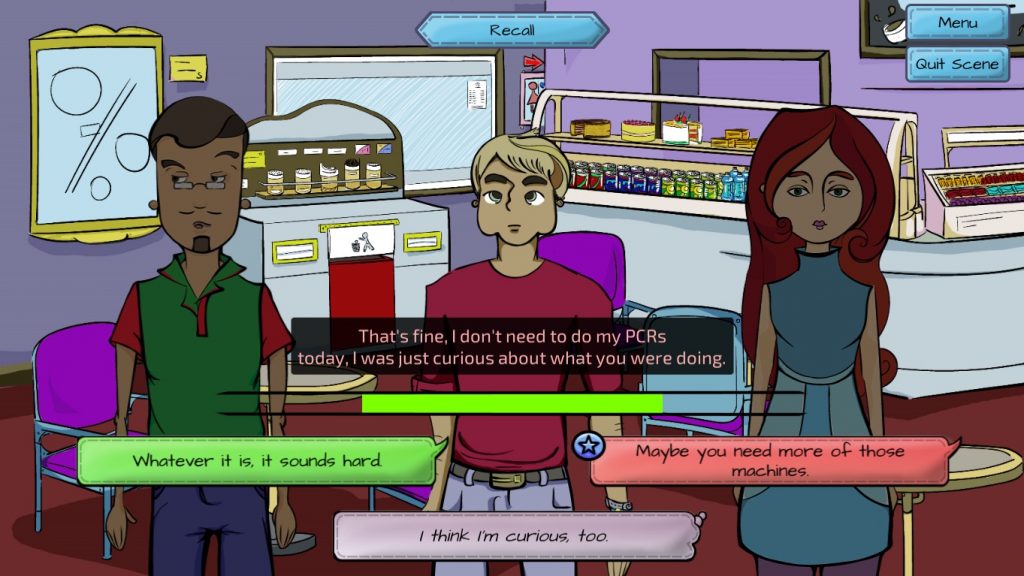 Lucille has to work hard to empathize with tough-talking Amal.

The second mode you’ll play is more investigatory than persausive. A text readout of Lucille and her chatting partner’s dialogue will appear in a box and you’ll be able to navigate through a conversation grid by clicking on snippets of text that lead to new box. You can even bring up a “map” where you can track back through the course of the conversation. What adds another layer of complexity to this mode is the addition of thoughts and perspectives. As the conversation proceeds, Lucille has questions. When she’s talking with her brother Jacob, she wonders what type of ending he’d prefer for her novel. This question appears as a button in the corner of the screen. When you find the section of the conversation where Jacob reveals his feelings about the subject, you can click the button to “answer” her inquiring thought. With some thorough probing during the investigatory segments, you’ll find new topics of conversation which you can then use in other encounters.

Lucille will also unlock “Focuses” during the course of the chat-em-up scenes. Focuses are Lucille’s conversational power-ups, with her being able to equip them for different scenes. One Focus gives you more time to choose dialogue options, while another shows an aura around different characters to show whether they approve of Lucille’s responses (and this can be crucial as English people are experts at suppressing their seething irritation). You can even revisit previously completed conversations with new topics and focuses later on, using your increased abilities to unlock even more scenes. 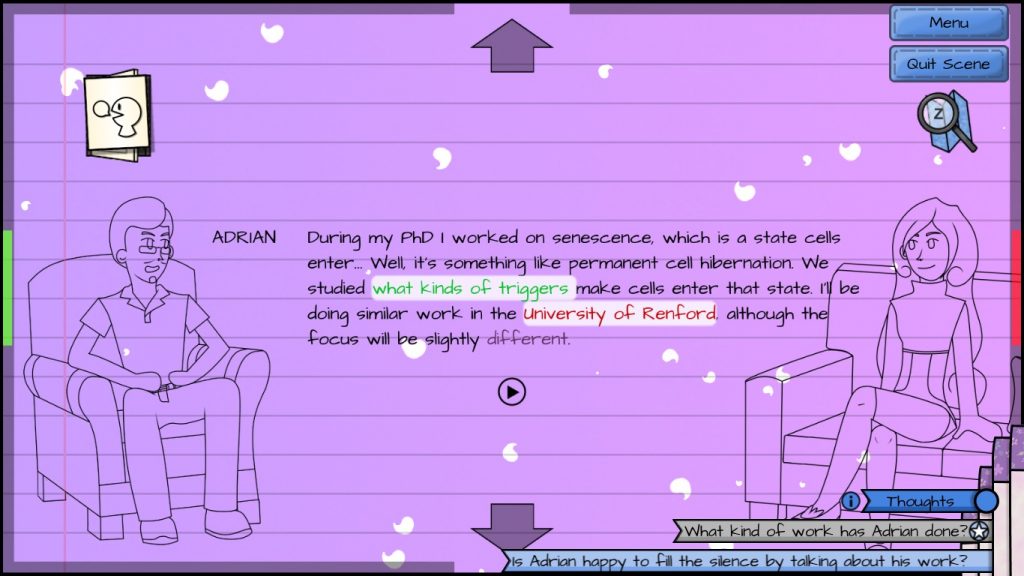 Is Adrian happy to fill the silence by talking about his work? SPOLIER ALERT: Yes!

On a personal level, I was very charmed by Dialogue. Even the decidedly low detail art style and the ambient, utterly unobtrusive soundtrack work well with the more down-to-earth setting. So many scenes felt powerfully relatable, such as when you’re responding to emails and choosing your wording. Every time you change your selection, Lucille thinks aloud: “Too pushy”, “Too obvious”, “That sounds passive-aggressive” or countless other doubts. Just like real life you eventually just have to choose something because you know there’s no “perfect” answer. It was refreshing to play a title that focuses more on the subtleties of social interaction rather than the broad strokes.

In most titles where conversation is part of the gameplay, the onus is placed on getting a desired outcome from an interaction. In Dialogue, understanding and empathizing with people is very much an end in itself. All too often in games, conversations can feel like social negotiations to attain goals. Lucille tends to be more focused on knowing people better than what she can get from them, and this is reflected through the open-ended gameplay. I found myself wanting to be more like Lucille – someone genuinely interested in people and their complex personalities. 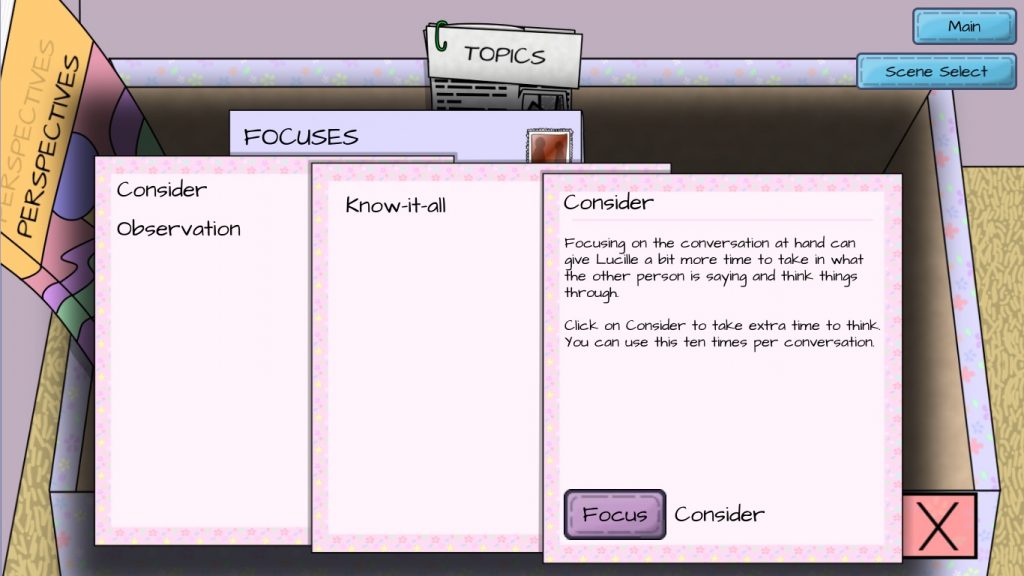 One issue that did arise early on in Dialogue is how startlingly true-to-life these conversations are, which is to say – some of them can be a bit… boring. Listening to Adrian talk about different types of cell formations and the bureaucracy involved in getting research grants made my eyes glaze over a bit. It rather reminded me of talking to my own scientifically minded friends as a flighty creative type. Later on, Lucille even gets subtlety mocked because of her less economically viable profession by Adrian’s bitchy (but ultimately lovable) co-worker Amal. Of course, as an English degree holder and online magazine writer myself, I’m not bothered by this since I’m obviously rolling around in stacks of cash!

I could very much relate to Lucille and how she struggles on a daily basis to find inspiration, motivation and to just make the words flow. One of her tactics is to take a walk down the embarkment to recharge her batteries and refresh her mind so she could start writing anew. In a case of life reflecting art: after one of the wordier conversations Lucille has with her Mother about a parental holiday to France and the fascinating cheeses to be found there, I had to take a bit of a break from reviewing the game myself. Dialogue pulls absolutely no punches in simulating the often mundane conversations real people have in real life.

Dialogue: A Writer’s Story is brilliant from a conceptual standpoint. True to its name, it boasts the most comprehensive dialogue system I’ve ever seen in a game, and just playing it makes my head spin with the possibilities of implementing it in something like a high budget Bioware/CDProjekt/Bethesda RPG. However, those AAA games tend to have a lot of sex, conflict, world-altering decisions and that type of thing! Dialogue is relentlessly, almost proudly, subtle in its characterization and subject matter. It’s a very English game – the most profound conflicts you’ll find are when you accidentally interrupt someone’s train of thought with a premature question, or get mildly irritated at a well-intentioned but unhelpful suggestion. Whether you’ll find Dialogue: A Writer’s Story fascinatingly unique or deeply boring depends on the kind of person you are, but I promise you that you’ve never played anything quite like it before.

Full disclosure: This review is based on a review copy provided to Hey Poor Player by Tea-Powered Games. 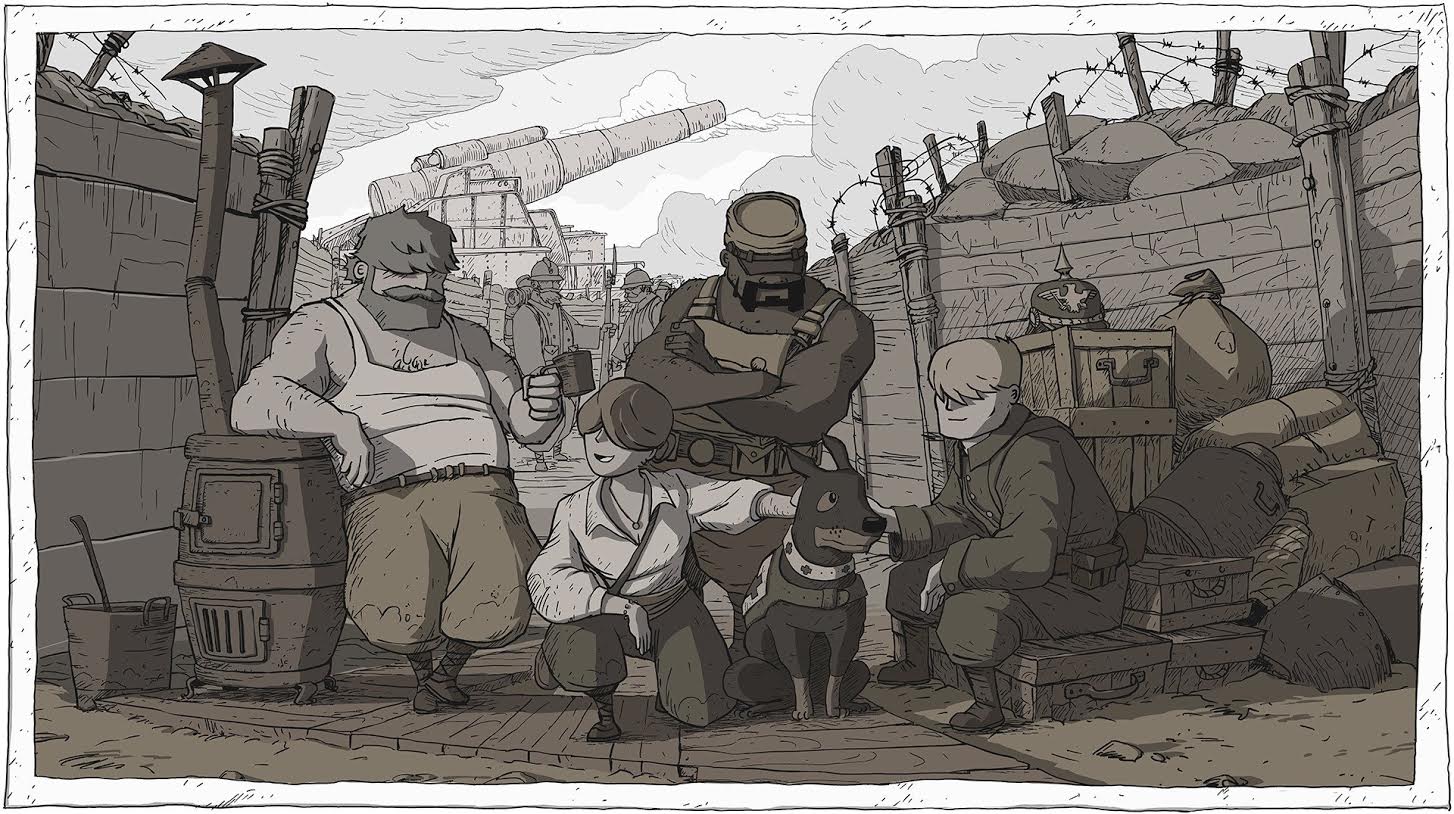