Be a damsel. Cause distress. 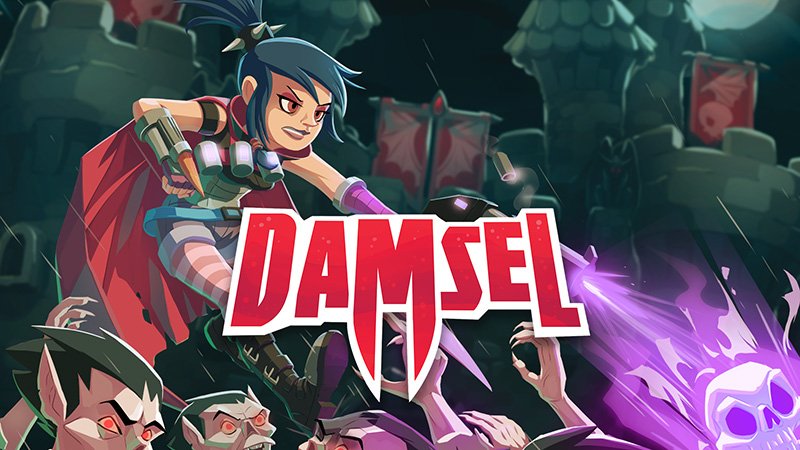 A game called “Damsel” about vampires makes a certain mental image come to mind. Perhaps it’s something right out of a Twilight book with a boring heroine and sparkly mythical beings, or a standard knight in shining armor tale that rescues a fair maiden from an undead army of bloodsucking creatures. Makes sense – after all, damsel is often used in conjunction with the word “distress”, which means she always needs saving, right?

Well, not this damsel; she doesn’t need anyone to save her, and if there’s any distress, she’s the one causing it. 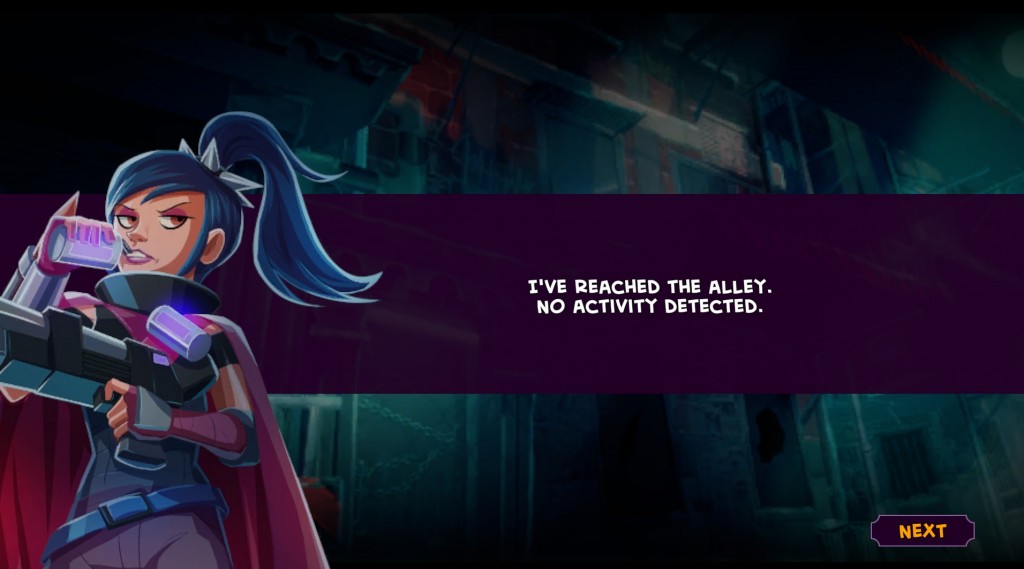 The indie game Damsel, created by Screwtape Studios, is an action-packed platformer that will put your skills and reflexes to the test. It is currently raising funds on EquityArcade, an equity-based crowdfunding platform that allows gamers to invest in video games (as opposed to donating) and receive a portion of the profits once the game launches. Damsel snatched a top 20 spot on Steam Greenlight back in February of 2016 and has a tentative release date of Q2 2017.

First impressions of Damsel are positive – the game’s trailer is what initially drew me in, as solid trailers often do. The graphics looked solid, the trailer production value was of a higher quality than a fair majority of games that you see out there, and the alpha footage hardly looked alpha – most games on Steam don’t look this good at release, so Screwtape Studios clearly knows what they’re doing.

The free investor demo continued to deliver on the expectations the trailer set. Players take on the role of Damsel, an agent sent to destroy vampires all over the world, taking her to exotic places such as Brazil, China, and the US (that’s exotic to someone, right?) She does this with the use of a pretty cool weapon – it looks like a shotgun/cannon hybrid that generates a concentrated light blast, destroying most enemies with a single hit (two for the bigger baddies). Damsel has set goals depending on the mission criteria, which means sometimes she’s eliminating all enemies within a certain timeframe or hacking into a computer to gain knowledge of the vampiric villains. 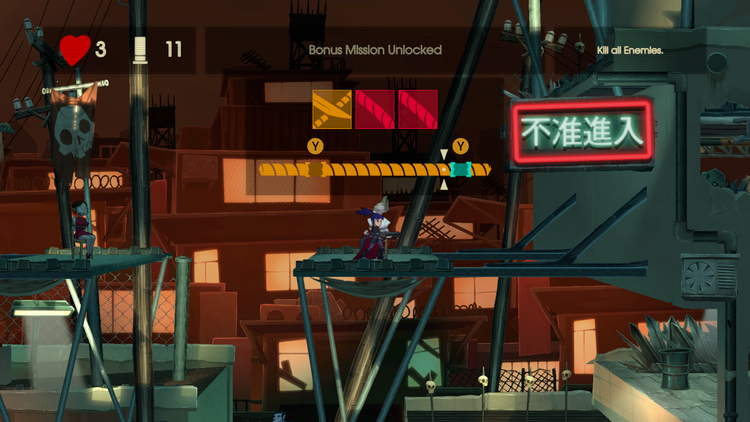 If there’s one thing that should immediately stand out to players, it’s the aesthetics. The art style is pretty dynamic – one would think that a game about vampires would be dark and depressing, but Damsel manages to breathe life into the genre by keeping the settings quirky and cartoonish without being overly so. Screwtape Studios manages to toe the line between moody and light-hearted, and the aesthetics has a lot to do with it. I’m reminded of “Who Framed Roger Rabbit” when I see some of the backgrounds, and I’m definitely loving that.

Character design is on point, starting with none other than Damsel herself. You’d think an agent would probably dress a little more practical, but that’s not Damsel’s style. She simply oozes that scene/emo style we all either loved to hate or completely embraced ten years ago, and since I’m the latter, I thought her style was totally wicked. She just looks… cool – and that’s a requirement for when you’re battling undead bloodsuckers. 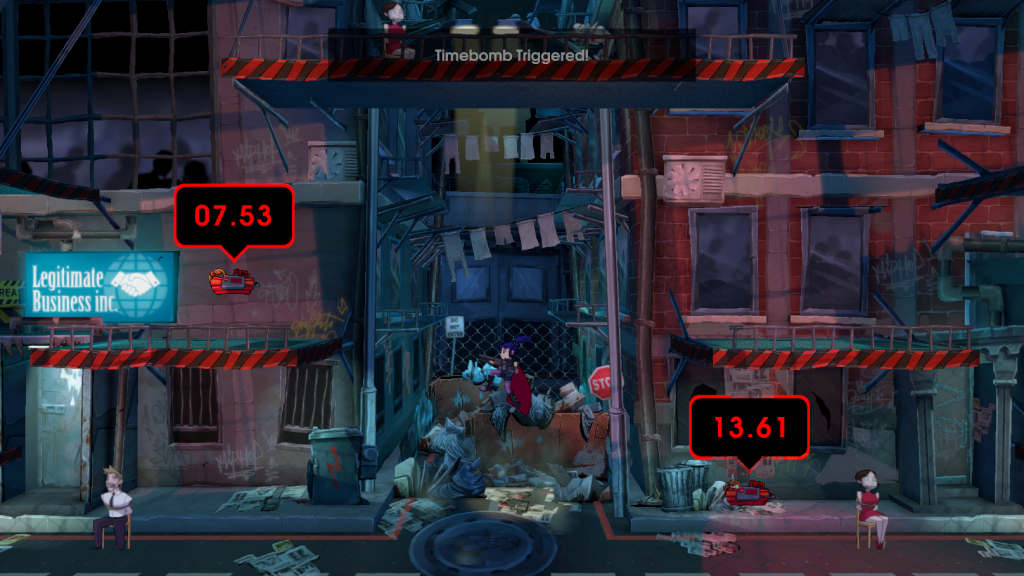 And speaking of undead bloodsuckers, the enemy character design was also pretty impressive. As they are still in alpha, they may potentially release more designs, but there are currently 8 different enemies to defeat with different tactics required to take them out. I learned this the hard way during my playthrough; I had become so used to the vampires not really fighting me back, so I was taken by surprise when one shot a projectile at me, insta-killing me with one hit. Yikes. Learned my lesson and ensured that I got him on the next run.

Music is, for lack of a better word, “cool”. That adjective just perfectly sums up the soundtrack – the music fits the settings and really sets a great tone for the game. Is it possible to feel energized and relaxed at the same time? Because that’s what playing Damsel with the sound on is like. The music and art style go together like peanut butter and jelly. There’s a joke about a “more iconic duo” in there somewhere, I’m sure.

Gameplay itself is pretty smooth, although I personally recommend a controller if you’re not a PC gamer. Controls are the standard WASD keys to move, space bar to jump, “E” for special actions such as freeing a hostage or hacking a computer, and the left mouse button fires your weapon. A mechanic I really appreciated is that it didn’t matter if you jumped first or used your directional buttons first, you could jump laterally either way. If you play platformers, you know that’s a huge deal and is often a make-or-break feature in this genre. Once again, Screwtape Studios didn’t disappoint! 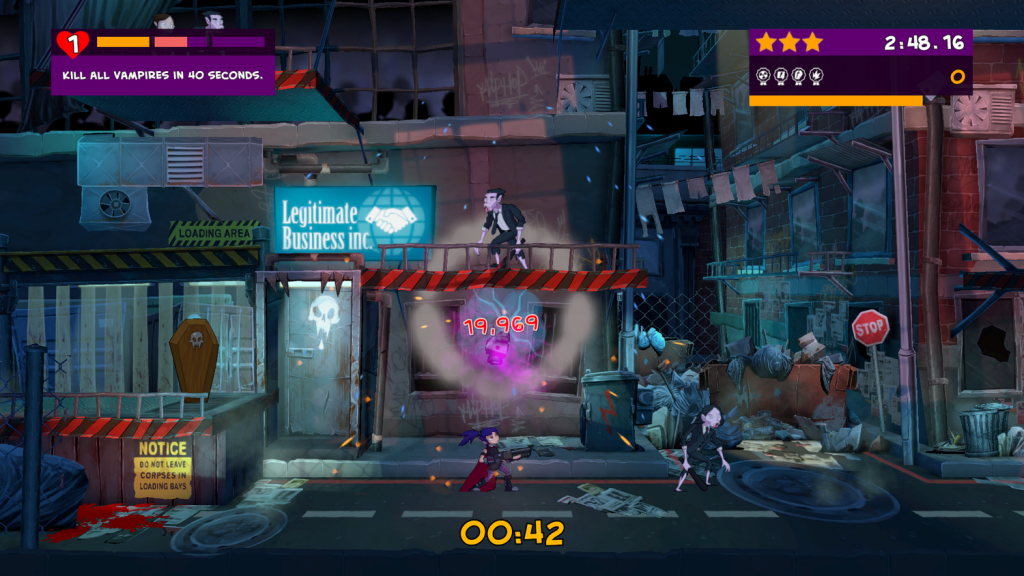 The objectives of each level will differ in some way, such as defeating all the vampires within a certain time limit or rescuing all the hostages. With that being said, the real objective is to rack up as many points as you possibly can. Damsel features a three-star system similar to Angry Birds, and part of the fun is redoing levels over and over again to see if you can’t get to the third star with an impossibly high score.

While the game boasts over 150 levels, I worry about level diversity. Will there be enough variety to keep players entertained? Will they want to keep coming back for more after 30 minutes of gameplay? Personally, I think it’s something that the developers are aware of, and they’re working tirelessly to keep us invested in the storyline and gameplay. Only time will tell if their efforts are paying off; at this moment in time, I believe they are.

When I saw Damsel, I remembered why I love Steam. Sure, the website is still, for the most part, a raging dumpster fire of student games and forgotten titles, but it occasionally features a diamond in the rough – a rare gem not often seen in the literal onslaught of indie games churned out these days. Damsel meets and exceeds my expectations of a high quality indie game on Steam. Its pleasing art style, dynamic soundtrack, and challenging gameplay will satisfy newb and sage platformer fans alike, and I cannot wait for its full release later this year.  But don’t just take my word for it – play the free investor demo here. Now go on – be a Damsel and cause some distress!

Full Disclosure: The author writes for the EquityArcade website but is not an investor in Damsel and has no financial interest in its success.