Pixel Toy has successfully resurrected Drop Dead for the Rift, and it’ll consume you. 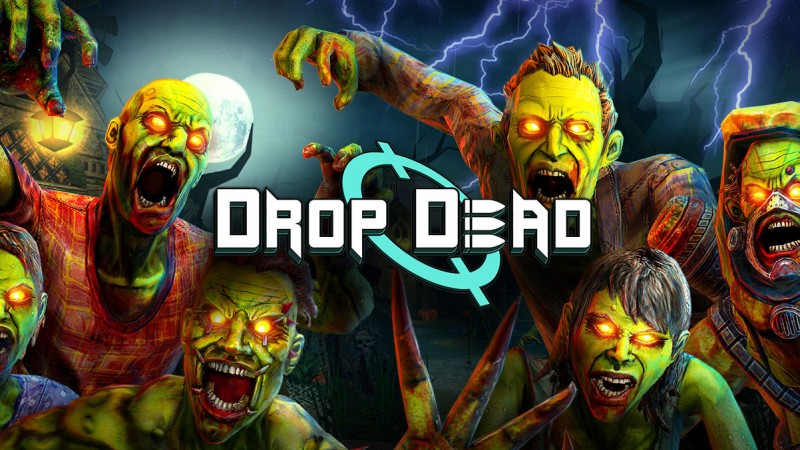 When it comes to VR, rail shooters are a dime a dozen these days. Given the overwhelming number of options at trigger-happy players’ fingertips on Steam and the Oculus store, it really takes a lot for one to stand out from the crowd. That said, when I discovered I’d be reviewing Drop Dead, the latest shooter for the Rift that has players battling it out against waves of zombies, yet another trope that’s been done to death (get it?) in VR, I slid my headset on and feared the worst.

Boy, was I mistaken. Because while Drop Dead may not reinvent the wheel when it comes to VR shooters, but it’s so much fun that it’s easy to overlook any feelings of deja vu as you mow down hordes of hungry has-been humans and freaky, drill-fisted terrors on your mission to save the world from the latest zombie apocalypse.

Originally released last year for the Gear VR, Drop Dead makes its debut on the Oculus Rift with the very welcome addition of an expanded story and full Oculus Touch controller support. These help to make what was already an undeniably fun zombie shooter into one of the most enjoyable games to release on the Rift in recent months, delivering Rift owners a surprisingly fun and goofy narrative along with plenty of messy violence to scratch the itchy trigger finger of fans of classic arcade shooters like The House of the Dead and CarnEvil. 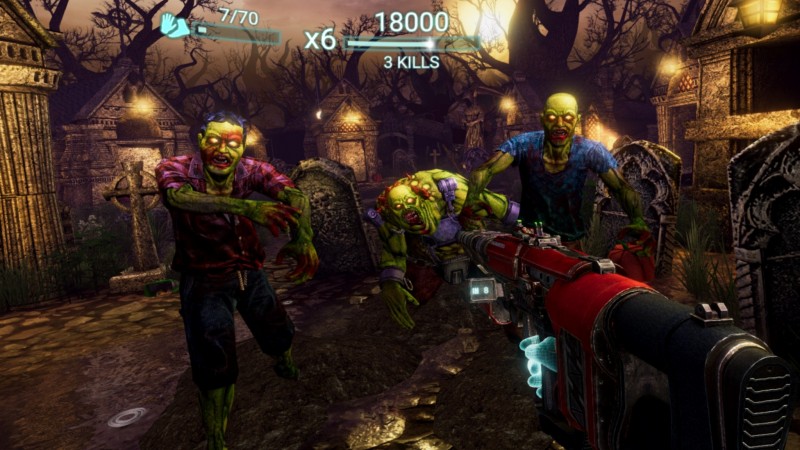 Drop Dead’s story treads some familiar ground. An evil German scientist named Dr. Monday has created an army of zombies to help him conquer the world. Players take control of a time-traveling special agent as he and his scrappy band of ex-CIA operatives work to put an end to Monday’s schemes and rid the world of his zombie menace. Sure, it’s a story we’ve seen countless times before, but developer Pixel Toys deserves credit for bringing the campy tale to life with entertaining characters and voice work that feel like they would have been right at home on your average Saturday morning cartoon.

Drop Dead’s campaign unfolds over three different timelines, each expanding the story slightly while switching up the challenges you’ll face and weapons weapons you’ll have at your disposal. While you’ll begin the game with your trusty magnum on your hip, you’ll be able to considerably up your arsenal with such exciting implements of destruction as assault rifles, shotguns, Gatling guns, and grenades.  Overall, the number of weapons at your disposal isn’t huge, but each one feels great to use, and the various stages are designed in such a way that you’ll always have the right tools for the job within reach.

Speaking of the stages, Drop Dead takes players through a variety of settings as they blast their way to the game’s finale. These areas include derelict farms, desert wastes, underground secret lairs, and even a bloody hayride that has players dishing lead at the undead from atop a moving tractor. Sure, these settings are pretty standard stuff when it comes to zombie shooters, but the game still manages to shine thanks to its polished shooting mechanics, satisfying weapon variety, and entertaining writing. 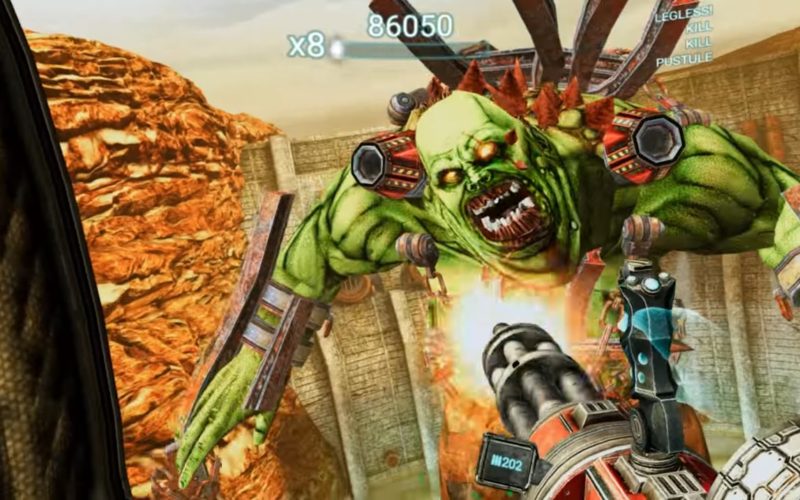 Since their release, the Oculus Touch controllers have proven to be the standard when it comes to VR interaction. That said, it’s no surprise that they handle everything Drop Dead throws at them with ease. Actions such as holstering your weapon, slapping cans of time-slowing energy drinks into your handy utility belt, and blasting baddies feels really natural. It’s easy to raise your rifle to your eye and line up head shots on distant ghouls, and chucking grenades is as simple as lobbing an underhanded pitch (just don’t get carried away and toss your Touch controller through your monitor).

While Drop Dead’s Touch controls work without a hitch, the rest of the game performs admirably as well, with the action never skipping a beat during our time with the game, even when the action is at its most intense. Head tracking is also consistent and responsive. In fact, Drop Dead has the honor of being one of the few games that’s never forced me to pause the action in order reset my view. So, hat’s off to Pixel Toys for that!

In terms of visuals, Drop Dead may not be the most visually striking game to make its way to the Oculus Store, but it’s still quite easy on the eyes, and an obvious step up from last year’s Gear VR release. Despite the dreary settings you’ll explore over the course of the campaign, the cast of zombies are colorful and feature plenty of personality. This is true for the various weapons you’ll pick up as well, which sport all sorts of little details such as elaborate etchings or moving parts. You’ll also see a few massive bosses during the game’s story, who make a great example of the sense of scale the medium of VR brings to the table. The most important takeaway here is that while Drop Dead may not put your fancy new GTX 1080 to the test, it’s a nice looking game that performs like a champ, leaving you free to focus on turning zombies into mincemeat without any jarring fits and stops.

When it comes to comfort, I personally found Drop Dead to be a game that’s easy to play for lengthy sessions without experiencing any nagging nausea. However, those who are prone to motion sickness may want to play the game in “Casual Mode”.  Casual Mode ditches the sweeping transitions between shooting positions for something more akin to the teleporting locomotion found in other shooters, which should making things easier for players who’ve yet to earn their VR legs. Though it’s worth noting that the jump from Normal to Casual mode comes at the significant cost of immersion.

When all is said and done, developer Pixel Toys has done a great job of bringing last year’s Gear VR shooter to the Oculus Rift. The expanded missions and excellent use of Touch controls make what was already a solid shooter a surefire hit for the headset. Drop Dead may just be the latest of scores of wave shooters to make its way to the Oculus Store, but that doesn’t keep it from being a fun ride while it lasts. And with three timelines to blast your way through, it’ll keep its hooks in your for hours on end. If you’re a fan of arcade light gun games and feel like putting some zombies down for a dirt nap, Drop Dead is well worth adding to your library.

“Full disclosure: This review is based on a review copy of  Drop Dead given to HeyPoorPlayer by the publisher.”