Defeating the Overseer will not be a mere oversight. 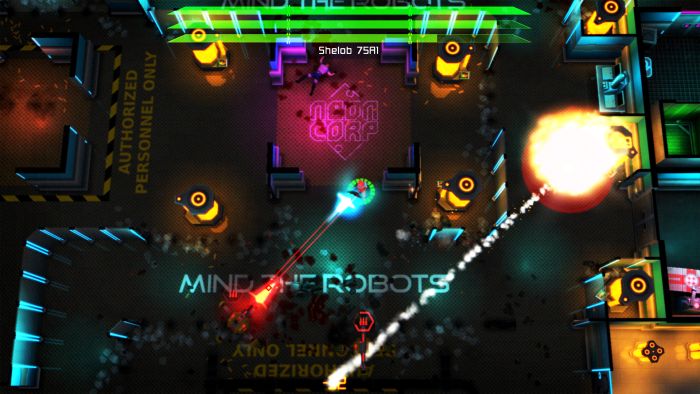 Remember Crimsonland? I sure do. To this day, the 2014 remake remains one of my favorite go-to games after a long, hard, and stressful day at work. So it’s no wonder that when I heard that the same developer was releasing a new top-down shooter, I was intrigued. “Would it be another mindless-yet-satisfying shooter excursion?”, I wondered. As it turned out, the end result was quite different from what I expected, but that actually turned out to be a good thing.

Titled Neon Chrome, the game sees players assume the role of a hacker in a distinctly retro-futuristic setting. Your mission is to take down the Overseer: a malevolent figurehead and main drive behind the titular Neon Chrome building. It’s not just another urban landmark, but rather a super skyscraper that pokes way up into the stratosphere. Naturally, the Overseer resides in the highest tier of the building, and reaching him encompasses a long trek through many floors that are brimming with all manner of traps and hostile protectors, both human and machine alike. Fortunately, our hero makes use of an extensive collection of clones, meaning that death – which is a most certain prospect – will not deter them in their anarchistic quest. 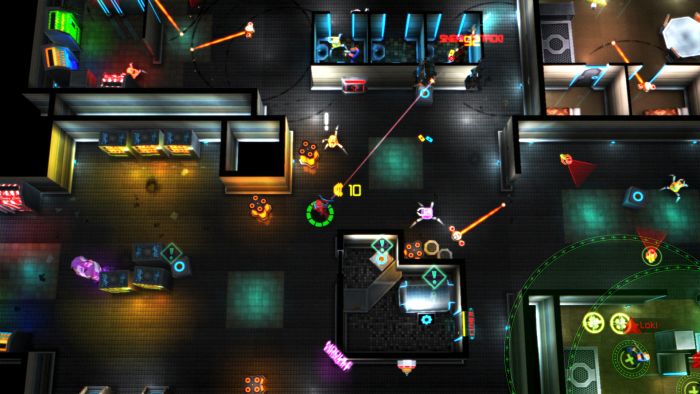 There are different classes on offer that give the game a sense of replayability, though there is actually very little variety between them. The real beef of the experience comes from the assorted upgrades and improvements players may purchase. Credits found in each floor may be used to buy more health, new weapons, and even luck. Still, even with all the upgrades and weapons on offer, it remains unwise to rush into the experience with guns blazing and hope for the best. Things need to be approached tactfully, and besides, things start getting rather difficult once you’ve cleared the first few floors. Not an unfair difficulty, mind you, but a reasonable challenge all the same. Just right, in fact.

Things play out in a rougelike fashion, or more accurately, roguelite: levels are randomly-generated and players have assorted stats to level up, though the penalty for dying isn’t as severe as in other games of its ilk. You’ll lose your purchases but your credits will remain, and the existence of checkpoints mean that cold restarts aren’t required. Sometimes it’s even in a player’s best interest to restart a few checkpoints behind so they may build up better stats and purchase more wisely. 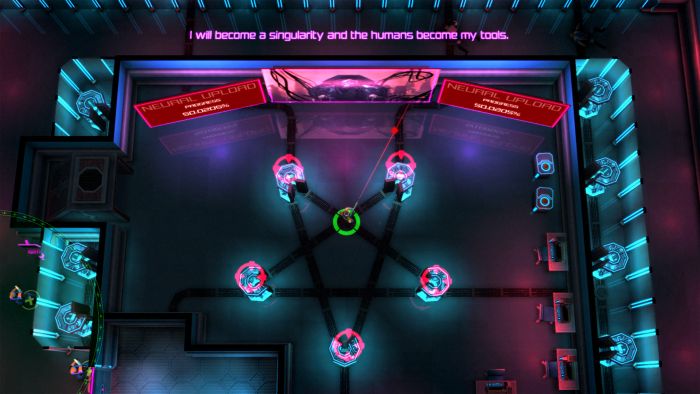 Besides the classes and paths for upgrades, the game offers additional choices for players in how they wish to take down their various adversaries. You can sometimes spring a surprise attack on them by staying out of their line of sight and shooting at the right moment. Or perhaps you can shoot through thin walls and barriers, getting twisted satisfaction from the combined destruction and loss of life. Or, like a typical FPS veteran, you can shoot explosives and laugh maniacally at the destruction you’ve wrought. A circular indicator for splash damage is a particularly welcome touch in such scenarios, limiting the amount of cheap deaths in a game where it’s in your best interest not to waste your lives even if they are unlimited.

It’s tempting to say that a game like Neon Chrome is a good gateway to the roguelike genre, but truthfully it’s far more of a shooter than an RPG. It’s the sort of thing that will appeal to seasoned veterans of isometric, top-down shooters who are craving for a new twist in a tried-and-true formula.

The presentation is rather delicious, invoking imagery of Blade Runner and other sci-fi greats from the 1980’s. Neon Chrome‘s world is dark and gloomy, yet saturated with colorful neon lights. There’s a cold and indifferent technological aspect to it as drones hover just outside of view and the building’s floors are gray, clinical, and sterile. Sound effects are suitable and serve their function without being remarkable, but naturally the music is a fantastic chunk of synthpop goodness and works perfectly in establishing the game’s mood and tone.

Neon Chrome is an interesting attempt to infuse more intellectualism and RPG elements into the standard top-down formula, and it largely succeeds in this endeavor. The retro-futuristic setting works well with the slower, more thoughtful gameplay style. It definitely borrows from its predecessor Crimsonland, but fans of that brand of brain dead twitch shooting might not appreciate Neon Chrome‘s style. Still, it’s great for anybody who cares for something a bit difference in their daily dose of shooting carnage. We recommend you snag it by heading over hereabouts.

Full disclosure: this review is based on a Steam key for Neon Chrome given to Hey Poor Player by the publisher.