The Ghost Busters anime we never asked for. 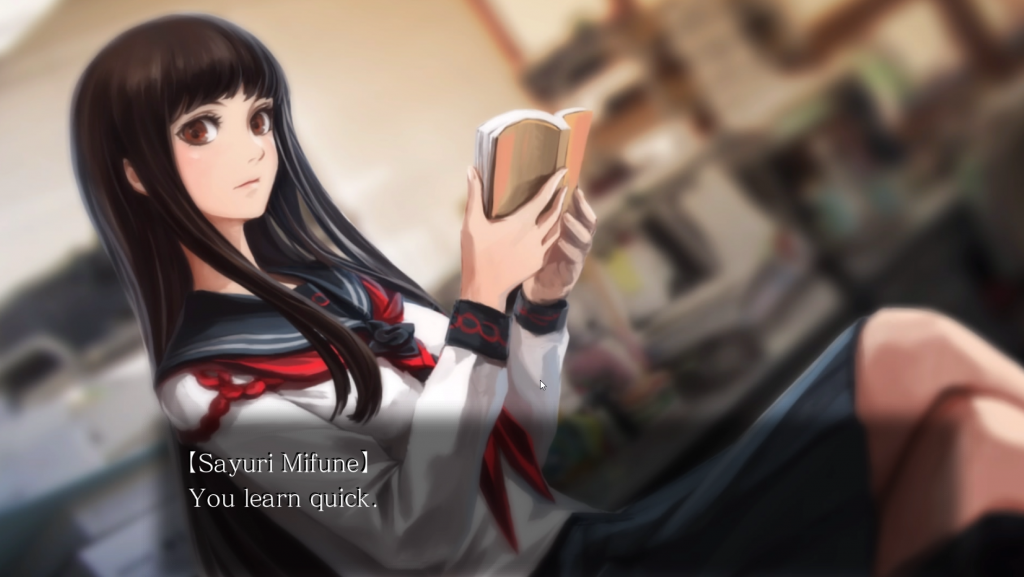 A game where you play sexy anime students and hunt ghosts seems very much up my alley. If you’ve listened to the podcast or have seen my videos, you will more or less know what appeals to me. Now, despite the premise behind Tokyo Twilight Ghost Hunters Daybreak: Special Gigs, the game starts off slow and takes a decently long time to get somewhere interesting. It’s a game a that demands you pay attention, even though there is a sense of diminishing returns throughout the first few hours. I’ve spent over twenty hours on this game, and while I can say I did like Tokyo Twilight Ghost Hunters, it was often a struggle to like. 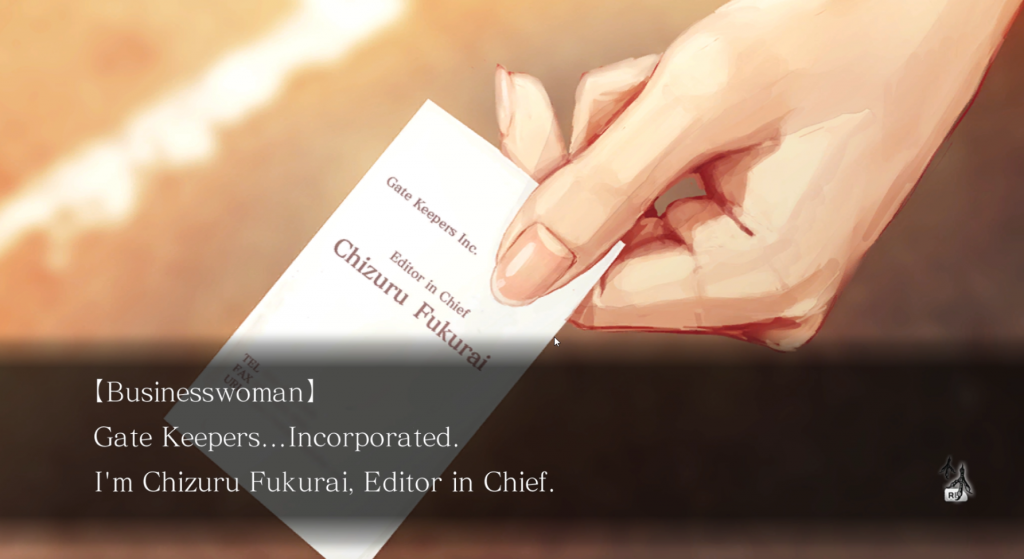 HPP’s own Editor in Chief presents his business card in a similar way, yet oddly he has more feminine nails.

In Tokyo Twilight Ghost Hunters Daybreak: Special Gigs you play a faceless self-insert that you create. You can choose your name, height, weight, and a plethora of backstory exposition options that do not seem to impact the story. While it is nice you can do all this, it is rather shallow. You are a new student at a local high school, and you run into another student on your way to your first class: no toast in mouth included. That is when your life changes, because this is a very iterative visual novel premise, and unfortunately it doesn’t get less tropey as the game progresses. After meeting a few of your archetypal classmates and side characters you are thrust into a plot that involves spooky ghosts. You join an organization that helps ghosts pass on into the next life, by engaging in a weird tactical combat system. There is an overarching narrative that takes place between all the individual Scooby-Doo cases, and the side characters go through their own personal arcs. I will avoid talking about the story too much, because to talk about the plot further would mean I’d have to dig into some spoilers. Overall, it is your standard visual novel affair with a hint of spooky ghosts, and surprisingly enough the iterative visual novel elements aren’t the worst part of the game.

Despite the paranormal elements, Tokyo Twilight Ghost Hunters plays itself completely straight. There is a lack of self awareness in its plot and tropes, and that’s kind of a bummer. I’m not saying every work needs to be snarky and self aware, but a little bit of jabs at its own premise would be nice to break up the pace. The biggest problem with the plot is that it’s slow – painfully slow. I’m aware that this is a visual novel and that the starting pace of most VNs is similar to a snail’s pace, but it is something to be noted regardless. It takes a good while before anything truly interesting starts, and until then I was just laughing at how predictable some of the early scenarios were due to the iterative plot and characters. Now, I keep on talking about how iterative the characters and the story are, but I’m not necessarily saying that is a bad thing. Just because it isn’t anything groundbreaking doesn’t mean it’s boring, and towards the end of it all I did grow to like and become attached to most of the characters. The mini arcs that the side characters get is enjoyable to go through for the most part, and there are  dialogue options that were legitimately cute. It is also hard to deny that the really good art direction does help you like these sexy anime characters. It doesn’t do much new but what’s there is a treat to those who enjoy visual novels – if you can get through the first three tedious hours of set-up. 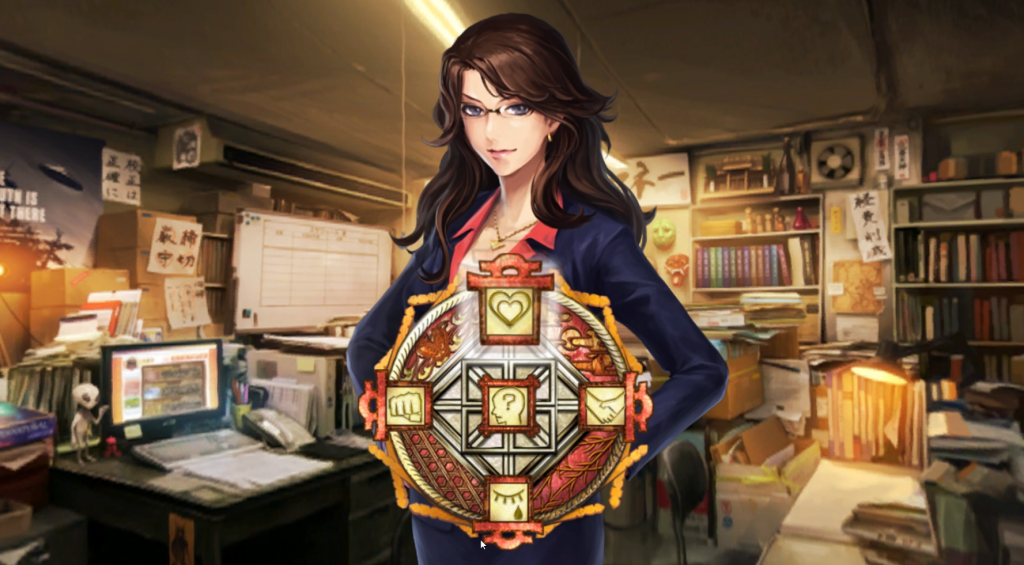 Never use the mouth icon unless you’re shameless.

Now while the visual novel elements work for the most part, the parts that I did find not enjoyable were the weird-ass interaction wheel and the combat. Throughout your playthrough you will have a prompt to interact with either the environment or characters. The way the wheel works is you get five starting options, which are the emotional context preceding the actual action. These include neutral, questioning, angry, sad, friendly, and horny – uh, I mean “loving.” After you pick your totally-not-weird emotional state you then pick between icons that look like a hand, nose, ear, eyes and – my personal favorite – mouth (so that’s what you’re into, Nathan! – Deputy Editor). These are to represent your senses and, by proxy, your actions. Now let me make this clear: the few times you use this for interacting with the environment, it does work well. I don’t truly believe it affects much of the actual game but it is interesting at times and does work; where it doesn’t work however, is when you are interacting with living humans. For example, when I ran into the incredibly attractive tsundere student council president, I wanted to seem nice so I used “friendly” and then “mouth”, with the intention of having a friendly conversation. Now when you first get this wheel in the game, it does not tell you anything – no information on what the icons mean. This is bad, because while I thought mouth meant talk, it actually meant using your actual mouth. So my character tried to lay a friendly kiss on the already fuming student council president. In this game, the mouth icon literally means using your tongue, lips, and teeth in any weird combinations of those elements. This was very unclear and I didn’t really get it till I tried it a second time on a very handsome glasses-wearing senpai (I’m sure you were just testing the game mechanic, Nathan! – Deputy Editor).

The interaction wheel is not very clear, and often times doesn’t yield the reaction you want. More often than not you are more likely going to play it safe and just look at characters because that is the most neutral action you can get. What makes this even worse is that the interaction wheel doesn’t really impact your relationship with characters. It doesn’t matter if you look at your busty supervisor with the eyes of super horny anime dude, the interaction wheel doesn’t mean anything because what really matters is dialogue options and mini games. So what’s the point then? Overall, I did not enjoy this. I respect that they were trying to do something different, but the execution and lack of clarity left me more terrified on what my character was going to do. 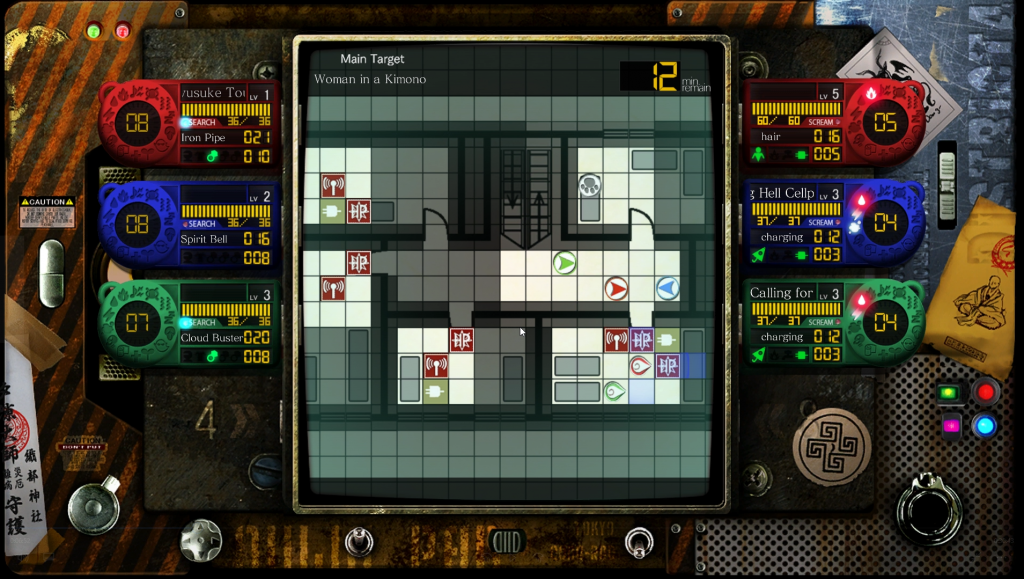 I love looking at dots and squares. Tokyo Twilight Ghost Hunters does not scrimp on them.

Between all the character drama and inappropriate gestures there is indeed actual ghost hunting, and I have never had so many mixed feelings on a combat system in recent times. So before each ghost encounter you have time to review the layout of the area and set up traps accordingly. I did enjoy the actual planning of specific exorcisms. This fits the theme of hunting supernatural entities that defy natural rules so of course you wouldn’t go in guns blazing. There are several items you can purchase (that will be deducted from what your reward is post mission). You place these at points in the level, and the pre-planning has a surprising amount of depth despite the shallowness of the rest of the combat. When you get into the actual combat grid – it is a slog.

Tokyo Twilight Ghost Hunters Daybreak: Special Gigs operates on a turn-based grid RPG combat system. Characters have a set limit of action points (AP), and you move and initiate actions based on the amount of AP. You move and attack in your standard turn-based affair, with one big caveat. All actions take place at once. When you decide your party’s actions, the ghosts also act on the same turn. So when you move your characters and order them to attack, you must also predict where the enemies will move and adjust actions based on that. So if you predict their movement incorrectly you will miss, which happens more often that not. There is also flanking and skills, but the main problem is that the combat lacks finesse. More often than not it felt like a war of attrition, where I just hope I landed an attack on what I intended I to hit. There is a consequence for missing as well; you can break certain things in the environment, which you will have to pay for out of your reward money. Even though chapters lead up to the big ghost encounter, I found the actual combat encounters a slog, with an UI that is dull and uninspired. As much as I wanted to enjoy combat in a visual novel, the experience is underminded by being as shallow as a toddler’s wading pool. Pre-planning is interesting and fun, but once you get to the fight it drags down the experience pretty damn hard. 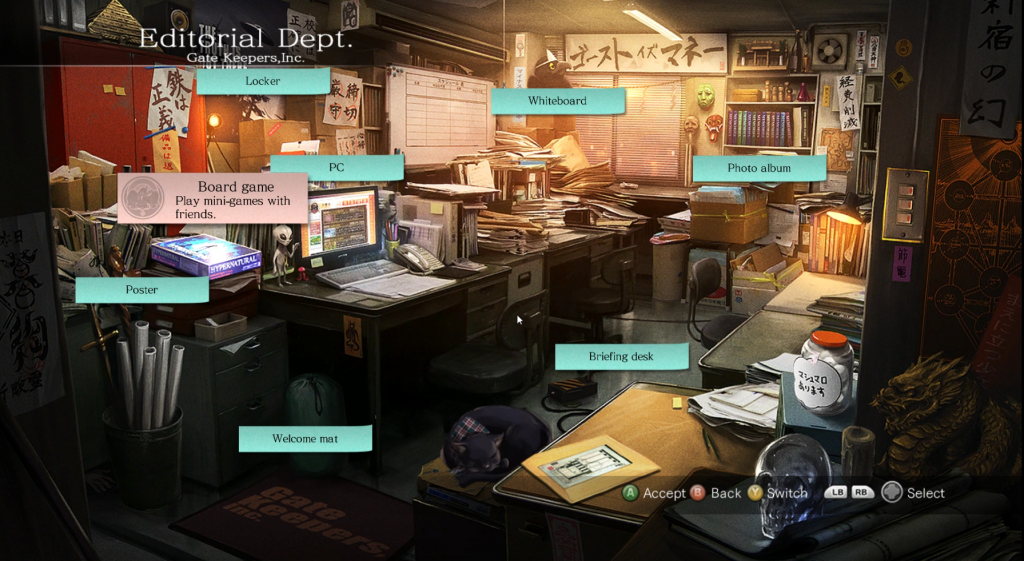 Tokyo Twilight Ghost Hunters gives us something to aspire to. We wish our Editorial Department was this neat and tidy.

All in all, Tokyo Twilight Ghost Hunters is a mixed bag, with any joy I had coming from my love of the visual novel aspect. The art is amazing, the story is cliched but fun, and the combat is lackluster. The game starts slow but eventually picks up with its plot and characters. Alas, it gets bogged down by the repetitive combat. If you aren’t a fan of the visual novel genre, you aren’t really missing out. If you like this type of genre I wholeheartedly recommend you pick this up though, because despite all my criticisms this is a solid PC port of a PS Vita visual novel. At the very least, you get the opportunity to romance a super hot, student council tsundere with a resting bitch face – so that’s something.

“Full disclosure: This review is based on a Steam review copy of  the game given to HeyPoorPlayer by the publisher.”

Greek Tragedy Has Never Been This Fun Here’s a fun quirk of mine you might not know. When I hear everybody sing the praises of something, that usually turns…