“WARNING: You Are Not Ready For This.” 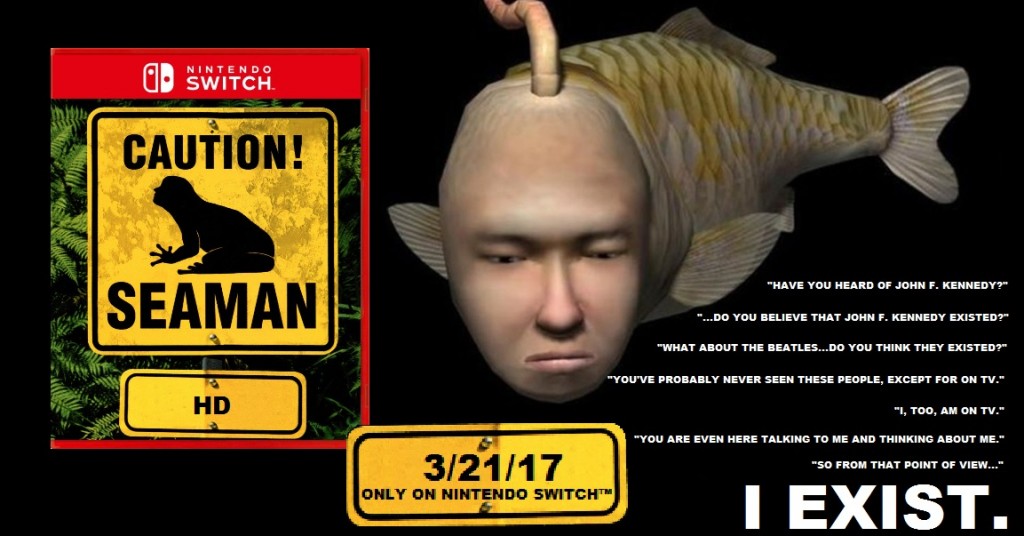 This week on the Hey Poor Podcast, I “The Juggler” Coleman, Jay “Hello My Ragtime Gal” Petrequin, Anthony “Nanthony Plivey” Spivey, and Nathan “The Jerker” Terencio get an exclusive tip: Seaman’s back, baby, and he’s even more unsettling and unplayable than ever. While you’re still “reeling” from that revelation, don’t forget to listen to the rest of the episode, where we’ll discuss Mass Effect Andromeda‘s terrible animations, Wizards of the Coast’s new D&D app, the disappointing Iron Fist, and a whole host of terrible videogames we had to review. We also talk about the best episode of Pokemon ever, the million bajillion open world games that have come out this month, and (for some reason) the many flaws of Ready Player One. In the words of everyone’s favorite Sea Man, Seaman: “You might not think I’m attractive…but your wife will.”*

The News: the Switch is back at GameStop, Mass Effect An-drama-da, D&D Beyond, Nier Automata’s PC port is trash,

*What, you thought this was a joke?

Kicking things into over-Rive I’ve been following developer/publisher Two Tribes for quite some time. The company has produced several favorite games of mine, including the puzzler RUSH and the platformer EDGE.…