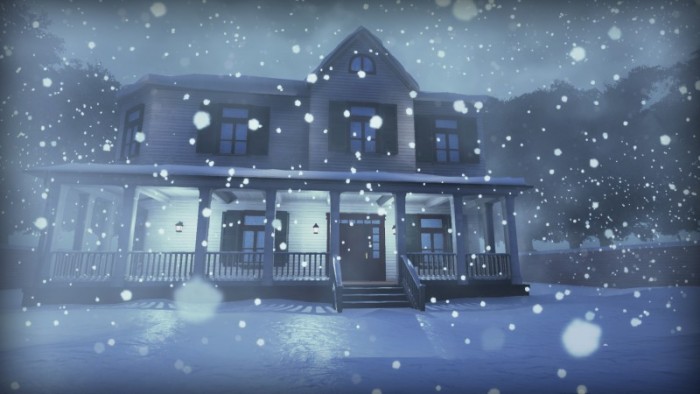 Walking simulators aren’t exactly a rare breed these days, and Waking The Glares is the latest game to follow in the footsteps of the genre made popular by the likes of Gone Home and Dear Esther. Waking the Glares – Chapters I & II is the first offering of what’s planned to be a seven-part saga. And while this serene and occasionally enchanting adventure sometimes shows flashes of promise, a serious lack of polish, jarring technical issues, and uninteresting puzzle design consistently hold the game back from ever managing to reach its full potential.

The debut effort of Palermo-based Wisefool Studio, Waking the Glares Chapters I & II puts players in the shoes of Dawnfall, a lost wanderer as he searches for his lost memories. The game’s first chapter begins with promise as players are plopped onto a snowy street in the middle of a raging blizzard. It’s during this opening moment that atmosphere is laid on thick. Trees whip wildly in the wind and shutters slam against an ominous house in the distance, setting the stage for what looks to be a haunting adventure. However, these initial feelings of mystery and underlying dread are quickly washed away the moment you walk in the door, as all of this atmosphere is replaced with environments that have all of the personality of an Ikea outlet – save for the massive tree that’s bursting through the center of the house, spreading its branches like eager tendrils into every room of the lifeless structure.

Words and symbols factor heavily into the gameplay of Waking The Glares. As Dawnfall enters each room, the narrator will often recall a memory that serves as a clue to how to progress.  Afterwards you’ll need to solve some sort of simple logic puzzle to advance in the story. Sure, this sounds like pretty standard adventure game fare. The problem is that the game has no inventory to speak of. If you’ve collected the necessary item you need to solve a particular puzzle then a single button press is all that’s required to proceed. This turns what could have been a more compelling puzzle game into more of a tired scavenger hunt; the only times my progress ground to a halt was due to lazy design choices, such as prompts displaying before I actually had the ability to interact with an object, rather than the design of the puzzles themselves. 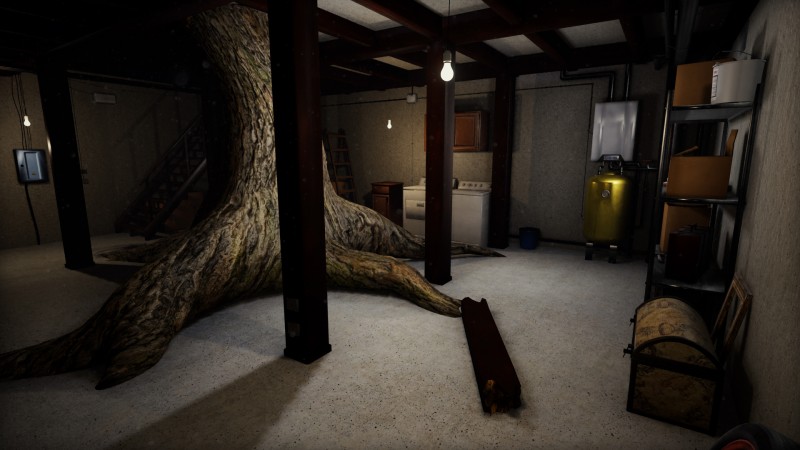 Simplistic puzzles and performance issues are the root of Waking The Glares – Chapters I & II’s problems.

After rummaging through every cabinet in the house, flooding its basement, and undoubtedly sending the home’s insurance premium through the stratosphere, I was whisked away to the game’s second chapter. Things start off with just as much promise here as the first episode, with a tranquil boat ride down a river at sunset. The warm visuals and poignant piano melody that accompanies this scenic cruise is one of the standout moments of the game.

Eventually this relaxing jaunt on the water comes to its end and we’re introduced to Episode 2’s central locale – a Parisian square. This new setting is bustling with dozens of sentient artists mannequins sporting monocles, dapper top hats, and handlebar mustaches. These fancy automatons are the only thing that breathes some life into what’s otherwise a depressingly bland and sterile setting that frankly would have looked middling two decades ago.

It’s here during Waking The Glares’ second chapter that the game’s technical issues really started to bubble up to the surface. I played up to this point in VR with my Oculus Rift. And while the first episode ran well enough, throughout this chapter the performance screeched to a sad slide slideshow right out the gate. Mind you, my review rig defaulted to ultra settings when running the system test. Strangely enough, toiling with the graphical settings did nothing to remedy the issue; and considering the game’s very modest visuals and my system’s ability to run taxing VR titles such as Epic’s Unreal 4-powered Robo Recall with maximum settings. This obviously lack of optimization makes playing Waking The Glares’ second chapter virtually unplayable in VR. Oh, and did I mention my character’s gaze was also stuck facing backwards the entire time up this point? This awkward glitch, combined with the game’s jarring way of disabling head tracking and locking your gaze towards whatever object you’re interacting with, made for plenty of uncomfortable moments throughout my time spent with the game. 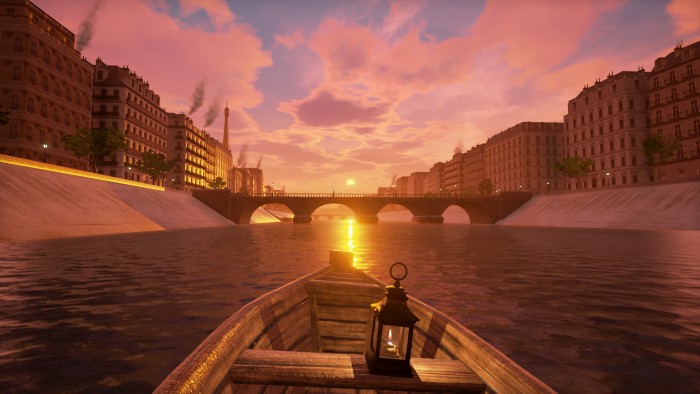 The game shines the most during its more tranquil and introspective moments.

After tossing my Rift aside and firing the game up in desktop mode I found things to run without a hitch. But my frustration with the unstable VR performance was replaced with dismay at this second act’s literal laundry list of objectives and uninspired puzzles that made the time spent in this drab city wholly unremarkable. The lion’s share of this segment is spent tailing around mannequins marked with the same mark of a strange talisman you receive during the first chapter and following them around to steal a specific belonging. Halfhearted puzzles present themselves once again, but their solutions are so obvious that you’ll rarely have to pause to ponder their solutions. It can’t be stressed enough how more interesting puzzles would have gone a long way towards making Waking The Glares – Chapters I & II a more enjoyable experience.

Despite the game’s many missteps, Waking The Glares Chapters I & II ends with a surprising plot twist that has me interested to see where the story goes from here. However, it can’t be stressed enough that developer Wisefool Studio needs to put a considerable amount of effort into polishing the game’s subsequent chapters to avoid the many pitfalls that plague this freshman effort. As it stands, Waking The Glares – Chapters I & II‘s weightless puzzles, myriad technical issues, and insufferable VR performance make it hard to recommend, even when considering its $5 asking price.

This review is based on a Steam review copy Waking The Glares – Chapters I & II given to HeyPoorPlayer by the publisher.