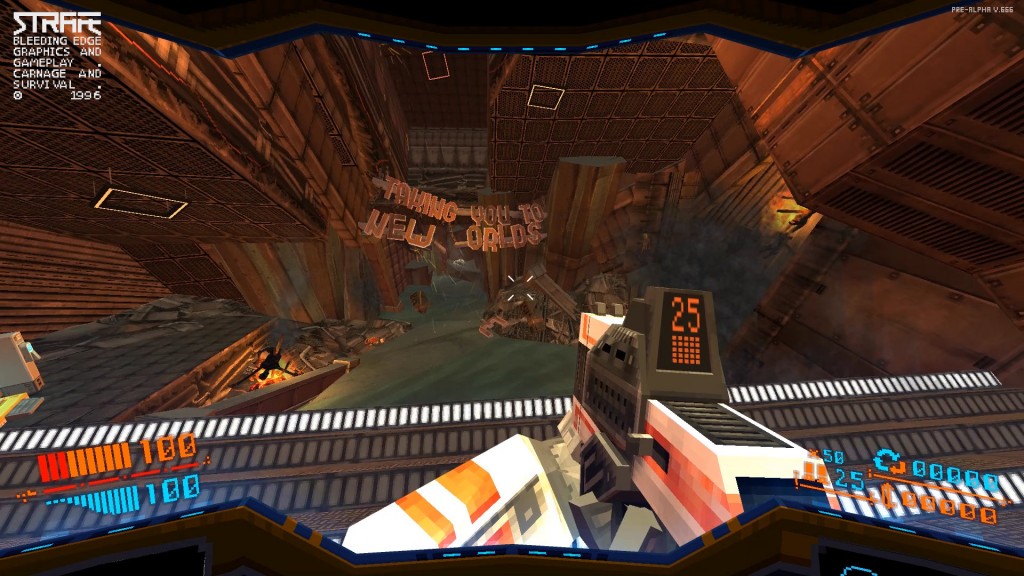 STRAFE is a self-consciously retro, low-poly FPS, which gives a loving parody of the beloved, high-octane shooters of the later nineties such as Quake and Unreal Tournament.  It’s very much in the mould of 2015’s Bedlam, but with more of a multiplayer focus.

Independent developer Pixel Titans and publisher Devolver Digital have announced that STRAFE – what they boldly claim is the “greatest game of all time” – will now release on both PS4 and PC May 9th after a slight delay due to a claimed “unforeseen polygon shortage.”

“STRAFE® requires over 150,000 meticulously placed polygons to create its bleeding edge graphics… Through an unexpected legal entanglement and a series of clerical errors, nearly 25,000 of those polygons arrived late to Pixel Titans world headquarters thus delaying the game by a few weeks.”

“STRAFE is the fastest, bloodiest, deadliest, most adjective-abusing, action-packed first-person shooter of 1996. Featuring breathtaking photorealistic graphics and persistent gore that allows you to paint levels red with the excessive entrails of your enemies.”

If creating art out of low-poly viscera appeals to you then you can find out more about strafe by visiting the game’s website at www.strafe1996.com. Check out a gameplay demo from this year’s E3 for more old-school gibbing action to tide you over so your head doesn’t melt from the added waiting time for what will surely be a punishingly gory title.