Pyre was one of the games I was most excited to play at PAX East this year. Between 2010’s Bastion and 2014’s Transistor, Supergiant Games has made a splash full of gorgeous art and music, interesting writing featuring unusual world’s, and extremely tight gameplay. I got to sit down for a solid 15-minute introduction to Pyre, the studio’s latest, and oh me oh my did I come away not only impressed, but quite surprised.

My time with Pyre began with a nameless and faceless protagonist, as part of a world presented in a manner much more storybook-like than usual for the studio. The player is stranded in a vast wasteland of some sort, and then found by a trio of strangers in need of someone with the ability to read a book of ancient scripts written in strange runes on black paper. Luckily you can, and so you join the crew, leading them into the first couple battles in a series of mystic rites that will be the focus of the game in full.

I took control of the three characters, only able to move and control one at a time. The game turns into a 3 v 3 arena match, each with a bright and ghostly flaming goal, a sphere in the center that teams have to fight over. Each character can dash, throw out an aura to temporarily eliminate enemies, and hurl the ball to one another on their way to the enemy goal.

Also, it’s tense as all hell. Because I could only control one of the three characters at a time, and especially considering how different their speeds and attack ranges were, I found myself thinking extremely carefully, watching which opponent moved when around the battlefield and it’s obstacles.

Sometimes I would use the small and speedy Rukey to make a beeline for the ball, arcing and weaving around enemies at just the right points, only to be intercepted and have to think quickly enough to toss the ball to one of the other two. The huge and menacing Jodariel worked mostly as a front line of defense against opponents, but in a pinch I was able to bowl through with her to pass to Hedwyn, the mid-speed and most versatile of the three. The system is engrossing and wickedly intense, and made me cheer and snarl loud enough that the poor kid playing next to me looked at me strange once or twice. His loss.

The first traces of story I got to see were also presented through some of the things that make the game even more unique. When I was in-between the two major matches I was guided through, I was granted the freedom to glide a cursor around the wagon the band of strange folk call home, and learned some tidbits about the strange, seemingly purgatorial world in which everything takes place.

Assuming the demo is a reliable indication, Pyre is not only looking just as fast-paced and engaging in its action as Supergiant fans are used to, but also taking the signature handling of unique narratives in some new directions. I was able to get to know the characters and make a variety of dialogue choice that seemed to matter, all in a matter of one 15-minute demo.

Pyre launches on PC and PlayStation 4 later in 2017. 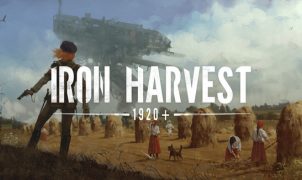 Oh, The Sweet, Sweet Iron-y     I’ll say it right off the bat: the gaming community is in dire, dire need of real-time strategy games. Though there is…