Years on, and Aiden Pierce is still the undisputed king of terrible protagonists. Meant to be a cool hacker-cum-vigilante who rebels against an oppressive system, he instead comes across as dull, empty cypher, incapable of showing genuine emotion.

He claims to care about his family, and his pursuit of vengeance for his niece is the motivation he claims for his campaign of murder and mayhem across the city. Yet he is quite happy to take on a hundred street races and contract killings before rescuing his kidnapped sister. He sees himself as a noble vigilante, but has no issues hacking into a cancer patient’s phone and nicking their pitiful life savings. He’s not the first gaming protagonist to hypocritically claim to be the good guy while being ruthless and brutal, but at least those other protagonists weren’t complete soulless murder-bots like Aiden.

One way to show Aiden as a more sympathetic, human, interesting character would be in his relationship with Clara, who the game teases as Aiden’s love interest. Of course when (SPOILER ALERT) Clara is murdered by hitmen, this only drives home what a sociopathic figment Aiden really is. He sees his love interest dead on the ground and makes an expression as if he’d just been mildly amused by a cute puppy picture on facebook. This is fitting, of course, because after the cutscene is finished, he immediately goes back to playing with his phone! While his love interest’s corpse is quite literally succumbing to rigor mortis in front of him! Pay attention actors: this is the face you make when you’re wracked with unbearable pain and sorrow!

Aiden was so embarassing as a protagonist, he only appears in one side mission in Watch Dogs 2, and doesn’t even get to speak (thank God). It’s as if the developers felt obliged to include him in some capacity for continuity’s sake, but wanted to keep his inclusion to the absoloute minimum possible. In Watch Dogs 3, it might just be better to quietly forget he ever existed.

Perhaps Aiden is intended a commentary on how our hyper-connected age is making us into deadened husks staring into glowing screens, compulsively clicking our lives away. Maybe he represents how echo chambers in social media treat casual cruelty towards those they disagree with as heroic, creating plenty of self-righteous jerks in the process. Whatever he is, Aiden is the worst gaming protagonist of all time. 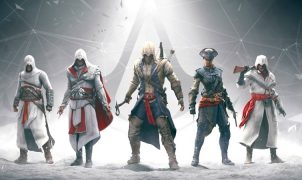