Could there be death on Mars? I’ve always had a soft spot for tactical twin-stick shooters. I love the other kind, too, the fast-paced Helldivers style of action adventure, but I have fond memories of sinking hundreds of hours into Valve’s criminally-underrated Alien Swarm, coordinating with friends to try and survive the brutally difficult alien hordes. Throw in a clearly Doom-inspired story about mutants on Mars and a wisecracking robot companion, and you’ve officially piqued my interest. And so we come to Solstice Chronicles: MIA, a tactical twin-stick horror shooter that takes place in the same universe as Ironward’s last outing, The Red Solstice. It’s currently got a Fig campaign with 15 days left, and I’ve just finished playing the three-level demo the developers gave us.

Standard preview code disclaimers apply, of course. It’s pre-alpha code, nothing I played is representative of the final product, it’s only the first three levels of what promises to be a much larger game, et cetera. Take good and bad with a grain of salt – these are just my impressions based on the little I’ve played so far.

First of all, if you’re a big fan of The Red Solstice, it’s probably best to put it out of your mind when you look at MIA. While the former was a Night of the Dead-like with groups of up to eight players teaming up to face hour-long randomly generated challenges, the new game’s a linear campaign about upgrading skill trees and completing objectives. The two are connected by a premise (a virus on Mars turning people into mutants) and an almost identical graphical style, but not much else, which surprised me at first. The Steam store page says that the game will feature co-op in its final form, but what form that co-op will take is anybody’s guess at this point. I can say only that I hope it is implemented eventually, as a purely singleplayer game seems like a bit of a step back for the series.

One thing that hasn’t changed, however, is Ironward’s penchant for punishing the player. After I breezed through the first level I was expecting the rest of the game to be similarly boring, leaving me absolutely unprepared for the brutal massacre that followed. See, Solstice Chronicles: MIA is not a game about killing monsters. In fact, you literally won’t be able to kill all the monsters – they spawn infinitely, with a meter at the top showing you the density of monsters at any given moment. As a result, the game’s really more about resource management – stretching our your ammo and supplies long enough to get to the end of a level, and it’s here that the player is forced to make difficult strategic decisions. Do I search this area for supplies, knowing that if I search too long and don’t find anything I’m gonna waste ammo picking off the endless mutant horde? Or do I push forward with what I have, hoping I don’t run into something I can’t handle (like the mighty Behemoth, pictured below.) 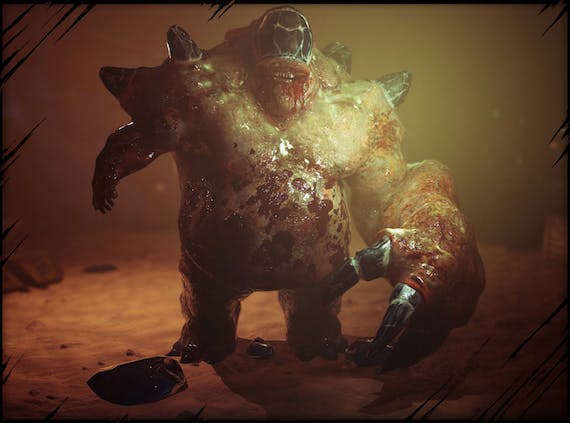 This risk/reward tug-of-war between not running out of ammo and keeping the horde culled is the central focus of MIA and personified by your drone companion, Saffron. The demo showed two of a planned four drone abilities: a supply drop that requires you to defend a specific zone while you wait for her to bring you ammunition and supplies (and also significantly increases the number of monsters on the map), and a shield wall that pushes away and kills everything in a radius around you at the cost of summoning one of the big bads if you use it for too long. These skills become absolutely necessary to surviving MIA’s nightmare world, but they come at such a high cost that if you deploy them at the wrong time it can become too little, too late.

Loadouts are a big part of the game in general, with a wide variety of playstyles determined by your weapons, class abilities, and extra “supply items.” Those supply items are a bit unbalanced – you could take a rocket that pretty much kills anything in one hit, or you could take flares, which are ridiculously hard to aim properly and which will draw monsters to them in a really small radius. Why would you pull them together and waste ammo picking them off when you could just blow them to smithereens? It doesn’t make a lot of sense, especially since both are unlocked at basically the same time.

Other than that minor quibble, I enjoyed the wide array of weapons and abilities. There’s not a ton yet, but everything feels pretty good and serves a clear purpose. I can see how, in the finished product, I could really enjoy trying lots of different loadouts and figuring out how best to maximize my destructive potential.

So did I enjoy my time with Solstice Chronicles: MIA? Difficult to say. I adore the premise of a shooter you can’t shoot your way through, but if it was released in its current state I couldn’t recommend it. The shooting doesn’t feel very satisfying, and controls are really floaty. While the demo was impressively free of technical issues for the most part, aiming was a real challenge both with a mouse and using the right analog stick on a controller (and weirdly, I found the mouse was actually better.) The loadouts don’t yet feel like they have enough depth to allow for a wide array of tactical decisions. What’s more, the three maps I played were all really linear, and didn’t reward exploration much considering that this is a game where scavenging for supplies is supposed to be a major part of gameplay.

Oh, and the voice acting’s bad. Like, really bad. This is gonna be one of the harshest things I’ve ever written, but Saffron’s pitiful performance reminded me of nothing so much as Peter Dinklage’s emotionless turn as the Ghost in Destiny.

And yet, the game has a ton of potential. I can see how, with a little more polish and the addition of a lot more content (both things the developers are promising), this could become as much of an addiction for me as Alien Swarm. And considering Ironward’s track record with the excellent Red Solstice, I’d say they have a greater-than-average chance of delivering on those promises. Is that enough to contribute to the crowdfunding campaign? That’s up to you. For me, I know I’ll definitely be watching Solstice Chronicles: MIA with interest, because this could turn out to be something really special.