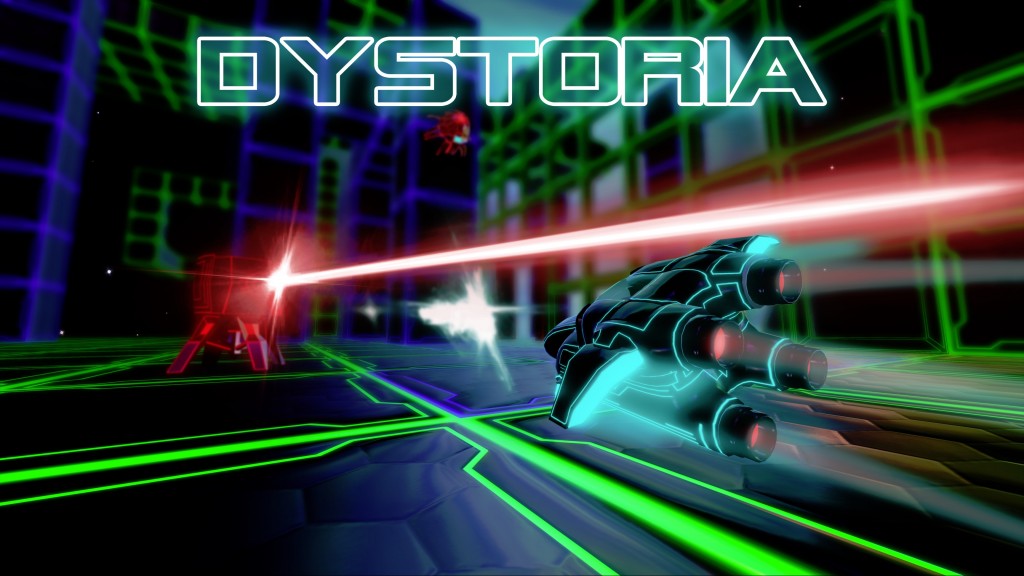 DYSTORIA makes me nostalgic for a time I wasn’t actually alive to see. Probably the single most common phrase indie games use to describe themselves is some variation of “a return to the days of the arcade,” but something about DYSTORIA’s stylish and obviously TRON-inspired presentation really does feel like coming home. What’s more, it’s smart enough to understand how to capture that arcade sense of action and wonder while incorporating modern innovations that make the game a lot more fun and a lot less frustrating.

While I doubt this game will charm people who aren’t already fans of the genre, and while it’s not without its fair share of flaws, DYSTORIA is still a wonderfully charming platformer well worth your attention.

In DYSTORIA, you play as…well, yourself, presumably – an unnamed, ordinary human whose only defined trait is a penchant for videogames, abducted by aliens and placed into a special flight school called “DYSTORIA.” The aliens say that they’re testing the readiness of humans to join galactic civilization, but unsurprisingly, there turns out to be more than meets the eye. The story has elements of Ender’s Game and quite a few 80s sci-fi films, but without ever feeling too derivative. It actually reminded me quite a bit of what Superhot tried and failed to do with its story, presenting a similar tale of simulation got sour, but without the long-winded pretentiousness and interruptions to the flow of gameplay that made the latter such a disappointment in that regard.

In fact, when it comes to presentation in general, DYSTORIA is a masterclass. Other than the opening cutscene taking place on Earth, which is merely passable, the game’s graphics are gorgeous geometric shapes covered in neon lights, like TRON with a budget or TRON Legacy with a soul. At this point, it’s nothing you haven’t seen elsewhere, but the scope of the levels and attention to detail in the art design makes everything feel a little more polished than similar games. Or maybe it just feels better because of how well it’s complemented by the music, an excellent synthwave soundtrack that is honestly 90% of what makes the game so fun to play. And yet, the soundtrack is not currently available for purchase – what’s that all about, Tri-Coastal Games? Allergic to making money? 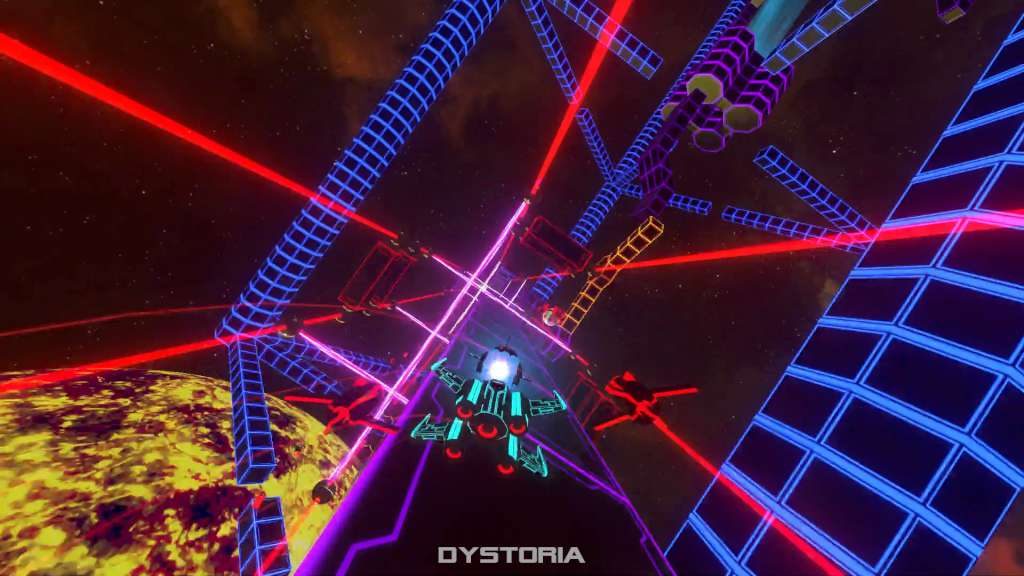 The game itself is a third-person shooter where you pilot a spaceship through a series of geometric 3D levels. There’s elements of puzzle-platforming as well, as navigating each level will require traversing moving platforms, hitting switches, and locating collectibles. Most levels are completed by collecting three orbs to open an exit portal, though some require you to kill every enemy on the map instead. The game’s coolest mechanic is the ability to fly over any surface, in any direction, with the orientation changing with each turn. Not only is this necessary to locate all the orbs and tied nicely into the puzzle-platforming, it complements the shooting as well as you learn to drive up walls and under floors to dodge attacks and get into a better position.

I really like how those strategies are never spelled out for you, leaving you to master shooting on your own. The same’s true of the puzzle mechanics – switches, bombs, etc. are all introduced throughout the game’s campaign in a way that makes sense and without having a patronizing tutorial bring gameplay to a halt to tell you how something works. However, the difficulty curve in general is kind of a mess – a level that took me more than a dozen tries was followed by a bafflingly simple course that was practically a straight line. And while most of the enemies are fine and get steadily more difficult as the game progresses, there’s these annoying little bug-like things that are immensely unpleasant to fight. Their lasers drain your armor and health at a ridiculous rate, and unlike other enemies in the game, they’re not on the same plane as you. This means that, with no way to aim up or down, killing them can be literally impossible, and you’re stuck hoping that they’ll eventually move into position while you watch your health levels plunge faster than Donald Trump’s approval ratings. 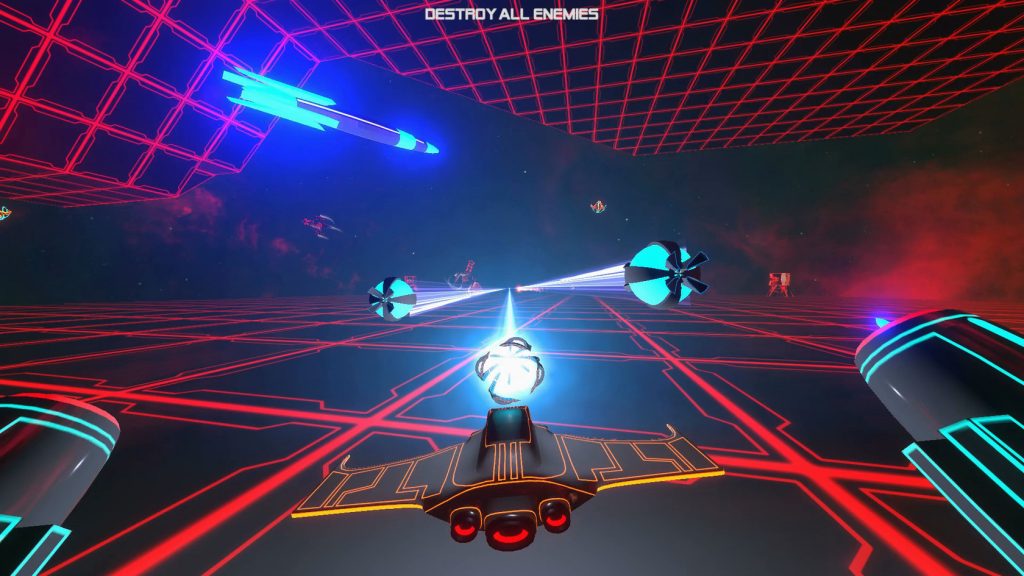 I should also mention the barriers to entry. If you don’t have a controller for your PC (which I know is still true of some of our readers), don’t bother with DYSTORIA, because the keyboard controls are a pain in the butt to deal with. Also, I can’t really recommend this game to those who, like me, are prone to motion sickness. This isn’t something that’s DYSTORIA’s fault, really – everything moves smoothly, and it’s clear that effort has been made to make the rapidly changing camera angles as comfortable as possible – but I still found that I could only play the game for about an hour or so before it became overwhelming. Playing on a larger TV instead of my laptop helped, but still, probably best not to bother if you know that such things are an issue for you.

But for those privileged enough to be able to enjoy the experience, DYSTORIA really is a lovely treat from an unexpected place. Its story is a lot more interesting and well-written than I expected, its graphics are beautiful, its music is incredible, and with lots of collectibles and secrets hidden around the maps, there’s plenty of incentives for replaying levels even after you’ve completed the campaign. The core gameplay might not be quite as flawless as the presentation surrounding it, but it’s still hard not to be impressed by this stylish two-man project. Here’s hoping for more from Tri-Coastal Games in the future.

Full disclosure: This review is based on a review copy of DYSTORIA given to HeyPoorPlayer by the publisher.