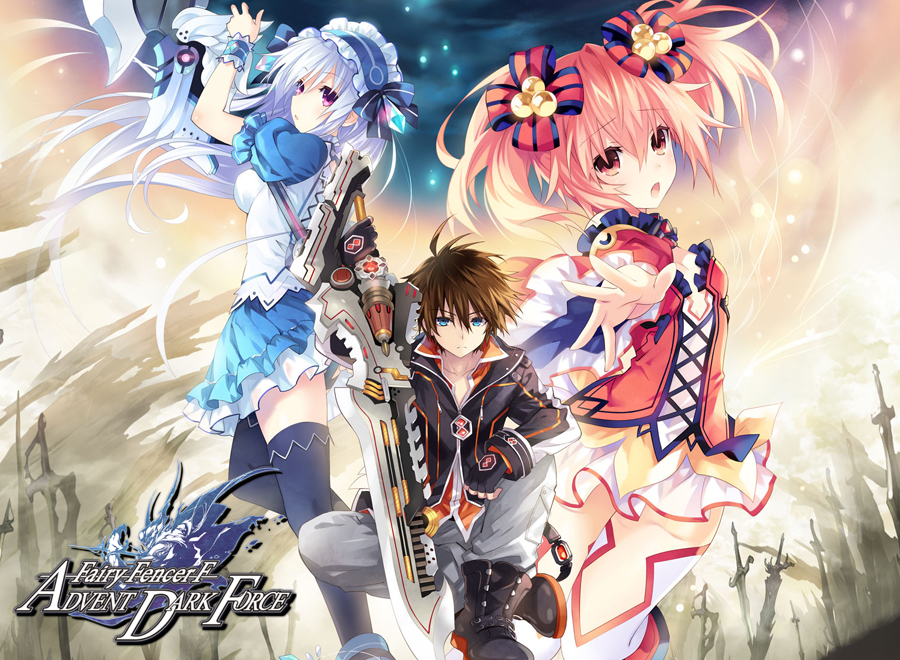 I’m going to tell you something right off the bat; I enjoyed Fairy Fencer F Advent Dark Force quite a bit. I know, I know, it’s a bit backwards for a review, but I feel it an appropriate start for this particular situation. We see plenty of games come out each year labeled as “enhanced editions” of previously-released games but, more often than not, all you’re getting is the main game with a few extra pieces of DLC tacked on and maybe an HD texture pack if you’re lucky. Don’t get me wrong, I buy into stuff like that all the time – I’m just not sure that most re-releases quite match my own personal definition of what truly constitutes a game as “enhanced”. Fairy Fencer F Advent Dark Force, however, does. And, if you’ll stick with me, I’d be more than happy to tell you why.

Did any of you out there think that Fairy Fencer F Advent Dark Force was a sequel to the Fairy Fencer F? If so, don’t feel badly. I did too, originally. But, it’s not! Rather, Advent Dark Force is a remake of the original FFF – albeit a very heavily modified one. In addition to cleaning up the graphics and throwing in some free DLC items, Advent Dark Force re-works combat and a large portion of the story – almost to the point of making it feel like a new game in some instances. 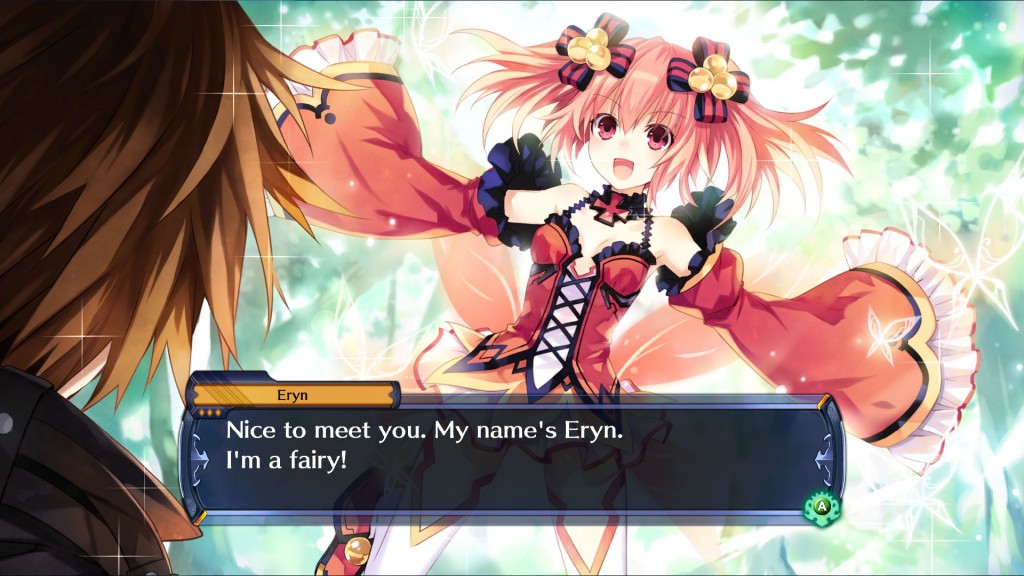 Despite its many changes, Fairy Fencer F Advent Dark Force still starts out in the same way that the original Fairy Fencer F (which shouldn’t be surprising to anyone) – with our perpetually lazy protagonist Fang pulling a magical sword known as a Fury out of the ground in hopes of pawning it off for some food. Upon removing the sword Fang is greeted by Eryn, a being known as a fairy. Eryn explains to Fang that he was destined to pull this particular Fury out of the ground, and by doing so he has officially been recognized as a Fencer – a Fury-wielding warrior whose duty is to roam the lands in search of other Furies. It is Eryn’s hope that, by collecting all 100 Furies, she will be able to resurrect the Goddess – a supreme being of goodness who, after a terrible fight with the Vile God, was sealed away alongside her adversary – and thus Fang (unwillingly) sets out on his journey with Eryn in hopes of making that dream come true. I’m sure that that part of the story feels pretty familiar to those who have played the original Fairy Fencer F, but it doesn’t have to stay that way! Things have the potential to play out differently as the story continues after that, but that all depends on the actions taken by the player.

While it’s possible for Advent Dark Force to play out in the same way that the original Fairy Fencer F did, two alternate paths have bee been added to the game (for a total of three). The path that the player ends up on is determined by their actions regarding a certain event (sorry, I probably shouldn’t spoil it for you) and honestly, it was this additional story content that ended up appealing to me the most. Advent Dark Force certainly isn’t the first remake featuring additional endings that I’ve played, but it’s definitely one of the most in-depth ones. Each path is an entirely different story, comprised of different adventures, enemies, and even a different protagonist in one case. While the original Fairy Fencer F was fun, there was definitely a lack of substance when it came to parts of its plot – it was a little too transparent in some cases. Advent Dark Force‘s branching story feels complete, like what the original Fairy Fencer F should have been, and, although they might have benefited from adding all of this in sooner rather than later, the fact that this much continent was added into the game at all is incredibly impressive. 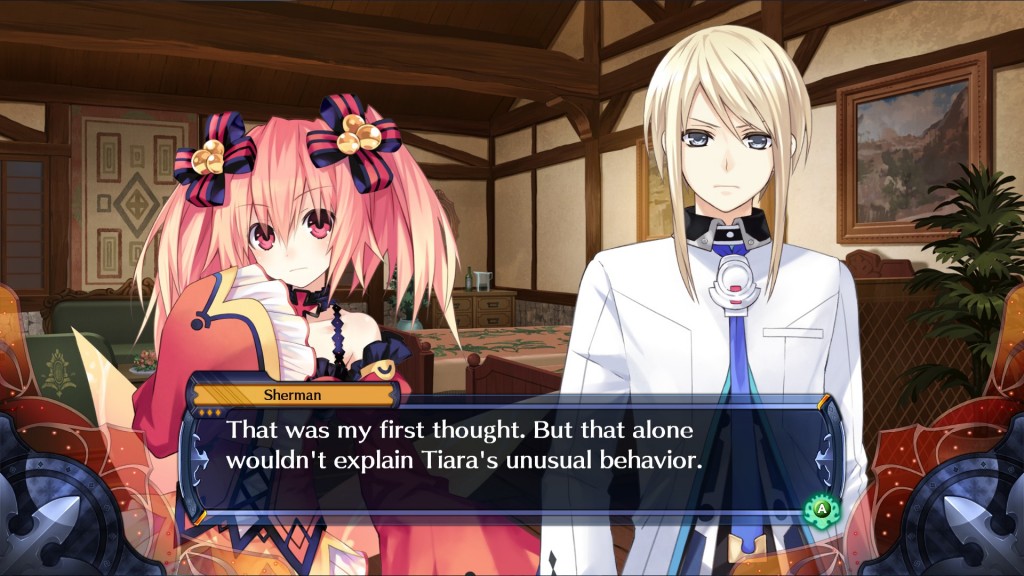 There’s room for more than one protagonist this time around!

Phew, that’s a lot of differences so far! So hey, let’s shake things up by talking about things that aren’t different! That’s exciting, right? No? Well, we’re going to do it anyway. Most of Fairy Fencer F Advent Dark Force‘s core gameplay remains the same. A dungeon-delver at heart, and one almost entirely modeled after the Neptunia series at that, Advent Dark Force will have players braving through a number of dungeons, battling baddies and collecting treasures along the way, as they search for Furies (which, of course, are always all the way in the back – the nerve!). I remember enjoying the dungeons back in the original Fairy Fencer F, and I still do with Advent Dark Force, but I must admit that they aren’t quite as charming as I had previously recalled. Although complex and largely varied from one another, exploration all tended to run together and, at times, I found myself in a hurry to get through the dungeon just so I could get to more of the story – something that I generally never do.

Combat, on the other hand, hasn’t remained entirely the same. The core mechanics are still there; fights are still turn-based, with heavy emphasis being placed on combos and character placement while in battle. The all-important Fairize, an ability which allows Fencers to fuse with their fairies in order to gain a temporary boost in power and access special moves, is back as well. So, where exactly are the differences? Well, with the party size for starters. Advent Dark Force has upgraded the number of characters allowed on the field from three to six, literally doubling your party size. Because of this, enemies have also gotten an upgrade. In order to accommodate the wave of pain coming from bigger and better team, baddies all have increased stats. Overall, I’d have to say that I was pretty impressed with the re-balancing. There’s a very delicate balance of power between players and enemies in RPGs, and it’s an easy thing to break whenever a game gets renovated. The fact that Advent Dark Force got away with doubling the number of active party members that you can use while still making sure that everything flowed well is certainly nothing to sneeze at. On top of that, two new difficulties have been added – the extra-easy “Amateur”, and the extra-tough “Hell” – meaning that players of all skill levels should comfortably be able to head into Advent Dark Force‘s combat. 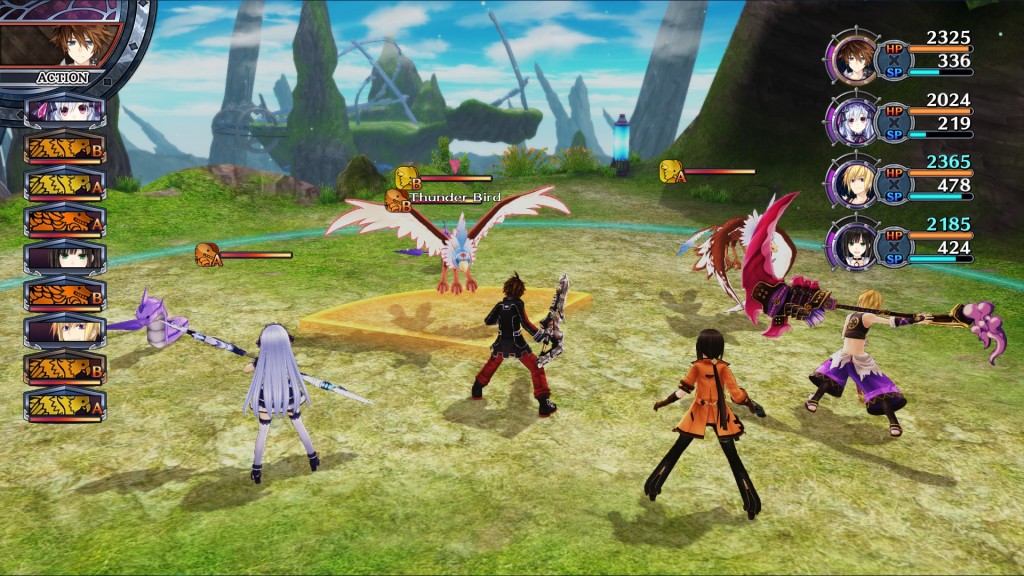 Of course, as with most things, combat did have its hiccups. While Fencers each have special skills that they can utilize in exchange for SP, I remember a pretty generous portion of my combat in Fairy Fencer F revolving around basic attacks. As Fencers grow stronger and accrue WP (Weapon Points) they are able to unlock new basic attacks to fit a variety of situations, and even chain them together. Basic attack combos were essential in Fairy Fencer F because relying to much on skills would sap your SP pretty darn quickly leaving you vulnerable in boss fights – that didn’t seem to be the case in Advent Dark Force. Due to the fact that I generally had 4 – 6 party members, I didn’t have to worry nearly as much about draining their SP. Unless I was out on the field for a long time, someone always had enough SP to allow me to spam skills without putting much effort into strategy  when it came to normal fights – it was even easier once you made enough money to purchase a large stock of SP-recovering items, or had Fencers with SP-recovering abilities. Despite my issues with this though, there’s ultimately only one question that matters; is the combat fun? And to that, I can say yes – it most certainly is.

Advent Dark Force‘s graphics hold up nicely enough, especially considering that the original Fairy Fencer F was released back in 2013. Character and enemy models are generally pretty smooth, and the environments are all quite vibrant and appealing. The 2D character portraits are probably my favorite part of the game visually, however. I’ve always partial to good visual novel cinematics, and Compile Heart has always delivered on that aspect.

I feel like I’ve reviewed several games recently with great voice acting, but a soundtrack that’s just “okay” – and it looks like Advent Dark Force won’t be breaking from that pattern. I was fond of the voice acting back in Fairy Fencer F, and it’s actually grown on me even more since then. Not only does the original voice acting in Advent Dark Force sound great, but all of the new content is high-quality as well – in fact, it’s all so consistent that you really can’t even tell the old apart from the new (and I mean that in the best way possible). Unfortunately, the music was just okay. I didn’t dislike it but, apart from the wonky tuba music that plays during tutorials and music with vocals such as Full Contact, nothing much stood out.

Full disclosure: This review is based on a copy of  Fairy Fencer F Advent Dark Force given to Hey Poor Player by the Publisher. 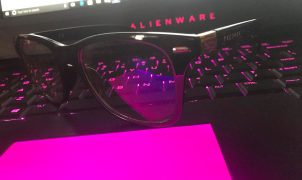