Will you find deliverance in this Game Boy-inspired puzzle game? Though perhaps more well-known for its RPGs and platformers, the original Game Boy was the perfect device for puzzle games. This was evident from the very beginning, with Tetris being one of the system’s bundled titles. Nonetheless, I feel that its true potential as a home to puzzlers was severely underutilized. So, the question beckons, how would puzzle games have evolved on Nintendo’s venerable handheld gaming platform? We have an answer of sorts in the cute little indie title that is Warlock’s Tower.

Warlock’s Tower places players in the role of a mailman named Tim, who has a significantly strong work ethic. Burdened with the weight of the world, Tim has in his possession a letter written by the leaders of humanity, addressed to a rather bitter warlock with apocalyptic aspirations. The letter in question is a written assurance that humanity does indeed acknowledge and appreciate the warlock, which is a last-ditch effort to deter his genocidal ways. The problem is, the warlock is hiding away in a vast tower that is brimming with dark and deadly sorcery. Our dear Tim has to literally risk his life in order to avert the end a world that clearly has never heard of e-mail. Upon first play, you’ll be forgiven for thinking that the game is a Zelda-like affair: graphics are shown from a top-down perspective, with the main character trawling along a series of dungeons. However, the schtick is that our dear Tim loses a life point every time he takes a step in any direction, and he’s given a very limited amount of life at the start of each level. It’s all about traveling from entrance to exit, but finding the ideal way to do so with life remaining is the meat and potatoes of the experience. You can’t reach the goal with zero life remaining; you need at least one point in hand to make it through.

Along the way, Tim collects gems which grant him additional steps. These usually come in increments of 3, with a 5-step variant being slightly more rare. Collecting a new gem will overwrite any steps remaining from the previous gem collected. For example, if you collect a 5-step gem and then immediately grab a 3-step gem, the amount of steps will become 3 instead of combining the totals. This means that a path must be carefully thought out, as there are loads of deceptive routes that will deplete your life despite seeming generous. Players will have to choose between greed and practicality, as well as be prepared to move about with loads of backtracking and taking paths that seem counter-intuitive. Along the way, slight variations to the formula are introduced, as well as assorted enemies to make things a little more colorful. The warlock himself makes the occasional appearance and, oddly enough, offers genuinely good advice. Why Tim doesn’t stop him right there and read the letter is a mystery, but oh well. The new tricks are introduced gradually so as not to overwhelm players, and their functions are easily-understood. Nonetheless, the title remains quite a challenging little chunk of brain teasing goodness; expect to get stuck many times as a particular puzzle’s solution remains elusive. All the same, I can’t say it ever feels unfair or challenging, and the solutions tend to present themselves after a bit of introspection. There’s over 100 levels to get through, so you’ll be wearing your thinking cap for quite some time to come.

Probably the game’s most striking feature is the Game Boy-inspired aesthetic. Eschewing a traditional color palette, Warlock’s Tower embraces a monochrome-like appearance with a four-color selection. But in case you’re worried you’ll get tired of all the sickly greens, fret not: different palettes are introduced as the game wears on, each keeping in line with the original Game Boy’s limitations. The music follows the art direction, being a suitably 8-bit inspired selection of chiptunes that compliment the low-tech vibe perfectly. In fact, I occasionally just left the game running so I could enjoy the audio uninterrupted. It’s a real treat if you’re a fan of the genre.

Warlock’s Tower is a surprisingly deep puzzle game that manages to squeeze a lot of gameplay and cognitive challenge out of an extremely simplistic concept. The Game Boy aesthetic is cute, but fundamentally non-essential: the true charm behind Warlock’s Tower lies in its many nuggets of brain candy. If you’re in the mood to dust the cobwebs out of your mind with some clever puzzles, Warlock’s Tower should rocket to the top of your shopping list. Open the doors to a lengthy obsession by visiting its official Steam page now.

Full disclosure: this review is based on a code for Warlock’s Tower given to Hey Poor Player by the publisher. 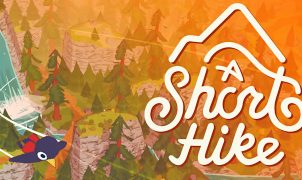 Super Rare Games Gets Lost in Nature with A Short Hike