A little bit of back and forth There are plenty of famous combinations floating around nowadays. Peanut butter and jelly, salt and pepper, the PlayStation Vita and obscure JRPG titles… regardless of what they are, we all know of at least a few pairings that just seem to work well together – or at least try their hardest to! Of course, just because there are plenty of already well-known combinations  doesn’t mean that people will stop trying to create more. Every day, hopefuls form around the world spend their time attempting to combine two previously-unrelated things together in hopes of creating something new and fantastical – and today we have a game resulting from just that! Allow me to present to you… SpiritSphere!

I suppose that, while I did mention that SpiritSphere was a combination of two things, I never specified exactly what they were. To put things simply, SpiritSphere is a combination between The Legend of Zelda and air hockey. I know, I know, that might sound a bit strange, but it’s actually more cohesive than you’d first think. First, let’s take a look at the LoZ-inspired content. The Legend of Zelda aspects that SpiritSphere takes inspiration from aren’t aspects from every little nook and cranny of the series – in fact, they’re really just from one highly specific part. Have I seen this swamp before?

In may Legend of Zelda games, there exist bosses whose battles consist of, either partially or wholly, volleying a ball of energy back forth. This specific boss gimmick is known as “Dead Man’s Volley”, and it is that very same gimmick that SpiritSphere draws upon for its gameplay. Rather than using Dead Man’s Volley as a way to fight a boss, however, SpiritSphere makes it into a sport. SpiritSphere is played on a field, with players hitting a sphere back and forth to one another in hopes of scoring points – and this is where the air hockey aspect of the game comes in! Pretend battles to the death are always more fun with friends.

Of course, there’s a bit more to it than that. Rather than controlling paddle, SpiritSphere has you controlling a character. The game controls are simple and relatively smooth, with players able to move, roll, utilize both normal and power attacks, and even use items like bows and bombs. Have you played a Game Boy Legend of Zelda game? If you have, then I can guarantee that you know how control your character in SpiritSphere.

While SpiritSphere may be inspired by The Legend of Zelda, you can bet that a Link-like character (named “Lin”, in this game) won’t be the only one that you play as. SpiritSphere comes with a tidy little roster of characters – some of which are available from the start, with others needing to be unlocked. Basic controls for each character mostly remain the same, but every playable character comes with unique moves – which can help spice things up a bit. Each of SpiritSphere’s characters have their own strengths and weaknesses, so choose wisely!

SpiritSphere is primarily a couch multiplayer, and can best be enjoyed by grabbing one to three buddies to get in on the sword-swinging, orb-flinging madness. SpiritSphere‘s multiplayer mode features both one-on-one and two-on-two matches – or “Singles” and “Doubles” for you tennis pros out there – and even has a Squash mode, thus offering several ways to play. Players have the option to set up multiplayer matches how they like, with full control being given over the sphere in play, course played on, and number of points needed for victory. Matches usually go by pretty quickly, so you’ll have plenty of chances to play through all of the courses that SpiritSphere has to offer (once you’ve unlocked them, that is!).

Though its main focus is its multiplayer functionality, SpiritSphere also has a single-player mode. Set up as a “campaign” of sorts, players are challenged to 10 back-to-back games, with the first to 3 points winning each game. Opponents, stages, and spheres are randomly selected from your pool of unlocked goodies with more collected unlockables meaning more variation.

SpiritSphere is shaping up to be a nice little game so far, and does a good job of paying homage to the classic Legend of Zelda games which it was modeled after. Although a bit on the smaller side, it does a good job of remaining charming and appealing on several fronts. If you’re looking for a fun and quirky game that doesn’t require you to invest countless hours before getting to the meat and potatoes of the gameplay, or if you just like LoZ-inspired games, consider picking SpiritSphere up when it comes out – although you may want to make sure that you have a friend with you when you do! 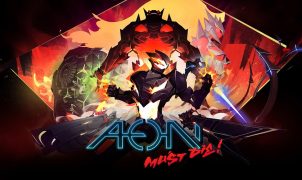 Aeon Must Die Review: The Evolution Of The Beat ‘Em Up   Before we dig into Aeon Must Die, I just want to be clear that yes, we at HPP…